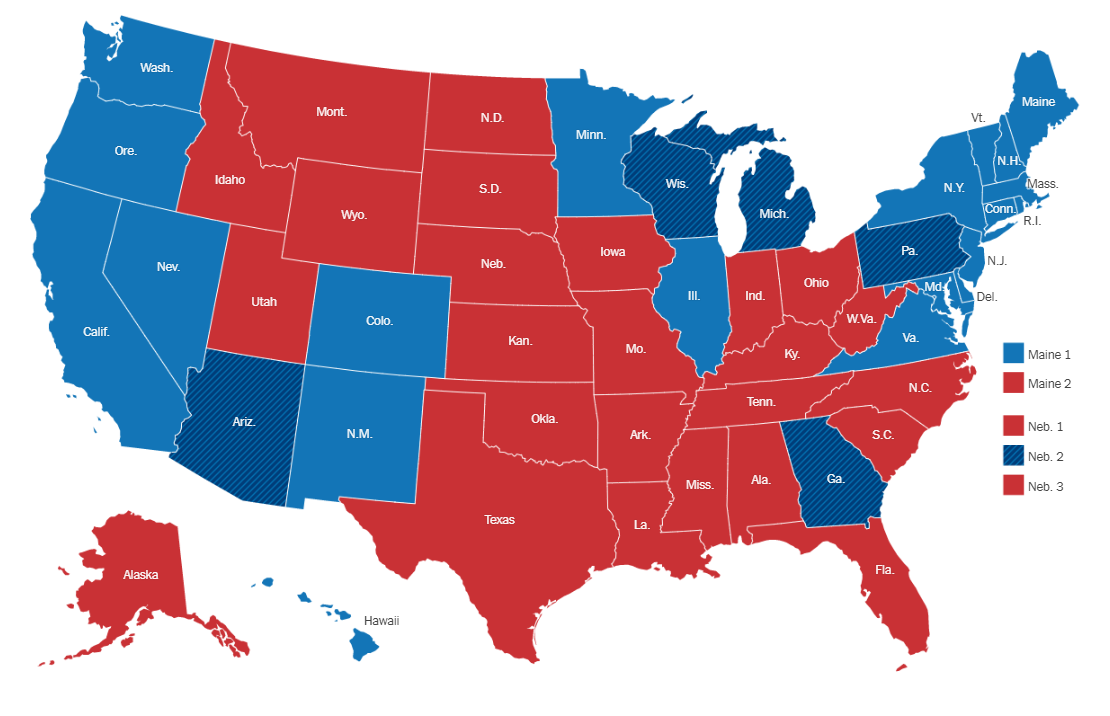 Stuart Rothenberg: “Unlike in 2010 and 2018, when the ‘out-party’ successfully made the midterms ‘about’ the president, Republicans have acted in a way that makes 2022 about them rather than about Biden and House Democrats.”

“Trump has signaled he will inject himself into the midterms — both by challenging incumbent Republican officeholders who have criticized him and by reminding voters that he is the leader of the GOP.”

“That could make 2022 ‘about’ Trump and House Republicans like Florida’s Matt Gaetz, Georgia’s Marjorie Taylor Greene and Colorado’s Lauren Boebert and a handful of other current GOP officeholders and candidates instead of about Biden. That’s hardly an ideal situation for Republicans in next year’s election.”

Politico: “In an unusual move, five of the party’s biggest polling firms have spent the past few months working together to explore what went wrong last year and how it can be fixed. It’s part of an effort to understand why — despite data showing Joe Biden well ahead of former President Donald Trump, and Democrats poised to increase their House majority — the party won the presidency, the Senate and House by extremely narrow margins.”

Said one pollster: “Twenty-twenty was an ‘Oh, s—‘ moment for all of us. And I think that we all kinda quickly came to the point that we need to set our egos aside. We need to get this right.”

New York Times: “But unlike in other states with divided governments, Michigan’s Constitution offers Republicans a rarely used option for circumventing [Gov. Gretchen] Whitmer’s veto. Last month, the state’s Republican chairman told activists that he aimed to do just that — usher new voting restrictions into law using a voter-driven petition process that would bypass the governor’s veto pen.”

Arizona state Rep. Mark Finchem (R) has launched a campaign to be the state’s next secretary of state, “a powerful position that oversees the election system of one of the nation’s most important swing states,” Vice reports.

Finchem was in attendance at the January 6 rally and tweeted a picture of Capitol rioters with the caption: “What happens when the People feel they have been ignored, and Congress refuses to acknowledge rampant fraud. #stopthesteal.”

LOUISIANA 2ND CD — With less than two weeks to go before the all-Democratic April 24 runoff, EMILY’s List has launched what Politico reports is a $341,000 TV buy in support of state Sen. Karen Carter Peterson. This appears to be the first negative TV commercial of the campaign directed against Peterson’s foe, fellow state Sen. Troy Carter, though a pro-Carter PAC recently launched a spot against Peterson. Carter led Peterson by a 36-23 margin during the March 24 all-party primary, but no one has released any polls since then that might indicate whether Carter still has an advantage for the second round of voting.

Both Carter and Peterson are campaigning as ardent Democrats, but Peterson, who would be the first Black woman to represent Louisiana in Congress, is arguing she’s the more liberal of the two. Notably, while Peterson has called for a Green New Deal, Carter merely characterized it as “a good blueprint” that won’t be in place for a long time and that he doesn’t support. Carter, for his part, has insisted he’d have a far easier time working with Republicans than Peterson, who is a former chair of the state Democratic Party.

Carter, as the EMILY ad points out, does indeed have some prominent Republican backers, including Jefferson Parish President Cynthia Lee Sheng. Those GOP supporters could be an asset to Carter if they can help him appeal to the district’s bloc of Republican voters, but only if they don’t cost him Democratic support; EMILY is hoping that its advertising will make it tough for Carter to strike that balance.

Carter is getting some help from American Jobs and Growth PAC, a conservative group that until now has never supported any Democrats. So far the PAC has reported deploying just $21,000, however, and with early voting already underway, it doesn’t have much time left to ramp up its spending if it wants to make an impact.

GEORGIA U.S. SENATOR — The elusive Herschel Walker has finally spoken: The former college and NFL star, long a target of Trump-fueled ardor, said in an interview Sunday on Fox Business that he’s “really considering” a bid for Senate next year but cautioned, “I want to take my time” to make a decision. Added Walker, “[J]ust stay tuned. And I tell you what, it’s going to be exciting.”

Just days ago, however, the Atlanta Journal-Constitution reported that Walker hadn’t “returned the calls of even some senior Republican officials” who’d been trying to gauge the sincerity of his interest, and it’s not clear whether that’s changed. Walker, a Texas resident, also doesn’t appear to have addressed whether he plans to move back to Georgia.

Meanwhile, Republicans finally got their first notable candidate (and one who actually lives in Georgia) when businessman Kelvin King announced a campaign against Democratic Sen. Raphael Warnock on Monday. King is an Air Force veteran and prominent Trump backer, but many bigger names (even setting Walker aside) are still weighing the race on the GOP side.

NEW MEXICO GOVERNOR / 1ST CD — Republican-turned-independent Aubrey Dunn is currently running in the June 1 special election for the House in what he acknowledges is a “long-shot race,” and the former state land commissioner may still cause trouble next year for his old party. Dunn told the Santa Fe New Mexican, “If I lose, I might run for governor as an independent.”

NEW YORK GOVERNOR — Democratic Rep. Tom Suozzi, who was reported to be eyeing a bid for governor, has now spoken publicly on the topic, telling the Wall Street Journal, “I’ve run for governor in the past, and I think I’d be a good governor.” His fellow New Yorkers didn’t quite agree: In 2006, Suozzi ran in the Democratic primary for governor with the vociferous backing of Home Depot founder Ken Langone, who sought payback against then-state Attorney General Eliot Spitzer for his crusade to uproot Wall Street corruption. The gambit utterly failed, as Spitzer crushed Suozzi 82-18.

In a George Costanza-esque bit of self-awareness, though, Suozzi also told the Journal, “Whenever I’ve tried to plan ahead, it never worked out ever. And the things I didn’t plan are the things I ended up being successful at.”

VIRGINIA GOVERNOR — Former Republican Rep. Denver Riggleman has confirmed a recent New York Times report that he’s still thinking about a bid for governor as an independent and says that if he decides to go for it, he’ll make an announcement on June 7, which is a day before the Democratic primary. Republicans, as Digest readers well know, are not holding a primary but will instead pick a nominee at a May 8 “unassembled convention” at 37 different sites that definitely won’t be a balagan.