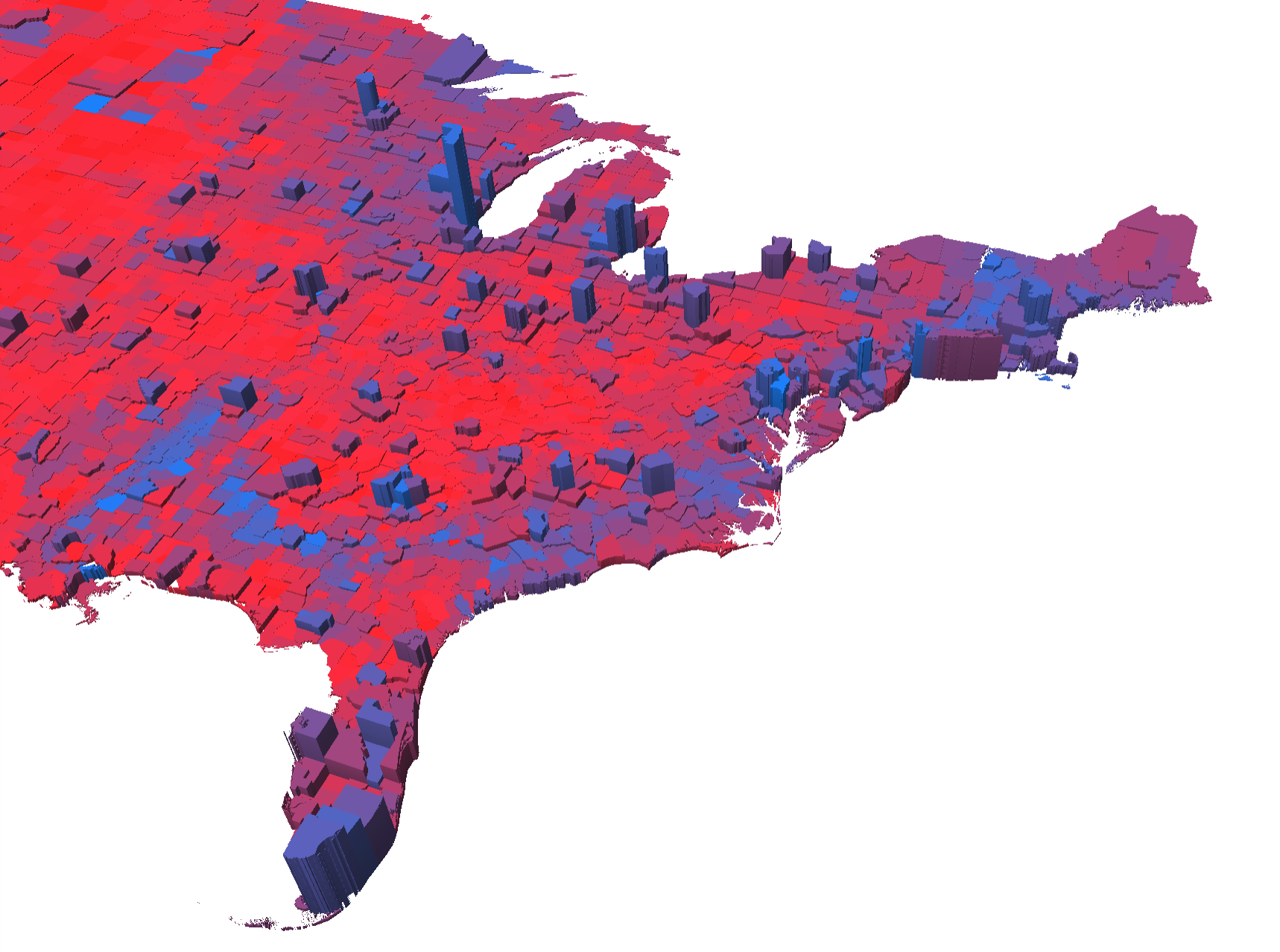 A new Economist/YouGov poll finds that among Americans who say they don’t plan to get the coronavirus vaccine — roughly a quarter of adults surveyed — half say they trust Donald Trump’s advice a lot or somewhat — far more than the advice of the CDC or the country’s top infectious-disease expert Anthony Fauci.

“A new report examining voting access across all 50 states and Washington, D.C., finds that more than 70% of states offer all voters access to a mail ballot and early voting, while 15 others lag in the methods available to cast a ballot,” CBS News reports.

SOUTH CAROLINA U.S. SENATOR — “More than a year and a half ahead of the 2022 general election, a Democratic state lawmaker is mounting a bid to unseat Sen. Tim Scott (R-SC), saying her campaign — with the aim of registering 150,000 new voters across South Carolina — has what it takes to tighten the margin Democrats have struggled to close in statewide elections,” the AP reports.

Said state Rep. Krystle Matthews (D): “This is a true grassroots effort, focusing on voter registration, engagement and mobilization. We’re going to meet and engage as many people as we can, particularly people who haven’t voted in a while.” She added: “This is a doable race.”

“Federal regulators are probing financial reporting discrepancies stemming from an effort to funnel $75 million through state Republican parties to the national GOP effort to reelect Donald Trump,” Axios reports. “It’s not clear mechanically how such large transfers could have taken place without explicit buy-in from state parties ostensibly responsible for them.”

INDIANA 5TH CD — 2020 Democratic nominee Christina Hale told Howey Politics that she wasn’t ruling out a rematch against Republican Victoria Spartz, but added that she’d need to see the new maps after redistricting before deciding. Hale lost 50-46 as Donald Trump was carrying this suburban Indianapolis district by a small 50-48 spread, but Republican legislators will have the opportunity to try to protect Spartz.

SOUTH CAROLINA 1ST CD — Former Democratic Rep. Joe Cunningham, who hadn’t ruled out a comeback bid for South Carolina’s 1st Congressional District, has closed down his federal campaign account, though that’s not necessarily dispositive of his plans. For various technical reasons, candidates often close old accounts and re-open news ones instead. Cunningham, though, also hasn’t closed the door on a gubernatorial bid, so it’s possible this move could indicate a greater interest in state office—or in not running for anything at all.

Kind’s district also voted for Donald Trump twice, supporting him by about 5 points in 2016 and again in 2020, even as Joe Biden improved on Hillary Clinton’s margin nationwide. But while the trends in Wisconsin’s heavily rural and predominantly white 3rd District have not been positive for Democrats, the bigger concern may be redistricting, as Republicans may be able to ram through a map that makes Kind’s seat even redder.

PHILADELPHIA DISTRICT ATTORNEY — Larry Krasner’s 2017 victory in the race for Philadelphia district attorney gave criminal justice reformers an early high-profile win, but he faces a competitive May 18 Democratic primary fight to hold onto his office. Krasner’s opponent is former prosecutor Carlos Vega, who has argued that the incumbent has been running “an experiment that is costing the lives of our children.” The eventual nominee should have no trouble in the November general election in this heavily blue city.

Politico reports that Vega, who was one of the 31 prosecutors whom Krasner fired shortly into his tenure, has avoided “campaigning as a tough-on-crime politician.” Vega instead has argued he can deliver “real progressive reform” and insisted that “we don’t have to choose between safety and reform.” Vega has also blamed the city’s spike in homicides on the district attorney’s policies.

The incumbent, in turn, is framing his contest as a choice between criminal justice reform and “past that echoes with names like [Frank] Rizzo,” the city’s racist late mayor. Krasner is also trying to turn the local Fraternal Order of Police’s support for Vega into a liability by pointing out that the national organization backed Donald Trump last year. Vega, who was the first Latino homicide prosecutor in Pennsylvania, has pushed back, saying it was “really rich” for Krasner to compare him to Trump “when this is coming from a person who’s white, elite, from an Ivy League school.”

One major question looming over the race is whether billionaire philanthropist George Soros, who has in the past donated heavily to groups supporting Krasner and likeminded candidates, will help him again.

Biggs said a few weeks ago that he’d decide by the end of March if he’d challenge Democratic Sen. Mark Kelly, but the month concluded without any public comment from the congressman about his plans. Ducey, by contrast, took his name out of consideration in January, though Senate Minority Leader Mitch McConnell reportedly has been trying to get him to reconsider.

MARYLAND GOVERNOR — Former Prince George’s County Executive Rushern Baker announced Thursday that he would seek the Democratic nomination to succeed termed-out Republican Gov. Larry Hogan. Baker’s decision came as a surprise, as his name had not been mentioned much before he kicked off his second campaign for this office.

Baker, who would be Maryland’s first Black governor, competed in the 2018 primary to take on Hogan, and he attracted the support of almost the entire state party establishment. However, Baker lost by a surprisingly wide 40-29 margin to former NAACP president Ben Jealous, whom Hogan went on to defeat in the general election.

In an interview Thursday with Maryland Matters, Baker acknowledged that his underwhelming fundraising had played a big role in his defeat last time. Baker argued, though, that he was limited at the time by his responsibilities as county executive and local ethics rules restricting how much officeholders could take from developers, which will not be factors for him now.

Baker joins a primary field that already includes state Comptroller Peter Franchot, who has been running for over a year, and former Obama administration official Ashwani Jain, while more could be in before long. Maryland Matters reports that former Attorney General Doug Gansler, who badly lost the 2014 primary for governor, is “expected to announce that he’s running later this month.” Baltimore County Executive John Olszewski “is expected” to decide next month after the county council acts on his proposed budget.

Several other Democrats could also join the field, but it looks like Prince George’s County Executive Angela Alsobrooks will not be one of them. Alsobrooks, who was elected in 2018 to succeed Baker as leader of the state’s second-largest county, said last month that “in this moment I’m running for re-election.”

While Alsobrooks’ statement didn’t quite close the door on a campaign for higher office, Baker said Thursday that he’d only made his decision after talking with her the day before. Baker said he’d spoken to her about the gubernatorial race and added that “[w]e’re genuinely friends” and “our supporters are the same.”

GEORGIA U.S. SENATOR — While Donald Trump generated plenty of chatter about former NFL running back Herschel Walker’s interest in this race last month when he not-tweeted “Run Herschel, run!”, the Atlanta Journal-Constitution reports that Walker himself has remained “silent” about a possible campaign against Democratic Sen. Raphael Warnock. The paper says that Walker, who remains a Texas resident, also “hasn’t returned the calls of even some senior Republican officials trying to ascertain his next move.”

Meanwhile another Republican, banking executive Latham Saddler,  filed paperwork with the FEC on Friday for a potential campaign.

NEVADA U.S. SENATOR — On Thursday, former Republican Gov. Brian Sandoval unambiguously ruled out running against Democratic Sen. Catherine Cortez-Masto. “I have no interest in running and I will not be a candidate” said Sandoval, who now serves as president of the University of Nevada, Reno.