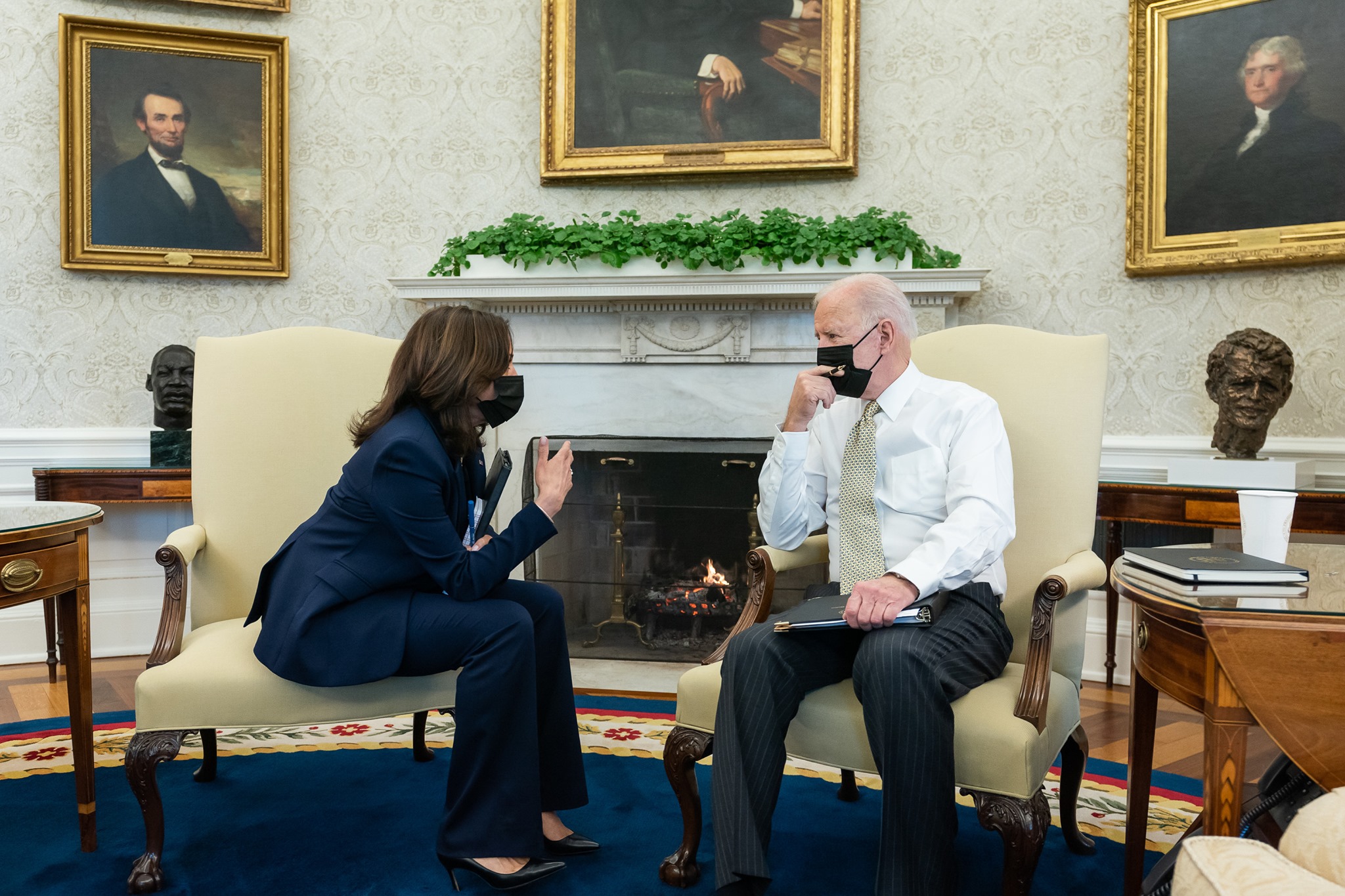 John Anzalone tells Axios his extensive polling and research “has found that few issues receive broader support than raising taxes on corporations and people earning more than $400,000 a year.”

“Anzalone’s view — which he pushed during the campaign, and which the new president’s inner circle seems to share — is that Biden should go on offense on tax hikes.”

“He should make raising taxes on the wealthy and corporations a standout feature of his messaging, rather than a necessary evil to fund his $3 trillion-plus spending plans.”

Over the weekend, Trump called the leader of the Senate Republicans — Mitch McConnell — a “dumb son of a bitch.”

ALASKA U.S. SENATOR — Al Gross, the independent who ran for US Senate in Alaska in 2020 with backing from state and national Democrats and broke fundraising records but lost to Sen. Dan Sullivan (R-AK), told Inside Elections that he is considering another run for the Senate in 2022.

The prominent GOP super PAC Senate Leadership Fund has backed Sen. Lisa Murkowski, who already faces an intra-party challenge from former state cabinet official Kelly Tshibaka. Murkowski, who has not yet announced if she’ll seek re-election, had suggested she might run as an independent back in January, but SLF’s endorsement indicates that party leaders doubt she’ll abandon the party label.

Politico: “Hawley received more than 57,000 donations during the first quarter, according to a person familiar with the totals. He managed to raise nearly $600,000 during the two-and-a-half weeks following the Jan. 6 Capitol riot, despite temporarily halting his fundraising outreach.”

“It represents a massive increase for Hawley. By comparison, he raised just $43,000 during the first quarter of the last election cycle, immediately after taking office. The senator is not up for reelection until 2024, and his totals are unusual for a senator who is not in-cycle.”

KENTUCY U.S. SENATOR — Charles Booker (D) — who narrowly lost the Democratic nomination for U.S. Senate in Kentucky in 2020 — announced in a video that he’s forming an exploratory committee to challenge Sen. Rand Paul (R) in 2022.

“Former President Donald Trump staked his claim to the Republican Party in a closed-door speech to donors Saturday night, casting his populist policies and attack-dog politics as the key to future Republican success,” the AP reports.

“Trump also reinforced his commitment to the GOP in his address, which comes as Republican officials seek to downplay an intraparty feud over Trump’s role in the party, his commitment to GOP fundraising and his plans for 2024.”

NORTH CAROLINA U.S. SENATOR — “With Lara Trump still on the sidelines and landing a new gig on Fox News, Republican candidates are preparing to move on without her,” the Raleigh News and Observer  reports. “Three-term U.S. Rep. Ted Budd (R-NC) is now ‘leaning towards’ running for the Senate seat — an indication that Trump may not enter the race for several months or at all.” Said Club for Growth President David McIntosh, “It would be best if they weren’t both running.”

The only notable Republican in the running right now is Budd’s former colleague, ex-Rep. Mark Walker, though others are eyeing this contest. One Republican who will not be running, though, is state party chair Michael Whatley, who took his name out of contention on Thursday.

“Pat McCrory, the former Republican governor of North Carolina, is planning to launch his campaign for the state’s open Senate seat this week,” Politico reports. “The former governor, who won the office in 2012 and lost reelection in 2016, would begin the primary in the race to replace retiring GOP Sen. Richard Burr as an early frontrunner.”

“During this weekend’s highly anticipated donor retreat hosted by the Republican National Committee in Palm Beach, Ohio Senate candidate Josh Mandel was escorted off the premises while his primary opponent, Jane Timken, was allowed to stay,” Axios reports.

“Nevada’s Republican Party voted to censure the secretary of state, accusing her of failing to fully investigate allegations of fraud in the 2020 election,” the Washington Post reports.

Said Barbara Cegavske, the only Republican statewide office holder in Nevada: “Regrettably, members of my own political party have decided to censure me simply because they are disappointed with the outcome of the 2020 election. While I have been loyal to the Nevada Republican Party during my over two decades as an elected official, I have been unwavering in my commitment to oversee elections and administer Nevada’s election laws in a neutral, nonpartisan manner.”

NEVADA GOVERNOR — Clark County Sheriff Joe Lombardo acknowledged to the Las Vegas Review-Journal on Thursday that he was thinking about seeking the Republican nomination to face Democratic Gov. Steve Sisolak. Rep. Mark Amodei also recently reaffirmed his interest, while former Lt. Gov. Mark Hutchinson has reportedly been considering as well. The paper writes of this group, “The consensus among local Republican political operatives is that the trio is working to reach an agreement on a single candidate to support by the beginning of summer.

FLORIDA GOVERNOR — Wall Street Journal: “Mr. DeSantis has burnished his brand with a Covid-19 response that has enthused the voter base of former President Donald Trump while—in Florida, at least—also impressing the kind of moderate and suburban voters who turned away from Mr. Trump in 2020.”

“As the GOP looks to rebuild after losing the presidential election last year, that formula could give Mr. DeSantis an advantage over rivals who similarly are trying to forge their own path in the shadow of Mr. Trump.” Said DeSantis: “We are an oasis of freedom in a nation that’s suffering in many parts of the country under the yoke of oppressive lockdowns. Florida got it right, and the lockdown states got it wrong.”

New York Times: “Nearly three years and a pandemic later, Mr. DeSantis’s inclination to keep his own counsel and drive hard at reopening Florida has made him perhaps the most recognizable Republican governor in the country and a favorite of the party faithful. In turn, he has become a polarizing leader in the resistance to lengthy pandemic lockdowns, ignoring the advice of some public health experts in ways that have left his state’s residents bitterly divided over the costs and benefits of his actions.”

“Now, with Florida defying many of the gloomy projections of early 2020 and feeling closer to normal as the pandemic continues to dictate daily life in many other big states, Mr. DeSantis, 42, has positioned himself as the head of ‘the free state of Florida’ and as a political heir to former President Donald Trump. Mr. DeSantis owes a mightier debt than most in his party to Mr. Trump, who blessed his candidacy when he was a nobody congressman taking on the staid Florida Republican Party.”

NEW YORK GOVERNOR — Republican Rep. Elise Stefanik’s team on Thursday put out their first statement directly addressing the possibility that she could run for governor, which came hours after her colleague, Lee Zeldin, kicked off his own bid. “Congresswoman Stefanik continues to receive encouragement from all corners of the state as she would immediately be the strongest Republican candidate in both a primary and general gubernatorial election,” said senior advisor Alex DeGrasse, who added that she “is not ruling anything out – nor will she make her decision based on others’ timetables.”

NEW YORK 1ST CD — Suffolk County Legislator Bridget Fleming, who took third in last year’s Democratic primary, filed paperwork with the FEC on Friday for a potential bid to succeed Republican Rep. Lee Zeldin, who is running for governor. Fleming did not immediately announce a bid, though she responded to a tweet the previous day urging her to run by writing, “Stay tuned.”