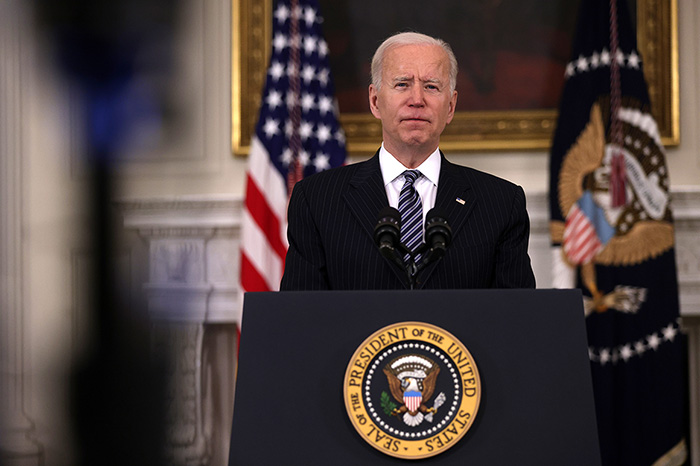 Harry Enten: “The top 10 states on this metric are New Hampshire, New Mexico, South Dakota, Connecticut, Massachusetts, New Jersey, Maine, Vermont, Alaska, and Minnesota and Rhode Island tied. Nearly all of these are states won by President Joe Biden last November, with Alaska and South Dakota as the exceptions.”

Daily Beast: “None of the 16 former senior Trump admin officials, ex-campaign brass, longtime GOP operatives, and sources close to the ex-president contacted by The Daily Beast were willing to defend Gaetz on the record. Not a single one would even do so anonymously.”

“The mere whiff of a scandal once unraveled political careers with stunning speed. Not anymore,” the AP reports.

“Suddenly embroiled in a federal sex trafficking investigation, Rep. Matt Gaetz of Florida has denied the allegations, rebuffed suggestions that he resign and sent fundraising appeals that portray him as a victim of a ‘smear campaign.’”

“The congressman joins a growing list of politicians from both parties — almost exclusively men — who are defying the traditional response to controversy. Rather than humbly step back from public life, they barrel ahead, insisting they did nothing wrong and betting that voters will forget alleged misdeeds once the news cycle eventually shifts.”

Axios: “The Justice Department accuses Jame Kyle Bell, the man behind the Keep America Great Committee, of enlisting a digital fundraising firm to fraudulently appeal to Trump supporters to chip in on behalf of the Trump re-election effort.”

“The Keep America Great Committee’s ads, website, and online donation page were largely copied from those belonging to Trump and other legitimate political groups.”

“None of the nearly $250,000 the KAGC raised actually went to supporting political candidates, prosecutors say. Instead, they say, Bell pocketed the money.”

McConnell released a statement calling Biden’s commission, which will study topics including whether to add more seats to the nation’s highest court, a “direct assault on our nation’s independent judiciary.”

“So far, though, their plea has fallen on deaf ears. Instead, the federal government is sticking to a vaccine-allocation strategy that largely awards doses to states and territories based on their population.”

The Arkansas state House has passed a measure that would allow teachers to ignore a transgender student’s preferred name or gender pronouns, the latest in a series of bills targeting the rights of trans children, the Arkansas Democrat Gazette reports.

It’s one thing to be cruel, but it’s quite another to be cruel to children.

The Guardian: “Republican-controlled states are spending astronomical sums of their taxpayers’ money to buy pharmaceutical drugs from illicit dealers in a desperate and almost certainly unlawful attempt to carry out lethal injection executions.”

“The most jaw-dropping outlay has been made by Arizona, a state in which Republicans hold both chambers of the legislature and the governor’s mansion. A single-page heavily redacted document obtained by the Guardian records that last October the department of corrections ordered 1,000 vials of pentobarbital sodium salt, each containing 1g, to be shipped in ‘unmarked jars and boxes.’”

CBS News: “After more than three decades, a bill that could lead to slavery reparations proposals appears set for a major step forward. The House Judiciary Committee plans to mark up the bill and vote on it Wednesday.”

“If the legislation is reported out of committee, it would set up the first floor vote on the measure since its introduction in 1989.”

“Former Speaker John Boehner, Republican of Ohio, says in a new memoir that he regrets supporting the impeachment of President Bill Clinton, calling it a partisan attack that he now wishes he had repudiated,” the New York Times reports.

Said Boehner: “In my view, Republicans impeached him for one reason and one reason only — because it was strenuously recommended to us by one Tom DeLay. Tom believed that impeaching Clinton would win us all these House seats, would be a big win politically, and he convinced enough of the membership and the G.O.P. base that this was true.”

He added: “I was on board at the time. I won’t pretend otherwise. But I regret it now. I regret that I didn’t fight against it.”

“Trump appointees in the Health and Human Services department last year privately touted their efforts to block or alter scientists’ reports on the coronavirus to more closely align with then-President Donald Trump’s more optimistic messages about the outbreak,” the Washington Post reports.

“The documents provide further insight into how senior Trump officials approached last year’s explosion of coronavirus cases in the United States. Even as career government scientists worked to combat the virus, a cadre of Trump appointees were attempting to blunt the scientists’ messages, edit their findings and equip the president with an alternate set of talking points.”

First Read: “We are still 578 days away from Election Day 2022, but we already have a good idea of what the battle lines will be.”  “Democrats are concentrating on the economy and recovery from the coronavirus pandemic, while Republicans are fixated on the culture wars.”

“And the midterms will be a fascinating political experiment to see what message resonates more with American voters.”

Jacob Finkel: “The Trump presidency may be over, but the Trump era has only just begun—at least when it comes to influence over the nation’s courts. Measured solely by the number of judges he appointed, Donald Trump’s impact is staggering: 234 judges, including 54 powerful appellate judges, almost one out of every three. By comparison, President Barack Obama appointed 172 judges (30 of them appellate) in his first term, while George W. Bush managed 204 (35 appellate).”

“But Trump will have an even greater influence than this measurement suggests. That is because his judges won’t reach the apogee of their power until the early 2040s, when Trump-appointed chief judges are on track to simultaneously sit atop nearly every appeals court in the country.”

Said West: “This is something that was written into the Texas Constitution. Or it was promised to Texas when we became part of the United States of America — that if we voted and decided, we could go back to being our own republic.”

“Experts, however, say that Texas cannot legally secede and leave the United States to become its own republic. The annexation resolution West is referring to stipulates that Texas could, in the future, choose to divide itself into five new states, not divide itself from the US and declare independence.”