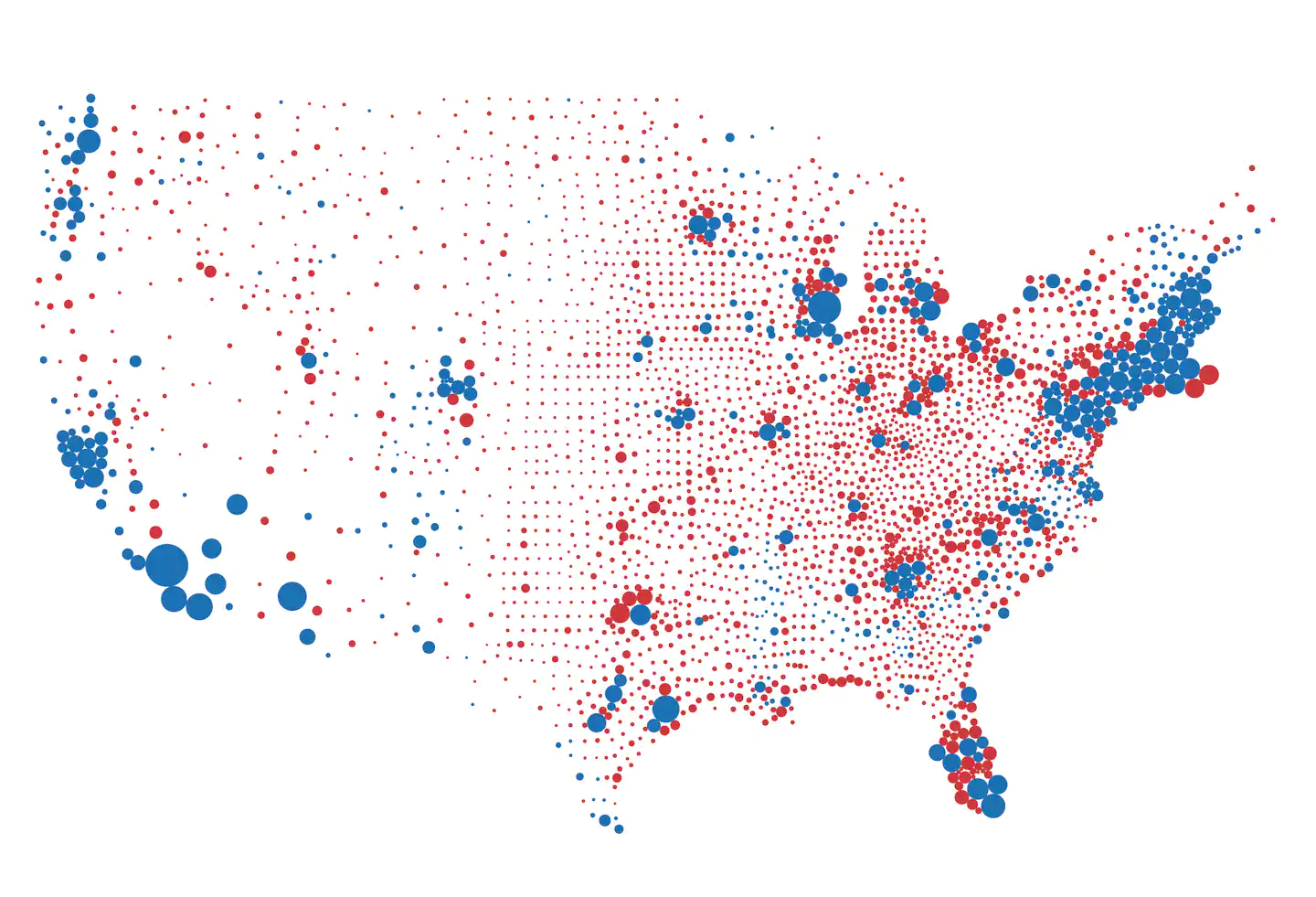 Politico: “In the first three months of the off-year, party recruiters are reporting a surge of enthusiasm from a diverse crop of prospective candidates, including women and people of color. National Republican Congressional Committee leaders have so far talked to 112 recruits in their 47 target districts. But they say they are particularly excited about an uptick in interest from those who served in the military — a trend they think will serve them well in competitive districts.”

Atlanta Journal-Constitution: “Only three months removed from supercharged, nationalized elections, Georgia candidates are already lining up to run for statewide office, the U.S. Senate and congressional seats in 2022, seeking a head start in what will be another tumultuous political season in one of the nation’s premier battleground states.”

“It’s all part of what is quickly becoming a seemingly nonstop campaign season in the country’s newest swing state as Democrats try to build on their upset wins in November and January to capture other statewide seats that have eluded them for more than a decade.”

“John Boehner in a new memoir derides today’s Republican Party as unrecognizable to traditional conservatives like himself, held hostage by both former president Donald Trump and by a conservative media echo chamber that is based on creating ‘chaos’ for its own financial needs,” the Washington Post reports.

New York Times: “[Trump’s] preference for engaging in red-meat political fights rather than governing and policymaking have left party leaders in a state of confusion over what they stand for, even when it comes to business, which was once the business of Republicanism. Yet his single term has made it vividly clear what the far right stands against — and how it intends to go about waging its fights.”

“Having, quite literally, abandoned their traditional party platform last year to accommodate Mr. Trump, Republicans have organized themselves around opposition to the perceived excesses of the left and borrowed his scorched-earth tactics as they do battle… While this approach may not be the political equivalent of a well-balanced meal — a plan for long-term recovery — that does not mean it’s a poor strategy for success in the 2022 elections.”

“JetBlue Airways is the first company to end a pause in PAC contributions following the Jan. 6 Capitol riot and disclose giving to one of the Republican lawmakers objecting to the Electoral College vote count,” Bloomberg reports.

“A $1,000 contribution from the airline’s corporate political action committee to Rep. Nicole Malliotakis (R-NY) was listed in the report filed with the Federal Election Commission on April 5. Malliotakis was among nearly 150 lawmakers who objected to the Electoral College vote certification on Jan. 6.”

“Mike Pence has signed a multimillion-dollar, two-book deal with publisher Simon & Schuster, making him one of the first alums of former President Donald Trump’s inner circle to ink such a lucrative contract,” CNN reports.

“Two people in the publishing industry tell CNN the former vice president’s deal is worth seven figures, somewhere in the range of $3 million to $4 million.”

When Joe Biden left the vice presidency in 2017, he and his wife signed a three-book deal for approximately $8 million.

“Well, these quirks would matter in a system where legislative accomplishments influenced voter behavior. But the preponderance of evidence suggests that Republican voters don’t care about tangible government outcomes.”

“Republican voters—a group distinct from Conservatism Inc.—no longer have any concrete outcomes that they want from government. What they have, instead, is a lifestyle brand.”

VIRGINIA 2ND CD — On Thursday, Republican state Sen. Jen Kiggans filed FEC paperwork for a potential bid against Democratic Rep. Elaine Luria. Kiggans was elected to an open swing seat based in Virginia Beach in 2019 by winning a competitive race 50-49.

FLORIDA 2OTH CD — A special election will take place later this year to succeed Democratic Rep. Alcee Hastings, who died Tuesday at the age of 84, and the field has already begun to develop. This majority Black seat, which is located in the West Palm Beach and Fort Lauderdale areas, supported Joe Biden 77-22 last year, and there’s no question that the winner of the Democratic primary will prevail in the general election.

Hours after Hastings’ death became public on Tuesday, state Sen. Perry Thurston confirmed that he would run to succeed the late congressman, whom he identified as “a mentor, a friend and a fraternity brother.” Thurston is a longtime politician in the Fort Lauderdale area who was elected to the state House in 2006. Thurston ran for attorney general in 2014 and badly lost the primary, but he won a seat in the state Senate two years later.

No other notable Democrats have entered the race yet, but two fellow state senators have acknowledged that they’re considering. Bobby Powell told Politico Tuesday shortly after Hastings’ death, “I am concerned for his family, and I have not made any decision about a Congress run yet.” Shevrin Jones, whose 2020 win made him Florida’s first LGBTQ state senator, said to the Miami Herald, “I believe over the next few weeks there will be a diverse pool of people who will be in that race … No decisions have been made on my end, but it’s going to be interesting.”

Another name to watch is Broward County Commissioner Barbara Sharief, who set up a campaign committee with the FEC back in December but does not appear to have ever publicly expressed interest in this race. Sharief has twice served as county mayor, a largely ceremonial role that rotates among members of the County Commission, which made her both the first Black woman and Muslim to hold the post.

Sharief, who faces term limits in 2022 for her current job, is a longtime intra-party rival of Hastings. In 2014, Hastings backed a primary challenge to Sharief, who responded, “Obviously my working relationship with Alcee is not what I thought it was.” Sharief in turn supported Hastings’ primary opponent, but both incumbents ultimately won easily that year.

P.S. Florida has a resign-to-run law in place that could impact the deliberations of potential candidates. The state requires any state-level elected officials who are seeking federal office to submit an irrevocable resignation at least 10 business days before they file to run if the two positions’ terms overlap.

GEORGIA GOVERNOR — State Sen. Burt Jones and former state Rep. Vernon Jones both say they plan to decide whether to challenge Republican Gov. Brian Kemp in next year’s primary “soon,” in the words of the New York Times. The two Joneses differ in their outlook, though: Burt, a wealthy businessman who was booted as chair of a key committee by fellow Republicans for leading an effort to overturn last year’s election, said that Kemp’s support for Georgia’s new voter suppression bill “has not hurt him among his base,” while Vernon, an ex-Democrat and fanatic Trump supporter who joined the GOP earlier this year, called Kemp’s move “too little, too late.”

NEW YORK 18TH CD — Sophomore Assemblyman Colin Schmitt kicked off a campaign against Democratic Rep. Sean Patrick Maloney on Tuesday, making him the first notable Republican to challenge the current chair of the DCCC. New York’s 18th District, located in the lower Hudson Valley, shifted to the left last year. After backing Donald Trump 49-47 in 2016, it voted for Joe Biden 52-47 in November.

ILLINOIS GOVERNOR / U.S. SENATOR — Former state Senate Minority Leader Bill Brady, who lost a 2010 bid for governor by less than 1 point, says he’s considering another gubernatorial run next year, as well as possible campaigns for Senate or secretary of state. Brady’s fellow Republicans may not be eager to support a comeback, though: His caucus sacked him as leader last year, and Brady resigned soon after.

He also left office with more than $800,000 in his campaign account—money that his colleagues are pissed he did not return to them. Astonishingly, he could even spend some of that money on himself, thanks to an old law repealed more than two decades ago that, due to his long career, still applies to funds he raised back in the 1990s.

Brady unsuccessfully sought the governorship in three consecutive elections, finishing third in the GOP primary in both 2006 and 2014. In between, he fared considerably better, securing the 2010 nomination by less than 200 votes over fellow state Sen. Kirk Dillard.

He then ran a very competitive campaign against Democratic Gov. Pat Quinn, who’d been elevated to the top post after his predecessor, the notorious Rod Blagojevich, had been impeached and removed from office. With discontent over the economy running hot, almost every public poll showed Brady leading, but Quinn prevailed 47-46 thanks to strong turnout in the Chicago area.

NEBRASKA GOVERNOR — University of Nebraska Regent Jim Pillen kicked off a campaign for Nebraska’s open governorship on Thursday, making him the first notable Republican to do so. A much bigger GOP name, though, is now reportedly considering a comeback: former Gov. Dave Heineman, who left office due to term limits in 2015. When asked by NCN reporter Joe Jordan whether he might run, Heineman, who is 72, dodged the question, then agreed with Jordan that his response was “not a no.”

RHODE ISLAND GOVERNOR — Physician Luis Daniel Muñoz, who serves on Rhode Island’s COVID-19 Equity Council, announced Thursday that he would seek the Democratic nomination for governor. Muñoz is the first notable contender to kick off a primary bid against incumbent Dan McKee, who was elevated from lieutenant governor to governor after Gina Raimondo resigned last month to become secretary of commerce.

Muñoz ran for this post in 2018 as an independent against Raimondo and received less than 2% of the vote after a campaign that attracted very little attention. Muñoz’s profile has risen since, then, though, and he’s been active in efforts to increase vaccine access for people of color.

The current version of this suburban Atlanta seat favored Joe Biden 55-44, but the Republican legislature will have the chance to make life difficult for McBath or neighboring Democratic Rep. Carolyn Bourdeaux during the new round of redistricting. The AJC suggests that if the GOP map makers decide to go after Bourdeaux, Earls and other Republicans could run for her seat rather than take on McBath.

MISSISSIPPI 4TH CD — Rep. Steven Palazzo got his first serious Republican primary challenger this week when Jackson County Sheriff Mike Ezell, whose jurisdiction makes up about 20% of this safely red Gulf Coast-based seat, launched his campaign, and Ezell may have company before too long.

The conservative site Y’all Politics contacted several local Republicans to ask them about their interest in taking on Palazzo, who is facing an ethics investigation into charges that he illegally used campaign funds for personal purposes, and a few confirmed they were thinking about it. Mississippi requires a runoff in primaries where no wins a majority, so a crowded primary may not end up aiding the incumbent.

Both state Sen. Brice Wiggins and state Rep. Charles Busby said they were thinking about it, with Wiggins drawing attention to the probe against Palazzo. State Sen. Chris McDaniel, who waged unsuccessful U.S. Senate campaigns in 2014 and 2018, also said he was “not ruling out any race.” McDaniel did consider running against Palazzo back in 2016, but he ended up staying out to focus on aiding Ted Cruz’s failed presidential bid.

Another state senator, Joey Fillingane, didn’t address his plans in his statement to Y’all Politics, though he did call for Palazzo to leave Congress “if the allegations are true.” Public Service Commission Chair Dane Maxwell, meanwhile, said, “I have no plans to run against Congressman Palazzo, but if the seat were to become vacant I would highly consider running.”

Palazzo, for his part, very much sounds like he plans to fight it out. The congressman released a statement following Ezell’s entrance into the race declaring, “I plan to continue to serve as long as the constituents of the fourth district have faith in me to do so.”