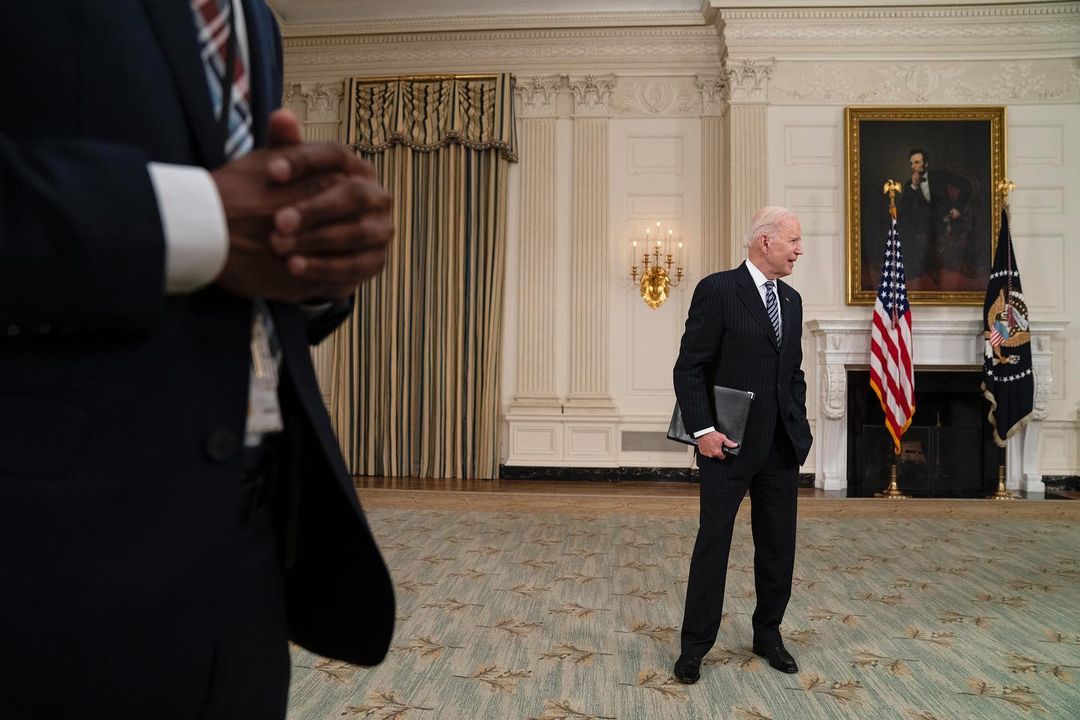 “The Biden administration unveiled its plan to overhaul the corporate tax code on Wednesday, offering an array of proposals that would require large companies to pay higher taxes to help fund the White House’s economic agenda,” the New York Times reports.

“The plan, if enacted, would raise $2.5 trillion in revenue over 15 years. It would do so by ushering in major changes for American companies, which have long embraced quirks in the tax code that allowed them to lower or eliminate their tax liability, often by shifting profits overseas. The plan also includes efforts to help combat climate change, proposing to replace fossil fuel subsidies with tax incentives that promote clean energy production.”

“You have 51 or 52 corporations of the Fortune 500 that haven’t paid a single penny in taxes for three years. Come on, man. Let’s get real.” — President Joe Biden, quoted by Washington Post.

Jonathan Cohn: “Caregiving has gotten more attention generally in recent years, especially from Democrats. The new twist, from Biden, is to place these proposals alongside traditional infrastructure projects as part of a broader economic agenda.”

“But the economic benefits of caregiving initiatives are real. For one thing, caregiving is literally an investment in making individual human beings more productive. This is most obviously the case when it comes to early childhood programs. Research has shown repeatedly that, when infants and toddlers get good care, they are more likely to stay in school, remain employed and stay physically healthier as adults.”

As President Biden moves to raise the corporate tax rate, it seems an odd strategy for Republicans to push away big business.

“My warning, if you will, to corporate America is to stay out of politics. It’s not what you’re designed for. And don’t be intimidated by the left into taking up causes that put you right in the middle of America’s greatest political debates.” — Sen. Mitch McConnell (R-KY), quoted by the New York Times, issuing a warning to corporations.

McConnell’s position now seems to be that campaign donations are free speech, but actual speech is not.

Sen. Mitch McConnell (R-KY) backed off his “warning” that businesses should stay away from politics, the Wall Street Journal reports.  Said McConnell: “I didn’t say that very artfully yesterday.” He clarified that companies are entitled to be involved in politics: “My principle complaint is, they didn’t read the darn bill… There are many states right now after the new Georgia law, that are much more restrictive than the new Georgia law.”

Adam Serwer: “Republicans cannot imagine labor relations as exploitative except in that someone might have to sit through a tedious video on race or gender sensitivity in the workplace. They do not perceive the concentration of corporate power as perilous unless companies’ desire to retain their customer base interferes with Republican schemes to entrench their own political dominance. They see freedom of speech as vital, unless it prevents them from using the state to sanction forms of political expression they oppose. Their criticisms of ‘woke capital’ go no deeper than this.”x

“As such, the Republican anti-corporate turn is entirely superficial.”

One of New York Gov. Andrew Cuomo’s (D) accusers spoke out for the first time to the Albany Times Union about Cuomo groping her at the governor’s mansion.  She said Cuomo’s hand went under her blouse and grabbed her breast over her bra.  She added: “And that wasn’t just a hug. He went for it.”

During the final weeks of President Donald Trump’s administration, Rep. Matt Gaetz asked the White House for a blanket presidential pardon — a request that was ultimately not granted, the New York Times reports.

“Gaetz did not tell White House aides that he was under investigation for potential sex trafficking violations when he made the request. But top White House lawyers and officials viewed the request for a pre-emptive pardon as a nonstarter that would set a bad precedent.”

It’s totally normal to seek a blanket pardon if you haven’t done anything wrong.

Former President Donald Trump offered a 24-word statement: “Congressman Matt Gaetz has never asked me for a pardon. It must also be remembered that he has totally denied the accusations against him.”

Politico: “Biden will direct the administration to begin the process of requiring buyers of so-called ghost guns — homemade or makeshift firearms that lack serial numbers — to undergo background checks.”

“Other executive actions remain unclear. But stakeholders have speculated that the president could announce regulations on concealed assault-style firearms; prohibitions on firearm purchases for those convicted of domestic violence against their partners; and federal guidance on home storage safety measures.”

Washington Post: “Reporters drank lustily from the fire hose of leaks that emanated from the West Wing during the past four years. President Donald Trump’s inexperience and chaotic management style begot West Side Story-level infighting among subordinates, which translated into the drip-drip-drip of insider accounts, sometimes on a near-daily basis. The leaks were pooled into detailed narratives, featuring multiple sources. Despite periodic vows of a crackdown, the leaks ran nearly unplugged for four years, including during Trump’s final, desperate days in office.”

“Since then, the pipeline has gone dry.”

“The Arkansas Legislature has overturned Gov. Asa Hutchinson’s (R) veto of a ban on gender-affirming care for transgender youth, with a majority of both chambers voting to override in largely party-line votes Tuesday afternoon,” the Arkansas Democrat-Gazette reports.

Associated Press: “Hutchinson vetoed the bill following pleas from pediatricians, social workers and the parents of transgender youth who said the measure would harm a community already at risk for depression and suicide.”

Senate parliamentarian Elizabeth MacDonough’s preliminary decision on using budget reconciliation opens the door to potentially giving Democrats the chance to move a total of six pieces of legislation with just 51 votes before the end of this Congress, CNN reports.

But MacDonough has not made her final rulings and Senate Democrats are still undecided on whether they’ll use the new flexibility.

Wall Street Journal: “But even if Democrats can employ the process more frequently, measures passed through reconciliation will still need to comply with a number of Senate rules, including that they have a direct impact on the budget.”

Roll Call: “It’s far from certain that any immigration provisions could make it into another parliamentarian-approved reconciliation bill, and the comprehensive overhaul of the immigration system backed by the White House is even less likely.”

Said Pelosi: “We think we can make a case about the budget impacts of immigration in our country, and we are going to try to do that.”

A senior staffer to Sen. Dianne Feinstein (D-CA) told the Los Angeles Times the senator would support circumventing the long-standing filibuster rule to enact a voting rights bill with only 50 votes in the Senate.

Feinstein state director Jim Lazarus said she “believes that the leadership of the Senate will come up with a path that allows this bill to go forward” with 50 Democratic votes and she “will make this the No. 1 bill that has to get through over the next month or two.”

Writes Boehner: “I’ll admit I wasn’t prepared for what came after the election — Trump refusing to accept the results and stoking the flames of conspiracy that turned into violence in the seat of our democracy, the building over which I once presided.”

He added: “Watching it was scary, and sad. It should have been a wake-up call for a return to Republican sanity… Whatever they end up doing, or not doing, none of it will compare to one of the lowest points of American democracy that we lived through in January 2021.”

“President Joe Biden’s sprawling infrastructure plan doesn’t just attempt to turn decades-old progressive policy pursuits into law. Aides and operatives inside and out of the White House are coming to view it as an ambitious political play to cement, and even expand, the coalition of voters that delivered Democrats to power in November,” Politico reports.

Politico: “President Joe Biden has been a conspicuous outlier among Democrats when it comes to supporting marijuana legalization. But Schumer said Biden’s reticence won’t deter the Senate from taking aggressive action to loosen federal restrictions.”

Said Schumer: “I want to make my arguments to him, as many other advocates will. But at some point we’re going to move forward, period.”

The San Francisco Chronicle “analyzed vaccination rates for all 58 of California’s counties, then looked at how they correlated with two different factors: the county’s median income and the share of the two-party vote that went to President Joe Biden in the 2020 election.”

“We found that political leanings were more important than income. The percentage of Biden voters explained nearly a third of the difference in vaccination rates between counties, while median household income accounted for just over 20%.”

“Justice Stephen Breyer rejected the characterization of the U.S. Supreme Court as ‘conservative,’ pointing to its decision to stay out of the 2020 presidential election fray as evidence that the court doesn’t operate as a political body.” Bloomberg reports.

Politico: “Unlike Barack Obama and Donald Trump, Biden hasn’t named a special envoy to focus on the Israeli-Palestinian portfolio. Unlike Bill Clinton, Biden has no plans for any sort of peace conference, or even a peace process, anytime soon. Biden’s closest antecedent may be George W. Bush, who initially resisted engaging with the issue — but eventually found he couldn’t ignore it.”

“Aside from taking a few small steps to reorient the U.S. position away from the heavily pro-Israel tilt it took under Trump — including restoring some modest aid to the Palestinians — Biden and his team are signaling that the conflict is simply not a priority.”

The United States and its allies were considering a joint boycott of the 2022 Winter Olympics in Beijing, CNBC reports. But “the State Department denied Tuesday evening that it was considering a joint boycott alongside allies of the 2022 Winter Olympics in Beijing.” There’s currently very little upside, political or diplomatic, to boycotting the Olympics.

“The American military is warning that China is probably accelerating its timetable for capturing control of Taiwan, the island democracy that has been the chief source of tension between Washington and Beijing for decades and is widely seen as the most likely trigger for a potentially catastrophic U.S.-China war,” the AP reports.

It’s not hard to imagine this developing into a modern day Cuban Missile Crisis scenario for President Biden.

Alexei Navalny, the most prominent opponent of Russian president Vladimir Putin, is “seriously ill” in prison after contracting symptoms of a respiratory illness in prison, the Financial Times reports.  Meanwhile, Reuters reports Amnesty International says Navalny is incarcerated in conditions that amount to torture and may slowly be killing him.

I never understood why Navalny returned to Russia from Germany after being poisoned. This was entirely predictable.