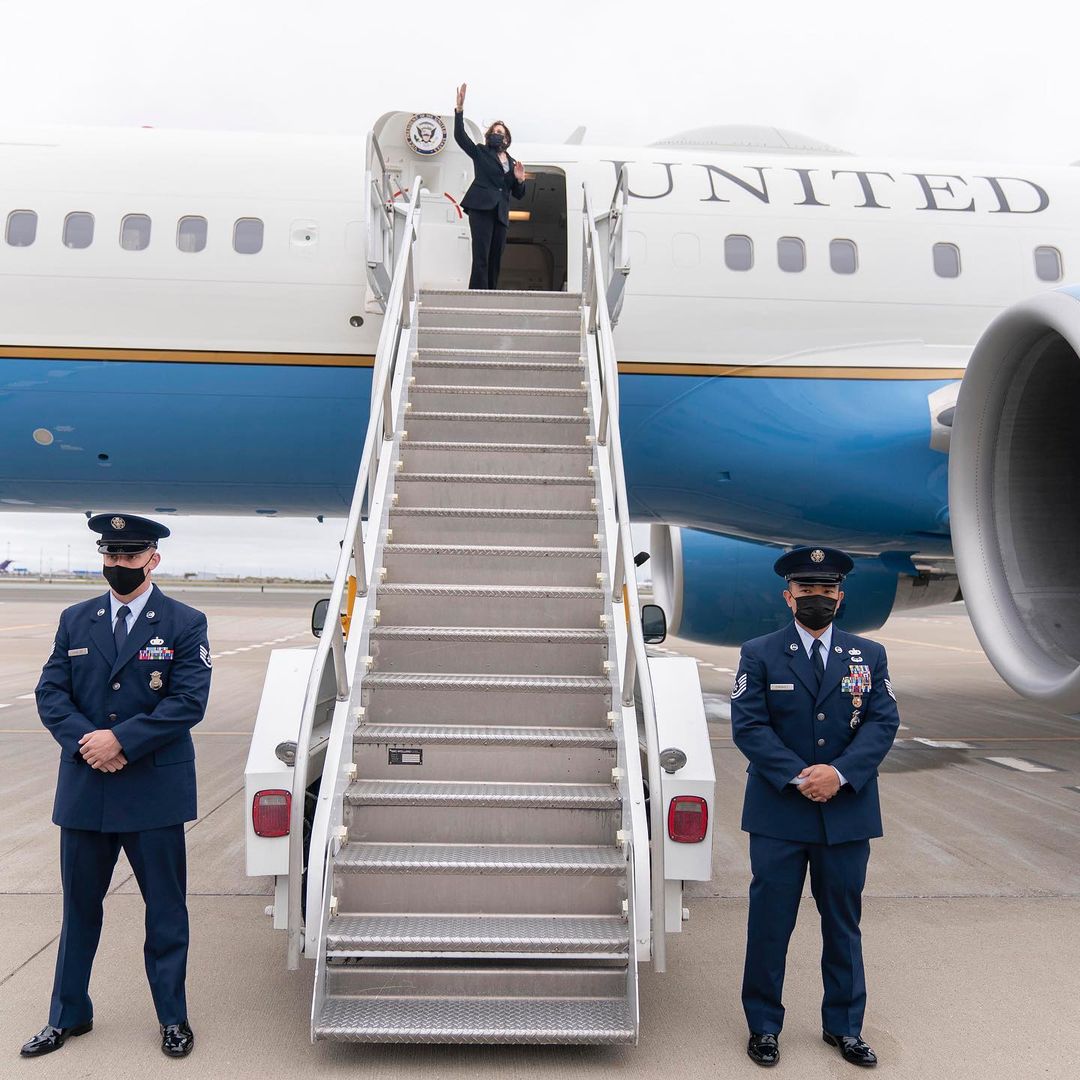 If you’re looking for evidence that Democratic-leaning voters are still fired up even with Trump out of office, this is a good data point.

“That eye-popping haul came from over 100,000 individual donors, for an average donation of $32. Greene did not self-fund this quarter… That is a staggering sum of money for a House member, especially for a freshman who is more than a year out from her next election.”

The downside for Democrats of removing Greene from her committee assignments is that she’s got nothing else to do but raise money.

LOUISIANA 2ND CD — A newly created PAC named Progress for the People has begun a “six-figure ad buy” against state Sen. Karen Carter Peterson ahead of the April 24 all-Democratic runoff. This appears to be the first negative TV spot of the runoff, though Peterson’s opponent, fellow state Sen. Troy Carter, went up with a spot directed against her just ahead of last month’s all-party primary.

The PAC’s commercial declares that Peterson accepted her taxpayer funded salary even though she “missed 85% of her votes in the legislature last year,” including on “COVID guidelines, voting rights, [and] gun safety.” Peterson said at the time that she didn’t feel safe going to the Capitol in the early months of the pandemic, and she put out a statement this month blaming the legislature’s GOP leaders for rejecting her call “for a mask mandate and social distancing to protect the hardworking staff at the Capitol.”

MICHIGAN 6TH CD — Freshman state Rep. Steve Carra, who late last month posted on social media that “[i]t’s time to replace Fred Upton with a proven conservative,” says he’s kicking off a campaign this week. He’s by no means the only Republican elected official gunning for Upton over his vote to impeach Donald Trump, though: Berrien County Commissioner Ezra Scott, who expressed interest in a primary challenge in January, has now filed paperwork with the FEC, though he hasn’t launched a bid yet.

NEW YORK GOVERNOR — Andrew Giuliani, a former top Trump aide and son of Rudy Giuliani, is “heavily considering” a bid for governor of New York in 2022, the Washington Examiner reports.

OHIO 12TH CD / U.S. SENATOR / GOVERNOR — Turns out it’s door number three for Franklin County Recorder Danny O’Connor: The central Ohio Democrat, who’d previously been considering bids for Senate or statewide executive office, will instead wage another campaign for the House. O’Connor narrowly lost two competitive races for the 12th Congressional District to Republican Troy Balderson in 2018—a special election and then, not long after, the November general election—though redistricting could pit him against someone else.

It doesn’t sound, however, as though he’d challenge Rep. Joyce Beatty, a fellow Columbus-area Democrat whom he called “a champion for working families” and suggested was someone (along with Sen. Sherrod Brown) he’d want to emulate in Congress. O’Connor could, though, wind up facing off against Balderson’s 2020 opponent, businesswoman Alaina Shearer, who said last month that she’s running again but plans to re-evaluate once a new map is in place.

NEW YORK 23RD CD — Several more Republicans are talking about bids to succeed GOP Rep. Tom Reed, who recently announced his retirement after a lobbyist accused him of sexual misconduct. The newest names are Steuben County Republican Party Chairman Joe Sempolinski and businessman Matthew Burr, who both say they’re considering the race. In addition, Chemung County Executive Chris Moss reiterated that he’s looking at the contest, but added that he wants to wait to see how redistricting unfolds. Moss said that for now, he plans to seek re-election to his current post next year.

TENNESSEE 5TH CD — On Monday, community activist Odessa Kelly launched a primary challenge against longtime Democratic Rep. Jim Cooper, a member of the conservative Blue Dog Coalition who survived a primary last year by an underwhelming 57-40 margin. Kelly charged Cooper with failing to do enough for the city of Nashville, where Tennessee’s 5th District is based, during his “decades in Congress,” and identified Medicare for All and the Green New Deal as her top priorities.

If elected, Kelly would be the first Black woman to serve in the House from the Volunteer State and also the first openly gay Black woman in Congress. (It was only after she died in 1996 that news accounts identified legendary Texas Rep. Barbara Jordan as a lesbian; she never discussed her sexuality during her lifetime.) However, Tennessee Republicans could chop up Nashville in the coming round of redistricting, dividing it between the dark red surrounding districts to create another safe seat for the GOP.

WASHINGTON 4TH CD — Businessman and Navy veteran Jerrod Sessler is the latest Republican to launch a challenge to GOP Rep. Dan Newhouse, one of 10 House Republicans who voted to impeach Donald Trump. He also describes himself as a “former NASCAR driver,” but his competitive involvement was limited to local competitions that could be considered the equivalent of baseball’s minor leagues, and his name does not come up when searching the auto sports database Racing-Reference.

There were no surprises on either side in the gubernatorial contest. While there has been some speculation over the last few years that Democratic Gov. Phil Murphy could draw a serious intra-party foe, only two perennial candidates ended up filing to take him on.

On the GOP side, former Assemblyman Jack Ciattarelli has looked like the heavy frontrunner ever since former state party chair Doug Steinhardt abruptly dropped out in January. While Ciattarelli lost the 2017 primary to then-Lt. Gov. Kim Guadagno 47-31, he has the backing of the state’s powerful county party leaders for his second campaign.

The rest of the field consists of former Somerset County Commissioner Brian Levine, pastor Phil Rizzo, and perennial candidate Hirsh Singh (aka the guy who once filed an official financial disclosure that included a “;-)” wink emoticon), but none of them appear to have gained any serious traction.

New Jersey supported Joe Biden 57-41, and it will be very difficult for Republicans to deny Murphy a second term. We haven’t seen any horserace polls here all year, but a recent Stockton University survey gave Murphy a strong 58-36 approval rating.

NEVADA GOVERNOR — North Las Vegas Mayor John Lee, who just the other day didn’t rule out switching parties to run for governor as a Republican, has now … switched parties. There’s no word yet as to whether Lee will fulfill the second part of this prophecy, though it’s not a surprise to see him change sides: During a long career in the legislature, he compiled a consistently conservative record, so much so that he got blasted almost two-to-one by a badly underfunded opponent in his 2012 primary, ending his service in the state Senate.

Lee bounced back the following year by defeating the incumbent mayor of North Las Vegas, the fourth largest city in the state, and won re-election in 2017. However, he’s repeatedly eyed bids for higher office but never taken the plunge. In 2011, he briefly ran for Nevada’s then-new 4th Congressional District but bailed after a few months only to get thumped in his re-election bid. He also looked at the seat in the 2016 cycle and the 2018 cycle but passed both times.

All of those dalliances came when Lee was a Democrat, and of course there’s no telling whether his new party will embrace him, though Lee was sure to say he’d voted for Donald Trump twice in a press release announcing his latest move.

CALIFORNIA 25TH CD — Simi Valley City Councilwoman Ruth Luevanos announced a bid against Republican Rep. Mike Garcia in California’s 25th Congressional District on Tuesday, making her the second notable Democrat after former Assemblywoman Christy Smith to do so. Luevanos, the daughter of immigrants from Mexico, was the first Latina elected to the City Council in 2018 and emphasized her background as a union leader and teacher in her campaign kickoff. (Simi Valley, a city of 125,000, might be best known as the home of the Ronald Reagan Presidential Library.)

NEW MEXICO 1ST CD — State Rep. Melanie Stansbury, the newly minted Democratic nominee in the June 1 special election for New Mexico’s 1st Congressional District, has released her first TV ad of the race, a generic introductory spot in which she touts her local roots and says she knows “what it’s like to not know how you’re going to make it to the end of the month.”

VIRGINIA 1ST CD — Democrat Stewart Navarre, a retired Marine colonel and former pharmaceutical businessman, kicked off a campaign on Tuesday against veteran Republican Rep. Rob Wittman in Virginia’s 1st Congressional District. Wittman’s seat, which stretches along the Chesapeake Bay from the Washington, D.C. exurbs to the outskirts of the Richmond area, has been solidly red for many decades, but it moved sharply to the left last year: While Donald Trump carried it 54-41 in 2016, he prevailed just 51-47 last year.

If a similar district remains in place following the upcoming round of redistricting and the same trends continue, Democrats could therefore make a play. The region also has a large military presence, which could make Navarre’s profile a good fit. Wittman, however, has never won an election by less than double digits and defeated Democrat Qasim Reed 58-42, one of the best performances by a Republican compared to the top of the ticket in 2020.