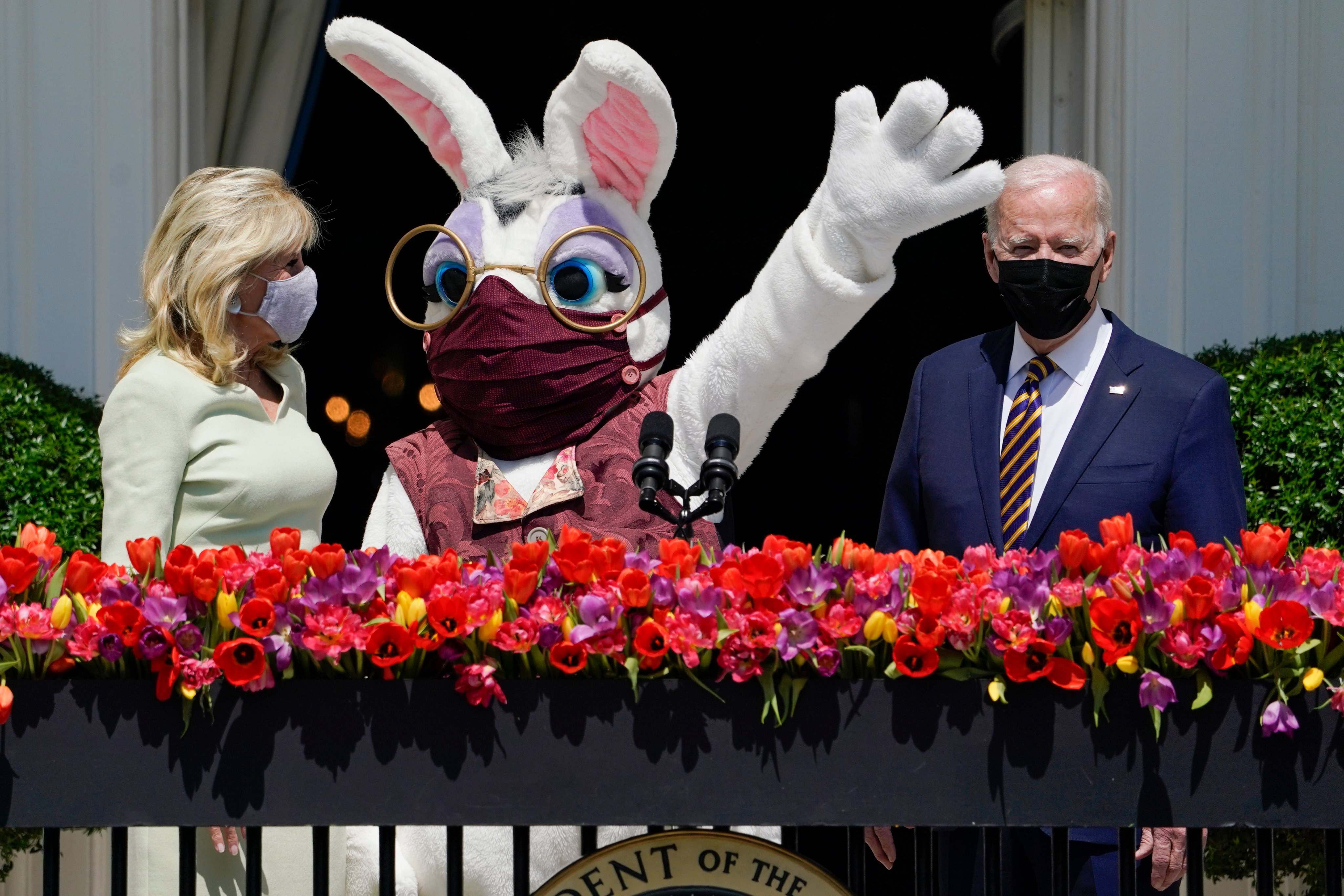 Sen. Joe Manchin (D-WV) said President Biden’s $2.25 trillion infrastructure proposal needs changes and raising the corporate tax rate to 28% goes too far, but he would support raising it to 25%, The Hill reports.

Said Manchin: “It’s more than just me. There’s six or seven other Democrats who feel very strongly about this. We have to be competitive, and we’re not going to throw caution to the wind.”

Also interesting, from Bloomberg: “Manchin said the bill may be broken up into three different bills in order to pass.”

Wall Street Journal: “President Biden’s proposed tax increases on corporations as part of a $2.3 trillion infrastructure plan have drawn a skeptical reaction from some Democrats, who instead favor borrowing money to pay for the investments or raising other levies, like the gasoline tax, to do so.”

“Rep. Peter DeFazio (D-OR), the chairman of the House Transportation and Infrastructure Committee, said he didn’t think paying for the full cost of the plan through tax increases was necessary.”

Washington Post: “Biden and Democrats have touted the support of Republican voters and independents in forging ahead with sweeping new proposals that could transform the American economy and reverse a decades-long national aversion to increased domestic spending, and early polling shows some Republican approval of their efforts.”

“But any window for cooperation appears to have already closed for Republicans in Congress — and it may be closing for GOP voters, as well. Interviews with dozens of voters in three swing congressional districts across the country revealed evidence that attacks on the spending push are beginning to take hold, and congressional Republicans said they are well positioned to capitalize on voter doubts and win their way back to power in 2022.”

Politico: “The massive outreach campaign comes as the Biden administration attempts to move a behemoth spending package across the goal line, just weeks after winning approval from Congress for its $1.9 trillion Covid-19 relief package.”

“As one person close to the White House put it, in their mind, Republicans will be viewed as ‘profoundly out of touch’ if they don’t get on board with backing the next round of spending. … Part of the sales pitch to Americans will be an appeal to suburban women, who have been particularly battered by the pandemic, leaving the workforce in droves and often carrying the burden of caretaking amid schools and childcare center closures.”

He added: “Obviously Democrats have figured out that infrastructure is something we need and something that’s popular and so they’re trying to take 70 percent of this bill and call it infrastructure in a new way than we’ve ever talked about infrastructure before — and that means you’re looking at another partisan package just like we had with Covid.”

Jonathan Chait: “So we’re stuck. It’s not just that Republicans are creating a clever logic game to rule out a popular Biden proposal. They are genuinely unable to put together a big infrastructure bill. President Trump was extremely eager to sign such a bill, but Republicans in Congress foundered on the question of how to pay for it, and they also wouldn’t pay for it with deficit spending…”

“If Republicans weren’t able to figure out a way around this problem under Trump, the prospect of Joe Biden signing a huge popular bill is not going to incentivize them.”

“If anything could bring them to the table, it’s Democrats threatening to finance the bill by taxing rich people, then allowing Republicans to negotiate that away (and being willing to accept debt financing rather than harming one hair on the heads of the precious, fragile job creators.)”

“In the meantime, they’re going to oppose any infrastructure bill that’s paid for, and any bill that isn’t.”

NBC News: “The shift is the product of a Republican Party increasingly driven by ‘culture war’ issues that animate a base invigorated by Trump and corporate powerhouses that are under more pressure than ever to align themselves with the left on voting rights, LGBTQ rights and anti-racist efforts.”

“The result is a fraying in relations between a GOP that has for years advocated for the kinds of libertarian economic policies that have widely benefited these businesses and companies that are using their might to help advance racial and social justice causes.”

Texas Gov. Greg Abbott (R) informed the Texas Rangers that he would no longer be throwing out the ceremonial first pitch at their home opener tonight. Said Abbott: “I will not participate in an event held by MLB, and the State will not seek to host the All-Star Game or any other MLB special events.”

Former President Obama praised Major League Baseball for moving its All-Star Game out of Atlanta due to Georgia’s new law curbing voting access, Axios reports. Said Obama: “Congratulations to @MLB for taking a stand on behalf of voting rights for all citizens. There’s no better way for America’s pastime to honor the great Hank Aaron, who always led by example.”

“A group of GOP state legislators in Georgia are seeking removal of Coca-Cola products from their offices after the company’s CEO criticized the state’s recently passed voting law,” The Hill reports.

Arkansas Gov. Asa Hutchinson (R) announced he vetoed a bill that would ban gender-affirming care for transgender youth because it “interfered with the relationship between doctors and patients,” the Arkansas Democrat-Gazette reports.

He also called the bill a “vast government overreach” and a “product of the cultural war in America.”

Washington Post: “The bill, which is part of a wave of similar legislation across the country, would have banned doctors from providing transgender minors with gender-affirming treatments such as puberty blockers, hormone therapies and transition-related surgeries, or referring them for such treatments. Republican lawmakers in at least 17 other states have introduced similar bans on medical treatments for transgender minors, despite opposition from major pediatric and psychiatric organizations.”

“The Supreme Court on Monday dismissed a case over former President Donald Trump’s efforts to block critics from his personal Twitter account,” the AP reports. “The court said there was nothing left to the case after Trump was permanently suspended from Twitter and ended his presidential term in January.”

Adam Liptak: “The Supreme Court has become far more likely to rule in favor of religious rights in recent years, according to a new study that considered 70 years of data.”

“The study, to be published in The Supreme Court Review, documented a 35-percentage-point increase in the rate of rulings in favor of religion in orally argued cases, culminating in an 81 percent success rate in the court led by Chief Justice John G. Roberts Jr.”

New York Times: “The deeply held spiritual convictions or counterfactual arguments may vary. But across white evangelical America, reasons not to get vaccinated have spread as quickly as the virus that public health officials are hoping to overcome through herd immunity.”

“The opposition is rooted in a mix of religious faith and a longstanding wariness of mainstream science, and it is fueled by broader cultural distrust of institutions and gravitation to online conspiracy theories. The sheer size of the community poses a major problem for the country’s ability to recover from a pandemic that has resulted in the deaths of half a million Americans. And evangelical ideas and instincts have a way of spreading, even internationally.”

“Lawmakers on Capitol Hill say Congress has little role to play in fixing the border crisis, arguing the responsibility falls largely on President Biden and federal agencies,” The Hill reports.

“While most members say they’ll provide more resources if the president asks, they also point out that there’s not much they can do on the legislative front.”

Said Sen. Jon Tester (D-MT): “I don’t know if you need legislation. I think what we need is to make sure we get the people and the technology down there to stop it.”

“Let me first remind everyone that I am a representative in Congress, not a monk, and certainly not a criminal.”

— Rep. Matt Gaetz (R-FL), writing in the Washington Examiner, defending himself from allegations of sex trafficking.

“Whether Gaetz’s alleged behavior rose to the criminal is yet to be seen, but if true, it would have gotten him fired long ago in any conventional gig. Congress is no normal gig, though. It is, almost by design, a hostile workplace.”

“Joe Biden launched the early months of his presidency with a one-two combination that’s gone a long way toward taming the party’s restive left wing: Listen a lot, and back many of the policies that activists have long wanted,” the Washington Post reports.

“The embrace of sweeping liberal ideas is dramatic — with about $2 trillion in coronavirus relief spending passed and another $2 trillion in infrastructure spending proposed, along with new taxes focused on wealthy individuals and companies to help pay for this and additional spending.”

“Those policies have been paired with steady attention from Biden’s top aides, including Chief of Staff Ron Klain, who are in frequent touch with groups that have long harbored suspicions about the president’s corporate ties and incremental instincts.”

“The Biden administration on Saturday put Johnson & Johnson in charge of a troubled Baltimore manufacturing plant that ruined 15 million doses of the Johnson & Johnson coronavirus vaccine and moved to stop the plant from making another vaccine by AstraZeneca,” the New York Times reports.

“The extraordinary move by the Department of Health and Human Services came just days after officials had learned that Emergent BioSolutions, a contract manufacturer that has been making both the Johnson & Johnson and the AstraZeneca vaccines, mixed up ingredients from the two, which led regulators to delay authorization of the plant’s production lines.”

Washington Post: “This week, hope gave way, yet again, to concern. The number of coronavirus infections is rising again — in Rhode Island and across the nation. It is clouding the success of the U.S. vaccination program and the welcome announcement Friday that fully vaccinated people can travel with little risk to themselves.”

“The virus that has kept an entire planet toggling between hope and dread for the past 14 months is having one last go at the United States. The spread of highly contagious new variants of the virus, coupled with prematurely relaxed safety precautions in some places, has set off new alarms, all the way up to President Biden.”

New York Times: “On the positive side, nearly a third of the people in the United States have received at least one dose of a coronavirus vaccine. As of early Saturday morning, nearly three million people on average were receiving a shot every day, up from about two million in early March.”

“Janet Yellen will use her first major address as Treasury secretary to argue for a global minimum corporate tax rate, as she makes the case for President Biden’s plan to raise U.S. corporate taxes to fund his $2 trillion+ infrastructure plan,” Axios reports.

“Convincing other countries to impose a global minimum tax would reduce the likelihood of companies relocating offshore, as Biden seeks to increase the corporate rate from 21% to 28%.”

“Everyone in England will be urged to take a coronavirus test twice a week as a new system of Covid passports is assessed for wide-scale use, under Prime Minister Boris Johnson’s plan to reopen the economy after lockdown,” Bloomberg reports.

“Free test kits will be made available through local pharmacies, community centers and home delivery services, when the new regime goes live on April 9.”

“With most of the adult population now having received a vaccine, the government believes rapid testing of the whole population and a system of Covid status certification will help keep control over the pandemic as restrictions are eased.”

France is cutting its GDP growth forecast to 5% from 6% as the country enters a four-week national lockdown aimed at slowing a recent surge in COVID-19 cases, Bloomberg reports.

The 2020 Trump campaign accounted for up to 3% of all credit card fraud claims in the entire country, the New York Times reports.