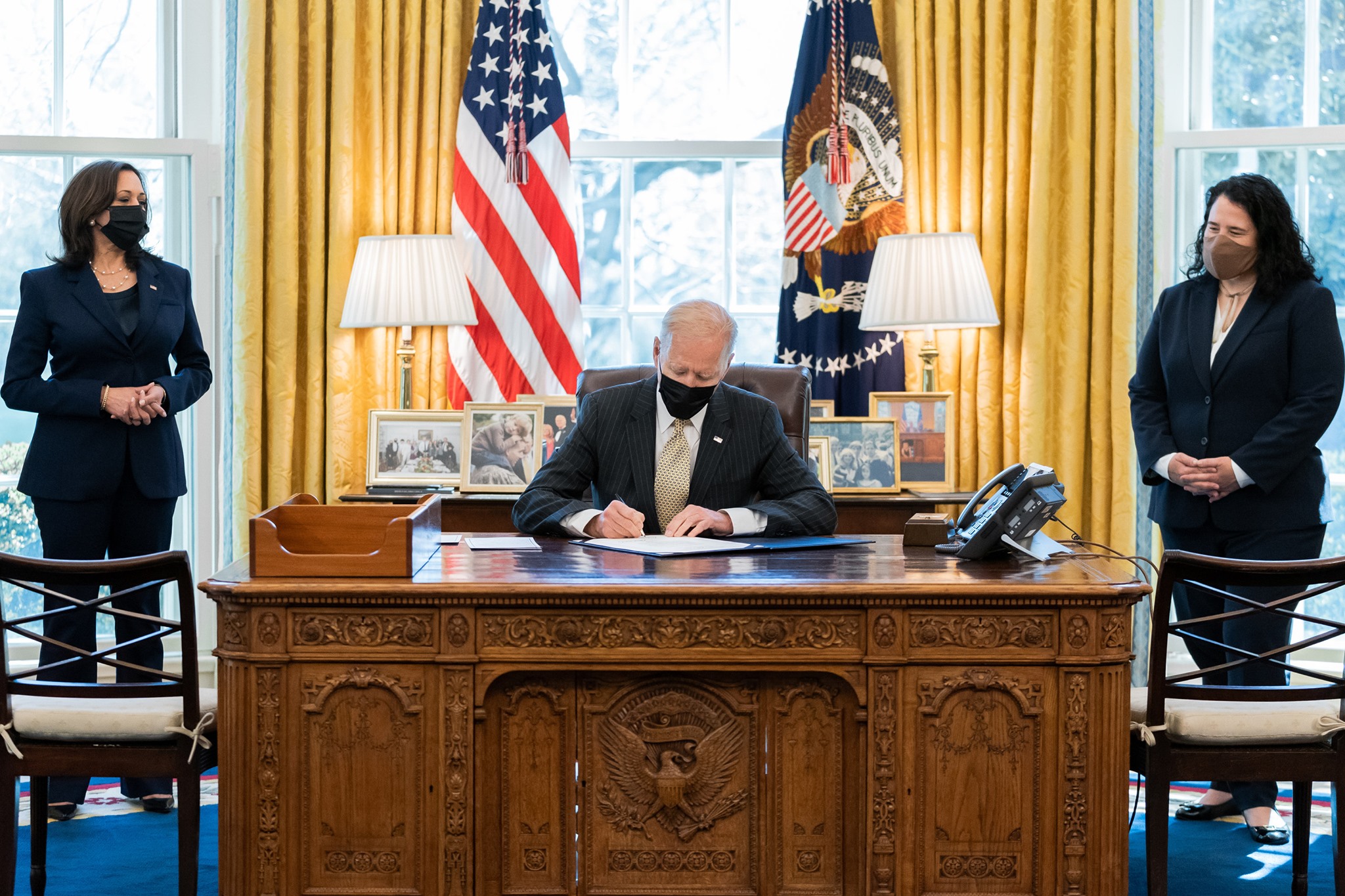 “President Joe Biden’s first big legislative package sped through Congress. The next one could take at least half a year to pass — if it can get to his desk,” Politico reports.

“Biden and Hill Democrats on Wednesday began a months-long sprint to pass a $2.5 trillion bill to shore up the nation’s physical infrastructure, paid for by hiking taxes on corporations. Republicans are already balking, dismissing Biden’s attempted outreach as disingenuous, and preparing a messaging campaign against the package that will almost certainly force Democrats to go it alone as they juggle competing wish lists from their members across the ideological spectrum.”

Jonathan Bernstein: “The chances of passing this package over Republican opposition are enhanced by one striking factor: It appears that Democrats have agreed that one of the big lessons of 2009-2010 is that helping a Democratic president look like a success is more important to the re-election efforts of senators and representatives than siding with districts on individual bills or trying to differentiate themselves from the national party.”

“In an age of partisan polarization, the president’s approval rating matters more in midterm congressional elections than anything any individual member can do to please district voters. As long as Democrats believe that, they’re going to try to stick together to pass things.”

Washington Post: The infrastructure bill is Biden politics at its purest.

“The Pentagon on Wednesday will sweep away Trump-era policies that largely banned transgender people from serving in the military, issuing new rules that offer them wider access to medical care and assistance with gender transition,” the AP reports.

“The changes come after a two-month Pentagon review aimed at developing guidelines for the new policy.”

Politico: “Absent a seismic political shift, Speaker Nancy Pelosi and Senate Majority Leader Chuck Schumer will have to draft a sprawling bill that can only afford to lose three Democratic votes in the House and zero in the Senate. Because Democrats are expecting to use their budget powers to steer the bill past a Senate filibuster, Biden’s infrastructure plan would also need to survive a slew of procedural hurdles that could further split the party.”

“The infrastructure debate amounts to a political ultra-marathon for Biden and his Democratic-led Congress, a stark contrast with the mostly breezy path to approving Biden’s $1.9 trillion pandemic relief bill. Party leaders will be under immense pressure from their base to deliver, while also protecting the political future of their most endangered members, some of whom are already anxious about GOP attacks on proposed tax hikes, ahead of the midterm elections.”

Axios: How Biden is selling his infrastructure plan to Democrats.

Said Ocasio-Cortez: “If we could wave a magic wand, and progressives in the House were able to name any number and get it through — which obviously isn’t the case, but if we’re looking at ideals … we’re talking about, realistically, $10 trillion over 10 years.”

New York Times: “It has been 40 years since President Ronald Reagan declared in his first inaugural address that ‘government is not the solution to our problems, government is the problem.’ The infrastructure plan that President Biden described on Wednesday … is a bet that government can do colossal things that the private sector cannot.”

“It will take years to know whether Mr. Biden’s initiative will have the lasting power of the New Deal or the Great Society, or whether it can ‘change the paradigm,’ as he argued a few weeks ago. Yet it is already clear it is based on the gamble that the country is ready to dispense with one of the main tenets of the Reagan revolution, and show that for some tasks the government can jump-start the economy more efficiently than market forces.”

Delta Air Lines CEO Ed Bastian, who is one of the largest employers in Georgia, condemned the state’s new election law as “unacceptable” in a memo circulated to staff, claiming that the “entire rationale for this bill was based on a lie” about widespread voter fraud in 2020, Axios reports.

“State prosecutors in Manhattan investigating former President Donald Trump and the Trump Organization have subpoenaed the personal bank records of the company’s chief financial officer and are questioning gifts he and his family received from Mr. Trump,” the New York Times reports.

“In recent weeks, the prosecutors have trained their focus on the executive, Allen Weisselberg, in what appears to be a determined effort to gain his cooperation.”

“Separately, the prosecutors are also seeking a new round of internal documents from the Trump Organization, including general ledgers from several of its more than two dozen properties that the company did not turn over last year.”

A federal judge ruled that a non-disclosure agreement signed by a 2016 Trump campaign staffer cannot be enforced because it’s too vague, Axios reports.

“The Apprentice contestant, Summer Zervos, claimed in the weeks before the 2016 election that Mr. Trump groped and kissed her without her consent in 2007. In 2017, she sued Mr. Trump for defamation after he denied her allegations and called her story a ‘hoax.’”

“The federal investigation into Rep. Matt Gaetz (R-FL) is focused on allegations that the junior congressman had a sexual relationship with at least one minor, and is scrutinizing the Republican’s conduct not only in Florida but in other states too,” ABC News reports.

The Justice Department investigation of Rep. Matt Gaetz (R-FL) and allegations of sex trafficking also includes whether campaign funds were used to pay for travel and expenses, CNN reports.

Philip Bump looks at rumors that Rep. Matt Gaetz (R-FL) was considering resigning from Congress to take a job in conservative media.

“Outside of the context that emerged with the reported investigation, the story made some sense. Gaetz has been on Fox News an average of 87 minutes a month over the past 12 months; for a low-ranking member of the minority party with an affection for the spotlight to make such a transition wouldn’t be a shock.”

“With the new revelation, though, that story takes on a different color: Was that rumor floated simply as cover for Gaetz to resign for other reasons? (It’s worth noting that resignations from positions of power can be part of plea agreements.) Once we’re reconsidering Gaetz’s willingness to walk away from Congress, we might reconsider his offer in early February to resign from Congress to aid Trump’s impeachment defense. Was the impetus for that attention or, even then, some form of self-preservation?”

Former Trump aides aren’t necessarily happy to see Rep. Matt Gaetz (R-FL) in trouble, but they “feel a little vindicated,” Insider reports.  Said one: “He’s the meanest person in politics.”   Said another: “Republican leadership will likely watch him completely implode in a matter of days without having to do a thing.”

Fox News has confirmed it has no plans to hire Rep. Matt Gaetz (R-FL) for a job at the network, The Hill reports.

“Joe Biden will convene his first Cabinet meeting on Thursday, a presidential rite of passage that will be used to promote his new infrastructure plan. The gathering will look very different from those held by his predecessor,” the AP reports.

“To begin with, the full Cabinet won’t meet in the room that bears its name, instead assembling in the more spacious East Room to allow for social distancing. All attendees, including the president, will wear masks. Also, the afternoon meeting probably will not include the over-the-top tributes to the chief executive that came to define Cabinet meetings held by President Donald Trump.”

“The court ruled that the governor overstepped his powers by issuing multiple emergency declarations for the pandemic, lasting longer than 60 days, without approval from the state legislature. The ruling invalidates the current mask mandate in the state, which was set to expire next Monday.”

“Wiles has been tasked with overseeing Trump’s fundraising operation and creating a system for issuing endorsements. Notably, she will layer over Trump’s former campaign manager Bill Stepien and deputy Justin Clark, as well as the committee of people who currently help decide endorsements. While Trump has expressed frustration with Stepien and Clark — as he has with many of his previous chiefs of staff and campaign managers — he is not firing them.”

Said one adviser of the previous arrangement: “They were just flying by the seat of their pants.”

“On average, roughly 63,000 Americans per day were diagnosed with coronavirus infections over the past week. That’s a 17% increase from the week before, and echoes the rising caseloads of the pandemic’s second wave last summer,” Axios reports.

The good news: “Because so many seniors have been vaccinated — 73% have gotten at least one dose — this fourth wave is likely to be a lot less deadly than the previous ones. Many states have also prioritized vaccinating people with underlying health conditions, which will also help constrain the increase in severe illness and death.”