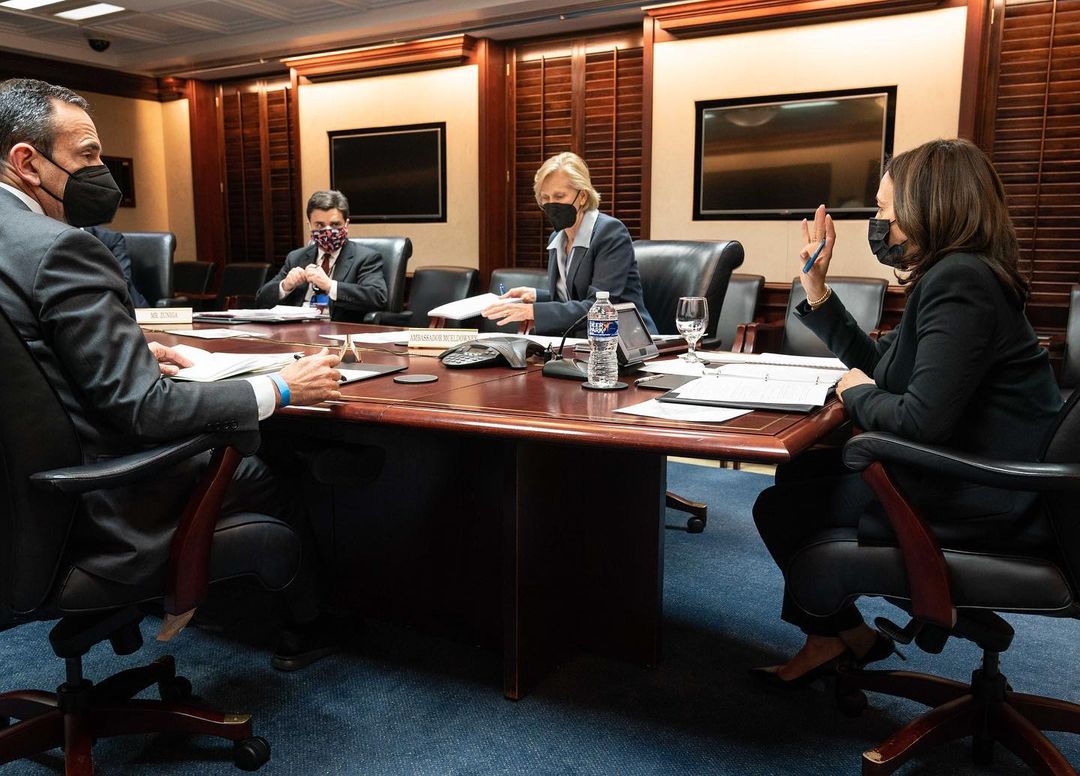 Biden unveiled his $2.25 trillion jobs, infrastructure, and green energy proposal to reshape the U.S. economy. Over the next eight years, the plan would rebuild 20,000 miles of roads, repair 10 of the most economically important bridges in the country, eliminate lead pipes from the nation’s water supply, update and modernize the electric grid, fund the construction of about a half-million electric vehicle charging stations, expand high-speed broadband across the entire country, upgrade and build new schools, and more.

The White Houses said the spending would generate millions of new jobs as the country shifts away from fossil fuels and accelerates the fight against climate change. The White House also said the proposal would pay for itself over 15 years by raising the corporate tax rate to 28%, increasing the global minimum tax paid to 21%, ending federal tax breaks for fossil fuel companies, and ramping up tax enforcement. Nancy Pelosi said she wants to have the House pass the package by July 4.

Washington Post: “The administration’s promises are vast and may prove difficult to enact, even if the effort can get through Democrats’ extremely narrow majority in Congress.”

Wall Street Journal: “President Biden envisions long-term federal spending claiming its biggest share of the American economy in decades. He wants to pay for that program in part by charging the highest-earning Americans the biggest tax rates they’ve faced in years…”

“It all marks a major turning point for economic policy. The gamble underlying the agenda is a belief that government can be a primary driver for growth. It’s an attempt to recalibrate assumptions that have shaped economic policy of both parties since the 1980s: that the public sector is inherently less efficient than the private, and bureaucrats should generally defer to markets.”

Los Angeles Times: “Biden’s shift, from backing a key part of Reagan’s agenda to embracing an expansion of government more in tune with President Franklin D. Roosevelt’s New Deal, parallels a change in the electorate. Voters’ concerns about the scope of government and the size of the national debt haven’t disappeared. But for now, that’s not driving how people vote.”

“As a result, though President Trump handed Biden a federal debt that had reached the largest level since the end of World War II, the new president is operating with fewer political constraints related to the federal deficit than any of his three Democratic predecessors.”

“A lot of the mistrust in our country right now is the result of policy failure. And that policy failure is largely about a generation of intentional disinvestment in the things that we share and need together.”  — Transportation Secretary Pete Buttigieg in an interview with the Washington Post.

Washington Post: “Biden phoned Senate Minority Leader Mitch McConnell (R-KY) on Tuesday… But McConnell, who revealed the call during an event in Kentucky on Wednesday, signaled he’s still not a fan of the proposal.”

The Week: “The SALT deduction is a good window into the politics of Democratic moderates in blue states. The SALT cap stipulates that tax filers can now only deduct $10,000 in state and local tax payments from their income for the purposes of federal tax liability.”

“The deduction is effectively a roundabout subsidy of high-tax blue states (because it lessens the burden of paying their often higher taxes), and capping it was a gleeful Republican finger into the eye of places like Maryland, New York, and California. But the benefits of removing the cap would be extraordinarily regressive.”

Vice News: “On Tuesday, it sure seemed like the Storm had arrived, when the New York Times broke a bombshell story that Florida Rep. Matt Gaetz was being investigated by the Department of Justice for allegedly having a sexual relationship with a 17-year-old girl and paid for her to travel with him.”

“But in the hours after the news broke, QAnon followers didn’t celebrate. Instead, they frantically scrambled to explain why he couldn’t possibly have done what he’s accused of doing.”

“Suspected Russian hackers gained access to email accounts belonging to the Trump administration’s head of the Department of Homeland Security and members of the department’s cybersecurity staff whose jobs included hunting threats from foreign countries,” the AP reports.

“The intelligence value of the hacking of then-acting Secretary Chad Wolf and his staff is not publicly known, but the symbolism is stark.”

“More than two months into his term, President Joe Biden has yet to name a single ambassador to send overseas, putting him behind the pace set by his most recent predecessors and leading to early frustrations among some career State Department officials and big-time Democratic donors,” CNN reports.

“Two Capitol Police officers injured in hand-to-hand combat during the Jan. 6 insurrection are suing former President Donald Trump for inciting his supporters, many of whom later stormed Congress and formed a mob that assaulted more than 100 officers protecting lawmakers,” Politico reports.

The Covid-19 vaccine from Pfizer and BioNTech safely protects kids 12 years and older, results likely to lead to inoculating the children before the next school year, the Wall Street Journal reports.

The vaccine was 100% effective in protecting against symptomatic disease in a study of more than 2,200 children.

Yahoo News: “New research published earlier this month in the American Journal of Public Health argues that Florida is undercounting the number of people who died from COVID-19 by thousands of cases, casting new doubt on claims that Gov. Ron DeSantis navigated the coronavirus pandemic successfully.”

“They came to that conclusion by comparing the number of estimated deaths for a six-month period in 2020, from March to September, to the actual number of deaths that occurred, a figure known as ‘excess deaths’ because they exceed the estimate.”

Washington Post: “The issue has received an increasing amount of attention from some of the party’s most extreme members and conservative media figures, but it has also been seized on by Republican leaders like Florida Gov. Ron DeSantis, who is considered a potential 2024 presidential candidate.”

Said DeSantis: “We are not supporting doing any vaccine passports in the state of Florida. It’s completely unacceptable for either the government or the private sector to impose upon you the requirement that you show proof of vaccine to just simply be able to participate in normal society.”

“The hyper-charged rhetoric is directed at a nascent initiative between the Biden administration and private companies to develop a standard way for Americans to show they have received a coronavirus vaccination. The idea behind the passports or certificates is that they would be a way to ensure that people could return to normal activities without risking further spread of a virus that has killed more than 550,000 Americans.”

New York Times: “While few Democrats are willing to publicly say so, the details of the more than 800-page bill — which would radically reshape the way elections are run and make far-reaching changes to campaign finance laws and redistricting — have become a point of simmering contention. Some proponents argue that Democrats should break off a narrower bill dealing strictly with protecting voting rights to prevent the legislation, known as the For the People Act, from collapsing amid divisions over other issues.”

“A broad coalition of Democrats and liberal advocacy groups insist that the measure should not be broken apart, arguing that now is the time for an ambitious overhaul. But with Senator Joe Manchin, a conservative West Virginia Democrat, opposed to the measure in its current form, Democratic leaders and Mr. Biden face tough decisions in the coming weeks about whether they can wrangle all their members behind it more or less as is, or must consider striking a narrower compromise.”

Peter Navarro privately urged former President Donald Trump “to acquire critical medical supplies in the early days of the coronavirus outbreak — and after the warning was ignored, pursued his own ad hoc strategy that committed more than $1 billion in federal funds and has since prompted multiple probes,” the Washington Post reports.

David Catanese: “Mitch McConnell can see the future — and knows it’s likely to place Republicans in a pickle.”

“He sees a rapidly recovering economy, an increasingly vaccinated population and general optimism budding across the country like bluegrass at the start of springtime. And he’s realized the GOP needs an explanation for the shower of good news coming in the opening months of a new Democratic administration.”

Wall Street Journal: “Democrats are still negotiating over which healthcare policy elements could be in the second of two spending programs the administration plans to unveil soon.”

“The package is likely to contain measures to reduce drug prices and expand health coverage, lawmakers said. Proposals to expand Medicare eligibility from age 65 to 60 and to enable the federal government to negotiate drug prices in the health program for seniors—both of which President Biden supported on the campaign trail—are also likely to be included.”

“The Bidens’ dog Major has been involved in another biting incident that required medical attention,” CNN reports.

“The incident, which involved a National Park Service employee, took place on the White House South Lawn on Monday afternoon. The employee was working at the time and needed to stop in order to receive treatment from the White House medical unit.”

Washington Post: “Despite the headline numbers, the economy is still in bad shape for millions of Americans. And for many workers … jobs may not come back even if the economy booms again… The bleak picture shows the darker side of the Fed’s plan to keep interest rates near zero for quite awhile.”

“Historically, the Fed raised rates and slowed the economy to keep inflation from creeping too high, even at the cost of higher unemployment. Now the Fed goes by a new playbook, one that tolerates higher inflation if that means more people can get a job. But if all of that growth leaves behind people … the Fed’s path to getting as many people back to work as possible will be even harder to forge.”

Atlanta Journal-Constitution: “A Georgia State Patrol lieutenant said memories of the Jan. 6 insurrection at the U.S. Capitol were on his mind when he arrested a Democratic legislator after she knocked repeatedly on the door of Gov. Brian Kemp’s state office as he was touting a sweeping new elections law.”

Uh huh. It was just one women politely knocking on a door.

“The Biden administration for the first time Tuesday allowed journalists inside its main border detention facility for migrant children, revealing a severely overcrowded tent structure where more than 4,000 migrants, including children and families, were crammed into pods and the youngest kept in a large play pen with mats on the floor for sleeping,” the AP reports.

“The moratorium, which affected H-1B visas used by technology companies to hire foreign coders and engineers, was imposed last June.”

“Rep. Madison Cawthorn (R-NC) sent out a tweet Tuesday touting some funds that community health centers in his district will be receiving ― even though he voted against the legislation that made the money possible,” the HuffPost reports.