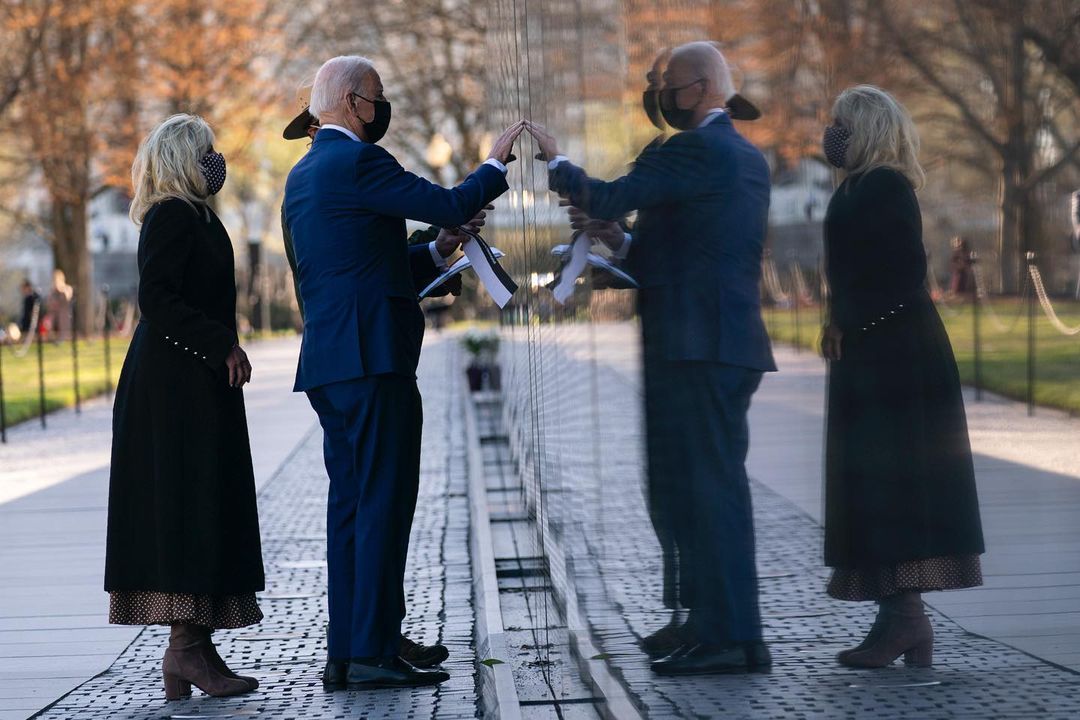 “President Joe Biden is aiming for summer passage of his sweeping $4 trillion infrastructure plan, and the White House hopes to take a more deliberate and collaborative approach with the contentious Congress than it did on the COVID-19 rescue package,” the AP reports.

“Though the White House is emphasizing the urgency, it also insists this will not be considered an emergency response like the $1.9 trillion virus relief bill that Biden signed into law over Republican objections earlier this month. The administration wants to see progress on the new legislation by Memorial Day and have it passed over the summer.”

“President Biden is preparing to go to the mat for four tax increases worth about $1.8 trillion to help pay for his infrastructure and social safety net plans,” advisers tell Axios.

“Biden will outline an array of tax proposals beginning on Wednesday — an opening bid ahead of months-long negotiations mostly within the Democratic Party — but these are his priorities.”

Transportation Secretary Pete Buttigieg said that neither a gas tax nor a mileage tax would be part of President Joe Biden’s sweeping infrastructure plan to be unveiled on Wednesday, CNN reports. Buttigieg had previously indicated such a tax “could be part of the mix.”

Politico: “Buttigieg may be the youngest of President Joe Biden’s Cabinet secretaries and the one with the most on-the-job learning to do. But he also comes with the most prominent reputation — a small-town mayor with big ideas and even bigger ambitions; the type of person who plunges so deep into new subjects that he might spend a casual evening sifting through a digital library on transportation and actually enjoy it.”

“With the White House’s massive infrastructure bill set for its formal unveiling, he and his boss are looking to turn that reputation into a political asset. They want to make him one of the package’s chief pitchmen.”

Bloomberg: “Labor unions and environmental groups are joining forces to lobby the White House and Democratic congressional leaders to back $4 trillion worth of spending in the coming long-term economic plan — in a sign that sometimes testy relations between the two constituencies are thawing.”

Bloomberg: “A New York Democrat said he won’t back any tax increases that President Joe Biden proposes to pay for infrastructure legislation unless there is also a repeal of the $10,000 cap on state and local tax deductions.”

Said Rep. Tom Suozzi (D-NY) in a statement Monday: “No SALT, no deal. I am not going to support any change in the tax code unless there is a restoration of the SALT deduction.”

CNBC: “Leaders of the finance industry and other businesses in New York are pushing President Joe Biden and Senate Majority Leader Chuck Schumer, who represents the state, to bring back the full state and local tax deduction.”

“Schumer signaled as recently as Friday that he plans to bring up the return of the full deduction when negotiations begin over reforming the tax code as a means to pay for Biden’s next initiatives, including rebuilding the nation’s infrastructure.”

“President Biden plans to announce his first slate of judicial nominees on Tuesday, elevating U.S. District Judge Ketanji Brown Jackson to the influential appeals court in Washington to succeed Merrick Garland as part of the largest and earliest batch of court picks by a new administration in decades,” the Washington Post reports.

“Jackson, often mentioned as someone who could become the first Black woman on the Supreme Court, is among Biden’s 11 nominations that include three Black women for appeals court vacancies and the first Muslim American to serve on a District Court. The group is designed to send a message about the administration’s desire for more diversity on the federal bench and how rapidly the president wants to put his mark on it.”

Wall Street Journal: “Mr. Biden’s options have been bolstered by about 18 judges—10 appointed by Democrats, eight by Republicans—who have cleared the way for Mr. Biden to appoint a successor by taking senior status since he was sworn in as president on Jan. 20. That compares with 10 during the first two months of President Trump’s term.”

“With billions of dollars in lawsuits now in the balance, Dominion Voting Systems has quietly expanded its legal armada in recent days, as the election technology company goes after Trumpworld and conservative media giants,” the Daily Beast reports.

“People familiar with the matter say that the company’s legal team still hadn’t ruled out going after ex-President Trump specifically, but that no final decision had been made yet on if they wanted to open up that can of worms on the former leader of the free world.”

Bloomberg: “The race to shield coal country from an energy transition that Biden contends will generate jobs and wealth in everything from solar-panel manufacturing to wind power generation highlights the political complexity of the shift to renewables.”

“Even some Democrats in coal-producing states support the efforts to protect people’s livelihoods and the funding of schools and other public services in areas that derive income from the dirtiest fossil fuel.”

Sen. Mitt Romney told the Salt Lake Tribune that he will not support attempts to tighten federal gun laws in the wake of recent back-to-back mass shootings, although he’s open to working with his colleagues on improving background check technology.

Matt Yglesias: “The urgency [for gun control legislation] is understandable. But from a political standpoint, Democrats would be better off focusing on parts of their agenda that have more realistic prospects of success. It’s not just that the odds are low for passing even modest gun-control legislation. It’s that the kinds of measures that are politically feasible would have little effect without policing reform, while those that would save large numbers of lives are politically toxic.”

Senate Minority Leader Mitch McConnell (R-KY) encouraged “all Republican men” to get the Covid-19 vaccine, as new polls indicate many in the group are skeptical of getting the shot, CNN reports. Said McConnell: “I can say as a Republican man, as soon as it was my turn, I took the vaccine. I would encourage all Republican men to do that.” He added that there is “no good argument not to get the vaccination.”

Michael Gerson: “It is the sign of a sickness deeper than covid-19 that the defiance of public health guidance has become a political selling point in the Republican Party.”

“In the not-so-distant past, Republican governors competed with their colleagues to author innovative welfare reform or criminal justice proposals. Now bad covid policy is a point of pride and a path to influence.”

Rep. Matt Gaetz (R-FL) “is being investigated by the Justice Department over whether he had a sexual relationship with a 17-year-old and paid for her to travel with him,” the New York Times reports.

“Investigators are examining whether Mr. Gaetz violated federal sex trafficking laws… A variety of federal statutes make it illegal to induce someone under 18 to travel over state lines to engage in sex in exchange for money or something of value. The Justice Department regularly prosecutes such cases, and offenders often receive severe sentences.”

“The investigation was opened in the final months of the Trump administration under Attorney General William P. Barr.”

Rep. Matt Gaetz (R-FL) confirmed to Axios he “is under federal investigation for sexual activity with women, and fears being criminally charged.”

Said Gaetz: “I have definitely, in my single days, provided for women I’ve dated. You know, I’ve paid for flights, for hotel rooms. I’ve been, you know, generous as a partner. I think someone is trying to make that look criminal when it is not.”

Matthew Miller: “Given that he’s admitting to the relevant behavior here, if the person in question was in fact underage, then this is pretty open and shut. Pretty simple thing to determine.”

Gaetz later claimed on Twitter that his is a victim of “an organized criminal extortion.”

Prosecutors say that when officers arrested a Capitol riot suspect at his Dallas home, he was wearing a T-shirt with “I Was There, Washington D.C., January 6, 2021” emblazoned on it, the AP reports.

Newsweek: “The social network Parler was flooded with a wave of angry comments on Friday after it emerged that the ‘free speech’ platform had repeatedly collaborated with the FBI in the weeks leading up to the January 6 Capitol riot.”

The Daily Beast has learned “there are now two grand juries underway in Fulton County, and jurors in these secret proceedings will soon be asked to issue subpoenas demanding documents and recordings related to the Trump investigation.”

Bloomberg: “Georgia’s elections chief was sued by a group of nonprofit civic organizations that claim a new voting law signed Thursday by the state’s Republican governor will make it harder for minorities to cast ballots.”

“The lawsuit, against Georgia Secretary of State Brad Raffensperger, is one of the first challenges to a wave of voting restrictions taking shape in state legislatures across the country. It was filed late Thursday, right after the law passed, by groups including the New Georgia Project and the Black Voters Matter Fund.”

Robert McCartney: “Opponents of D.C. statehood have at most three arguments that deserve any respect. They involve the Founders’ intent, retrocession to Maryland and the 23rd Amendment.”

“But none stands up to scrutiny,.. It’s hard to accept that Republicans and other critics believe that these arcane constitutional claims count for more than respecting the nation’s founding rallying cry of ‘no taxation without representation.’”

“Instead, as GOP leaders are increasingly willing to admit publicly, they care primarily about preventing the deep-blue District from sending two additional Democrats to the Senate and one to the House.”

New York Times: “South Dakota is just one of a growing number of states where Republicans are diving into a culture war clash that seems to have come out of nowhere. It has been brought about by a coordinated and poll-tested campaign by social conservative organizations like the American Principles Project and Concerned Women for America. The groups are determined to move forward with what may be one of their last footholds in the fight against expanding LGBTQ rights.”

“Three other states have passed bills this month that resemble South Dakota’s. In Mississippi and Arkansas, they are set to become law this summer. And similar bills have been introduced by Republicans in two dozen other states, including North Carolina, where an unpopular ‘bathroom bill’ enacted in 2016 prompted costly boycotts and led conservatives nationwide to pull back on efforts to restrict rights for transgender people.”

Masha Green: The movement to exclude trans girls from sports.

Bloomberg: “The World Health Organization’s chief said a mission to study the origins of the coronavirus in China didn’t adequately analyze the possibility of a lab leak before it concluded that the pathogen probably spread from bats to humans via another animal.”

“Director-General Tedros Adhanom Ghebreyesus said even though the international team of scientists determined that a leak is the least likely hypothesis for the origin of the pandemic, it requires further investigation. He said he’s ready to deploy additional missions involving specialist experts as he doesn’t believe the assessment was extensive enough.”