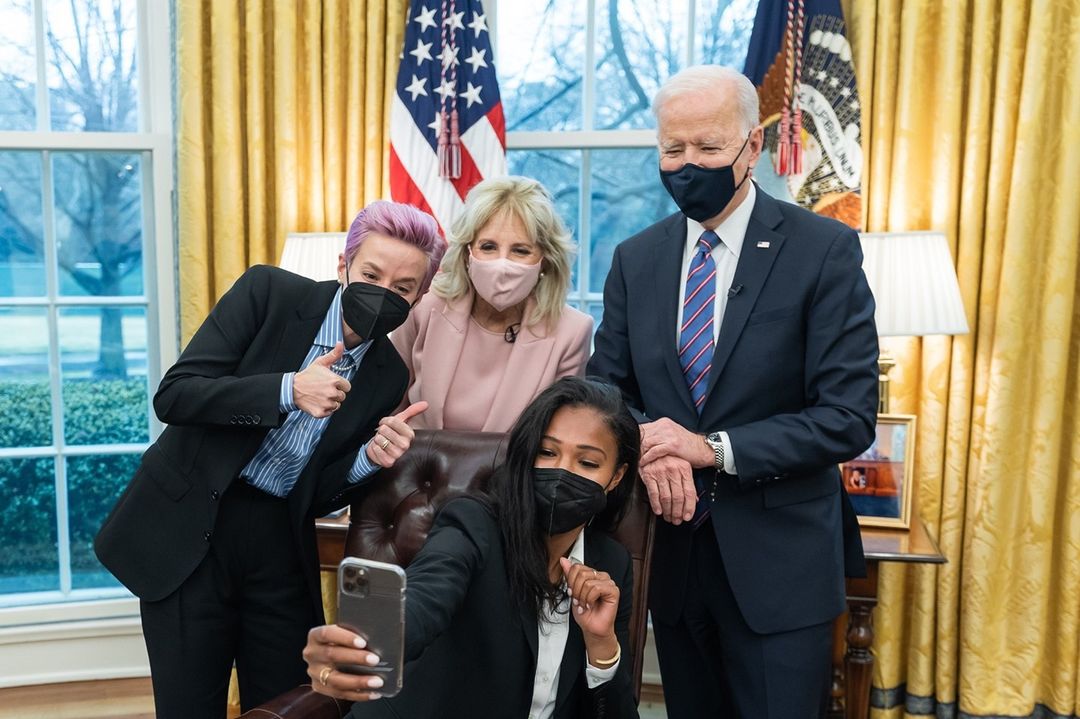 “President Biden revealed in vivid display this week the thinking animating his 100-day plan: Do not allow outside events to take his eye off the make-or-break imperatives of virus eradication and economic growth,” Axios reports.

Said Biden: “Successful presidents — better than me — have been successful, in large part, because they know how to time what they’re doing — order it, decide and prioritize what needs to be done.”

Playbook: “Over and over in the East Room, the president made it clear Thursday that he’s in control of the timing of his legislative priorities and that he would not allow events to overtake his plans. Guns, immigration, voting rights, filibuster reform — the big issues that have intervened recently and that dominated questioning by reporters — would have to wait.”

Politico: “Biden’s fitness for office, a longtime fixation among conservatives, is dominating conversations on the right as Trump openly sows doubts about the health of the man who defeated him. One Republican senator recently texted an acquaintance his private suspicions that Biden, the oldest president in history, is mentally unwell.”

“In on-the-record interviews, however, seven GOP senators who’ve met with Biden lately described him as cogent and well-versed on the issues they discussed. And none echoed the warnings many pro-Trump Republicans have issued about Biden amid the chatter about his stair-stepping acumen.”

Said Sen. Shelley Moore Capito (R-WV): “In the two meetings I was in with the president, he was as sharp as a tack.”

Charlie Cook: “Anyone who referred to Biden a year ago as a ‘centrist’ probably got carried away. One could have plausibly argued that he has long been in the ideological center of the Democratic Party, but he’s pretty far from the 50-yard line of the electorate as a whole. Still, his ideological posture of late has been surprising.”

“It shouldn’t surprise us any longer. It is becoming increasingly apparent that the parliamentary maneuvering over the stimulus wasn’t merely a tactical decision to skip the bipartisan approach; it was more strategic, more foundational…”

“Some wags used to joke that Biden was the type of politician who could put out the fire in a fireside chat. But truly, Biden’s agenda is more reminiscent of Franklin Roosevelt’s New Deal or Lyndon Johnson’s Great Society than the more modest and forgettable Fair Deal of Harry Truman, Bill Clinton’s New Covenant, or Jimmy Carter’s New Spirit. As our nation’s 47th vice president once said about another expansion of federal authority, ‘this is a big f*cking deal.’”

Politico: “In letters to 16 agencies across the Executive Branch and Congress, the panels asked for all communications sent between agency officials regarding Congress’ Jan. 6 session, when lawmakers certified Joe Biden’s Electoral College victory. The requests demand all relevant documents and messages from Dec. 1, 2020, to Jan. 20, 2021.”

“The unusually broad committee review comes as Speaker Nancy Pelosi has been unable to secure bipartisan cooperation to launch an independent commission to review the federal government’s handling of the attack, which left five people dead, including a Capitol Police officer.”

“The House chamber is being transformed into a massive safe room for members with the addition of bulletproof doors,” Axios reports.

Susan Glasser: “Sometimes the big moments in our politics meet the very low expectations we have for them. Joe Biden’s first Presidential press conference, on Thursday, was one of them. By the end of it, after an hour and two minutes that felt much longer, Biden had answered some two dozen questions. The majority of them were repetitive variants on one of two subjects: immigration and the Senate filibuster.”

“Biden had no actual news to offer on either subject. In case you missed it, he is really, totally, absolutely committed to fixing the terrible situation at the border, and also not yet ready—because he does not have the votes—to commit to blowing up the filibuster. There was not a single question, meanwhile, about the ongoing pandemic that for the past year has convulsed life as we know it and continues to claim an average of a thousand lives a day. How is this even possible during a once-in-a-century public-health crisis, the combating of which was the central theme of Biden’s campaign and remains the central promise of his Presidency? It’s hard not to see it as anything other than an epic and utterly avoidable press fail.”

After not one reporter asked President Joe Biden about the pandemic that has killed more than 500,000 Americans in his first news conference as president, Zeynap Tufecki lists the 10 questions she would have asked.

“Dominion Voting Systems on Friday filed a $1.6 billion defamation lawsuit against Fox News, arguing the cable news giant falsely claimed in an effort to boost faltering ratings that the voting company had rigged the 2020 election,” the AP reports.

“Former President Trump defended some of his supporters who rioted at the U.S. Capitol, saying Thursday that they posed ‘zero threat’ to the lawmakers who had assembled to confirm President Biden’s victory in the November election,” the Los Angeles Times reports.

Trump also complained that law enforcement was now “persecuting” the Capitol rioters, hundreds of whom have been arrested, while “nothing happens” to left-wing protesters.

Said Trump: “Some of them went in and they’re — they’re hugging and kissing the police and the guards. You know, they had great relationships. A lot of the people were waved in, and then they walked in and they walked out.”

Dahlia Lithwick: “The White House, working alongside Senate Democrats, decided to cast a wide net for candidates with diverse backgrounds and a broader pool of legal experience than we have seen in prior judicial searches.”

“In a sense then, yes, it is way past time for judicial action. But progressive groups are seeking to break the model of judicial selections to do something radical with Biden’s judiciary, and that will take some time.”

“The image of Cannon, an Atlanta Democrat, being forcibly dragged from the statehouse lobby was hard to watch and the arrest could be legally questionable, since state law protects sitting lawmakers from arrest during a session except for charges of treason, felonies or breach of the peace.”

Washington Post : “The Evanston City Council approved the first phase of reparations to acknowledge the harm caused by discriminatory housing policies, practices and inaction going back more than a century. The 8-1 vote will make $400,000 available in $25,000 homeownership and improvement grants, as well as in mortgage assistance for Black residents who can show they are direct descendants of individuals who lived in the city between 1919 and 1969.”

“Utah is a step closer to requiring all cellphones and tablets sold in the conservative state to automatically block pornography after the Republican governor signed legislation Tuesday that critics call a significant intrusion of free speech,” the Associated Press reports.

“The measure won’t go into effect unless five other states enact similar laws, a provision that was added to address concerns that it would be difficult to implement.”

Arkansas Gov. Asa Hutchinson (R) “signed a law banning transgender women and girls from competing in school sports teams consistent with their gender identity, making the state the second to approve such a restriction so far this year,” the AP reports.  “The Republican governor approved the measure despite objections from medical and child-welfare groups that it would have devastating impacts on transgender youth.”

Jonathan Bernstein: “What Republicans want is to spend at levels they think appropriate (more on defense and some domestic programs, less on others) and to tax at levels they think appropriate (generally less, especially for the wealthy). They are consistent in those preferences. They don’t care — at all — about how the revenues the government receives from those taxes compares to overall government spending. Republican preferences don’t add up, which is why deficits leap up every time they get to control policy.”

New York Times: “Labor advocates confess to a gnawing anxiety: Despite Mr. Biden’s remarkable support for their movement, unions may not be much better off when he leaves office than when he entered it.”

“That’s because labor law gives employers considerable power to fend off union organizing, which is one reason that union membership has sunk to record lows in recent decades. And Senate Republicans will seek to thwart any legislative attempts — such as the PRO Act, which the House passed this month — to reverse the trend.”

New research shows U.S. COVID-19 fatalities “could have stayed under 300,000, versus a death toll of 540,000 and rising, if by last May the country had adopted widespread mask, social distancing, and testing protocols while awaiting a vaccine,” Reuters reports.

Since Texas Attorney General Ken Paxton (R) took office in 2015, “the vast majority of individuals his office has prosecuted for voter fraud are people of color — and primarily women of color, a new analysis by the American Civil Liberties Union shows,” the Houston Chronicle reports.

Family members of QAnon believers have told Vice News “that their loved ones are now telling them that QAnon doesn’t exist as a way to rebuff any arguments made against QAnon.”

“QAnon followers are also using the ‘there is no QAnon’ line as a way of excusing high-profile figures who appear to have disavowed QAnon.”

“For example, when Marjorie Taylor Greene kind-of-sort-of-not-really said she didn’t believe in QAnon, followers quickly claimed that she was speaking to them in code and only making the denial to appease her Republican colleagues.”

Associated Press: “The suspect in the shooting at a Boulder, Colorado, supermarket was convicted of assaulting a high school classmate but still got a gun. The man accused of opening fire on three massage businesses in the Atlanta area bought his gun just hours before the attack — no waiting required.”

“They are just the latest suspected U.S. mass shooters to obtain guns because of limited firearms laws, background check lapses or law enforcement’s failure to heed warnings of concerning behavior.”