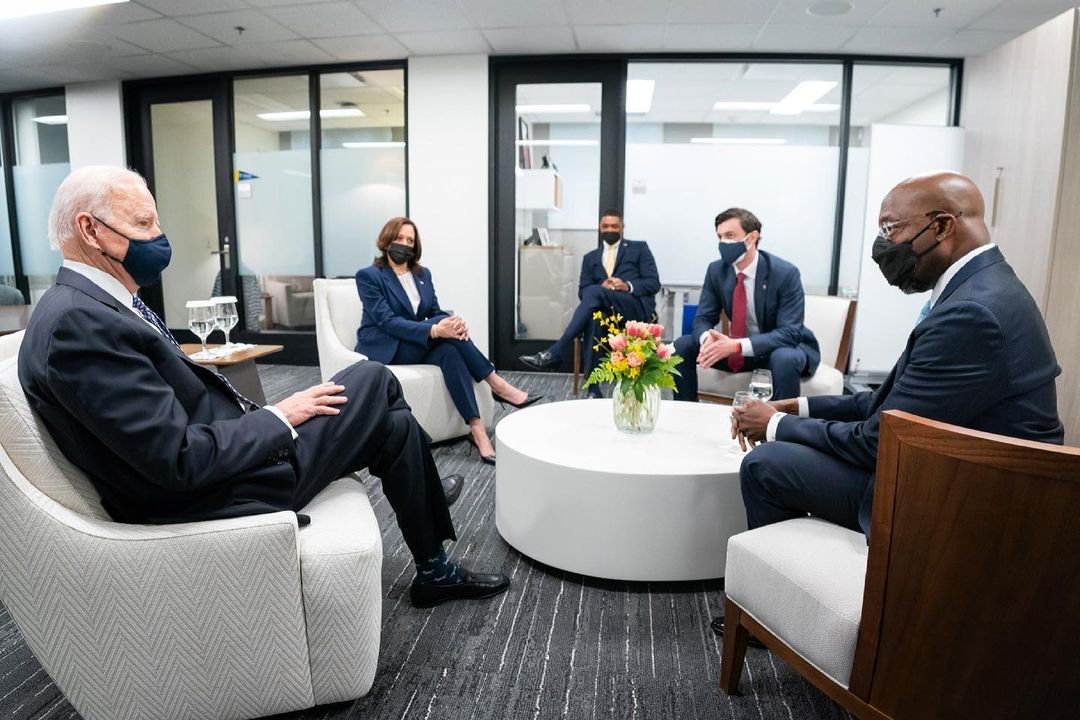 Axios: “The post-Trump Republican Party cares most about issues in seven key categories, with most prioritizing economic issues like job creation and limited government, according to a new survey conducted by former President Trump’s chief 2016 and 2020 pollster.”

The top three include:

Geoffrey Skelley: “In a February poll taken on behalf of Democracy for All 2021 Action, which backs efforts to admit D.C. as a state, Data for Progress found that 54 percent of likely voters backed statehood while just 35 percent opposed it. However, DFP told respondents that statehood would give congressional voting representation to more than 714,000 Washingtonians, ‘just like Americans in every other state,’ so this question framing likely primed respondents to be more favorable toward statehood.”

“Bottom line: How you ask a poll question matters.”

A Democratic Georgia state lawmaker was arrested by state troopers and charged after she knocked on Gov. Brian Kemp’s (R) door multiple times as he signed a controversial voting bill into law.

“Georgia is roughly where Virginia was a decade ago: Republicans still control state government and may be able to redistrict the state to their liking one last time…but long-term/demographically, the writing is kinda on the wall.” — Cook Political Report’s Dave Wasserman on Twitter.

The Daily Beast identified five companies that appear to have gone back on their suspension of donations to Republican lawmakers who objected to the 2020 election results: AT&T, Cigna Health, Ford Motors, Pfizer, and Wells Fargo.

TEXAS VOTING RESTRICTIONS– NPR: “One measure that’s been proposed would make distributing ballot applications to voters who didn’t ask for one a felony. Others would outlaw drive thru-voting, and not allow polling locations to be open for more than 12 hours — specifically beyond 7 a.m. to 7 p.m. Another would require that election administrators put the same amount of voting machines in every one of their polling sites, no matter what.”

New York Times: “The entry of two hard-right candidates this week into Senate races in Missouri and Alabama exposed the perils for Republicans of a political landscape in which former President Donald J. Trump is the only true north for grass-roots voters.”

“Strong state parties, big donors and GOP national leaders were once able to anoint a candidate, in order to avoid destructive demolition derbies in state primaries.”

“But in the Trump era, the pursuit of his endorsement is all-consuming, and absent Mr. Trump’s blessing, there is no mechanism for clearing a cluttered primary field.”

“These are the National Republican Senatorial Committee’s first TV ads of the 2022 midterms cycle and show how potent S.1 (the Senate’s version of H.R. 1) is for Republicans — both in how it would overhaul the nation’s elections and as a messaging tool.”

SOUTH DAKOTA U.S. SENATOR — Politico reports that, while Sen. John Thune’s Republican colleagues are “certain” that he’ll seek a fourth term next year in this very red state, the incumbent is continuing to publicly refrain from talking about his plans. Thune, who is the number-two Republican in the chamber, noted that he usually announces his campaigns in the fall, saying, “In this day and age, these campaigns are so long. And I think they start way too early.”

Thune did add, “We’re moving forward doing all the things that you do. And at some point, we’ll make everything official.” However, Everett points out that his statement “sounds a little like two GOP senators, Roy Blunt of Missouri and Rob Portman of Ohio, who sent all the right signals about running again — until they bowed out.” Thune himself also admitted that serving in the Senate is “probably as challenging today as it’s ever been, given the political environment.”

One Republican who would like to see someone other than Thune holding that seat is Donald Trump. In December, during what turned out to be his last weeks on Twitter, Trump wrote, “RINO John Thune, ‘Mitch’s boy’, should just let it play out. South Dakota doesn’t like weakness. He will be primaried in 2022, political career over!!!” Trump then went on to call for Gov. Kristi Noem to take on the senator, but she quickly said no. We haven’t heard any notable politicians so much as mentioned as possible Thune primary foes since then.

Friese was a trauma surgeon who operated on then-Rep. Gabby Giffords and others after a gunman sought to assassinate the congresswoman in 2011. Friese got into politics soon after and narrowly unseated a GOP incumbent to win a Tucson-area state House seat in 2014, convincingly winning re-election ever since.

Friese’s new campaign quickly earned the praise of 314 Action, a group that seeks to recruit candidates with backgrounds in science to compete in Democratic primaries; while 314 said it wasn’t formerly endorsing, an unnamed source tells Politico that it plans to spend $1 million to help Friese win the nomination.

NORTH CAROLINA U.S. SENATOR — State House Speaker Tim Moore has reportedly been considering seeking the Republican nomination for next year’s Senate race, but he said this week that he planned on re-election to the legislature. That declaration seems unlikely to silence chatter about Moore’s 2022 plans, though, as it came in the midst of a strange story that only led to more questions about whether the speaker would be sticking around state government.

The News & Observer reports that Tom Fetzer, a powerful lobbyist who previously served as mayor of Raleigh and as state GOP chair, sent out a text over the weekend for, in his words, “putting together a fundraiser” to benefit House Majority Leader John Bell. Fetzer tried to entice would-be attendees by writing, “As Tim Moore has stated he is not seeking another term in the House, John is the odds on favorite to be Speaker in 2023.”

State law, though, forbids lobbyists from hosting fundraisers or soliciting contributions while the legislature is in session, as it is scheduled to be through July. Bell said that Fetzer wasn’t involved with the event, which has since been canceled, and that he hadn’t heard that Moore planned to leave the legislature. “It’s way too early for me to be talking about that,” said Bell about his boss’ future.

The paper writes that Moore, for his part, “texted an N&O reporter Tuesday to say he plans to seek a fifth term, which would be a record.” However, while Fetzer says he wasn’t actually involved in holding that ill-fated fundraiser (“I dictated the text into my phone and just sent,” he said), the lobbyist insisted that he’d made no mistake when he said Moore was on his way out. “I do think the speaker has informed people that he does not intend to seek another term,” Fetzer said, adding, “I don’t know that that’s a real surprise.”

The story did not mention the Senate race, but N&O reporter Brian Murphy tweeted it out saying, “Lots of news in this story, but one takeaway that will lead to lots of speculation: Is NC House Speaker Moore planning a run for U.S. House or U.S. Senate?” This is the first we’ve heard of the possibility that Moore, who is in place to play a major role during the upcoming round of redistricting, could run for the House.

Meanwhile, “Sen. Thom Tillis would have lost his 2020 reelection bid in North Carolina if it weren’t for revelations of an extramarital affair by his highly touted Democratic opponent, the senator’s pollster said,” the Washington Examiner reports.

Pollster Glen Borger said two things particularly worked against Cal Cunningham: “One is, it connected him to John Edwards — young, smart, lawyer, handsome. Not the family man you think he is. And then secondly, his whole story, essentially, was a lie.”

NEVADA U.S. SENATOR — The National Journal akes a look at Nevada’s surprisingly quiet Senate race, where no major Republicans have publicly expressed interest yet in taking on Democratic incumbent Catherine Cortez Masto, and she mentions a few possible contenders for the Republicans: Lt. Gov. Mark Hutchison, Clark County Sheriff Joe Lombardo, and state Sen. Ben Kieckhefer. “None have made public indications they are preparing bids.”

Ex-Attorney General Adam Laxalt, who was the party’s 2018 gubernatorial nominee, reportedly has been eyeing this contest, though he’s said nothing about his deliberations.

GEORGIA 10TH CD — The Atlanta Journal-Constitution reports that businessman Ames Barnett, the former mayor of the small community of Washington (pop. 4,000) is considering seeking the Republican nomination to succeed incumbent Jody Hice and “hopes to make a decision within the next week.”

The New Jersey Globe notes that Tavarez, who is also a retired police captain, has a more conservative pitch than most Democrats. Tavarez notably said in his kickoff, “Welfare and other social programs were designed to assist American families in need for a short period of time while they got themselves up on their feet. Over the years, these programs have evolved into a way of life, generation after generation.”

MISSOURI U.S. SENATOR — Former U.S. Attorney Tim Garrison said Thursday that he would not run in next year’s Republican primary.

Meanwhile on the Democratic side, former Gov. Jay Nixon didn’t rule out a Senate bid when asked, instead merely saying, “That’s not what I’m focused on right now.” Unnamed sources close to Nixon told the Missouri Independent about two weeks ago that he was giving some “serious thought” to a bid, but they still believed it was “highly unlikely he’ll give up life in the private sector.”