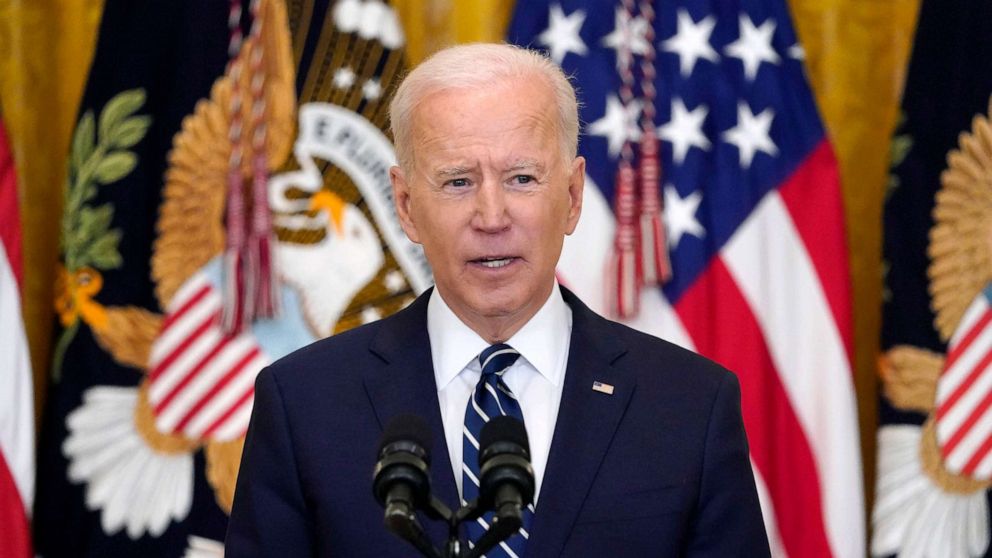 President Biden intends to announce an updated goal to administer 200 million COVID-19 vaccinations in his first 100 days in office during his first press conference on Thursday, a source confirmed to The Hill.

The President also “signaled he is open to making significant changes to the legislative filibuster in the Senate if it continues to be a roadblock to passing legislation on key agenda items like voting rights,” The Hill reports.

I have two main take-aways from this press conference. First, the right wing media and Republicans continue to make the bar so low for Biden that whenever he speaks, he hits a grand slam. Biden was portrayed to be hiding from the press because he is so mentally feeble and senile that he cannot possibly string together one or two sentences or a coherent thought. And then Biden holds fourth for over an hour with minute detail about immigration policy. LOL. Keep it up Republicans, and you won’t see the White House again until 2036 after President Harris completes her second term.

Second, the media, and specifically the White House Press Corps, clamored for this press conference for weeks, and these are the questions they wanted to ask? Two to three questions on 2024, repetitive questions on immigration, not a single question on COVID or the economy or the American Rescue Act or opening of schools?

Politico: “Chris Coons was flying back from Ethiopia to Washington this week when a staffer showed him a revealing picture on the plane’s radar: His aircraft and Secretary of State Antony Blinken’s were about to cross paths over the Atlantic Ocean.”

“He’s a senior Foreign Relations Committee member, but it’s highly unusual for a senator who doesn’t chair a panel to travel internationally on the president’s behalf.

“Mr. Manchin is the only senator on the Democratic side of the chamber who isn’t listed as a co-sponsor of the legislation. Last week he told reporters he was still reviewing it. All 49 other Senate Democrats back the bill, which would loosen state voter-identification requirements, expand mail-in voting and mandate online and same-day voter registration as well as early voting, among other steps.”

“Sen. Joe Manchin said that he favors a large infrastructure package that would be paid for in part by raising tax revenues — a point of contention between the two parties,” NBC News reports. Said Manchin: “I’m sure of one thing: It’s going to be enormous.”

NBC News: “He said there should be ‘tax adjustments’ to former President Donald Trump’s 2017 tax law to boost revenues, including by raising the corporate rate from the current 21 percent to at least 25 percent… He also suggested an ‘infrastructure bank’ paid for with revenues, potentially a value-added tax, that would be used for ‘rebuilding America.’”

“Notably, Manchin said the Republican resistance to higher taxes was not a ‘reasonable’ position in an infrastructure negotiation.”

Said Manchin: “Where do they think it’s going to come from? How are you going to fix America?”

Punchbowl News: “Sens. Bernie Sanders (I-VT) and Joe Manchin (D-WV) clashed over the amount by which Congress should increase the minimum wage, with Sanders arguing for $15 per hour, while Manchin remained set on $11. Neither budged at all, our sources told us, even arguing at one point over the cost of living in West Virginia.”

“Sen. Kyrsten Sinema (D-AZ) discussed her previous support for indexing minimum wage in Arizona. She suggested an immediate raise in the federal minimum to $11 per hour, which when indexed, would be worth roughly $15 by 2024. Sanders didn’t like this idea either.”

Los Angeles Times: “In a 7-4 decision, an en banc panel of the U.S. 9th Circuit Court of Appeals upheld a county law in Hawaii that has severely limited permits for open carrying of guns.”

“The decision is likely to help push the Supreme Court to review the issue.”

Wrote Judge Jay Bybee–a George W. Bush appointee–for the majority: “The government may regulate, and even prohibit, in public places — including government buildings, churches, schools, and markets — the open carrying of small arms capable of being concealed, whether they are carried concealed or openly.”

CNN: “Some conservatives who pushed and prodded for the Senate to quickly confirm Amy Coney Barrett to succeed the late Justice Ruth Bader Ginsburg on the Supreme Court last fall are rattled by what they have seen so far.”

Said Kelly Shackelford, president of the First Liberty Institute: “You have a lot of people in the conservative movement who are so far disappointed and a little despondent about those votes.”

“Jobless claims reached their lowest level of the pandemic, dropping to 684,000 last week,” the Wall Street Journal reports.  “The dip adds to evidence the economy is ramping up.”

Bloomberg: “The pandemic has created major headaches for the people whose job it is to determine the rate of inflation right now, and set the benchmarks that will be used to measure it in the future. They face two fundamental problems.”

“First, gauges like the Consumer Price Index are based on a ‘basket’ of stuff that Americans typically spent their money on in the past–which looks quite different from what people have been buying in the pandemic year.”

“Second, the standard way of compiling inflation numbers is to visit stores and check their asking prices. Researchers haven’t been able to do that during lockdown, leaving holes in the data.”

Sid Vilsack: “We saw 99 percent of the money going to White farmers and 1 percent going to socially disadvantaged farmers and if you break that down to how much went to Black farmers, it’s 0.1 percent.”

NBC News: “The survival of the Senate’s effective supermajority rule to pass bills could hinge on a working group of 20 senator that includes the most moderate members in both parties.”

“If the group can cut deals and deliver victories, it could become the model for lawmaking under President Joe Biden. If it fails, the Democratic-led Congress will face pressure to pursue partisan avenues to enact its ambitious agenda, including the simple-majority budget process and nixing the filibuster.”

New York Magazine: “Noem suddenly stumbled in her path along the far-right side of the political highway. After saying she was ‘excited’ to sign a bill banning the participation of transgender girls and women in female sports leagues — a favorite right-wing cause this year — she changed her mind, issuing a ‘style and form’ veto that allowed her to rewrite the legislation to exclude college sports and change some of the enforcement provisions.”

“She was immediately accused of caving to pressure from the NCAA, which opposes such bans under its inclusion policies, and Amazon, which has its own LGBTQ policies and had a major new facility planned for South Dakota.”

Bloomberg: “New York is ready to legalize recreational marijuana. The state would impose special pot taxes and prepare to license dispensaries under an agreement reached by Gov. Andrew Cuomo and legislative leaders.”

“High-level members of the state Department of Health were directed last year by Gov. Andrew M. Cuomo and Health Commissioner Dr. Howard Zucker to conduct prioritized coronavirus testing on the governor’s relatives as well as influential people with ties to the administration,” the Albany Times Union reports.

“Members of Cuomo’s family including his brother, his mother and at least one of his sisters were also tested by top health department officials — some several times.”

Washington Post: “The use of state resources to benefit people close to the governor raises serious ethical questions, experts said. New York law prohibits state officials from using their positions to secure privileges for themselves or others.”

“Vice President Kamala Harris will be the White House’s point person on immigration issues at the nation’s southern border, President Joe Biden announced Wednesday, tasking her with stemming the rising tide of migrants, many of them unaccompanied children, arriving in the U.S.,” Politico reports.

Said Biden: “I can think of nobody who is better qualified to do this.”

Dylan Matthews: “Minneapolis Fed economist Andrew Goodman-Bacon recently dropped a stone-cold classic of the genre, examining how the rollout of Medicaid in the late 1960s affected people who were children at the time.”

“If you got health insurance through the program as a child, he found, you were less likely to die young; you were likelier to be employed and less likely to have a disability as an adult; and all these benefits actually wound up saving the government money.”

“The Senate took its first steps on Wednesday to advance one of Democrats’ top legislative priorities, convening an opening hearing on a sweeping elections bill that would expand voting rights and blunt some Republican state legislators’ efforts to restrict access to the ballot box,” the New York Times reports.

“Chock-full of liberal priorities, the bill, called the For the People Act, would usher in landmark changes making it easier to vote, enact new campaign finance laws and end partisan gerrymandering of congressional districts. The legislation passed the House along party lines earlier this month. It faces solid opposition from Republicans who are working to clamp down on ballot access, and who argue that the bill is a power grab by Democrats.”

The Hill: Senate panel dukes it out over voting rights.

“A leader among the paramilitary group the Oath Keepers said he was coordinating with the Proud Boys about how their members would work together at the US Capitol on January 6,” CNN reports.

“Facebook chats made public in the filing by the Justice Department show Kelly Meggs, a leader among the Oath Keepers, discussing his communications with Proud Boys leadership and how he had ‘orchestrated a plan’ with the group.”

“By votes of 23-10 in the Senate and 62-35 in the House, lawmakers overturned DeWine’s earlier veto of a bill that will give them more power in rejecting the governor’s moves.”

Wall Street Journal: “President Biden has yet to name hundreds of administration officials requiring Senate confirmation to military, diplomatic and intelligence posts, making it unlikely that his security agencies will be fully staffed until fall.”

A resolution designating the Bible as the Tennessee state book cleared a House committee despite constitutional concerns from several lawmakers, the Tennessean reports.

Amy Walter: “On paper, Democrats have a 222-213 margin in the House. But, just 219 Democrats are currently serving in Congress. Three Democrats — Reps. Cedric Richmond (LA-02), Deb Haaland (NM-01), and Marcia Fudge (OH-11) — have been tapped to serve in the Biden Administration. All three represent safe Democratic seats. But, only one (LA-02) will be filled before May (two Democrats face off in an April 24 run-off). The New Mexico special election isn’t until June 1. In Ohio, the special election to fill the Cleveland-based 11th doesn’t occur until November 2.”

“There’s also the possibility that some other Democratic House members are plucked for political positions around the country. In California, for example, Rep. Adam Schiff (CA-28) is in the mix to replace HHS Sec. Xavier Beccera as the state’s Attorney General.”

“This means that at least until November, House Democratic leadership can afford to lose just two to four Democratic votes. In other words, while Sen. Joe Manchin gets outsized attention for his single-handed ability to stymie Democrats’ agenda, less attention has been given to the three to five Democrats who could hold up legislation from even getting to the Senate.”