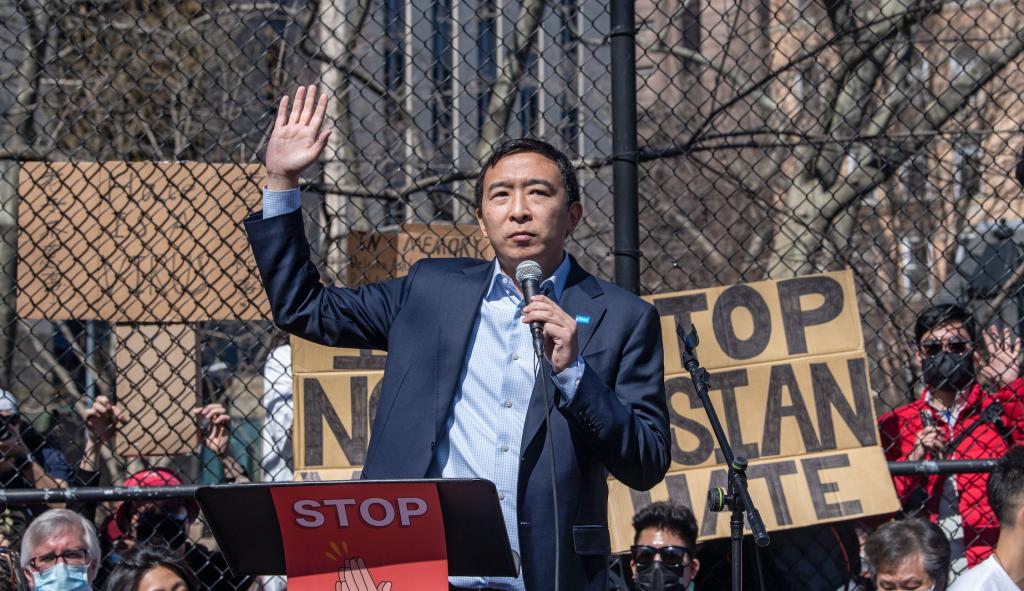 A new Fontas/CODA poll in New York City finds fully 50% of likely Democratic voters are undecided in the mayoral primary.

Said pollster George Fontas to the New York Times: “There is no front-runner. It’s an open race. We have no idea what’s going to happen in the next three months, and if history shows us anything, it’s that three months is an eternity in a New York City election.”

The poll shows 2020 presidential candidate Andrew Yang leading Brooklyn Borough President Eric Adams 16-10. The firm has changed one important part of its methodology since its February survey, which had Yang beating Adams 28-17. The earlier poll included a brief description of each candidate while this one just lists their names, which helps explain why the proportion of undecideds skyrocketed from 19% to 50%.

Yang’s campaign, meanwhile, has released another poll from Slingshot Strategies that shows him outpacing Adams 25-15, with City Comptroller Scott Stringer at 12%. This survey, which the pollster tells us was in the field March 12-18, is very similar to its January survey finding Yang up 25-17.

FiveThirtyEight released their updated pollster ratings, with four groups receiving an A+:

Politico: “Buoyed by large donations from New York City billionaire Michael Bloomberg and a South Florida health care executive, Florida Democrats have stabilized their finances and are poised to move ahead with ambitious plans to expand their operations ahead of the 2022 elections.”

“Florida Democratic Party Chair Manny Diaz helped raise $2 million in the two months since he took over — enough to let the party wipe out much of its debts. Party officials say that Bloomberg gave $500,000, while Mike Fernandez, who was once a large Republican donor before President Donald Trump was elected, kicked in $100,000.”

This constituency, which includes Brownsville in the Rio Grande Valley and rural counties to the north, went for Joe Biden 52-48 four years after it supported Hillary Clinton by a hefty 59-38 margin in 2016. This was the biggest shift toward Trump of any congressional district in Texas, and his third-largest improvement in the entire nation. Vela himself won re-election by a comfortable 55-42 against an underfunded Republican in a contest that attracted very little outside spending, but the dynamics of an open seat race could be very different.

Further muddling the picture for 2022 is redistricting. While Texas Republicans were ecstatic about their gains with Latino voters, they saw an even broader disintegration in their former suburban strongholds across the state that’s left many of their incumbents on the brink. While the GOP will have full control over redistricting for the coming decade once again, Republicans in the legislature will have to make many hard choices about which districts to prop up and which to cut loose.

Cascos previously served as county judge, a post that is similar to a county executive in other states, in Cameron County, which is home to more than half of the residents in the current 34th District. In 2015, Cascos resigned to accept an appointment as secretary of state, a stint that lasted for two years. Cascos tried to regain his old job as county judge from Democratic incumbent Eddie Treviño in 2018 but lost the general election 60-40.

An unnamed source close to the attorney general told the Kansas City Star’s Bryan Lowry that Greitens’ kickoff had no impact on the timing of Schmitt’s own launch. Lowry, though, notes that, by getting in early, Schmitt may be trying to establish himself as the main intra-party adversary for Greitens, whom national Republicans reportedly fear could endanger their hold over this seat should he win the nomination.

However, while Schmitt may be hoping that his entrance could deter other Republicans from running, a former Greitens adversary is also making it clear he’s thinking about diving in. On Tuesday, wealthy businessman John Brunner posted a photo of himself with Kentucky Sen. Rand Paul captioned, “Does Rand Paul need another freedom fighter in the US Senate?” Brunner lost the 2012 primary for Missouri’s other Senate seat to the infamous Todd Akin before he campaigned for governor in 2016. Greitens, though, defeated Brunner 35-25 after a truly ugly contest.

NEBRASKA GOVERNOR — Republican Sen. Deb Fischer confirmed Wednesday that she was considering running in next year’s open seat race for governor, though she said she was “in no hurry” to decide. That could be very unwelcome news for other Republicans looking at this race, as Fischer would be a very prominent contender who could deter others from running.

MICHIGAN GOVERNOR — After running two formidable yet failed campaigns for the U.S. Senate, John James (R) is reportedly considering a run for governor of Michigan, the Detroit News reports. It would be another steep battle for James, though. According to a recent Detroit News poll by the paper, Gov. Gretchen Whitmer (D)had a 58% approval rating.

James has spent the last several weeks attacking Whitmer in media appearances, but he hasn’t said if he’s thinking about challenging her. Some Republicans would prefer he run for the House after redistricting because they believe it would be easier than a third statewide campaign, and that James’ 2022 “decision could still be months away.”

CALIFORNIA GOVERNOR — Probolsky Research, a firm that has worked for Republicans in the past but says it has no client in this year’s recall campaign, has released a poll that finds likely voters saying they’d vote against ousting Democratic Gov. Gavin Newsom by a 53-35 margin.

The recall has not yet been officially scheduled, much less declared, though, which makes it especially tricky to determine who is likely to turn out. Probolsky asks the same question among all voters and also finds a plurality opposed to recalling Newsom, but by a much-smaller 46-40 spread.

Politico: “The dance around the recall forces California Democrats to balance two elemental political motivations: self-preservation and opportunism. Any ambitious Democrat who runs and fails would topple off the career ladder into political oblivion. No one has forgotten the implosion of Bustamante after he jumped into the 2003 race. But the recall also offers a tantalizing chance to leapfrog into the governor’s office.”

ARIZONA U.S. SENATOR — Extremist Rep. Andy Biggs recently told the Wall Street Journal that he would decide by the end of the month whether to seek the Republican nomination to take on Democratic incumbent Mark Kelly.

Politico: “Major donors are convening at former President Donald Trump’s Mar-a-Lago resort next month for a two-day gathering to talk about what went wrong in 2020 — and to build a big-dollar network to take back power.”

“Senior Republicans say they’ve come to acknowledge a massive deficit: the lack of a dark-money infrastructure that can be pivotal to influencing elections and policy fights. Organizers say the gathering is aimed at creating a long-term blueprint for funding policy-focused nonprofits in order to compete with liberals who, through mega-donors like George Soros and Tom Steyer, have developed a well-oiled system for routing cash to a web of big-spending advocacy groups.”

“Donald Trump has been in talks with no-name app vendors as he contemplates partnering with an existing platform to create his own social media network,” Axios reports.

“Among the social networking apps the former president and his digital adviser Dan Scavino have homed in on is a relatively unknown platform called FreeSpace.”

New Yorker: “Douglas Burns, a longtime newsman and political independent who co-owns the Carroll Times Herald, is similarly pessimistic. As a reporter, he watched any number of Iowa Democrats run what he considered solid, mainstream campaigns, attentive to voters and their local concerns, only to lose.”

Said Burns: “Unless you live here, I don’t think you can appreciate the level of rural white grievance. We think that you can win people over with the issues. I’m not sure that you can.”