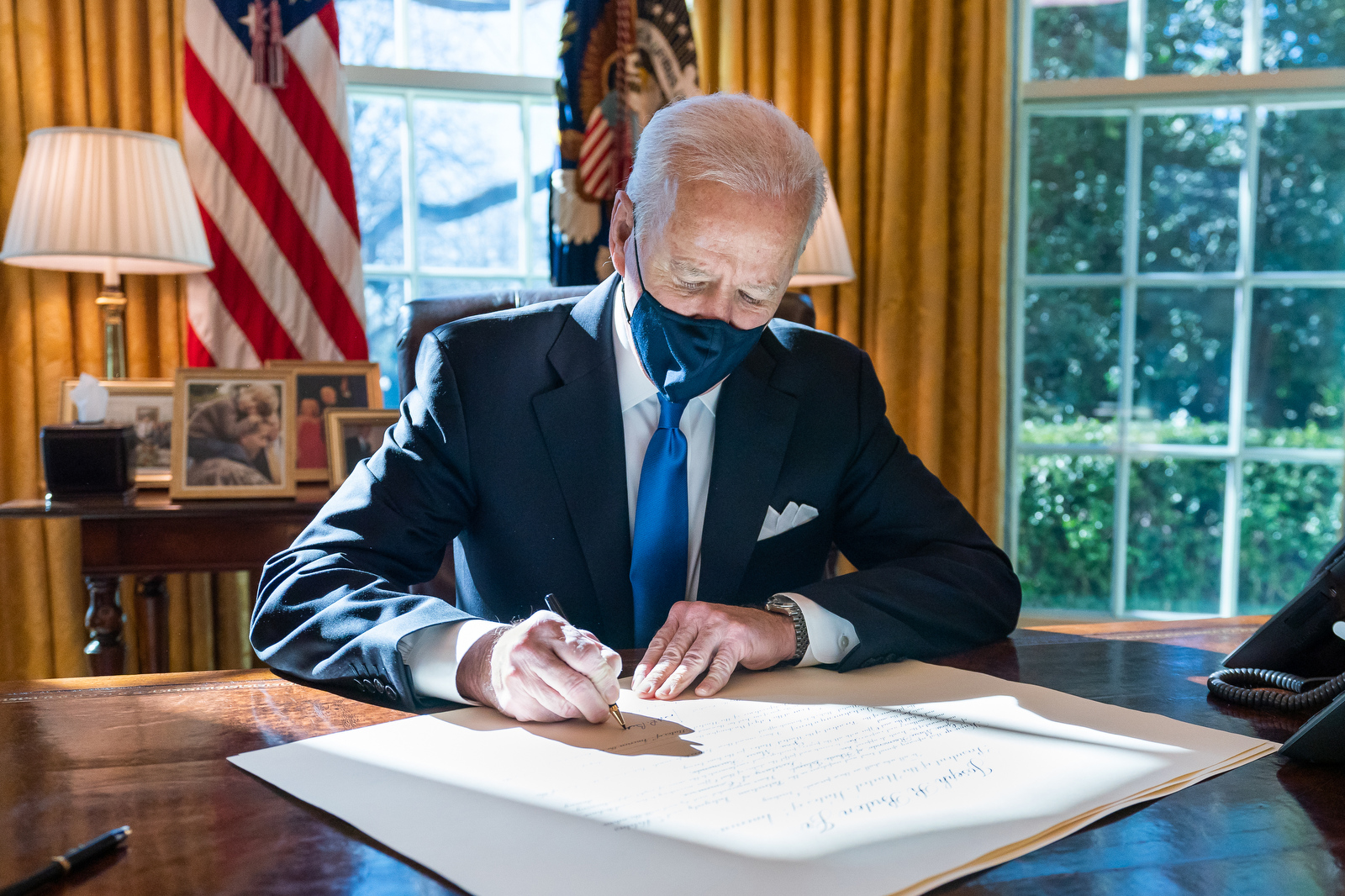 Washington Post: “Conducted in partnership with two Democratic analytics firms – Kinetic21 and BlueLabs – Run for Something analyzed 3,953 precincts within 61 counties in Arizona, Florida, Georgia, Kansas, North Carolina, New York, Ohio and Texas. The study compared precincts where a Republican was running on the ballot for state House or Senate uncontested with places where both Republicans and Democrats were running.

“The study found that even if the Democrat didn’t win, having a contested state legislative race provided anywhere from a .3 percent to 1.5 percent boost for Biden.”

A new OH Predictive Insights poll in Arizona finds Sen. Kirsten Sinema’s (D-AZ) favorability is now underwater at 39% to 40%. Sinema is viewed favorably by just 50% of Democratic voters, but 30% of her party views her unfavorably. Sinema is still upside down with Republicans by 22%. In contrast, Sen. Mark Kelly (D-AZ) has a 79% to 11% favorability rating with Democrats.

TEXAS 34TH CD — Rep. Filemon Vela, who represents a southern Texas border district and is vice chair at the Democratic National Committee, will not run for reelection to the House next year, Axios reports.

Vela won his seat with 55% in 2020 and is the first Texas Democrat to decide to leave the House ahead of restricting next year.

Sen. Ted Cruz (R-TX) told an invitation-only call — which was secretly recorded — that Democrats are trying to expand voting rights to “illegal aliens” and “child molesters” and Republicans must do all they can to stop them, the AP reports.

He added that if “they push through far-reaching election legislation now before the Senate, the GOP won’t win elections again for generations.”

“President Joe Biden is rewarding Atlanta Mayor Keisha Lance Bottoms, one of his staunchest allies, with the first campaign fundraiser he’s headlined since he was sworn into office two months ago,” the Atlanta Journal Constitution  reports.

Cal Matters: “A run-of-the-mill election for state office in California follows a predictable two-step. First, every candidate crowds onto a single ballot and voters cast their ballots for whomever they like — regardless of party. Next, the top two winners from the first round go head-to-head in a second and final contest.”

“That ‘top-two’ set-up ensures that the candidate who wins will have received more than 50% of the vote. The will of the majority rules, guaranteed.”

“Recall elections offer no such guarantee. Voters are first asked whether they would like to give the incumbent the boot. Then, in a second question, they are asked who ought to be the replacement. Under California law, incumbents can’t run to replace themselves. (So Governor Newsom is not on the ‘replacement’ ballot).”

“If more than 50% of voters opt for a ‘yes’ on the recall question, whoever comes first on the replacement list is immediately hired as the state’s next chief executive.”

“The Democratic National Committee said it raised the most money it ever has in February in a non-presidential election year, $8.5 million, according to a DNC spokesperson,” Politico reports.

GEORGIA U.S. SENATOR — Rep. Buddy Carter and banking executive Latham Saddler are each considering entering next year’s Republican primary to take on Democratic Sen. Raphael Warnock. Neither Republican has publicly expressed interest yet in running in what could be a crowded nomination fight to face Warnock, who is defending a Senate seat that the party badly wants to take back.

The more familiar name is Carter, who won a competitive 2014 primary for a safely red seat along the Georgia coast, the 1st District, and has not been seriously threatened since then. The congressman has spent the last few years as a loyal Trump supporter, though he’s rarely generated much attention for himself.

Saddler, meanwhile, does not appear to have run for office before, though it sounds like he has some connections. The Navy SEAL veteran went on to serve as a National Security Council aide in the Trump White House, and last year, he joined the board of Partnership for Inclusive Innovation, which the Atlanta Business Chronicle called “a public-private partnership dedicated to making Georgia the tech capital of the Eastern seaboard.”

Several other Republicans are eyeing this race including two who unsuccessfully competed in the recent special election, former appointed Sen. Kelly Loeffler and ex-Rep. Doug Collins.

OHIO U.S. SENATOR — We hadn’t heard Republican Rep. Mike Turner say much about a possible Senate run since late January, when he expressed interest right after incumbent Rob Portman surprised the political world with his retirement announcement, but the Dayton Daily News reports he’s very much still considering. The congressman himself was more evasive, telling the paper only, “Nothing to say right now.”

Republicans could have a much harder time holding Turner’s Dayton-area seat if he seeks a promotion, though the party may have the chance to strengthen their hold over the seat during the upcoming round of redistricting. In its current form Ohio’s 10th District, which includes all of Dayton, backed Donald Trump 51-47 four years after supporting him by a larger 51-44 spread. Turner, though, has never failed to win re-election by double digits, and he won his 10th term last year by defeating a well-funded Democrat 58-42.

FLORIDA GOVERNOR — Former Rep. David Jolly, a Republican turned anti-Trump independent, said Wednesday that he would decide later this year whether to run for governor. Jolly sounds like he very much plans to do it, though, saying, “I likely will be an independent candidate for governor in 2022.”

TEXAS GOVERNOR — Outgoing Fort Worth Mayor Betsy Price told the Washington Post Thursday that she wasn’t going to challenge Gov. Greg Abbott in the Republican primary, though she acknowledged that unnamed people had asked her to think about it. Price also didn’t commit to supporting the incumbent, saying that, while it’s “more than likely,” she “will just see who is in the race.”

VIRGINIA GOVERNOR — Virginia Republicans have somehow found yet another way to showcase just why holding nominating conventions instead of primaries can be so terrible, but this time, it’s not about site selection. On Wednesday, the Virginia Scope’s Brandon Jarvis released Ring camera footage of a woman attempting to convince a homeowner to sign up to be a delegate for the May 8 convention. It’s normal for campaigns to try to pre-register supporters for the party gathering, a process that involves collecting personal information, but what happened next wasn’t.

As Jarvis notes, though, there is no such thing as “Vanguard Field Services.” Jarvis explains that a group called Vanguard Field Strategies is part of the GOP consulting giant Axiom Strategies, which is not employed by the state party―but is employed by wealthy candidate Glenn Youngkin.

The story brought a furious reaction from Stephen Kurtz, a party official backing rival candidate Pete Snyder, who declared that Youngkin has “failed to address the fraud, the lies, and the fact that we don’t know the extent of this abuse of trust.” Youngkin’s campaign, for its part, called this incident “unacceptable,” while  Vanguard said, “All of our staff were pulled from the field today to engage in an intensive re-training to ensure nothing like this happens again.” Other Republicans have shared similar stories from canvassers who later admitted they were there on behalf of Youngkin.

ARIZONA 2ND CD — On Friday, state Sen. Kirsten Engel became the first notable candidate to announce she would run to succeed retiring Rep. Ann Kirkpatrick, a fellow Democrat. Engel, who works as an environmental law professor at the University of Arizona, was elected to the state House in 2016 from a Tucson-based seat, and she won a promotion to the upper chamber last year.

The Tucson Weekly also mentions Tucson Mayor Regina Romero as a potential Democratic contender, though he also notes that there’s chatter she could take a post in the Biden administration instead. Nintzel additionally name-drops Pima County Supervisor Steve Christy, who is the one Republican on the five-member body, as a possibility. The current version of the 2nd District backed Biden by a tough 55-44, though no one knows how redistricting will play out here.