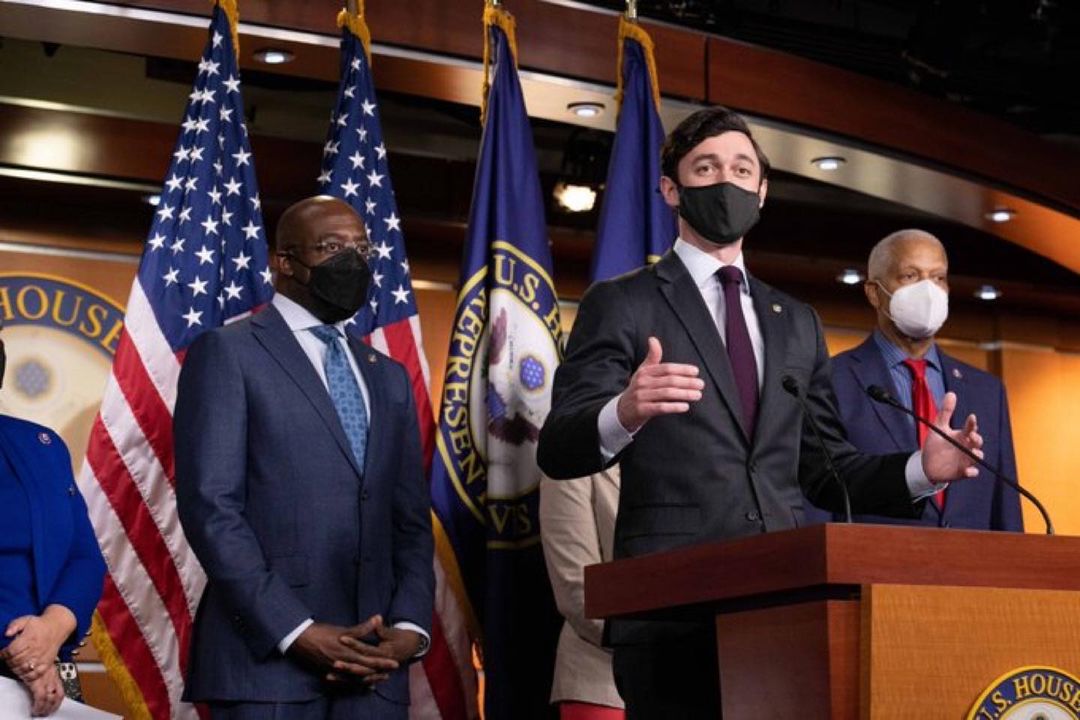 A new Quinnipiac poll finds that 49% of voters in New York say that Gov. Andrew Cuomo (D) should not resign while 43% say he should resign.

Earlier this month voters thought Cuomo should not resign bu 55% to 40%.

A new Navigator Research survey finds 59% of American voters support a new infrastructure plan from the Biden administration, while just 14% oppose it and 27% are still unsure. This includes 78% of Democrats, 54% of independents and and a 39% plurality of Republicans.

The support extends across a broad range of infrastructure proposals, from rebuilding highways and bridges to investing in clean energy.

But despite this popularity, the key stumbling block will once again be the filibuster. The plan would need at least 10 Republican senators to invoke cloture to bring the plan to the floor for a final vote.

To win over that many Republicans — if it’s even possible — Democrats would need to make major concessions. Republicans will seek to limit the scope of the plan and oppose most tax increases to pay for it. That’s why there will be a push by Democrats to pass the bill through the budget reconciliation process which only requires 50 votes in the Senate, with Vice President Kamala Harris breaking the tie.

David Hopkins: “The cancel-culture preoccupation isn’t necessarily a mistake for Republicans—at least if their main objective is electoral success, not substantive influence. Polls have consistently shown that Biden’s COVID response efforts gain wider popular approval than any other major policy or presidential quality. Meanwhile, as Harry Enten of CNN recently pointed out, the assertion that political correctness has ‘gone too far’ receives broader agreement from the American public than the Republican Party’s positions on many other political issues.”

“Rather than trying to convince voters that legislation containing immediate four-figure cash payments for everyone in their family is actually a bad idea, it’s strategically easier to simply move the partisan battle to more favorable terrain.”

Amy Walter: “What’s also interesting about 2022 is that for the first time in 12-years, the person who sits in the White House does not enjoy a cult of personality. Barack Obama was the first Black president who motivated a generation of younger voters and voters of color. Donald Trump energized his cohort of voters — some of them former Obama voters — with his ‘Make America Great Again’ appeal.”

“Both could draw big crowds and celebrity endorsements. But, they could not transfer their ‘coalition’ to any other candidate — especially down-ballot candidates in the midterm elections. Despite President Obama’s admonishment of supporters at his rallies (‘don’t boo, vote,’ he often told them), they failed to do that in midterms, which cost Democrats the House in 2010 and the Senate in 2014. President Trump’s post-election rallies in Georgia weren’t effective in saving the Senate.”

“U.S. Postal Service investigators found no evidence to support a Pennsylvania postal worker’s claim that his supervisors had tampered with mail-in ballots, according to an inspector general’s report — allegations cited by top Republicans to press baseless claims of fraud in the presidential election,” the Washington Post reports.

LOUISIANA GOVERNOR RECALL — “Efforts to remove Louisiana Gov. John Bel Edwards from office because of complaints about his coronavirus restrictions and mask mandate have failed,” the Associated Press reports.

“The Louisiana Secretary of State’s Office said Friday that all parishes but one have completed counting signatures on a petition seeking to recall the Democratic governor, and the numbers have fallen far below what is needed to force a recall election.”

Axios: “The immediate and intense political fallout over the insurrection pushed scores of companies to announce a pause or end to political donations. New numbers suggest an even larger chilling effect, with companies that had been quiet publicly also forgoing donations.”

Republican Rep. Jody Hice said Wednesday that he could decide “within the next few days” if he’ll launch a primary campaign against Secretary of State Brad Raffensperger, who infuriated the far-right when he refused to go along with Donald Trump’s demand to “find 11,780 votes” to overturn Joe Biden’s win in Georgia.

One of Raffensperger’s loudest intra-party critics has been Hice, who was a conservative radio host before he was elected to his safely red House seat in east-central Georgia in 2014. The congressman last month used his CPAC panel titled “Who’s Really Running the Biden Administration” to spread conspiracy theories, declaring, “I guarantee you, Georgia is not blue, and what happened this election was solely because of a horrible secretary of state and horrible decisions that he made.”

Hice is not the only Republican looking to take down Raffensperger, though. The Atlanta Journal-Constitution reports that former Alpharetta Mayor David Belle Isle, who lost the 2018 primary runoff to Raffensperger 62-38, will announce his second campaign Monday. There’s also been speculation for months that former state Rep. Vernon Jones, a Trump-supporting ex-Democrat who joined the Republican Party right after the 2020 election, could also take on the incumbent.

New York Times: “Passing new restrictions on voting — in particular, tougher limits on early voting and vote-by-mail — is now at the heart of the right’s strategy to keep donors and voters engaged as Mr. Trump fades from public view and leaves a void in the Republican Party that no other figure or issue has filled. In recent weeks, many of the most prominent and well-organized groups that power the G.O.P.’s vast voter turnout efforts have directed their resources toward a campaign to restrict when and how people can vote.”

“Just as notable as the brand-name conservative groups that are raising money off Mr. Trump’s revisionism — Susan B. Anthony List, the Heritage Foundation, the Family Research Council, Tea Party Patriots — are some of the heavy hitters that are sitting this fight out. Americans for Prosperity, the political organization funded by the Koch fortune, is not supporting the efforts to pass more ballot access laws, nor are other groups in the multimillion-dollar Koch political network.”

OHIO 11TH CD — Ohio Governor Mike DeWine (R) announced that the special election for the House seat being vacated by HUD Secretary Marcia Fudge will be held on Nov. 2, 2021, with the primary being held on Aug. 3, 2021.

COLORADO GOP — Axios: [Colorado’s] Republican Party lost more than 63,000 voters since the 2018 election when Democrats won all statewide offices and the General Assembly in a historic landslide, state data shows.”

“That equates to a 2.6% decline as a share of registered voters.”

“Bealsey lost a close election for chief justice in 2020, losing to Republican Paul Newby by 401 votes. It was the third statewide election for Beasley, who won a seat on the court of appeals in 2008. She was appointed to the state Supreme Court in 2012 and then won her seat in 2014.”

ALABAMA U.S. SENATOR — Rep. Mo Brooks (R-AL) will announce Monday his run for Senate alongside former Trump aide Stephen Miller, who has been advising him. When asked if Donald Trump is supportive of the Senate run, Brooks told CNN: “I think that’s for him to announce at the appropriate time.”

TEXAS 6TH CD — “With less than two months to go, nearly half of voters have not chosen a candidate in the upcoming special election in Texas’ 6th District,” according to new polling obtained by Inside Elections.

“Texas conducts special elections via jungle primary, meaning that all candidates — there are 23 of them in this race — will appear together on the ballot. If no candidate wins a majority, then the top two best-performing candidates, regardless of party, advance to a runoff.”

Meanwhile, Bean has earned an endorsement from the AFL-CIO of Tarrant County, which is by far the largest and bluest of the three counties in this district.

“We really have no idea whether either the Republican or the Democratic nominations will be competitive.”