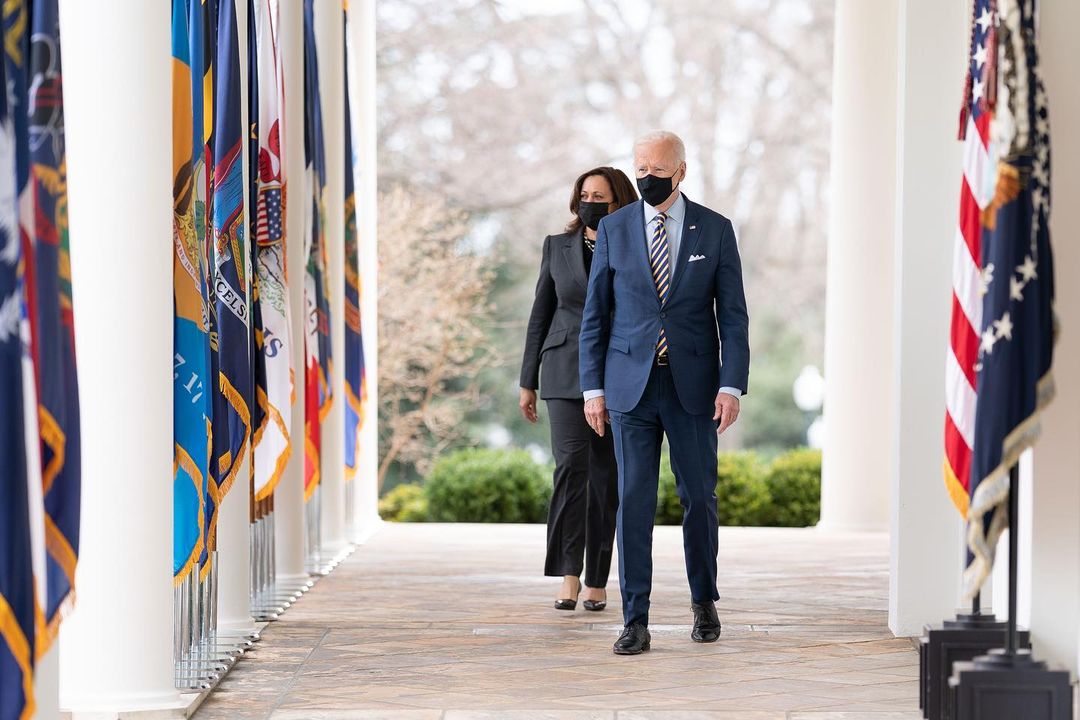 “The Biden administration is considering sending some AstraZeneca Covid-19 vaccine doses stockpiled and waiting for official usage approval in the US over the border to Mexico and Canada,” CNN reports

“Intense discussions are taking place following a request for doses from both countries and, for Mexico at least, an agreement could be announced as soon as Friday.”

Reuters: “Mexico will receive 2.5 million does of the vaccine and Canada will receive 1.5 million doses … The deal to share the vaccine, which is still being finalized, does not affect President Joe Biden’s plans to have vaccine available for all adults in the United States by the end of May.”

Indeed, the AstraZeneca vaccine is not approved for use in the US yet. So if we can’t use it, might as well give it away.

“A dozen Republicans voted against a resolution honoring U.S. Capitol police for their efforts to protect members of Congress during the insurrection on January 6,” The Guardian reports.

“The House voted 413 to 12 on Wednesday to award congressional gold medals, Congress’s ‘highest expression of national appreciation,’ to all members of the Capitol police force.”

“The Republicans who opposed this honor included Marjorie Taylor Greene of Georgia, Matt Gaetz of Florida and Thomas Massie of Kentucky.”

Politico: “Alarmed by a growing number of threats, harassment and scenes of violence at government buildings, lawmakers in both parties are seeking clarity from election agencies on whether they can spend campaign dollars and taxpayer money on security and personal protective equipment — everything from body armor to panic buttons at home.”

Politico: “What seemed like a no-brainer at the time — a 9/11-Commission-style review of the origins of the mob, the white nationalists who joined it and the security failures that allowed it to briefly occupy the Capitol — has instead become the latest theater for dysfunction on Capitol Hill as the two parties squabble over the panel’s scope and partisan balance.”

The FBI has released a batch of videos showing suspects wanted for attacking Capitol police officers on January 6.

“Led by Ken Paxton of Texas and Austin Knudsen of Montana, the states said Biden had overstepped his authority when he revoked the permit for the Keystone pipeline on his first day in office.”

“Inside the White House, there is a growing belief that the president’s agenda will be at risk—and the Senate itself at risk of irrelevance—if the current rules remain in place,” Politico reports.

“At the heart of their argument is a proposition: if the filibuster is used to stymie voting and civil rights legislation, the minority in the Senate will remain protected to the detriment of minority voters.”

Sen. Lindsey Graham (R-SC), quoted by The Hill, threatening to make full use of the so-called “talking filibuster” if Democrats reform the Senate procedural move.

That’s the plan, Lindsey. Can’t wait to see you fall over.

National Review: “Senator Mitch McConnell warned yesterday that if Democrats abolish the filibuster, Republicans would take advantage when they regain the majority. He listed right-to-work legislation, defunding of Planned Parenthood, and concealed-carry reciprocity as some items that a majority-Republican Senate would pass.”

“I’m reminded of the famous interrogation scene from The Dark Knight. As Batman subjects him to an increasingly brutal beating, the Joker laughs it off: ‘You have nothing – nothing to threaten me with.’”

Associated Press: “Republicans still divided over former President Donald Trump’s legacy are seizing on his signature campaign issue, turning their focus to immigration as they try to regain the political upper hand.”

“Faced with President Joe Biden’s early popularity, good news about vaccinations, and Americans’ embrace of the COVID-19 relief bill Washington Republicans opposed, the GOP is leaning in on the highly charged issue amid a spike in border crossings. They hope immigration can unite the party heading into next year’s elections, when control of Congress is at stake.”

Thomas Edsall: “The sheer magnitude of the funds released by the American Rescue Plan, the White House is gambling, will shift voters’ attention away from controversies over Dr. Seuss, who can use which bathroom and critical race theory. So far, the strategy is working.”

President Joe Biden is expected to nominate former Sen. Bill Nelson (D-FL) to lead NASA, settling on a longtime booster of the space program to lead the agency’s return to the moon, Politico reports.

“The district attorney is sifting through millions of pages of his tax records. The state attorney general has subpoenaed his lawyers, his bankers, his chief financial officer — even one of his sons,” the Washington Post reports.

“And that’s just in New York. Former president Donald Trump is also facing criminal investigations in Georgia and the District of Columbia related to his efforts to overturn the 2020 election. And Trump must defend himself against a growing raft of lawsuits: 29 are pending at last count, including some seeking damages from Trump’s actions on Jan. 6, when he encouraged a march to the Capitol that ended in a mob storming the building.”

“Despite the state attorney general’s ongoing investigation into sexual harassment allegations against Gov. Andrew Cuomo, senior aides to the governor said they are also conducting their own ‘parallel review’ of a female aide’s recent account of being groped by Cuomo at the Executive Mansion late last year,” the Albany Times Union reports.

John Harris: “In this generation, Trump and other politicians have shown there is another choice: Contemptuously challenge the legitimacy of any court that would presume to judge you, and take advantage of the reality that there is no elite consensus that transcends partisan and ideological divides on any subject.”

“Cuomo’s thought bubble isn’t hard to read: Hey, what worked for Trump might work for me.”

Newsweek: “With Trump contradicting QAnon theories that the vaccine is dangerous and the coronavirus is a hoax, many of its supporters came up with ways to cope with the latest cognitive dissonance, including suggesting it was not actually Trump speaking to Fox.”

Said one QAnon supporter: “I just listen to it again and I have to agree it doesn’t really sound like him. Whoever it was was very good at imitating him though.”

Playbook: “We should pause for a second to reflect on the power of the Congressional Progressive Caucus (“CPC”) right now. A few years ago, the group was viewed as a bunch of radicals with no clout. Now they’re flexing and commanding the attention of the White House.”

“Biden called Jayapal after the American Rescue Plan passed, and she told him she wants these kinds of meetings to happen regularly. Now CPC has not one but two meetings at the White House in a span of a few days (another is expected by the end of the week).”

Los Angeles Times: “The democratic socialist who once encapsulated his time in Congress by writing a book titled ‘Outsider in the House’ has now become the consummate insider in the Senate. The Bernie who honeymooned in the Soviet Union, who declared the Democratic Party hopeless, who sparked a revolt against an Obama administration tax deal during an 8 ½-hour filibuster, has transitioned into the Bernie orchestrating trillion-dollar deals.”

“The 79-year-old who lost to President Biden in the 2020 primary is following a path carved out by earlier political celebrities such as Republican John McCain and Democrat Edward M. Kennedy, who bounced from defeat in their insurgent White House bids to final acts as legislative maestros.”

“Democrats are zeroing in on raising the corporate tax rate from its current 21% to 28% as one of the easiest ways to find new revenue for an infrastructure package,” Axios reports.

Politico: “Democrats have yet to use the Congressional Review Act to claw back any Trump-era regulations as of mid-March. The 25-year-old law allows the congressional majority party to essentially veto out regulations established during the waning days of an administration without facing a Senate filibuster.”

“Nearly two months into the new administration, time is running out to use the maneuver given the constraints of using the so-called CRA within 60 legislative days of a new regulation.”

Rep. Josh Harder (D-CA) “pulled off an upset to defeat a Republican in the 2018 election, but in 2020 he did something more impressive: He won again,” the San Francisco Chronicle reports.

“Harder was one of only a handful of swing-seat Democrats to survive last year’s elections, which ended with a sharply reduced House majority for the party.”

“Harder, 34, and those who know him credit his success to focusing on issues that matter to his district and efforts at bipartisanship. Democrats hope he can serve as a model for their candidates in next year’s midterms, which historically are rough for the president’s party.”

The Los Angeles Times has the backstory of how Rep. Katie Porter (D-CA) lost her seat on the House Financial Services Committee.

Playbook: “This story is another reminder of how different the Democratic Party is from the GOP — not merely on ideals but in terms of how they operate on Capitol Hill. Congressional Republicans routinely cause problems for their leadership; it’s almost expected. But Democratic members can be punished for stepping out of line.”

Derek Thompson: “Mask ordinances and social distancing (and, now, vaccines) have almost surely saved many thousands of lives. But before any of these remedies came about, America’s inability to track the virus allowed it to establish a base of infection and an exponential trajectory.”

“The testing fiasco was uniquely responsible for launching the U.S. into the national nightmare of an unchecked explosion in cases. More than any other policy failure, it turned what might have been an acute national horror into a tragedy that took more lives than either world war.”

First Read: “The era of small government is over. And it’s been over for a while now.”

“That’s the undeniable conclusion after House Republicans — in a secret-ballot vote on Wednesday — reversed their ban on earmarks for projects in spending bills that end up benefitting their congressional districts.”

“This GOP reversal on earmarks comes after congressional Republicans voted for trillions in spending to combat the coronavirus during the Trump presidency (though not during the Biden presidency), after Trump himself continues to support $2,000 stimulus checks, and after the GOP has essentially stopped messaging against Biden’s Covid-19 relief package.”

Tim Miller: “Maybe if you’re still living in the ’90s. But according to polling analysis of his executive orders, pretty much all of them have majority support . . . except shutting down drilling in parts of Alaska and the keystone pipeline.”

“And the latest COVID bill, the American Rescue Plan, has overwhelming support, including from 4 in 10 Republican voters.”

“But not a single Republican in congress voted for it, so is that missing bipartisanship what makes Biden extreme and radical?”