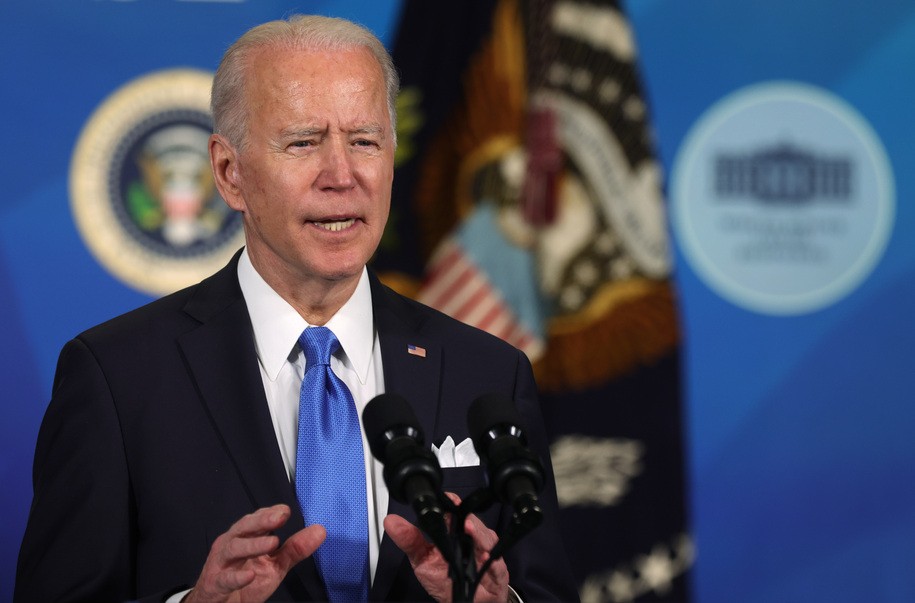 “President Joe Biden promised on Wednesday morning that any individual earning more than $400,000 a year would see some type of tax increase under his forthcoming economic plan,” Bloomberg reports.

Said Biden: “Anybody making more than $400,000 will see a small to a significant tax increase. You make less than $400,000, you won’t see one single penny in additional federal tax.”

“The Fed­eral Re­serve kept its easy-money poli­cies in place and vowed to main­tain them un­til the U.S. econ­omy re­cov­ers fur­ther from the ef­fects of the coro­n­avirus pan­demic, while also high­light-ing the bright­en­ing out­look for growth,” the Wall Street Journal reports.

Politico: “The overwhelming sentiment within the Republican Party is that voters will turn on the $1.9 trillion bill over time. But that wait-and-see approach has baffled some GOP luminaries and Trump World figures who fear the party did little to dent Biden’s major victory.”

Said former Trump strategist Steve Bannon: “The lack of response to this bill in an organized messaging and aggressive media push back is shown by the fact that Democrats have now gone from $2 trillion to a $4 trillion infrastructure package. If Covid relief was that easy, why not just run the table?”

Washington Post: “Twenty-one Republican state attorneys general on Tuesday threatened to take action against the Biden administration over its new $1.9 trillion coronavirus stimulus law, decrying it for imposing ‘unprecedented and unconstitutional’ limits on their states’ ability to lower taxes.”

“The attorneys general take issue with a $350 billion pot of money set aside under the stimulus, known as the American Rescue Plan, to help cash-strapped cities, counties and states pay for the costs of the pandemic. Congressional lawmakers opted to restrict states from tapping these federal dollars to finance local tax cuts.”

Jonathan Bernstein: “Forcing senators to give marathon orations to carry out a filibuster is a bad idea, but it looks like it may be a bad idea whose time has come, with President Joe Biden endorsing the ‘talking filibuster’ in an ABC News interview. Why? Because most Democrats want to eliminate the filibuster, and Senator Joe Manchin of West Virginia — the most moderate Democrat in the Senate — has said that while he absolutely won’t vote to eliminate the filibuster, he’s open to going the ‘talking’ route.”

“And so that’s what’s we’re going to talk about. Because what happens with Senate procedures over the next few months is going to determine whether Democrats pass a lot of their remaining agenda or very little of it.”

Playbook: “It’s almost quaint: A group of 20 Senate Democrats and Republicans will break bread today in the hopes of sparking bipartisan progress on a range of hot-button issues.”

“But the chances of the group producing anything of substance are dim — and privately they all know it. The pull for both parties is in the opposite direction. Progressives are nudging Biden and the Democratic Party further left: They have no interest in diluting their goals in a (most likely fleeting) moment of power. The right is already eyeing a takeover of Congress in the midterms on a message of Democratic overreach.”

Jonathan Chait: “We have the peculiar dynamic in which the leader of a major party is invoking his own agenda as something that cannot and should not happen.”

“Obviously, I don’t like the policies McConnell described. What I can’t understand is how McConnell is supposed to feel about them. If he truly thinks they’d ‘strengthen America,’ then shouldn’t he want to have the chance to enact them, and then have his party run on the results?

“The way many Republicans describe it, President Biden has thrown open the border between Mexico and the United States so that anyone who wants to come into the country can do so, illegally or legally,” the Washington Post reports.

“But many of those who live along the border in Texas say that while there has been a dramatic increase in the number of migrants caught crossing illegally, the border itself has been heavily restricted for nearly a year because of the coronavirus pandemic.”

New York Times: “The incomplete border wall, already one of the costliest megaprojects in United States history, with an estimated eventual price tag of more than $15 billion, is igniting tensions again as critics urge Mr. Biden to tear down parts of the wall and Republican leaders call on him to finish it.”

“The Biden administration suspended construction on the border wall on Jan. 20, the president’s first day in office, announcing a 60-day period during which officials are determining how to proceed.”

“The Biden administration is restricting the information Border Patrol agents and sector chiefs can share with the media as a surge of migrants tests the agency’s capacity at the southern border,” NBC News reports.

“Border Patrol officials have been told to deny all media requests for ‘ride-alongs’ with agents along the southern border; local press officers are instructed to send all information queries, even from local media, to the press office in Washington for approval; and those responsible for cultivating data about the number of migrants in custody have been reminded not to share the information with anyone to prevent leaks.”

“Days after Lindsey Boylan became the first woman to accuse Gov. Andrew M. Cuomo of sexual harassment in a series of Twitter posts in December, people tied to the governor started circulating an open letter that they hoped former staff members would sign,” the New York Times reports.

“The letter was a full-on attack on Ms. Boylan’s credibility, suggesting that her accusation was premeditated and politically motivated. It disclosed personnel complaints filed against her and attempted to link her to supporters of former President Donald J. Trump.”

Said Trump: “I would recommend it. And I would recommend it to a lot of people that don’t want to get it and a lot of those people voted for me, frankly. But again, we have our freedoms and we have to live by that and I agree with that also. But it is a great vaccine. It is a safe vaccine and it is something that works.”

Bloomberg: “Trump’s net worth is down to $2.3 billion from $3 billion when he became president, according to the Bloomberg Billionaires Index. The pandemic he promised would disappear is walloping his company, and the riot that got him impeached for a second time is wounding his brand.”

“Democratic lawmakers and allies favoring a public option to compete with private insurers want the party to seize on its narrow congressional majorities to muscle through an idea that’s long been popular with the base,” Politico reports.

“They’re betting that after years of rising health costs and the GOP’s failed attempts to throw out Obamacare, voters in the tightly contested 2022 midterms would reward Democrats for tackling health care costs.”

Rick Hasen writes that HR 1–the major Democratic voting rights and elections bill that already passed the House–likely wouldn’t pass in the Senate even if there were no filibuster.

“This mammoth bill has little chance of being enacted. But a more pinpointed law, including one restoring a key part of the Voting Rights Act, could make it out of the Senate to guarantee voting rights protections for all in the 2022 and 2024 elections.”

His four main tenets in such a “pinpointed” bill are:

“A leading Republican hard-liner clashed behind closed doors with House GOP Leader Kevin McCarthy on Wednesday, exposing a rift in the Republican conference and suggesting that a chamber-rattling floor protest by the far right isn’t fading anytime soon,” Politico reports.

“During a closed-door conference meeting, House Freedom Caucus Chair Andy Biggs (R-AZ) went after McCarthy for not being more supportive of a conservative-led effort to force a series of lengthy — and largely fruitless — procedural votes that have snarled the floor.”

Rep. Louie Gohmert (R-TX) is circulating a competing bill to award congressional gold medals to the Capitol Police which scrubs all mentions of the January 6 Capitol attack.

Playbook: “It’s just the latest effort by some of Trump’s most hardcore backers to rewrite history.”

Jake Sherman reports that the House Republican Conference has voted to reverse its internal ban on requesting earmarks.

Russia’s ambassador to Washington has been recalled to Moscow for “consultations” to determine how to move forward with relations with the U.S., the Russian foreign ministry said in a statement Wednesday, Axios reports.

“The IRS is planning to push back the filing deadline for taxes to May 15,” the Washington Post reports.

“The delayed filing deadline comes as the IRS is dealing with a massive backlog that has left it unable to fully process roughly 24 million tax filings from individuals and businesses since the 2019 tax year.”

Said DeSantis: “It doesn’t make any sense. If Florida were to send the money back, Treasury Secretary Janet Yellen is going to send it to Illinois, California, New York or New Jersey. I don’t think that would make sense for Floridians — for us to be giving even more money to the blue states that are already getting such a big windfall in this bill.”

CNN: A year into the pandemic, Florida is booming and DeSantis is taking credit.

“It would make it harder for dominant companies to win regulators’ approval of mergers and stretch the government’s authority over competition in other ways. Klobuchar, who heads the Senate Judiciary subcommittee on competition policy, has launched a broad examination by the panel of monopoly concerns.”

Said Klobuchar: “At stake is nothing less than the future of our economy and the way of life that it supports. This is about saving capitalism and building an economy that works for all Americans.”

“While many Texans last week were worried about sky-high electric bills from February’s winter storms, the state’s sole utility commissioner was privately reassuring out-of-state investors who profited from the crisis that he was working to keep their windfall safe,” the Texas Monthly reports.

The news came in a recording of a 48-minute call in which Texas Public Utility Commission chairman Arthur D’Andrea discussed the fallout from the February power crisis with investors.

The Houston Chronicle reports D’Andrea resigned last night after the audio was released.