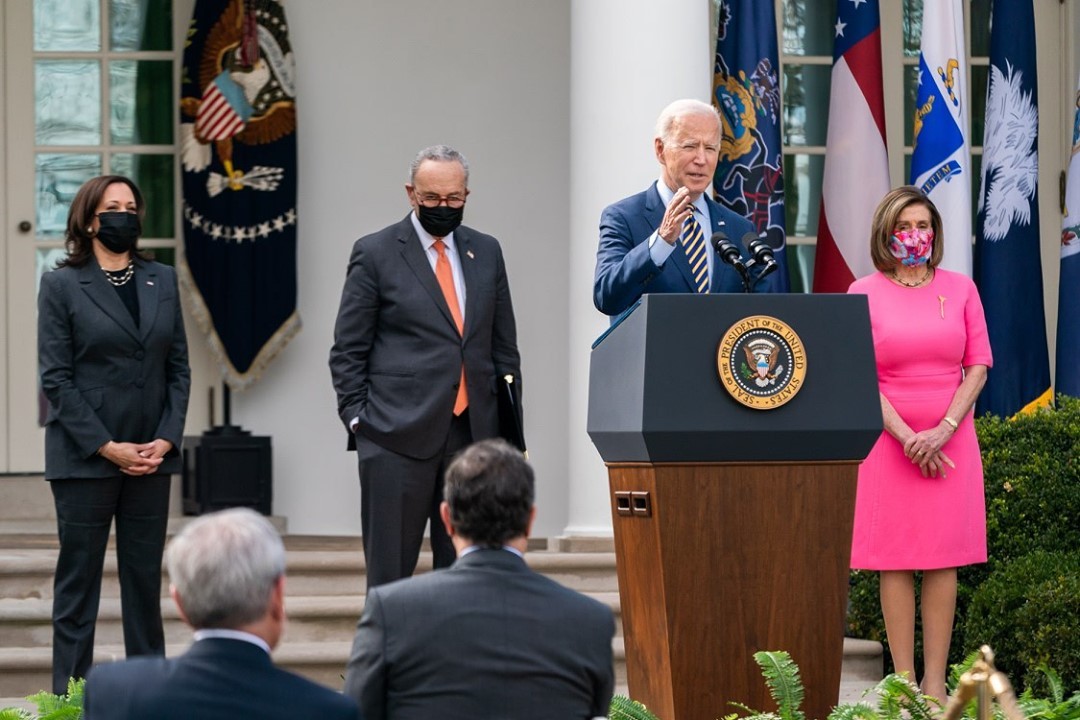 “President Joe Biden will join his administration’s tour of swing states to promote the $1.9 trillion Covid-19 relief package Tuesday with a stop in the Philadelphia suburbs,” NBC News reports.

“Biden will visit a small business in Chester, Pennsylvania, in the mid-afternoon, where he plans to talk to people about the benefits of the American Rescue Plan, which was signed into law last week.”

“All the muscles of the Democratic Party are engaged in selling President Biden’s COVID-19 relief bill just days after it was signed, with Democrats treating the $1.9 trillion package like a candidate,” Axios reports.

“The efforts underscore how closely Biden himself — and the broader Democratic machine — have tied the popularity of his first major piece of legislation to the success and ultimate survival of his presidency.”

Washington Post: “The sales pitch — including a visit by Biden on Tuesday to Chester, Pa. — will feature a host of top administration and Cabinet officials and is expected to encompass Republican-leaning states, too. Biden could visit Ohio, for instance, as early as next week.”

“Democrats say the overlap between the competitive 2022 Senate races and traditional battleground states helps the White House achieve its dual goals of working to hold the Senate and thanking voters who supported Biden.”

Said McConnell: “Let me say this very clearly for all 99 of my colleagues: Nobody serving in this chamber can even begin, can even begin, to imagine what a completely scorched-Earth Senate would look like.”

“McConnell knows the ins and outs of Senate rules better than anyone. In an institution that operates by unanimous consent for everything — from turning on the lights, to allowing senators to give floor speeches or speed through the customary reading of lengthy legislative text — McConnell can slow down everything with one simple demand: Require quorums for everything. And he signaled he will.”

“He has already done that. He’s proven he can do it, and he will do it again.”

— Sen. Dick Durbin, to HuffPost on Sen. Mitch McConnell’s threat to jam up the Senate.

President Joe Biden told ABC News that “he supports changing the Senate’s filibuster rule back to requiring senators talk on the floor to hold up a bill, the first time he has endorsed reforming the procedure the White House has for weeks insisted the president is opposed to eliminating.”

“I’m not going to say that you must get rid of the filibuster entirely. I would say you would do well to develop a Manchin-Sinema rule on getting around the filibuster as it relates to race and civil rights.”

“A bipartisan group of senators who successfully pushed for a second coronavirus aid bill last year will meet on Wednesday as they weigh whether to wade into another thorny topic, such as immigration or the minimum wage,” Politico reports.

“The group of 20, evenly split between Republicans and Democrats, was formed to push Congress to pass a $900 billion pandemic stimulus bill late last year. Its meeting this week comes as the House prepares to pass immigration bills that will further reinforce the Senate’s gridlock on that issue without some bipartisan framework to break the impasse.”

House Minority Leader Kevin McCarthy (R-CA) claimed that he’d spoken to border agents in El Paso who told him that suspected terrorists have attempted to cross the border into the United States—but he provided no evidence to back it up, the Washington Post reports.

Sen. Sheldon Whitehouse (D-RI) is calling on the newly-confirmed attorney general, Merrick Garland, to help facilitate “proper oversight” by the Senate into questions about how thoroughly the FBI investigated Brett Kavanaugh during his confirmation hearing, The Guardian reports.

“Among the concerns listed in Whitehouse’s letter to Garland are allegations that some witnesses who wanted to share their accounts with the FBI could not find anyone at the bureau who would accept their testimony and that it had not assigned any individual to accept or gather evidence.”

A woman who has accused New York Gov. Andrew Cuomo (D) of sexual harassment told investigators Monday that he was preoccupied with talking to subordinates about his “hand size” and “what the large size of his hands indicated,” CNBC reports.

Charlotte Bennett also provided the investigators with more than 120 pages of contemporaneous records, as well as other examples of documentary evidence, to corroborate her accusations against Cuomo and his senior staff.

President Biden told ABC News that New York Gov. Andrew Cuomo should resign if an investigation confirms the allegations of inappropriate behavior made against him by multiple women.

Biden also said that he also thought Cuomo will “probably end up being prosecuted” if the investigation confirms the claims.

Politico: “Biden still plans to dole out ambassadorships to major campaign donors, but some diplomats say slashing the number of fundraisers sent to overseas posts would restore confidence in the federal government, boost State Department morale and send a message around the globe.”

“Most presidents in recent decades have given 30 percent of ambassadorships to political appointees, including major campaign donors. But Trump increased that number to roughly 44 percent, which included posts in some countries that usually went to career diplomats, such Thailand and Kenya.”

“The Office of the Director of National Intelligence released its declassified report on foreign threats to 2020 US elections Tuesday, which concludes that foreign adversaries — including Russia — did attempt to interfere.”

Sen. Joe Manchin (D-WV) said that “he will likely support Vanita Gupta as the No. 3 at the Justice Department, taking a stance that is expected to pave the way for her confirmation in the face of stiff GOP opposition,” CNN reports.

“Republicans have by and large attacked her past views and tweets and have characterized her as out of the mainstream, a sign that most — if not all — of them are likely to vote against her nomination as associate attorney general in the evenly divided chamber.”

Forbes reports that President Biden has nominated three new members to the USPS Board of Governors, which theoretically could give the board a majority of votes to remove current Postmaster General Louis DeJoy.

Said Collins: “I would not anticipate that it would be well received.”

“The Army initially pushed to reject the D.C. government’s request for a modest National Guard presence ahead of the Jan. 6 rally that led to the Capitol riot, underscoring the deep reluctance of some higher-ups at the Pentagon to involve the military in security arrangements that day,” the Washington Post reports.

Insider: “12 Republicans and 10 Democrats tell Insider they’re waiting their turn, abiding by the vaccination distribution guidelines they’ve helped set or waiting for the vaccine supplies in their state to increase.”

“One senior level staffer for a Democratic governor told Insider she’s worried about her boss, who hasn’t been vaccinated because he won’t jump the line… Health officials contacted by Insider said it’s certainly fair for governors to receive the COVID-19 vaccine to help encourage others to do so.”

Staffers working for Trump officials who publicly flouted coronavirus health safety guidelines secretly scrambled to get a COVID-19 vaccine at the beginning of the U.S. rollout, Vanity Fair reports.

Ex-officials told Insider the effort was like first-class passengers on the Titanic rushing to the lifeboats.

The Guardian: “A third wave of the Covid pandemic is now advancing swiftly across much of Europe. As a result, many nations – bogged down by sluggish vaccination campaigns – are witnessing sharp rises in infection rates and numbers of cases.”

“The infection rate in the EU is now at its highest level since the beginning of February, with the spread of new variants of the Covid-19 virus being blamed for much of the recent increase.”

“Several countries are now set to impose strict new lockdown measures in the next few days – in contrast to the UK, which is beginning to emerge slowly from its current bout of shop and school closures and sports bans.”

Associated Press: “The European Union said Monday it is starting legal action against the United Kingdom, arguing it does not respect the conditions of the Brexit withdrawal agreement and is violating international law.”

“The 27-nation EU is objecting to Britain unilaterally extending a grace period beyond Apr. 1 that applies to trade on the island of Ireland, where the EU and the United Kingdom share a land border and where a special trade system was set up as part of the Brexit divorce deal.”