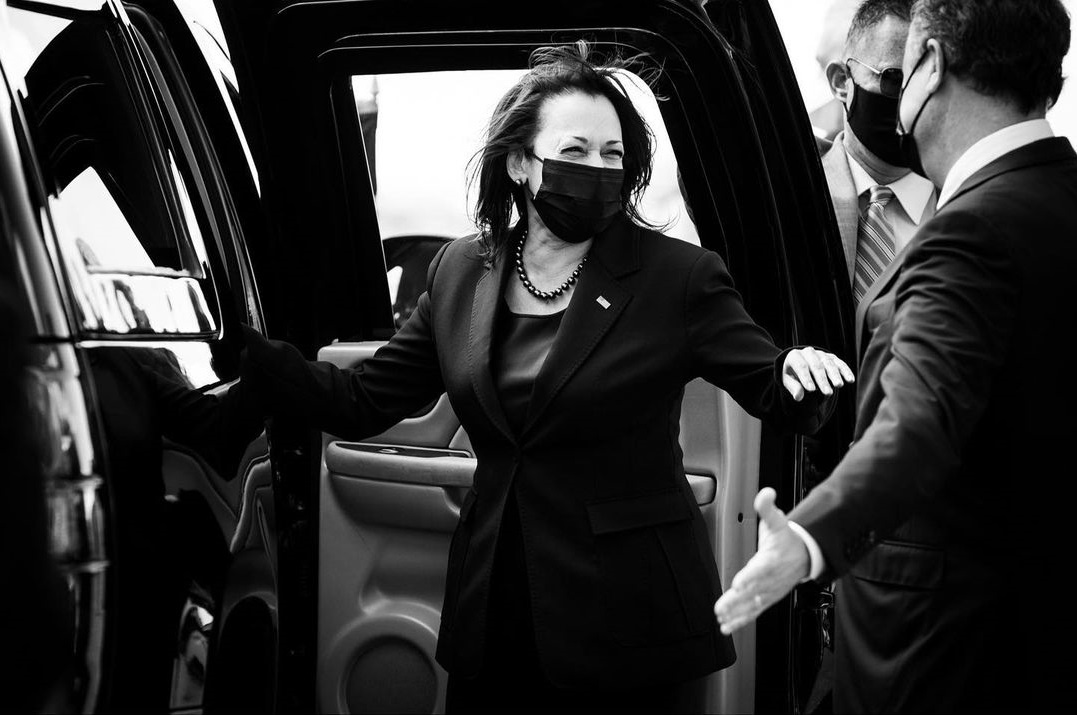 First Read: “President Biden and the Democrats have bet big on the coronavirus and the economy, ramping up vaccine distribution, passing the Covid relief law, and getting $1,400 checks in the hands of most Americans.”

“Republicans, meanwhile, are no longer even trying to message on the coronavirus and the Covid relief law – and they’re instead focused on immigration and the influx of migrants at the border.”

“These different messages have exposed political vulnerabilities for the other side.”

“Republicans have taken their eye off a pandemic that’s killed more than 500,000 Americans, and when it comes to the economy, they’re arguing that a boom was coming even before Biden’s stimulus.”

Californian Gov. Gavin Newsom (D) and his allies released an online ad tying the recall effort of the governor to Donald Trump, QAnon and the national Republican party.

A new Bendixen & Amandi poll of Cuban-American voters in Florida shows that an overwhelming majority — 66% — is solidly opposed to the Biden administration reengaging with the island dictatorship — and their brief drift toward Democrats has been totally reversed.

ALASKA U.S. SENATOR — The Alaska Republican Party has voted to censure Sen. Lisa Murkowski (R-AK) and will recruit a challenger to run against her in next year’s election, the Anchorage Daily News reports.

Republican Sen. Lisa Murkowski unequivocally said back in January that she was running for re-election, but she’s sounding a lot less certain now. When reporters recently asked her when she would decide, the 18-year incumbent noncommittally responded, “Well, I have to do it before 2022, right?” If Murkowski does choose to retire, it would mark the first time that an incumbent senator has not sought re-election in Alaska since it became a state in 1959.

Politico: “Over the past few weeks, Politico has received a number of robocalls from generically named political groups asking for cash in order to help in very Trump-specific missions. A donation of $100, for example, would help return Trump to Twitter. Or, for a similar amount, a potential donor can ‘stop Kamala Harris and socialism,’ the calls claim.”

“But the calls aren’t being made by Trump’s Save America political action committee. In fact, it’s not entirely clear who’s behind them. … One telemarketer said he was calling from the 33rd floor of a Dallas office building — a building which is home to a WeWork office that’s been linked to a man named Matthew Tunstall. Tunstall is the treasurer of the Support American Leaders PAC … A Politico investigation in 2019 identified Support American Leaders PAC as one of more than a dozen pro-Trump PACs with no actual ties to Trump.”

NORTH CAROLINA — Gary Pearce writes on North Carolina’s political transformation since 2008 and why its political future is so difficult to predict:

“Democrats here have been inspired by Democrats in Georgia, which went for President Biden and elected two Democratic senators. Efforts have begun to replicate Georgia Democrats’ voter registration and turnout juggernaut.”

“But North Carolina isn’t Georgia. We’re more rural. While both states have over 10 million people, Georgia’s rural population is about 1.8 million; North Carolina’s is over 3 million. Georgia has more Black voters — 30% of the total electorate, compared to North Carolina’s 20%.”

GEORGIA U.S. SENATOR — Lt. Gov Geoff Duncan said over the weekend that he would not seek the Republican nomination to face Democratic Sen. Raphael Warnock.

Donald Trump favorite and former NFL running back Herschel Walker “appears interested” in running and has been “making calls into the state.” That preposition is the key word there, though: While Walker was raised in the Peach State and was a star on the University of Georgia’s football team, he’s resided in Texas for many years.

Trump’s fulsome support for Walker—he not-tweeted “Run Herschel, run!” in a Wednesday press release—is also causing another issue. One unnamed Republican operative says that other candidates are avoiding the race “because they heard about the Trump-Herschel combo,” and Trump’s obsession with Walker played a role in former Sen. David Perdue’s decision not to wage a comeback bid.

A Walker candidacy still remains highly speculative, however, particularly since the one thing no one has managed to acquire so far is any sort of statement about his interest directly from him.

NEW YORK GOVERNOR — With Cuomo’s political future in grave peril, more of his fellow Democrats are hinting that they might run for governor themselves, though it’s not clear whether anyone actually wants to challenge Cuomo in a primary—he has yet to abandon his re-election bid—or if folks are just hoping for an open-seat race. Either way, CNBC reports that state Comptroller Tom DiNapoli and Rep. Tom Suozzi have both been discussing bids with supporters and, through spokespeople, have not denied doing so. DiNapoli has unambiguously said that Cuomo should step down, while Suozzi stopped just short, saying Cuomo should resign “[i]f he cannot effectively govern.”

On the GOP side, former Westchester County Executive Rob Astorino said in a new interview that he’s thinking about a second bid for governor, though he added that it “likely would be several months” until he announces a decision. Astorino was the Republican nominee against Cuomo in 2014 and lost 54-40. He also tried to unseat Democratic state Sen. Pete Harckham last year but fell short by a 52-48 margin.

ARIZONA 2ND CD — Democratic Rep. Ann Kirkpatrick announced Friday that she would not seek re-election in Arizona’s 2nd Congressional District, a once swingy Tucson-area seat that has trended hard to the left over the last few years but could look quite different next year.

The 2nd District, which includes about 60% of Tucson’s Pima County and all of conservative Cochise County to the east, backed Mitt Romney 50-48 in 2012 and hosted incredibly tight House races that year and in 2014. Things started to change in 2016, however, when Hillary Clinton carried the seat 50-44, but Republican Rep. Martha McSally, who had narrowly prevailed two years before, was nonetheless decisively re-elected that year. Kirkpatrick, though, convincingly flipped the 2nd in 2018 when McSally left to run for the Senate, and she had little trouble holding it in 2020 as Joe Biden was romping to a 55-44 victory here.

But while the district’s future shape is unknown, it didn’t take long for Politico to put together a list of potential Kirkpatrick successors. On the Democratic side, an unnamed source says that state Rep. Randy Friese is “likely” to run. Friese was a trauma surgeon who operated on then-Rep. Gabby Giffords and others after a gunman sought to assassinate the congresswoman in 2011. Friese got into politics soon after and narrowly unseated a GOP incumbent to win a Tucson-area state House seat in 2014, convincingly winning re-election ever since. Pima County Supervisor Matt Heinz, who has unsuccessfully run here in the past, and state Reps. Andrés Cano and Daniel Hernández are also mentioned as possibilities.

For the Republicans, state Sen. T.J. Shope “has been in contact with House Republicans about a 2022 bid.” Shope’s 8th Legislative District, as she notes, doesn’t overlap at all with the 2nd Congressional District, though that could change under the new map. Corporation Commissioner Lea Márquez Peterson, who was the GOP’s 2018 nominee here and lost 55-45 to Kirkpatrick, is another GOP possibility.

TEXAS 6TH CD — Republican Brian Harrison, a former Trump HHS official, is the first candidate to go on the airwaves in the May special election for Texas’ 6th Congressional District. The spot is devoted to scurrilous lies about Planned Parenthood. There’s no word on the size of the buy.

NEW MEXICO 1ST CD — The U.S. Senate confirmed Democratic Rep. Deb Haaland as secretary of the interior on Monday, making Haaland, who is a member of the federally recognized Laguna Pueblo tribe, the first Native American to ever run a cabinet-level department. The congresswoman’s departure from the House will also set off a special election in New Mexico’s 1st District in the Albuquerque area, which supported Joe Biden 60-37 last year.

In anticipation of a vacancy, several candidates from both parties have been running here for some time, but there won’t be any primaries. Instead, state law requires each party’s central committee to pick their candidate: The Democrats’ body is made up of about 180 members, while Republicans put their own membership at 119. Lawmakers introduced a bill this year to institute traditional primaries instead, but it looks unlikely to win the support of the necessary two-thirds of each chamber before the legislature’s session ends on Saturday.

We’ll have a look at both parties’ fields in a future Digest, but there was one notable development on the GOP side shortly before Haaland was confirmed when state Sen. Mark Moores announced he would run. Political observer Joe Monahan writes that while Moores, who is the only Republican in the chamber who represents any part of the city of Albuquerque, would have a tough time flipping this seat, even an unsuccessful House campaign could help raise his profile for a bid against Democratic Gov. Michelle Lujan Grisham next year.