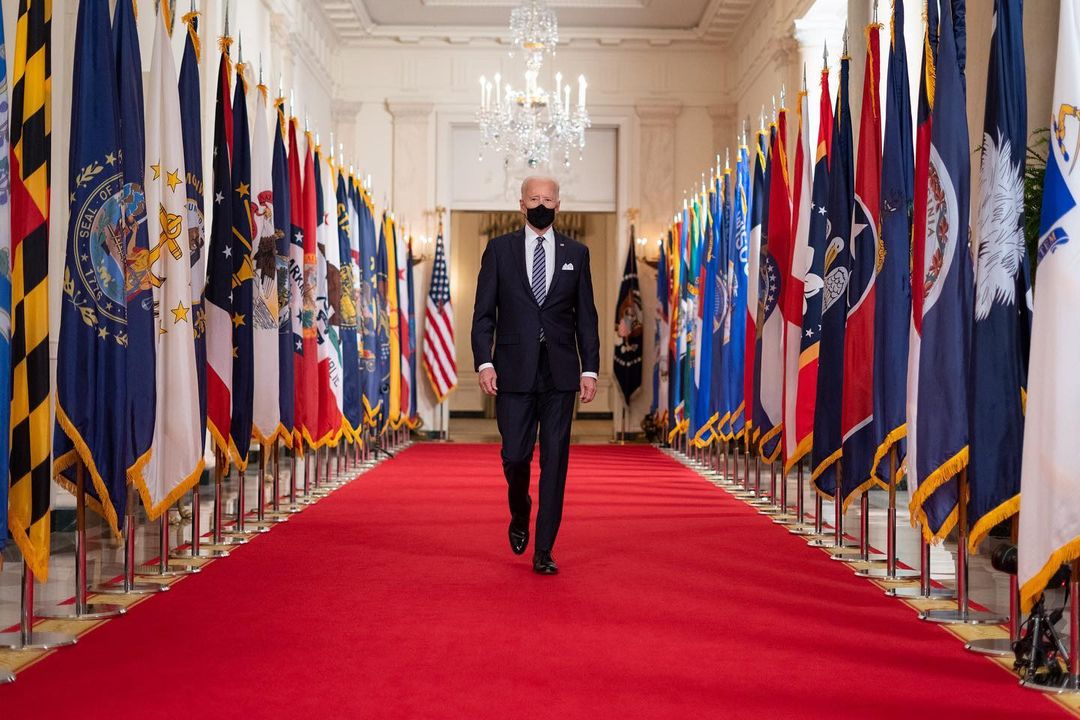 Following passage of President Joe Biden’s relief plan, Speaker Nancy Pelosi issued a statement where she “called upon the Chairs of the Committees of Jurisdiction to work with their Republican counterparts to craft a big, bold, transformational infrastructure package.”

Wall Street Journal: “Congress is considering the most significant changes to antitrust law in decades, including some proposals with bipartisan support. Lawmakers are looking at setting a higher bar for acquisitions by companies that dominate their markets; making it easier for the government to challenge anticompetitive conduct; and potentially forcing some giant tech companies to separate different lines of their businesses.”

“For these measures to become law, lawmakers will have to move beyond their general unease with dominant companies — particularly in the tech sector — and navigate constituencies that don’t agree on whether antitrust law needs a major overhaul or targeted changes.”

Karl W. Smith: “The American Rescue Plan, which President Joe Biden signed into law, contains a provision that represents a qualitative break from the welfare-to-work policies that have been in place since the 1990s. The change is also scrambling party politics — especially on the Republican side — in a way that could have lasting implications.”

New York Times: “Be it his self-regard, his disdain for fellow Democrats or his imperious demeanor, Mr. Cuomo alienated allies and enemies alike on his way up in politics, and now finds himself sliding from hero-level worship to pariah-like status with the kind of astonishing speed that only the friendless suffer. It is a downfall foretold in a decade-long reign of ruthlessness and governance by brute force.”

“For Mr. Cuomo, politics has always been a zero-sum game: For him to win, someone else must lose, whether it is the legislator whose idea he is taking credit for, or Mayor Bill de Blasio, whose initiatives he routinely stomped.”

Mike Allen: “An occasional adviser who has known Andrew Cuomo for nearly 40 years tells me that the New York governor — after a career of playing hardball, including over-the-line threats — has ‘no net of good will’ to catch him.”

Neil Irwin sees 17 reasons why things are lining up for roaring economic growth in the United States.

“The number of Americans seeking unemployment benefits fell last week to 712,000, the lowest total since early November, evidence that fewer employers are cutting jobs amid a decline in confirmed coronavirus cases and signs of an improving economy,” the AP reports.

“The Biden administration is mobilizing the Federal Emergency Management Agency to help care for the overwhelming number of unaccompanied migrant teens and children filling detention cells and tent shelters along the Mexico border, the Department of Homeland Security said Saturday evening,” the Washington Post reports.

“The FEMA deployment will support what DHS called a 90-day government-wide effort at the border, where the Biden administration is struggling to care for a record number of teenagers and children arriving without their parents. The minors are arriving at a rate that far exceeds authorities’ ability to house them.”

Tim Miller: “A popular leader massively botches a crisis and covers up his mistakes. He is credibly accused by multiple women of inappropriate behavior. And yet the voters stick with him.”

“Sound familiar? Well here is where the story changes a bit.”

“The party leaders rebuff their voters. They declare that no matter the level of popular support, someone who has committed such unacceptable acts has lost the ability to govern and should be removed from office.”

John Harris: “Why are so many people in the business of being likable actually so unlikable? Not unlikable merely in the awkward, eye-rolling, prefer-not-to-spend-much-time-with-that-clod sense. Unlikable in the toxic, misanthropic, something-must-be-wrong-with-him sense. In other words: in the Andrew Cuomo sense. Or at least, it is now clear, the way many subordinates and fellow politicians experienced Cuomo on many occasions.”

“One element is probably ageless. Professions that demand public performance attract ambitious, creative, and often needy people who feel under intense psychic pressure and often take it out on people when the spotlight is not on (or they wrongly assume it is not on.) There are even examples, or so I’ve heard, of this phenomenon afflicting people in the news media. But an important factor is distinctly a product of this age: The cult of bad-ass, trash-talking that has come to politics, including or especially to political-media relations.”

Washington Post: “The Defense Department’s internal watchdog has concluded a long-delayed investigation into Michael Flynn, defense officials said Friday, sending its findings to the Army in a case that could bring tens of thousands of dollars in financial penalties for President Donald Trump’s first national security adviser.

“The investigation focuses on Flynn’s acceptance of money from Russian and Turkish interests before joining the Trump administration, a potential violation of the Constitution’s emoluments clause.”

Sen. Ron Johnson (R-WI) said the Trump supporters who stormed the U.S. Capitol in January didn’t worry him but that he might have been concerned if they had been supporters of Black Lives Matter, the Milwaukee Journal Sentinel reports.

Said Johnson: “I knew those were people who love this country, that truly respect law enforcement, would never do anything to break the law, so I wasn’t concerned.”

Rep. Glenn Grothman (R-WI), arguing against an expansion of the earned income tax credit in the relief bill, via CBS Milwaukee: “I know the strength that Black Lives Matter had in this last election. I know it’s a group that doesn’t like the old-fashioned family. Disturbed that we have another program here in which we’re increasing the marriage penalty.”

That brought an angry reaction from Delegate Stacey Plaskett (D-VI): “We have been able to keep our families alive for over 400 years. How dare you say that we are not interested in families in the Black community? That is outrageous. That should be stricken down.”

Rep. Pramila Jayapal (D-WA) called for ethics investigations into Reps. Lauren Boebert (R-CO), Paul Gosar (R-AZ) and Mo Brooks (R-AL) over what she described as their involvement in “instigating and aiding” the Jan. 6 riot at the Capitol, The Hill reports.

A new Johns Hopkins study found that states with Democratic governors had the highest incidence and death rates from Covid-19 in the first months of the coronavirus pandemic, but states with Republican governors surpassed those rates as the crisis dragged on, NBC News reports.

“The researchers theorized that one reason for the change is that Democrats were in charge of states where people who had the virus first arrived in the country — but Republicans were less stringent about safeguards, which could have contributed to their states’ ultimately higher incidence and death rates.”

CNN: “Members of Congress have sought clarity from US Capitol Police and the Pentagon as to why the deployment of Guard troops was extended this week through May but have not been given a clear explanation, according to a source familiar with the outreach.”

“The current understanding, the source told CNN, is that US Capitol Police does not have the staffing to provide security post-January 6 even with a reduced threat, so the National Guard is bridging the gap. … The long-term security posture at the Capitol itself is the first of a host of politically thorny issues lawmakers will have to tackle, and if their current sentiment is any indication, it will not be an easy debate.”

Politico: “The two-hour meeting of the Judiciary Subcommittee on the Constitution, Civil Rights and Civil Liberties — billed as an academic review of lawmakers’ ability to punish or expel one another under House rules — quickly devolved into a tidal wave of outrage, a snapshot of the increasingly toxic environment that has enveloped Capitol Hill since a mob of pro-Donald Trump supporters stormed the Capitol and sent them fleeing for their lives.”

“Democrats continue to seethe over their GOP colleagues who countenanced Trump’s efforts to discredit the election, and blame them for contributing to the atmosphere that inspired the mob. Republicans have largely sidestepped that debate, but as Democrats have begun ramping up tactics to marginalize the 138 House Republicans who voted to reject some of the 2020 results, some are beginning to bristle more vocally. And at Thursday’s hearing, the dam broke.”

“Joe Biden has shown little appetite for Elizabeth Warren’s trademark campaign proposal, a wealth tax, but she’s won something else from the president, as nearly a dozen of her allies and former aides have joined his administration,” Bloomberg reports.

“The Massachusetts senator’s associates hold top posts at the White House and at federal agencies handling issues ranging from financial regulation to national security and climate change. The hires have helped assuage progressives concerned Biden isn’t sympathetic to their views, but have set off alarms in the banking and financial sector.”

Washington Post: “The seven-week stretch is the longest a new president has gone without meeting the press in the past 100 years, dating back to when Calvin Coolidge, a man known as ‘Silent Cal,’ was president.”

“He has often taken a question or two from reporters at the end of speeches or statements, as he did Wednesday after remarks about an increase in the coronavirus vaccine supply. But his record as president so far mirrors his behavior as a candidate, when Biden gave several interviews but rarely interacted with a roomful of reporters.”

David Ignatius: “President Donald Trump was so eager to pull the plug in Afghanistan that in mid-November, shortly after the election, he impulsively signed an order to withdraw U.S. forces by year’s end. Pentagon officials tell me the unpublicized order was quickly reversed, after strenuous protests from Gen. Mark Milley, chairman of the Joint Chiefs of Staff, and other military leaders.”