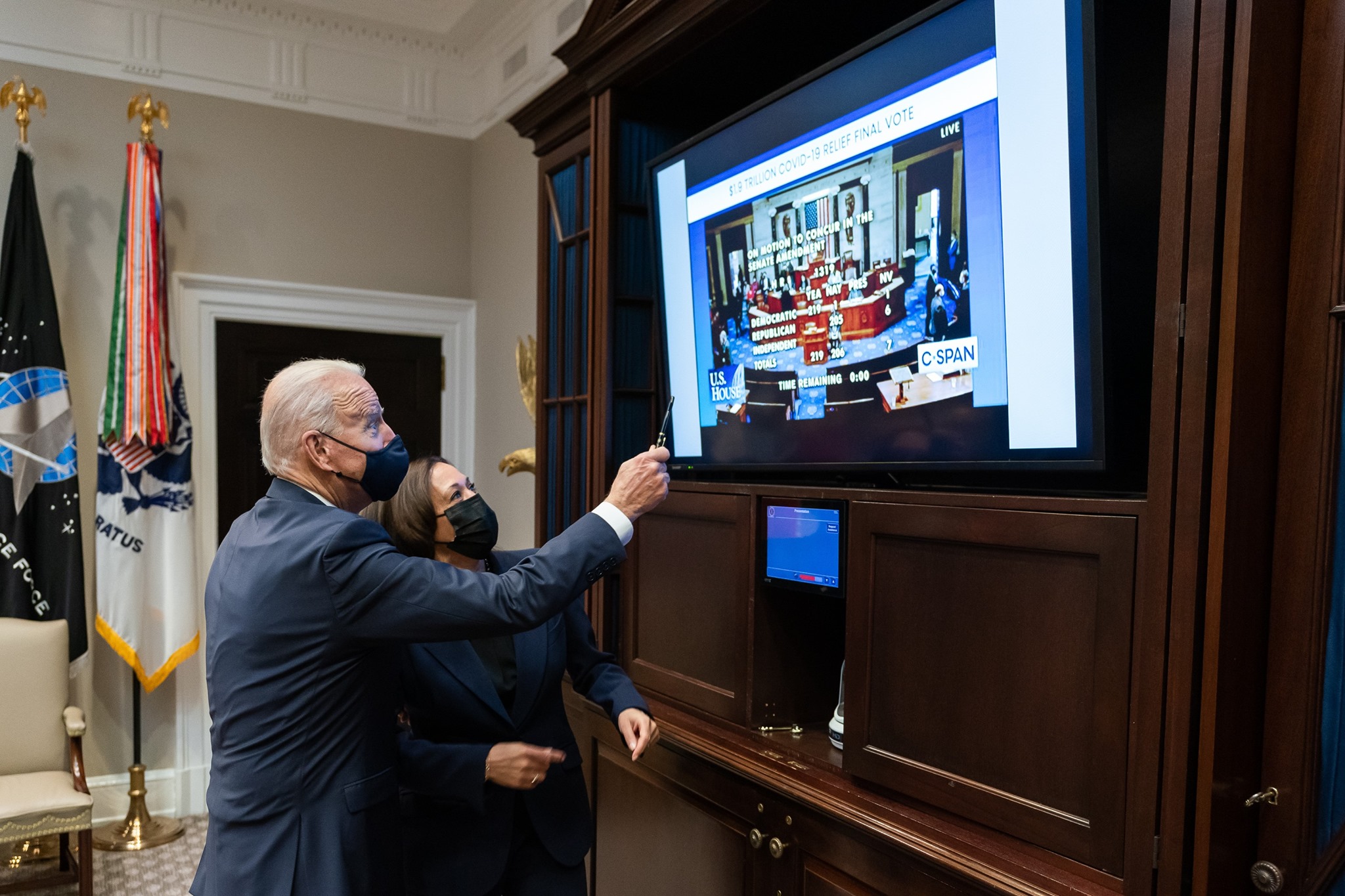 “The Democratic National Committee, in cooperation with the Biden White House, will kick off a sweeping effort to sell the newly signed Covid-19 relief package to a politically divided American people on Friday, releasing a new national ad bragging about the bill along with a detailed guide on how Democrats across the country should tout the legislation,” CNN reports.

“The multi-prong effort is aimed at turning the bill into something Democrats can run on, not run away from, in the coming years, including in the politically critical 2022 midterms.”

Rep. Ann Kirkpatrick (D-AZ) “is expected to announce Friday that she will not seek another term representing the Tucson area, a move that comes as the state’s political boundaries will be redrawn ahead of the 2022 elections,” the Arizona Republic reports.

NEW YORK GOVERNOR / NEW YORK 19TH CD — Dutchess County Executive Marc Molinaro said this week that he was mulling over a bid for Congress in addition to a second campaign for governor. House Republicans, though, may not be content to wait for him to make up his mind after the debacle they experienced last year when they tried to recruit him to take on Democratic Rep. Antonio Delgado.

Molinaro was the 2018 Republican nominee against Democratic Gov. Andrew Cuomo, a race he lost by a brutal 60-36 margin statewide. Molinaro, though, did carry the Hudson Valley-based 19th District by a wide 53-42 even as Delgado was unseating Republican Rep. John Faso, which made the county executive an attractive prospect for the NRCC.

The committee hoped that Molinaro would launch a House campaign after he was re-elected in November of 2019 as leader of Dutchess County, but it didn’t have a viable backup candidate when he announced two months later that he would stay put. The nominee the GOP ended up with, Kyle Van De Water, raised very little money, and major outside groups on both sides ended up focusing their efforts elsewhere instead. Delgado ultimately won by a solid 54-43 as Joe Biden was carrying his seat by a much smaller 50-48 spread.

NEW JERSEY 2ND CD — Civil rights lawyer Tim Alexander announced this week that he would seek the Democratic nomination to take on Republican Rep. Jeff Van Drew, though Alexander set up an account with the FEC back in January. Donald Trump carried this South Jersey seat by a small 51-48 margin last year, but the party-switching congressman won his first campaign as a Republican by a wider 52-46.

PENNSYLVANIA SUPREME COURT — The day before Tuesday’s filing deadline, Superior Court Judge Carolyn Nichols announced she was suspending her campaign for an open seat on the Pennsylvania Supreme Court. That leaves fellow Superior Court Judge Maria McLaughlin, who earned the endorsement of the state Democratic Party last month, as the only candidate seeking the party’s nomination. Republicans, meanwhile, will have a three-way primary on May 18 featuring two judges on the Commonwealth Court, Kevin Brobson (the state GOP’s official choice) and Patty McCullough, as well as Philadelphia Court of Common Pleas Judge Paula Patrick.

Democrats currently hold a 5-2 majority on the Supreme Court but could expand it in November as Republican Chief Justice Thomas Saylor, who will reach the mandatory retirement age of 75 this year, is leaving the bench.

ALABAMA U.S. SENATOR — Former Ambassador to Slovenia Lynda Blanchard has launched a $100,000 opening TV buy for next year’s Republican primary. The ad opens by arguing that “transgender athletes who participate in girls’ sports” are part of the “madness” in Biden-era D.C. It then moves on from that transphobic message to predictable Trump-era themes as Blanchard plays up her ties to Donald Trump and her conservative values.

MISSOURI U.S. SENATOR — Unnamed sources close to former Democratic Gov. Jay Nixon tell the Missouri Independent’s Jason Hancock that Nixon is giving some “serious thought” to the idea of a bid for this open Senate seat, though they still think it’s “highly unlikely he’ll give up life in the private sector.” Nixon left office in early 2017 after two terms as governor and now works as an attorney.

On the Republican side, the conservative Missouri Times writes that unnamed sources close to Attorney General Eric Schmitt expect him to enter the race “in the coming days.” Numerous other politicians could end up running for Team Red, and St. Louis Public Radio’s Jason Rosenbaum name-drops state Sen. Bob Onder as a possibility. Gov. Mike Parson, meanwhile, said Thursday that he will not be running, which didn’t seem to surprise anyone.

Rep. Blaine Luetkemeyer’s spokesperson confirmed that he was considering seeking a promotion. Democratic Rep. Emanuel Cleaver is also a possibility, though he hasn’t shown any obvious interest in a statewide campaign so far.

OH-Sen: A day after longtime talking head Geraldo Rivera, a Republican who mulled a 2013 Senate run in New Jersey, tweeted from Siesta Key, Florida that he was considering a 2022 Senate run in Ohio, Rivera followed up by saying he’d “decided not to seek public office.” No vaults were harmed in the making of this un-campaign.

PENNSYLVANIA GOVERNOR — Republican state Rep. Jason Ortitay tells the Pennsylvania Capital-Star that he is considering a bid for governor either next year or “sometime in the future.” Ortitay, who runs a delicious-sounding enterprise called Jason’s Cheesecake Company, sought the party’s nomination for the 2018 special election to succeed disgraced Rep. Tim Murphy in the old 18th Congressional District. Regrettably for Ortitay and Republicans who wanted to keep that seat red, however, delegates opted for fellow state Rep. Rick Saccone instead.

NORTH CAROLINA 11TH CD — Local Democrats have speculated that pastor Eric Gash, who previously played football for the University of North Carolina, could enter the race against Republican Rep. Madison Cawthorn. Gash himself, however, doesn’t appear to have said anything yet about his interest in competing in this red district in western North Carolina. Another Democrat, state Rep. Brian Turner, didn’t rule out a campaign of his own in an interview with the paper, though Perrotti says that he sounds unlikely to go for it.

On the Republican side, 2020 candidate Lynda Bennett didn’t quite close the door on a rematch against Cawthorn, who defeated her in the GOP runoff in a giant 66-34 upset last year. Bennett instead told the Mountaineer, “As of now, I’m not planning on running.” Western Carolina University political science professor Chris Cooper also relays that there are “rumors” that state Sen. Chuck Edwards “is interested in the seat.” There’s no other information about Edwards’ possible interest, though he’s been very willing to criticize the congressman in the past.

Edwards notably put out a statement days after the Jan. 6 attack on the Capitol taking Cawthorn to task for trying to delegitimize the 2020 election, declaring, “Congressman Cawthorn’s inflammatory approach of encouraging people to ‘lightly threaten’ legislators not only fails to solve the core problem of a lack of confidence in the integrity of our elections system. It exacerbates the divisions in our country and has the potential to needlessly place well-meaning citizens, law enforcement officers, and elected officials in harm’s way.”

WYOMING AT LARGE CD — On Thursday, a committee in the Wyoming state Senate advanced a bill that would require a runoff in any party primaries where no candidate won a majority of the vote—but not until 2023. The legislation was championed by Donald Trump Jr., who has argued that it would make it easier to defeat Rep. Liz Cheney in next year’s Republican primary, but those supportive tweets came before the measure was amended to only take effect next cycle.

Doug Randall of WGAB writes that this important change came Thursday following testimony from members of the Wyoming County Clerks Association. The bill as originally written would have moved the first round of primaries from August to May of 2022 so that any potential runoffs could take place in August. However, Randall reports that this shift could have given election officials “less than two months to get ready for the primary election after the results of re-districting are known,” which proved to be a convincing argument to committee members.

It is, however, unlikely to appease the legion of Cheney haters who suddenly developed an intense interest in Wyoming election policy after the congresswoman voted to impeach Donald Trump in January. Cheney currently faces intra-party challenges from two legislators, state Sen. Anthony Bouchard and state Rep. Chuck Gray, and it’s very possible that other Republicans could also join the contest. A crowded field could split the anti-incumbent vote and allow Cheney to win with a plurality, which is why Junior wants to change the rules for 2022 to avert this possibility.

NORTH CAROLINA U.S. SENATOR — Democratic Gov. Roy Cooper said Thursday that he would not run for Senate next year, though there’d been no indication that he’d even been thinking about entering the race. Cooper told Politico, “I’ve promised the people four years as governor and that’s what I want to do,” though he also noted that his early departure would put Republican Lt. Gov. Mark Robinson, a far-right extremist with a history of anti-Semitic, Islamophobic, and transphobic screeds, in charge of the state.