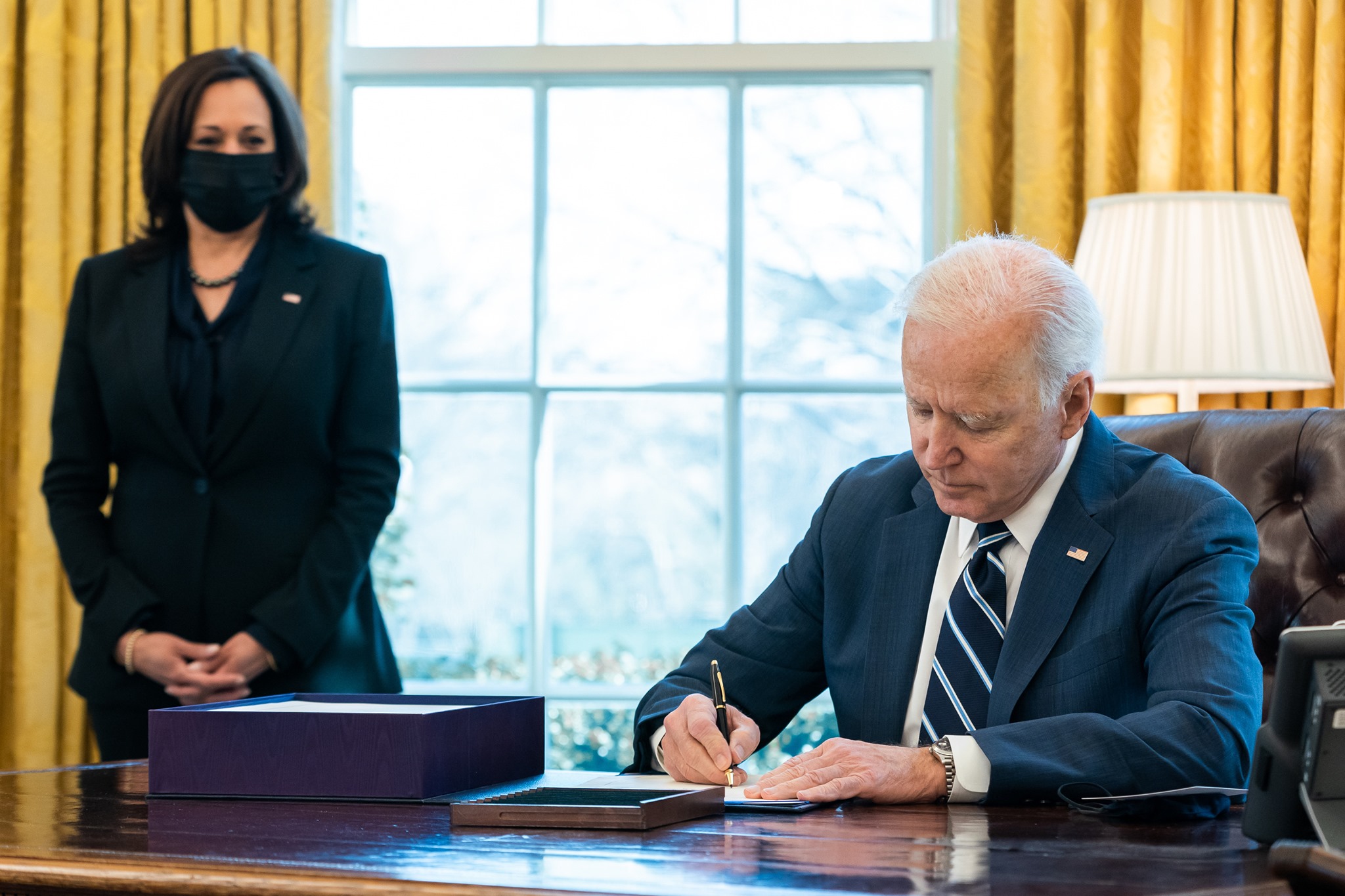 “President Biden signed a $1.9 trillion coronavirus relief package into law on Thursday, setting in motion a vast effort on the part of his administration to implement one of the largest stimulus measures in U.S. history.,” the Washington Post reports.

“Biden had initially intended to sign the bill on Friday, but White House aides said they received a copy of the legislation from Congress earlier than anticipated, allowing the president to put his signature on the proposal hours before he is set to deliver his first-ever prime time television address.”

New York Times on Biden’s new status as crusader for the poor: “It represents an evolution for Mr. Biden, who spent much of his 36 years in Congress concentrating on foreign policy, judicial fights, gun control and criminal justice issues by virtue of his committee chairmanships in the Senate. For the most part, he ceded domestic economic policy to others.”

“But aides say he has embraced his new role. Mr. Biden has done so in part by following progressives in his party to the left and accepting the encouragement of his inner circle to use Democratic power to make sweeping rather than incremental change. He has also been moved by the inequities in pain and suffering that the pandemic has inflicted on the poorest Americans, aides say.”

Politico: “Already, the president has been touting the measure, tweeting that ‘better days lie ahead,’ while his White House promoted announcements from Amtrak and American Airlines that furloughed employees will be brought back or not have their work interrupted.”

“For veterans of prior Democratic administrations, the aggressive sales job is a welcome change from the past, when the party often seemed to think major legislation would sell itself. But they warned that Biden needs to strike an appropriate balance, lest his new administration come off as out-of-touch with those who feel left behind or are struggling to cope with the lingering effects of the year-long pandemic.”

Dylan Matthews: “Fifty-seven years ago, a Democratic president who had a reputation as a moderate — and who had been a senator and vice president before reaching the highest office in the land — announced his administration would be waging ‘unconditional war on poverty in America.’”

“With Congress’s passage of the $1.9 trillion American Rescue Plan, another Democratic president with a reputation as a moderate (and who came through the Senate and the vice presidency) is putting his stamp on American policy. The Covid-19 relief bill, which passed the US House on Wednesday afternoon and is set to be signed into law by President Joe Biden on Friday, is the most far-reaching anti-poverty legislation in more than 50 years.”

GUN SAFETY BILLS AND THE FILIBUSTER. “A House-passed bill to expand gun background checks will be an early test of Democratic Sen. Joe Manchin’s commitment to the Senate rules that enable the Republican minority to block Democratic priorities,” Bloomberg reports.

“Manchin, together with Pennsylvania Republican Pat Toomey, led previous Senate efforts to expand background checks in 2013 following the 2012 massacre at Sandy Hook Elementary School. That bill was blocked by a Republican-led filibuster.”

FIGHTING REPUBLICANS ON COVID RELIEF. Sahil Kapur notes that President Biden’s pandemic relief plan has language that prevents states from using relief funds to cut taxes, and that if they do, the Treasury Department can move to recoup those funds.

Sen. Rick Scott (R-FL) “has a message for states and cities poised to receive a collective $360 billion from the American Rescue Act stimulus package: Send it back,” the Palm Beach Post reports.

“Scott’s call to reject money that polls show is popular nationally, even among Republicans, has flared tension between Scott and another Florida GOP leader, Gov. Ron DeSantis.”

Sen. Roger Wicker (R-MS), who voted against President Joe Biden’s relief plan, tried to take credit for the $28.6 billion in targeted support that goes to restaurants that have been hit hard by the pandemic.

“Although the California attorney general will still likely be among the most narrowly confirmed of Biden’s Cabinet nominees, Collins’ support ensures that he will have at least one Republican vote, and almost certainly avoids the need for Vice President Kamala Harris to break a tie vote in the Senate on his nomination.”

The U.S. Senate voted to confirm Michael Regan as the next administrator of the Environmental Protection Agency, Reuters reports.

CUOMO. There are now 59 Democratic lawmakers in New York calling for Gov. Andrew Cuomo (D) to resign, in light of a sixth sexual harassment allegation against him, Axios reports. The lawmakers say “he has lost the confidence of the public and the state legislature.”

NY1: “With 40 signatories in the Assembly, that number now surpasses a significant threshold. Assuming Cuomo refuses to resign, and these lawmakers are ready to take the next step with impeachment, they would now have more than the 76 votes needed to impeach.”

“A female aide to Gov. Andrew Cuomo alleges he aggressively groped her in a sexually charged manner after she had been summoned to the Executive Mansion late last year,” the Albany Times Union reports. “The staff member, whose identity is being withheld by the Times Union, had been called to the mansion under the apparent pretext of having her assist the governor with a minor technical issue involving his mobile phone. They were alone in Cuomo’s private residence on the second floor when he closed the door and allegedly reached under her blouse and began to fondle her.”

Albany police said that they had received a report from a state official about an alleged incident at the Executive Mansion involving Gov. Andrew Cuomo and a female aide that may have risen “to the level of a crime,” the New York Times reports.

All of the living former presidents have joined in a new ad campaign urging Americans to get the coronavirus vaccine—all of them, that is, except one.

Donald Trump didn’t take part in the campaign and instead issued a statement saying “I hope everyone remembers” the vaccine wouldn’t exist without him.

IRAN. New York Times: “Mr. Biden appears torn between allies in Europe and critics in Congress over broadening the nuclear accord to also limit Iran’s ballistic missiles program and its support for proxy militias across the Middle East.”

“Though many senior administration officials had negotiated the nuclear deal while working for President Barack Obama, and still support it, they also say they are unwilling to compromise further — particularly as Iran persistently tests Mr. Biden’s limits.”

“Iran’s leaders have warned that expanding the accord is a nonstarter, and European diplomats worry that broaching it in the delicate negotiations will scuttle the entire effort.”

Said Miller: “Would anybody have marched on the Capitol, and tried to overrun the Capitol, without the president’s speech? I think it’s pretty much definitive that wouldn’t have happened.”

He added: “It seems cause-and-effect. The question is, did he know he was enraging people to do that? I don’t know.”

THE BORDER. Washington Post: “HHS statistics show that 70 percent of unaccompanied minors are male, and that about 75 percent are ages 15 to 17. Teenagers making the journey are particularly vulnerable to exploitation, abuse and force recruitment by gangs, smugglers and predators. Sexual assault is common.”

“Most unaccompanied minors cross the border into the Rio Grande Valley of South Texas. Some try to evade capture after crossing, but most seek out U.S. border agents to begin the process of making a humanitarian claim.”

“The magnitude of the crisis facing President Biden at the U.S.-Mexico border came into clearer focus Wednesday as the new administration was holding record numbers of unaccompanied migrant teens and children in detention cells for far longer than legally allowed and federal health officials fell further behind in their race to find space for them in shelters,” the Washington Post reports.

“More than 8,500 migrant teens and children who crossed the border without their parents are being housed in Department of Health and Human Services shelters as they wait to be placed with relatives or vetted sponsors. Nearly 3,500 more are stuck at Border Patrol stations waiting for beds in those shelters to open up, the highest figure ever.”

VP HARRIS. CNN: “Thus far, Harris has not been tasked with a key portfolio issue distinct from President Joe Biden, who by this point in his vice presidency in 2009 was key in corralling votes for the Recovery Act and overseeing its implementation on his own.”

“Harris instead has wrapped herself around Biden’s singular legislative focus as his full partner, promoting the American Rescue Plan in public and behind the scenes, while also carving out interest areas of her own from foreign policy to small businesses.”

“Allies of Harris argue it’s still early for her to have her own portfolio since the administration’s focus has squarely been squarely on the pandemic, but they are watching closely to see what comes next.”

“Then-President Donald Trump urged the chief investigator of the Georgia Secretary of State’s office to look for fraud during an audit of mail-in ballots in a suburban Atlanta county, on a phone call he made to her in late December,” the Wall Street Journal reports.

During the six-minute call, Trump repeatedly said that he won Georgia: “Something bad happened.”

The Washington Post reported on the call in January, but this is the first time the recording has been released.

Perry Bacon Jr.: “Biden’s approach suggests that the former vice president took the same lesson from the Obama years that political experts and other Democratic politicians did: The GOP may be unwilling to reach deals with a Democratic president on major legislation, no matter its details. The Obama administration spent months in 2009 negotiating with congressional Republicans on the bill that is now known as Obamacare, even though it is now fairly clear that Republicans were never going to reach an agreement and make one of Obama’s signature pieces of legislation bipartisan.”

“If their approach to the COVID-19 relief bill is any guide, it looks like Biden and his aides aren’t exactly abandoning the president’s unity rhetoric from his inaugural speech — they’re just not willing to sacrifice legislative goals in chase of it. Instead, the Biden team is pursuing unity by performing the rituals of bipartisanship — holding regular meetings with congressional Republicans and being polite to them — and by pursuing legislation that is popular with a substantial number of Republicans voters (and continually emphasizing that point).”

“As the White House continues to work on another major spending bill to follow the $1.9 trillion stimulus, momentum is beginning to gather for what might become Congress’s second big piece of legislation in the Biden era: a bill aimed at countering China’s economic influence,” the Washington Post reports.

Chye-Ching Huang: “After a decade of budget cuts for the agency, the cracks in the I.R.S. are costing taxpayers trillions of dollars and growing impossible to ignore. The agency is increasingly unable to detect or address blatant tax cheating by high-income filers and the largest businesses.”

“In February, I.R.S. Commissioner Charles P. Rettig told Congress that about $570 billion in taxes owed in 2019 were not paid. That tax gap is projected to total about $7.5 trillion over this decade. Meanwhile, the I.R.S. answered fewer than a quarter of its phone calls from people seeking help with their taxes.