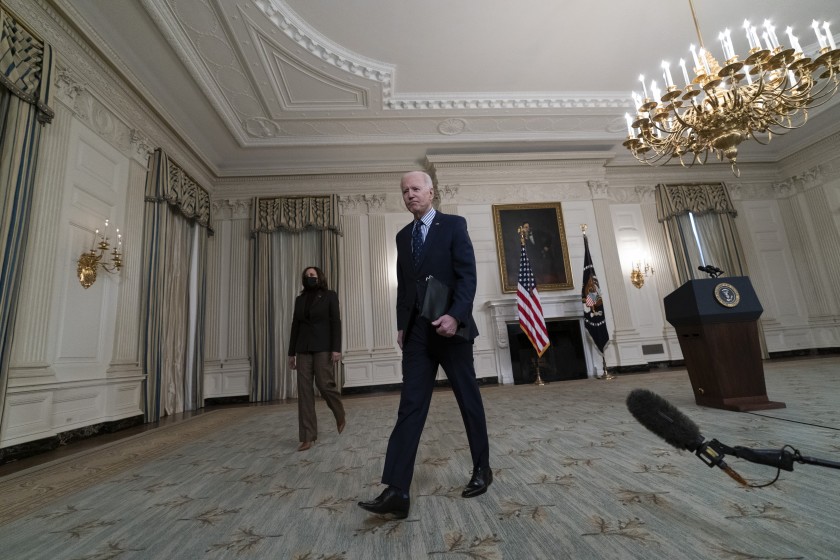 Congress approved a sweeping $1.9 trillion coronavirus relief package, 220 to 211, “authorizing a flurry of new federal spending and a temporary yet dramatic increase in anti-poverty programs to help millions of families still struggling amid the pandemic,” the Washington Post reports. President Biden is expected to sign the bill on Friday.

Axios: What’s in the bill?

White House press secretary Jen Psaki says President Joe Biden’s name will not appear on the memo line on the latest round of relief checks Americans will receive starting next week.

Now that the bill is passed and set to be signed, a Washington-wide effort to administer one of the largest economic relief packages in U.S. history” gets underway, the Washington Post reports. “Over the coming weeks, the Biden administration must send another round of one-time checks to millions of families, rethink vast portions of the U.S. tax code and dole out much-needed sums to help cash-strapped Americans, seeking to swiftly blunt an economic crisis that has left millions without jobs and falling further behind financially.”

Washington Post: “Biden aides and top Democrats have vowed to avoid what he sees as the Obama administration’s disastrous mistake of not touting its early wins, particularly the 2009 stimulus that was ridiculed by Republicans and, Democrats believe, never received sufficient recognition for its role in saving the economy.”

“Biden’s presidency, aides say, relies not just on squeezing legislation through a narrowly divided Congress, but getting credit for its benefits in the face of a Republican opposition preparing to portray the bill as a liberal fantasy run amok. And although the legislative battle is winding down, the political fight is only beginning.”

A new Urban Institute study finds President Joe Biden’s pandemic relief plan will reduce the projected poverty rate for 2021 by more than one-third, from 13.7% to 8.7%.

Jonathan Chait: “The Republican decision to vote against Biden in unison, without building much of a case against his bill, seems like the worst of all possible worlds. They are setting themselves against a bill that enjoys sky-high levels of support from both economic experts and a large chunk of their own base. It’s possible this gambit somehow works out. But if anybody regrets their political choices in the early weeks of the administration, the odds are it won’t be Biden.”

Politico on the fact that $60 Billion in new taxes were included in the American Rescue Plan: “One takes away deductions for publicly traded companies that pay top employees more than $1 million. Another provision cracks down on how multinational corporations do their taxes. A third targets how owners of unincorporated businesses account for their losses.”

“It’s surprising because Democrats were widely expected to put off their tax-increase plans until later… But they ran into problems complying with the stringent budget rules surrounding so-called reconciliation measures like the coronavirus legislation — especially after some wanted to add provisions like one waiving taxes on unemployment benefits.”

The Senate voted to confirm Rep. Marcia Fudge (D-OH) as secretary of housing and urban development, making her the first Black woman to lead the agency in more than four decades, the Washington Post reports.

“After slow early progress on approving President Joe Biden’s Cabinet nominees, the Senate is finally on track to catch up to its pace of confirmations at the beginning of the Trump and Obama administrations,” Politico reports.

“With Donald Trump’s impeachment trial over and Biden’s $1.9 trillion coronavirus relief package passed, the Senate is spending this week on a confirmation blitz. The chamber is set to approve Biden’s picks to lead the Justice Department, the Department of Housing and Urban Development and the Environmental Protection Agency.”

“A sixth woman has come forward and leveled allegations of sexual harassment or inappropriate conduct against Gov. Andrew M. Cuomo, telling a supervisor in the Executive Chamber recently that the governor inappropriately touched her late last year,” the Albany Times Union reports.

Sen. Kirsten Gillibrand (D-NY) continued to urge for an investigation to be concluded before making any decision on whether Gov. Andrew Cuomo should stay in office amid sexual harassment allegations, USA Today reports.

“And the Democratic senator, who was the first to call for Sen. Al Franken’s resignation in 2017 amid sexual harassment claims, said she resents the fact that women in leadership have to be asked every day about whether someone in hot water should resign.”

Said Gillibrand: “Asking every female elected in our state when a person should resign or not resign really isn’t the conversation we should be having.”

Charlie Cook argues that by using the Senate’s reconciliation procedure to pass his relief bill, Biden may have harmed his future legislative prospects.  “Biden may have, in the early moments of his term, crippled his ability to do grand bargains.”

“When the histories of the Biden presidency are written, there’s a fair chance that this will be looked upon as a serious error of judgement—one that may plague this administration for a good while.”

“The legislation—following trillions of dollars in federal aid last year and arriving amid rising Covid-19 vaccination rates—prompted economists surveyed by The Wall Street Journal in recent days to boost their average forecast for 2021 economic growth to 5.95%, measured from the fourth quarter of last year to the same period this year. That was up from their 4.87% projection last month and would be the U.S. economy’s fastest since a 7.9% burst in 1983.”

Morgan Stanley raised their 2021 forecast for U.S. economic growth to 7.3% from 6.5%, a pace unsurpassed since the Korean War boom in 1951, Bloomberg reports.

Axios notes the spending comes out to “just over $43,000 per U.S. household — the type of spending that would have been unthinkable as recently as 2009, when Biden last took office.” However, the American public is firmly behind Biden with 68% in a new Quinnipiac poll supporting the latest package. And the spending may continue as Democrats look to pass a massive infrastructure package by July 4.

Economists now predict the economy will grow at a pace of well over 6% for the rest of 2021. Just a year ago — before we fully understood the extent of the pandemic — the consensus was that the economy would grow by roughly 2% this year.

Biden will address the nation Thursday evening to talk about the crisis and his plan. In doing so, he’s also staking his claim for the coming economic boom.

CNN: “Discussions within the Senate Democratic Caucus are expected to pick up steam in the coming days to see if they can unify behind a single plan.” However, Playbook tries to decode Sen. Joe Manchin’s (D-WV) statements on the filibuster over the weekend and it turns out he’s not as open to change as he seemed to indicate.

“We made a big mistake in 2009 and 2010. Susan Collins was part of that mistake. We cut back on the stimulus dramatically and we stayed in recession for five years.” –Sen. Chuck Schumer, interviewed on CNN, when asked whether he should have done more during the relief package negotiations to win Republican votes like that of Sen. Susan Collins (R-ME).

Schumer (D-NY) boasts about his extensive relationships in a New York Times interview, but it appears there’s one senator who still really doesn’t like him: Susan Collins (R-ME). “Mr. Schumer’s political action committee ran ads accusing Ms. Collins’s husband of enriching himself through the opioid crisis and charging that she had ‘pocketed’ money from drug companies.”

Said Collins: “His tactics were unworthy of a Senate race.” Collins (R-ME) fired back at Senate Majority Leader Chuck Schumer (D-NY) after he pointedly said it was a “big mistake” to shrink the 2009 economic stimulus package in order to win her vote, NBC News reports. Said Collins: “I thought that Leader Schumer’s comments were bizarre.”

Collins pointed out that she supported Barack Obama’s $787 billion package: “He voted for the same package that I did. So, for Chuck Schumer, who was intimately involved in the negotiations as the assistant leader, to somehow criticize me for taking the same position that he did, is simply bizarre. And I think it reflects regrettably his inability to accept the fact that despite pouring $100 million into defeating me, the people of Maine said no.”

Susan Collins needs to put on her big girl pants. She is not entitled to her seat by divine right. We can and we will try to take it from her in this thing called elections. She won and she gets to crow, but she needs to grow up and get over her hurt feelings that someone like Chuck Schumer dared to challenge her position.

Politico: “A frustrated slice of the GOP conference is attempting to hamstring the House by refusing to allow quick passage of non-controversial bills — instead forcing every member to cast their vote on the floor and sometimes adding extra procedural votes.”

“In some ways, the GOP’s tactics are an escalation of how hard-line conservatives have exercised their power for years … But Democrats warn that this latest gambit from the right could erode one of the last vestiges of bipartisanship in the House … Democrats argue that attempting to force House votes late into the night for little purpose other than agitation could dramatically slow the chamber’s work for years to come.”

“That figure was more than double the 18 Republicans who voted against her motion last week to end House business for the day.”

Wall Street Journal: “In recent weeks, the Manhattan district attorney’s office has issued new subpoenas and requested recordings of local government meetings related to the Trump Organization’s failed attempt to create a luxury subdivision at Seven Springs, a 213-acre property that the former president bought for $7.5 million in 1995.

“Mr. Trump has valued the property at up to $291 million in financial statements that the New York attorney general’s office, which is also investigating Seven Springs, said were given to financial institutions. Inflating assets to help secure loans or other financial benefits can be a state criminal offense.”

Associated Press: “The conservatives’ relentless focus on culture wars rather than the new president highlights both their strategy for regaining power in Washington and their challenge in doing so. Unlike previous Democratic leaders, Biden himself simply isn’t proving to be an easy target or animating figure for the GOP base, prompting Republicans to turn to the kind of cultural issues the party has used to cast Democrats as elitist and out of touch with average Americans.”

“The challenge is a continuation of the 2020 campaign, when then-President Trump struggled to land a consistent attack on Biden. The branding of Biden as ‘sleepy’ never stuck in the same way as Trump’s derision of Hillary Clinton as ‘crooked’ in 2016. Other GOP efforts to define Biden as a radical or to attack his mental acuity also didn’t resonate.”

“This is about the Democrats don’t believe that deficits matter anymore. They’ve got control, so they’re going to spend as much money as they can.”  — Sen. John Kennedy (R-LA), suddenly concerned about deficits in an interview with The Hill.

Arkansas Gov. Asa Hutchinson (R) signed a bill into law Tuesday banning almost all abortions in the state, except for when a pregnant person’s life is in danger.

The Oklahoma House of Representatives passed a bill aimed at protecting drivers who hit protestors while “fleeing a riot,” KOCO reports.

“Heaven forbid we pass something that’s going to help the damn workers in the United States of America… Now stop talking about Dr. Seuss, and work with us.”

— Rep. Tim Ryan (D-OH), yelling at the GOP on the House floor over a union organizing bill.

President Biden will announce today that he has directed his administration to purchase an additional 100 million doses of the Johnson & Johnson coronavirus vaccine, the New York Times reports.

Biden’s goal is to secure enough supply to vaccinate children and — if necessary — administer booster shots to increase protection against new variants of the virus.