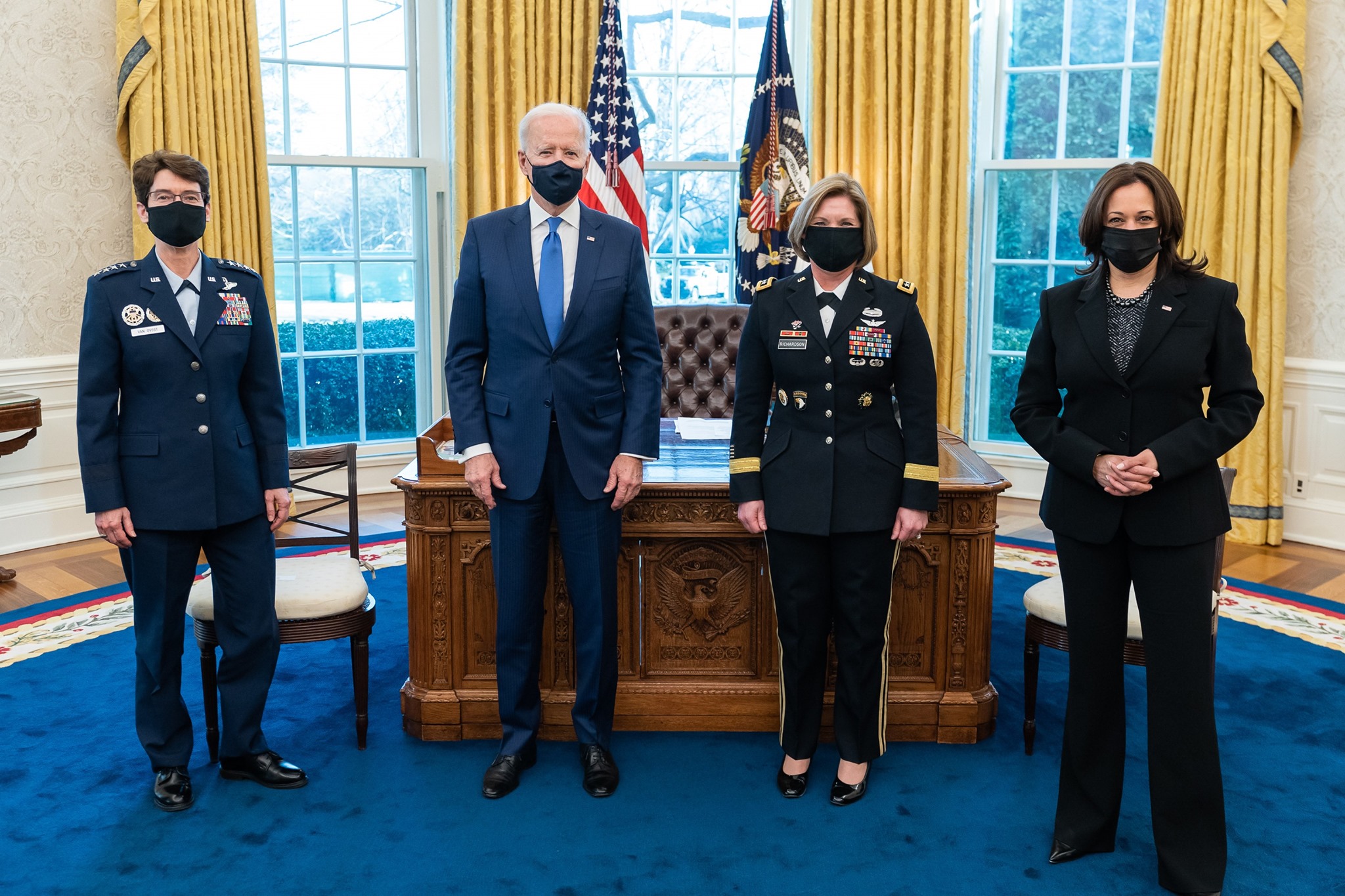 Politico: “Democrats are readying a final vote on President Joe Biden’s $1.9 trillion pandemic aid package as soon as Tuesday, executing on the measure in less than eight weeks – and making a political bet on mammoth federal spending to boost the economy.”

“In the House, which will send the bill to Biden’s desk, Democratic lawmakers and aides acknowledged that a passage vote could slip to Wednesday as Senate officials race to prepare necessary paperwork. But they vowed a one-day delay would not have an impact on boosted jobless benefits set to expire this weekend.”

“Several million people stand to save hundreds of dollars in health insurance costs, or more, under the Democratic coronavirus relief legislation on track to pass Congress,” the Associated Press reports.

“Winners include those covered by Obamacare or just now signing up, self-employed people who buy their own insurance and don’t currently get federal help, laid-off workers struggling to retain employer coverage, and most anyone collecting unemployment. Also, potentially many more could benefit if about a dozen states accept a Medicaid deal in the legislation.”

“Taken together, the components of the coronavirus bill represent the biggest expansion of federal help for health insurance since the Obama-era Affordable Care Act more than 10 years ago.”

E.J. Dionne Jr.: “Now, you could argue that Biden’s relentless attention to the pandemic, and the work of economic relief and recovery, is simply common sense. And it is. These, more than any others, are the issues by which he will be judged.”

“But the president and his team have exercised enormous discipline in keeping the national conversation focused on bread-and-butter assistance to the vast majority of Americans. It’s one reason his $1.9 trillion aid package that cleared the House and then passed the Senate on Saturday with only Democratic votes polls so well.”

“And whenever he could, Biden has tried to shift the conversation about the pandemic away from cultural conflict and toward the practical work of ending the scourge.”

“Thousands of migrant children are backed up in United States detention facilities along the border with Mexico, part of a surge of immigration from Central Americans fleeing poverty and violence that could overwhelm President Biden’s attempt to create a more humane approach to those seeking entry into the country,” the New York Times reports.

“The number of migrant children in custody along the border has tripled in the past two weeks to more than 3,250, according to federal immigration agency documents obtained by The New York Times, and many of them are being held in jail-like facilities for longer than the three days allowed by law.”

NBC News: “A record number of unaccompanied migrant children are in Border Patrol custody and shelter beds are scarce, raising fears of a new humanitarian crisis at the southern border.”

“House Minority Leader Kevin McCarthy will travel to Texas on Monday with roughly a dozen Republican members to assess the growing humanitarian crisis at the southern border,” Axios reports.

“The visit comes as President Biden is under increased pressure to address the overwhelming flow of unaccompanied migrant children at the U.S.-Mexico border. Recent data shows an average of 321 kids being referred to migrant shelters each day.”

“Harris has spoken independently of Biden to at least six world leaders, the White House says, an unusually large number for a new vice president; joined his virtual White House summit with Canadian Prime Minister Justin Trudeau; and given remarks at the State Department.”

The Atlantic: “Sinema’s approach has made her perhaps the most enigmatic member of the new Democratic majority. She began her career as an anti-war activist during the George W. Bush administration and then transformed herself into a centrist, becoming in 2018 the first Democrat elected to the Senate from Arizona in 30 years.”

Said Rep. Andy Biggs (R-AZ): “Quite frankly, Kyrsten may be the most skilled political figure in Arizona. She reads her constituency as good as or better than virtually any person in political life that I know.”

Jonathan Bernstein: “The way that filibusters work in the Senate now is mostly invisible. The minority (typically the minority party, although it could be any group of senators who want to block a bill or an amendment) informs the majority that it will object to allowing a vote. The majority then either backs off and pulls the item off the Senator floor, or — if it has the votes — files for cloture to end debate and bring the matter to a vote and, if there are 60 votes, defeat the filibuster and eventually pass the item. No one gives extended speeches. A successful filibuster is usually invisible, with the majority never bringing the bill up for debate.”

“This makes people carried away by Jimmy Stewart sad. Or perhaps they mistakenly believe that the majority is letting the minority get away with something. But the truth is that the modern silent filibuster was invented by ruling Democrats a half-century ago to help the majority, not the minority. Filibustering by notification allows the majority party to get other things done, instead of wasting scarce Senate time on something that doesn’t have the votes for cloture.”

Ramesh Ponnuru: “The more partisan the narrative, the worse it has fared. Liberals have spent much of the pandemic fretting about red-state irresponsibility. But the four states with the highest percentage of Covid deaths all vote consistently for Democratic presidential candidates. Florida, though a consistent target of progressive criticism, has a death rate well below the national average. Some conservatives, for their part, predicted that we’d stop hearing about the pandemic as soon as the election was over. Instead, the deadliest weeks came after it, and both politicians and the press kept talking about it.”

“Our thinking about the American response to Covid has too often followed this kind of partisan script.”

David Leonhardt: “It’s one of the biggest mysteries about Covid-19: Why has the death toll been relatively low across much of Africa and Asia?”  “The virus has killed a fraction of as many people on those continents — despite their relative lack of resources — as it has in Europe or the U.S.”

Wyoming’s governor announced the state “will remove its statewide mask requirement and allow bars, restaurants, theaters and gyms to resume normal operations on March 16.”  Only one specific restriction was announced that would remain in place: face coverings for K-12 schools.

Associated Press: “While much of the [vaccine disinformation] material is coming from domestic sources such as Spanish-speaking social media ‘influencers,’ it increasingly originates on online sites in Latin America, those studying it closely say.”

“Misinformation originally promoted in English is translated in Colombia, Brazil, Mexico, Nicaragua and elsewhere, then reaches Hispanic voters in the U.S. via communications from their relatives in those countries. That is often shared via private WhatsApp and Facebook chats and text chains.”

“Major, who was adopted by Biden in November 2018 from a Delaware animal shelter, had what one of the people described as a ‘biting incident’ with a member of White House security.”

A White House official tells NBC News: “Yes, they will be back.”

“The White House has returned paintings of Bill Clinton and George W. Bush to prominent locations in the Grand Foyer after Donald Trump hid them in a room used for storage,” the Daily Mail reports.

“The official presidential portraits were visible in the entrance hallway of the executive mansion in a video the White House posted to its social media accounts in honor of Black History Month.”

Daily Beast: “Rep. Dan Crenshaw (R-TX) did not buy or sell any stocks in his first 13 months as a congressman. That changed in March 2020, when he made half a dozen buys as the largest economic relief package in history was written and debated.”

“Five of those purchases came in the three days between March 25 and 27, as the Senate and House voted on the CARES Act and former President Trump signed it into law. Crenshaw, who supported the bill, did not initially disclose the transactions, in violation of the STOCK Act.”

For the better part of a month, talks about impeachment proceedings have swirled around Jason Ravnsborg (R), who killed a pedestrian with his vehicle in September, the Sioux Falls Argus Leader reports.

But any future proceedings aimed at removing him from office won’t happen until after he resolves the three misdemeanor criminal charges he’s facing now.

“Both of those bills were approved by a Republican-controlled Senate – and Cotton voted for both of them.”