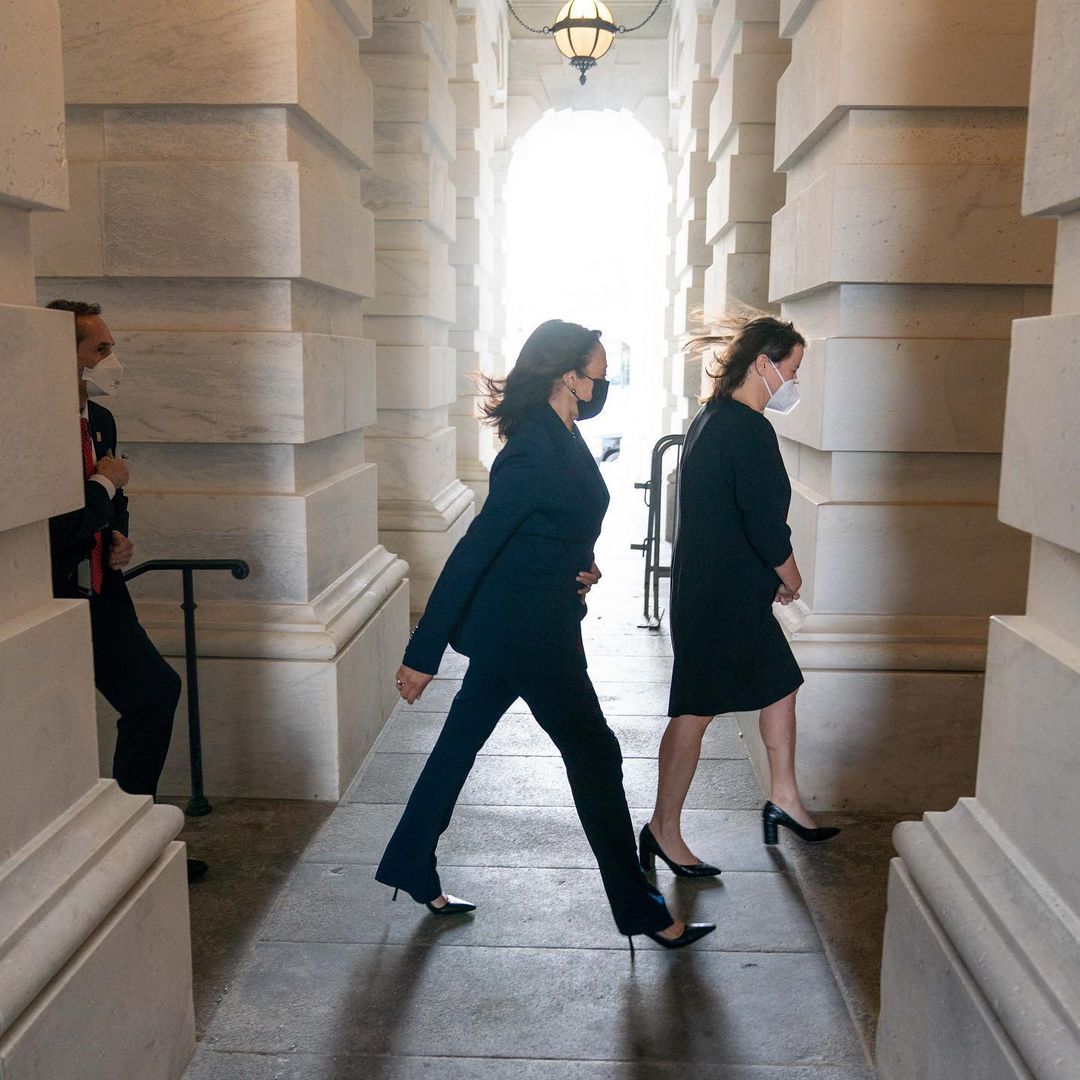 President Biden will deliver a prime-time address on Thursday to commemorate the one-year anniversary of the covid “shutdown” and to talk about the role “Americans will play in beating the virus,” the Washington Post reports.

Ezra Klein: “The White House just sent Congress the most ambitious immigration reform bill in years. It midwifed a deal to get Merck to mobilize some of its factories to produce Johnson & Johnson’s vaccine, and now Biden is saying there should be enough of a supply for every American adult to get vaccinated by the end of May. Imagine! The administration is also working on an infrastructure package that, if early reports bear out, will be the most transformational piece of climate policy — and perhaps economic policy — in my lifetime. Biden is blitzing.”

“This is roughly the opposite of how Donald Trump approached his presidency.”

Sen. Joe Manchin (D-WV) told Axios that he’ll block President Joe Biden’s next big legislative package — $2 trillion to $4 trillion for climate and infrastructure — if Republicans aren’t included.  Said Manchin: “I’m not going to do it through reconciliation. I am not going to get on a bill that cuts them out completely before we start trying.”  Manchin added the infrastructure bill can be big as long as it’s paid for with tax increases. He said he’ll start his bargaining by requiring the package be 100% paid for.

Jonathan Chait: “Ironically, it is the misleading nature of pro-filibuster propaganda that has enabled Manchin to co-opt its themes. Filibuster advocates present the device as a requirement to allow ‘debate,’ likening it to a kind of free-speech right for senators.”

“In fact, the modern filibuster inhibits rather than enables debate. So Manchin can propound on the need to allow consideration of bills, and permit Republicans to speak on them extensively, because those are not the actual goals of filibuster supporters. The real purpose of the mechanism is to impose a 60-vote requirement (one that has already been eliminated for executive-branch appointments, fiscal policy, and judges).”

Associated Press: “President Joe Biden is the first executive in four decades to reach this point in his term without holding a formal question and answer session. It reflects a White House media strategy meant both to reserve major media set-pieces for the celebration of a legislative victory and to limit unforced errors from a historically gaffe-prone politician.”

“Biden has opted to take questions about as often as most of his recent predecessors, but he tends to field just one or two informal inquiries at a time, usually in a hurried setting at the end of an event.”

Huffington Post: “Democrats in the Senate narrowly passed a mammoth coronavirus aid package Saturday morning that is likely to become a landmark for progressive legislation.”

“In fact, the legislation includes so many notable, big-ticket provisions that it’s gaining almost no attention for another notable feature: rescuing the pensions of more than a million workers and retirees.”

Jonathan Bernstein: “Another conclusion that some pundits reached over the weekend was that Biden has been, once again, underrated. That may be correct, but it also is another example of how journalists treat legislating (and everything else in Washington) as primarily about the presidency.”

“To be sure, by all accounts the White House did take a lead role in putting together this relief package, which is a return to the way things were normally done before the presidency of Donald Trump. But Congress passed the relief bill, and it’s tempting to overlook just how easy it would have been for things to go wrong, especially in the House. Speaker Nancy Pelosi makes it all look inevitable, but it most definitely is not — as anyone who remembers the frequent internal party fights under Republican Speakers Paul Ryan or John Boehner or, for that matter, Democrat Tom Foley.”

Washington Post: “The promise was clear and hopeful: With strong public health measures, then-President-elect Joe Biden declared in early December, ‘the majority of our schools can be open by the end of my first 100 days.’ The reality has been far more complicated.”

“Unlike many of his other vows and directives — pledging 100 million coronavirus vaccine doses in his first 100 days or mandating that all Americans wear masks on federal property — reopening schools is a daunting task over which the federal government has little authority. Local and district leaders, and sometimes state officials, control how and when schools reopen, with guidance from Biden and his team on the margins.”

Reuters: “The U.S. House of Representatives is set to vote on Wednesday on a pair of bills to expand background checks before gun purchases, two years after a similar House effort failed to make it through the Senate.”

“The U.S. is on course for an employment boom this year once pandemic restrictions ease and the economy reopens, according to economists at Goldman Sachs,” Bloomberg reports.

“Democrats passed an unapologetically progressive stimulus bill through the Senate this weekend, one that Sen. Bernie Sanders has called ‘the most significant piece of legislation to benefit working families in the modern history of this country,’” Vox reports.

“This bill would not be on the brink of becoming law if Democrats did not have a governing trifecta in the White House, the Senate, and the House. And that trifecta in turn would not have been possible were it not for the defection into the Democratic column of a particular, and perhaps surprising, demographic: suburban whites with college degrees.”

“These voters, once a reliably Republican constituency, switched in large numbers in 2018, handing Democrats decisive House seats in places like California’s Orange County. In 2020, they helped elevate Joe Biden to the White House by turning out for him in places like Pennsylvania’s Montgomery County.”

Playbook: “The twin crises of disease and recession boosted support for government intervention well beyond what has been tolerated for decades; Donald Trump and the GOP’s own support for the last two bills depolarized the fight over this one; Biden’s opposition was distracted by internal divisions (Jan. 6, impeachment, McCarthy vs. Cheney, Trump vs. McConnell); and the conservative media was distracted by juicier fare than tax policy.”

“If you’ve watched Fox News every night during the Biden presidency (we have), it’s that last point that’s the most notable. We’ve learned a couple of things: 1) The MyPillow guy has really expanded beyond pillows, and 2) Fox’s most-watched hosts care a lot more about cancel culture, Dr. Seuss and antifa’s alleged (but, according to the FBI, nonexistent) role on Jan. 6 than they do about Biden’s American Rescue Plan.”

Wall Street Journal: “The U.S. and South Korea have reached agreement on a new accord that would resolve a yearslong dispute on how to share the cost of American troops based on the Korean Peninsula, officials from the two countries said Sunday.”

“The new accord, which would last through 2025, would provide for a ‘meaningful increase’ in the South Korean contribution.”

NBC News: “Bernie Sanders, Josh Hawley, and Amazon don’t often find themselves on the same side of an issue.”

“But years of stagnant wages that have failed to keep up with living costs and the political realignment spurred by Donald Trump are bringing together more than just Sanders, the independent senator from Vermont; Hawley, the Republican senator from Missouri; and Amazon, one of America’s biggest businesses.”

“The politics of the minimum wage have been scrambled, dividing the business community and making strange bedfellows out of populists on the right and the left.”

Washington Post: “While other groups have also been wary about the shots, for instance, communities of color, polling shows that hesitancy has started to wane while GOP resistance to the vaccines remains relatively high. A Kaiser Family Foundation poll released last month found that 28 percent of Republicans said they would “definitely not” get vaccinated, and another 18 percent said they would ‘wait and see’ before getting a shot.”

“As a result, millions of Republicans could remain unvaccinated, a potential roadblock to efforts to achieve the high levels of immunity needed to stop the virus in the United States — an irony that isn’t lost on Trump officials who worked to end the pandemic.”

Washington Post: “Everywhere, there are signs seen and unseen that Minneapolis is bracing for the landmark trial of the former police officer charged with second-degree murder and manslaughter in Floyd’s death. Jury selection is set to begin Monday in the case, which is poised to be a defining moment in the history of a nation that is grappling with a racial reckoning.”

“However, the judge is considering a last-minute addition of a third-degree murder charge that would give prosecutors another avenue for conviction, but with a shorter prison term. The addition — or a decision to not add the charge — could trigger an appeal from either side. The judge’s decision, which might not come until Monday morning, has injected even more uncertainty into the case, heightening tension in a city already on edge.”

President Biden nominated two female generals to oversee four-star commands on Saturday, after their promotions were delayed under former President Trump due to concerns that he “would reject the officers because they were women,” the New York Times reports.