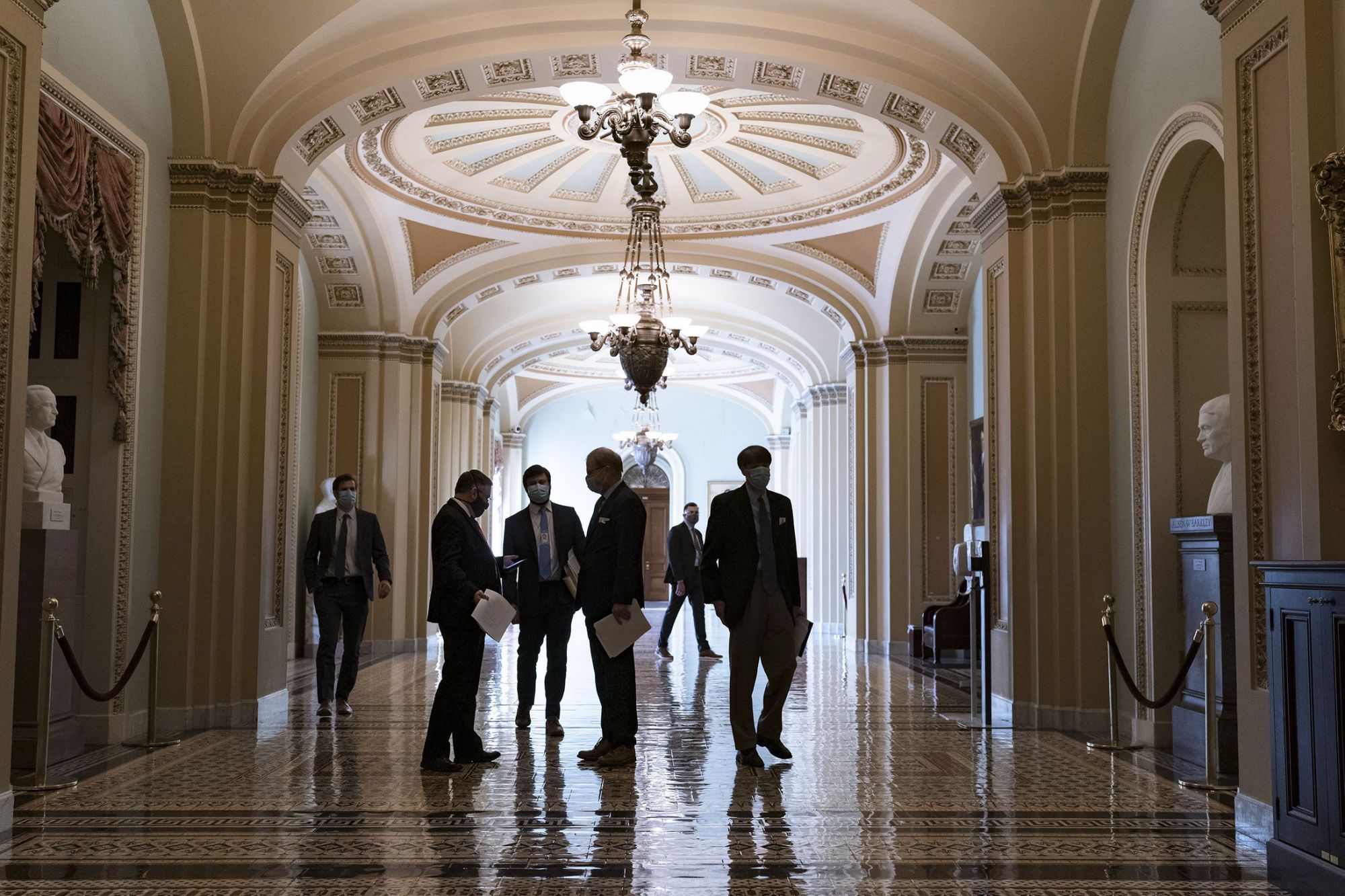 The Senate approved President Joe Biden’s coronavirus relief plan on Saturday afternoon, after a roughly 24-hour marathon of debate pushed the $1.9 trillion dollar  bill to the brink of a legislative win for the new president who vowed to prioritize pandemic aid.

The Senate passed the measure in a 50-49 vote over unanimous Republic opposition. It will now return to the House which is expected to pass the bill quickly, setting the stage for Biden to sign the package into law within days.

“This bill will deliver more help to more people than anything the federal government has done in decades,” Senate Majority Leader Chuck Schumer (D-NY) said just before the bill’s approval.

An additional $300-per-week in unemployment payments until Labor Day, was also approved, cutting back the amount the House Democrats had approved for jobless aid earlier this month. Unemployment aid discussions extended into a lengthy nine-hour back as Sen. Joe Manchin (D-WV), fought to beat back benefits.

Wall Street Journal on a very good provision that actually did make it into the Senate COVID bill: “The provision, added by Senate Democrats this week, would remove any tax consequences for households whose student debt is forgiven through 2025, saving them thousands of dollars. Federal law typically treats any forgiven debt as taxable income.”

“The provision would make it easier for President Biden to forgive student debt through executive action, as congressional Democrats have pressed him to do.”

“With a $1.9 trillion economic aid package […] passing Congress and the pace of vaccinations picking up, some economists, Republican lawmakers and Wall Street traders are increasingly raising a counterintuitive concern: that the economy, still emerging from its precipitous pandemic-induced drop, could be on a path toward overheating,” the New York Times reports.

“The Biden administration rejected that argument again on Friday. Despite a stronger-than-expected jobs report, the president and his aides said there was still a long way to go to ensure the benefits of the recovery flow to workers hardest hit by the pandemic, who are predominantly people of color.”

“The Los Angeles Times has filed a federal lawsuit seeking to unseal the warrant that authorized federal authorities to search Sen. Richard Burr’s (R-NC) cellphone as part of the FBI investigation into stock trades just as the coronavirus pandemic began to surge across the country,” the Los Angeles Times reports

“The lawsuit, which was filed Feb. 24 but became public late Tuesday, seeks to have a federal judge make public the warrant, supporting affidavits and related materials connected to the search of the North Carolina senator’s phone.”

“President Biden is expected to name Tim Wu, a Columbia University law professor, to the National Economic Council on Friday as a special assistant to the president for technology and competition policy, according to a White House official, putting one of the most outspoken critics of Big Tech’s power into the administration,” the New York Times reports.

“U.S. Capitol Police have requested a 60-day extension of some of the 5,200 National Guard members activated in the District of Columbia in response to security threats and the Jan. 6 assault on Congress,” the Washington Post reports.

Associated Press: “The acting chief of the U.S. Capitol Police says there has been a more than 93% increase in the number of threats received by members of Congress in the first two months of this year compared with the same period last year.”

“Federal investigators are examining records of communications between members of Congress and the pro-Trump mob that attacked the US Capitol, as the investigation moves closer to exploring whether lawmakers wittingly or unwittingly helped the insurrectionists,” CNN reports.

“The data gathered so far includes indications of contact with lawmakers in the days around January 6, as well as communications between alleged rioters discussing their associations with members of Congress.”

“A member of the far-right nationalist Proud Boys was in communication with a person associated with the White House in the days just before the Jan. 6 assault on the Capitol,” the New York Times reports.

“Location, cellular and call record data revealed a call tying a Proud Boys member to the Trump White House… The F.B.I. has not determined what they discussed, and the official would not reveal the names of either party.”

Insider: “Warren made the case for more IRS auditors as part of her pitch for a 2-3% annual tax on the wealth of America’s ultra-rich.”   “Her proposal calls for a $100 billion investment in IRS enforcement and a statutory requirement that no less than 3 in 10 people subject to the ‘ultra-millionaire tax,’ on fortunes greater than $50 million, be audited each year.”

“A grand jury is expected to be seated this week in Fulton County, Georgia, to look into efforts by Donald Trump to overturn the 2020 election, signaling that the county’s investigation into the former president is intensifying,” ABC News reports.  “Prosecutors are expected pursue subpoenas for documents and witnesses and rely heavily on them.”

“The Legislature approved the grant plan in October, but the family businesses benefitted from adjustments the Republican governor made.”

Former Illinois Gov. Bruce Rauner (R) made a $250,000 campaign contribution to Florida Gov. Ron DeSantis (R) last week after seniors in the uber-wealthy Florida Keys enclave where Rauner owns a home were among the first in the state to receive COVID-19 vaccinations in January, the Chicago Tribune reports.

Federico Guillermo Klein, a former Trump appointee who was arrested for his role in the Jan. 6 Capitol riot, complained that he won’t be able to sleep in prison, the Washington Post reports.

Said Klein: “I wonder if there’s a place where I can stay in detention where I don’t have cockroaches crawling over me while I attempt to sleep… I mean, I really haven’t slept all that much, your honor.”

He added: “It would be nice if I could sleep in a place where there were not cockroaches everywhere.”

This is quite a story from the Detroit Free Press: “A confidential FBI informant testified Friday in a Jackson court about being embedded for months alongside leaders of a group accused of plotting to kidnap Gov. Gretchen Whitmer.”

“The informant’s identity was concealed for his safety. Introduced only as ‘Dan,’ an online video feed of Friday’s hearing was cut off during his testimony so court observers only could hear him.”

“Dan described learning of the group — known as the Wolverine Watchmen — through a Facebook algorithm that he believed made the suggestion based on his interactions with other Facebook pages that support the Second Amendment and firearms training.”

“A bill moving through Kentucky’s Senate would make it a crime to insult or taunt a police officer during a riot,” CBS News reports.  “Supporters say the bill targets people who unlawfully ‘cross the line’ but opponents call it a blatant attempt to crush protests and a violation of First Amendment rights.”

Fox Corp. CEO Lachlan Murdoch said it is the job of Fox News to serve as the “loyal opposition” to the Biden administration, stating clearly the political biases of a network that until 2017 billed itself as “fair and balanced,” NBC News reports.