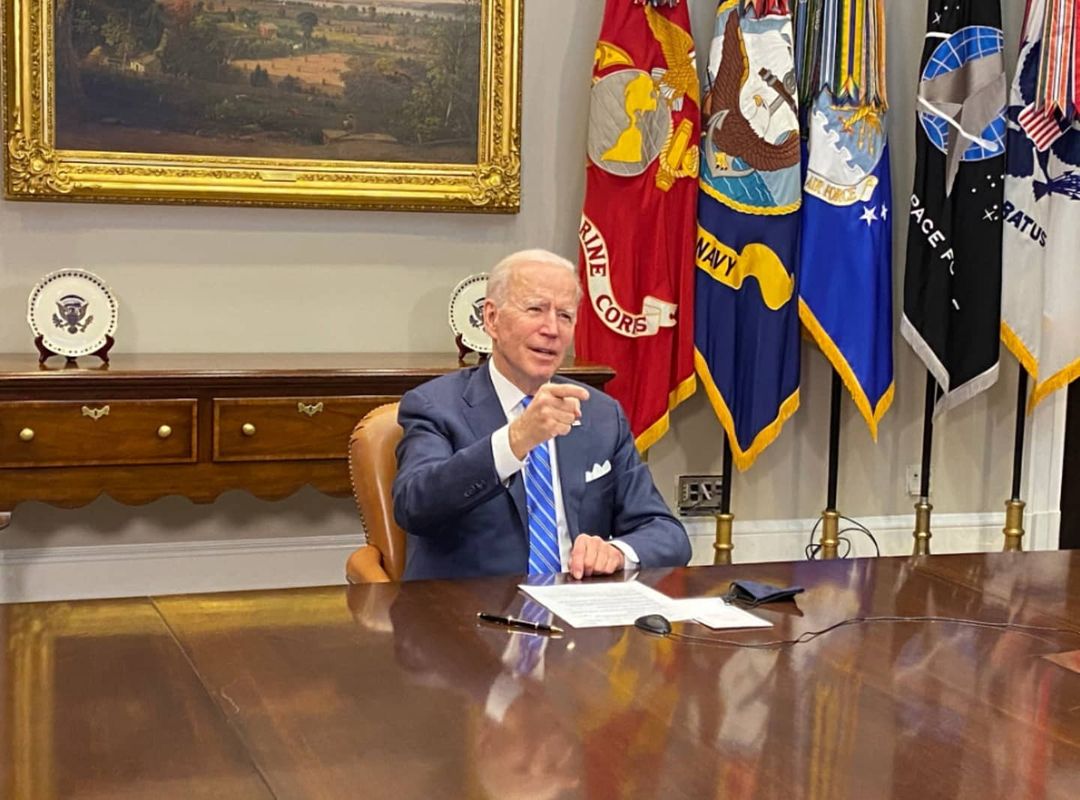 “The agreement would extend the existing $300 weekly unemployment benefit through Sept. 6, as well as provide tax relief on benefits for households making under $150,000.”

New York Times: “The agreement came after a nine-hour impasse that paralyzed efforts to move Mr. Biden’s stimulus bill through the Senate, after Senator Joe Manchin III of West Virginia raised concerns that an overly generous benefit could discourage people from returning to work.”

“By late Friday, Democrats had reached a compromise that appeared to satisfy Mr. Manchin.”

Senate Majority Leader Chuck Schumer thanked Senate clerks after they were forced to spend more than 10 hours reading the pandemic relief bill. He called out Sen. Ron Johnson (R-WI), who forced the procedure: “And as for our friend from Wisconsin, I hope he enjoyed his Thursday evening.”

“Senators vanished from the U.S. Senate chamber on Thursday as clerks begin reading the upper house’s 628-page coronavirus relief bill, with Sen. Ron Johnson (R-WI), who objected to waiving its reading as a way to delay the process, chatting and looking at his phone during parts of the reading,” Forbes reports. But then Johnson left. And when the clerks completed the reading in the middle of the night, no Republican Senator was present, including Johnson. So Senator Chris Van Hollen (D-MD) immediately moved to reduce debate on the bill from 20 hours to 3 hours, starting at 9 am Friday and ending at 12 pm Friday. The motion carried, meaning that the bill that Johnson and the evil Repubicans tried to slow is moving even faster to passage, expected now on Saturday or Sunday.

As part of the Vote-a-Rama on Amendments to the bill, eight Democrats joined with Republicans to vote down Bernie Sander’s $15 minimum wage bill. Those Democrats included Sinema, who is shown below disgracefully voting no with glee, Manchin, our wonderful Senators Carper and Coons, Hassan, Shaheen, King and Tester. Now some of these Senators said they voted no due to the Parliamentarian’s ruling, and some said they were worried that adding this Amendment to the bill would sink the entire package, and some, like apparently Sinema and Manchin, just hate working people.

Sen. Dan Sullivan (R-AK) has had to leave Washington in the middle of the pandemic relief bill debate because of a family issue, Punchbowl News reports.

Sullivan’s absence means that Republicans will have one less vote as they try to advance amendments to the bill.

“Pressure is building on President Biden, a longtime backer of traditional Washington rules, to do away with the filibuster and other procedures, as Democrats press him to seize what could be a fleeting moment of power to enact a progressive agenda,” the Washington Post reports.

“Democrats increasingly worry that popular pieces of Biden’s agenda will hit a wall in the Senate, including his plans for climate change, immigration, gun control, voting rights and LGBT protections. Failing to enact them, they fear, could be a political disaster for Democrats as well as a substantive one.”

Texas Democrats warn that a crisis at the border could be weeks or even days away, the Houston Chronicle reports. The warnings come as the Biden administration moves to establish Ellis-Island-style rapid-processing hubs to release migrants into the U.S. within 72 hours.

Texas Gov. Greg Abbott (R), who claims without evidence that migrants expose Texans to the coronavirus, is stalling a federal offer to test them when they’re released from custody, CNN reports.

“Iran would be ready to resume talks on the nuclear deal with the US and other western powers if they provide a ‘clear signal’ that sanctions will be lifted within a year,” the Financial Times reports.

Rep. Eric Swalwell (D-CA) filed a lawsuit against former President Trump, Donald Trump Jr., Rudy Giuliani and Rep. Mo Brooks (R-SC) alleging that they and others are “responsible for the injury and destruction” of the Jan. 6 attack on the U.S. Capitol.

Axios: “The lawsuit adds to the mounting legal exposure Trump has found himself facing since leaving office.”

Employers added 379,000 jobs in February, adding fuel to renewed growth as the pandemic eases, the Wall Street Journal reports. The unemployment rate edged down to 6.2%.

“Consumers in the world’s largest economies amassed $2.9 trillion in extra savings during Covid-related lockdowns, a vast cash hoard that creates the potential for a powerful recovery from the pandemic recession,” Bloomberg reports.

“The July report, which examined the factors that led to the spread of the virus in nursing homes, focused only on residents who died inside long-term-care facilities, leaving out those who had died in hospitals after becoming sick in nursing homes. As a result, the report said 6,432 nursing-home residents had died—a significant undercount of the death toll attributed to the state’s most vulnerable population.”

New York Times: “The extraordinary intervention, which came just as Mr. Cuomo was starting to write a book on his pandemic achievements, was the earliest act yet known in what critics have called a monthslong effort by the governor and his aides to obscure the full scope of nursing home deaths.”

“Press secretary Caitlin Girouard and interim policy adviser Erin Hammond have left, the administration said on Friday. The two aides are the latest staffers to leave the governor’s office following the scandals, which have prompted bipartisan calls for him to resign.”

Politico: “Eager to find a winning culture war issue, former President Donald Trump and other GOP leaders are increasingly touting themselves as champions of women in sports by pushing back against President Joe Biden’s efforts to expand transgender rights.”

“The effort — which critics call transphobic and likely to backfire — extends from the roughly 20 Republican-controlled states where legislators are advancing bills to keep transgender women from participating in interscholastic sports, to Trump himself, who told attendees this past weekend at the Conservative Political Action Conference in Florida that it was ‘so important’ to ‘protect women’s sports.’”

“White House chief of staff Ron Klain is trying to avoid the pitfalls of the last Democratic administration with his approach to President Biden’s $1.9 trillion coronavirus relief package: Don’t spend months pursuing Republican votes and don’t wait to start selling it to the public,” the Wall Street Journal reports.

“Mr. Klain, a longtime adviser to Mr. Biden, watched the Obama administration struggle to gain public approval for its economic stimulus package and push for GOP votes for the Affordable Care Act… Now, he is advancing a White House strategy to engage Republicans while preparing to pass the president’s policies without their support.”

“He has also been a key messenger, appearing on cable shows and tweeting so much that some Republican aides on Capitol Hill said his feed has become a must-read.”

New York Times: “The average number of vaccine doses being administered across the United States per day topped two million for the first time on Wednesday… A month ago, the average was about 1.3 million.”

“President Joe Biden intends to work with Congress to repeal the war authorizations that have underpinned U.S. military operations across the globe for the past two decades and negotiate a new one that ends the open-ended nature of America’s foreign wars,” Politico reports.

New York Times: “The Biden foreign policy that emerges from these early weeks is one of restraint, caution and fast-paced deliberation. Decisions come more quickly than they did in the Obama administration, when Mr. Biden, as vice president, complained about the endless meetings.”

“Early evidence suggests that his judgments come with a harder edge than they did when he was one of many voices in the Situation Room, as indicated by Mr. Biden’s decision to cut off the American weapons that allowed the Saudis to prosecute the war in Yemen. It was President Barack Obama who first turned on that weapons spigot.”

Politico: “Over the past few weeks, Republicans have simmered over the ‘cancelation’ of seemingly innocent family favorites, including the venerated Mr. Potato Head toy and Dr. Seuss books. Glenn Beck has likened it to facism. Fox News has covered it obsessively. In recent days, conservative legislators have made speeches at confabs and in the halls of Congress, warning about what they describe as out of control PC culture.”

“And yet, even as it becomes all consuming on the right, White House advisers and Biden aides insist they’re unbothered by the culture-wars-du-jour. Unbothered, they say. They respond with a snore. (Okay, we’re done).”

Washington Post: “[Senator Lisa] Murkowski was the only Republican on the Senate Energy and Natural Resources Committee to approve Haaland (D-NM) in the narrow 11-to-9 vote. Haaland’s nomination now moves to the full Senate, where the entire Democratic caucus and two Republicans, Murkowski and Susan Collins (Maine), are expected to back her, cementing her confirmation.”

“The committee vote could easily have been a tie that would have complicated Haaland’s nomination. Her opposition to new leases for drilling oil and gas on federal land made her a target for Republicans on the committee.”

“Murkowski is unique, however, and so is her home of Alaska. The state is suffering economically, the pandemic has exacerbated the state’s woes, and she’s complained repeatedly that Biden’s less fossil fuel-friendly energy policies are hurting Alaskans. Moreover, her state changed its primary system recently to dilute the possibility of a conservative or Trump-inspired challenger, giving her room to legislate from the middle.”

Sen. Tom Cotton (R-AR) will slow down the confirmation of Merrick Garland to lead the Department of Justice, Politico reports.

“The hold that Cotton has placed on Garland’s nomination means that Senate Majority Leader Chuck Schumer will need to clear a procedural hurdle before a final confirmation vote. Democrats had hoped that Republicans would agree to skip that step, particularly given that several of them — including Minority Leader Mitch McConnell — plan to support the nominee.”

“But with Cotton blocking an agreement and the Senate’s focus on passing Biden’s coronavirus relief package, a final confirmation vote on Garland is expected to occur next week at the earliest.”

Politico: “[Merrick Garland’s] approach will not only determine his success in calming a department roiled under President Donald Trump, but will also influence a series of politically sensitive questions Garland faces, including deciding how aggressively to investigate Trump and overseeing the resolution of an ongoing probe into President Joe Biden’s son Hunter.”

“Reno was fiercely independent, but — in part for that reason — for many of those years she had a frosty relationship with Clinton, who saw Reno as adding to his administration’s political baggage. And during those times of Justice Department-White House tensions, Garland played a major role.”

Associated Press: “A federal probe into the overseas and business dealings of the former New York City mayor and close ally of former President Donald Trump stalled last year over a dispute over investigative tactics as Trump unsuccessfully sought reelection and amid Giuliani’s prominent role in subsequently disputing the results of the contest on Trump’s behalf.”

“But the U.S. attorney’s office in Manhattan has since returned to the question of bringing a criminal case against Giuliani, focusing at least in part on whether he broke U.S. lobbying laws by failing to register as a foreign agent related to his work.”

The federal investigation into Hunter Biden’s “tax affairs” is “active and ongoing,” two sources familiar with the status of the probe told Fox News.

And as President Biden vowed, the U.S. attorney’s office in Delaware “has not heard from the White House” or the president’s nominee for attorney general, Judge Merrick Garland.