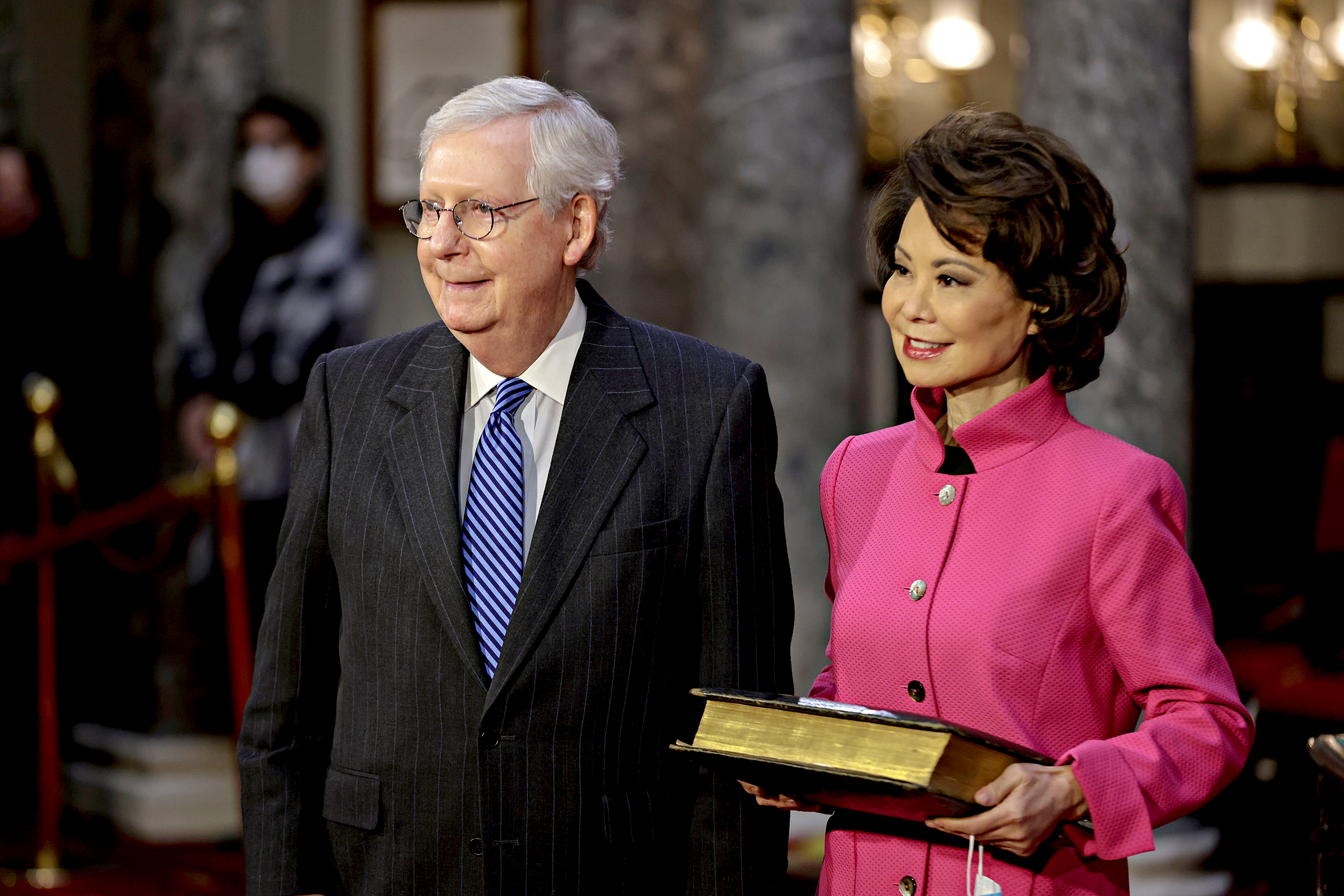 “The Transportation Department’s inspector general asked the Justice Department in December to consider a criminal investigation into what it said was Elaine Chao’s misuse of her office as transportation secretary in the Trump administration to help promote her family’s shipping business, which is run by her sister and has extensive business ties with China,” the New York Times reports.

“The inspector general said the Justice Department’s criminal and public integrity divisions both declined to take up the matter in the closing weeks of the Trump administration, even after the inspector general found repeated examples of Ms. Chao using her staff and her office to help benefit her family and their business operations and revealed that staff members at the agency had raised ethics concerns.”

“The bill’s voting provisions would guarantee no-excuse mail voting and at least 15 days of early voting for federal elections; require states to use their existing government records to automatically register citizens to vote; restore voting rights to felons who have completed their prison sentences; and mandate the use of paper ballots.”

“The House on Wednesday passed the George Floyd Justice in Policing Act, an expansive police reform measure named for the 46-year-old Black man who died last Memorial Day after a Minneapolis police officer pressed his knee against his neck for more than eight minutes,” the Washington Post reports.

“The bill passed 220-212 along mostly party lines with two Democrats voting against it and one Republican voting for it.”

Sen. Ron Johnson (R-WI) has told colleagues he will ask for a reading of entire coronavirus relief bill on the Senate floor, The Hill reports.

Senate Minority Whip John Thune (R-SD) estimates that will add 10 hours to the bill’s floor time, and will come on top of 20 hours of scheduled debate time.

“Senate Democrats are confident they can pass President Joe Biden’s $1.9 trillion coronavirus relief bill well before the official March 14 deadline. But Republicans are setting up a grueling debate that appears likely to carry the partisan battle into the weekend,” Politico reports.

“Republicans are planning to make life as excruciating as possible.”

“President Joe Biden and Democrats in Congress are jamming their agenda forward with a sense of urgency, an unapologetically partisan approach based on the calculation that it’s better to advance the giant COVID-19 rescue package and other priorities than waste time courting Republicans who may never compromise,” the AP reports.

“The coronavirus pandemic is driving the crush of legislative action, but so are the still-raw emotions from the U.S. Capitol siege and the hard lessons of the last time Democrats had the sweep of party control of Washington. Republicans are mounting blockades of Biden’s agenda just as they did during the devastating 2009 financial crisis with Barack Obama.”

Daily Kos has put together a spreadsheet updating where each Democratic U.S. Senator stands on eliminating the filibuster.  With Sen. Amy Klobuchar (D-MN) now in favor to move a voting rights reform bill, there are now just 8 Democrats in opposition.

“The White House is weighing whether to engage in talks with Republicans on a minimum wage hike once Congress passes its Covid relief bill,” Politico reports.

“White House aides said they believe there’s room to bring Republicans into the fold because raising the minimum wage is popular across ideological grounds. They pointed to the recent $15-an-hour wage increase passed in Florida, a state that voted for Donald Trump, as evidence that the issue has widespread support.”

“The White House is quietly working with Senate Democrats to ensure President Biden has a steady stream of nominees for the federal courts,” Axios reports.

Playbook: “We all knew Biden’s massive immigration proposal was DOA in the Senate. What we didn’t realize until now: Not even the House will try to pass it.”

Politico: “Biden’s proposal is a top priority for progressives and the Congressional Hispanic Caucus, who say it’s critical to take action in the early months of his term. But Democratic leaders aren’t going to put a bill on the floor that will fail — which puts them on a tightrope as they try to keep all factions of their diverse caucus on board for a realistic approach to one of Washington’s thorniest issues.”

“Fresh internal documents from the Department of Health and Human Services show how quickly the number of child migrants crossing the border is overwhelming the administration’s stretched resources,” Axios reports.

“The U.S. may be on the verge of another surge in coronavirus cases, despite weeks of good news,” Axios reports.

“Nationwide, progress against the virus has stalled. And some states are ditching their most important public safety measures even as their outbreaks are getting worse.”

“The U.S. averaged just under 65,000 new cases per day over the past week. That’s essentially unchanged from the week before, ending a six-week streak of double-digit improvements. Although the U.S. has been moving in the right direction, 65,000 cases per day is not a number that indicates the virus is under control. It’s the same caseload the U.S. was seeing last July, at the height of the summer surge in cases and deaths.”

Playbook: “There was a flurry of intrigue about Bernie [Sanders] on Tuesday night when Tanden’s nomination was pulled. It’s no secret that Sanders and Tanden have a fraught history. His staunchest supporters have long been her fiercest detractors, and Tanden’s meanest tweets have been barbs directed at Sanders going back to the bitter 2016 Democratic primary, when Tanden was a top aide to Hillary Clinton.”

“Three White House sources said that Sanders would have been a yes vote on Tanden if the White House had been able to find a Republican vote to replace Joe Manchin, the Democrat from West Virginia who started all of this by publicly opposing her Feb. 19.”

“But Bernie’s mittens are not clean. By withholding his support Sanders left Tanden twisting, fostered an atmosphere of a nominee in trouble and made it unlikely for any Republican to step forward in support. Why would a GOP senator break with her leadership unless she was certain she was providing the decisive vote?”

Regarding the relationship between Bernie and Biden, Politico reports that the two are working well together. “With Democrats navigating battles over labor rights and wage policy, the two have back-channeled, applauded each other, and crafted carefully worded statements designed to project peace and the aura of collaboration. It is, in part, a recognition that each side needs the other in order to be successful. It’s also driven by a desire to avoid the problems of the past.”

Assocaited Press: “The United States wasted billions of dollars in war-torn Afghanistan on buildings and vehicles that were either abandoned or destroyed, according to a report released Monday by a U.S. government watchdog.”

South Carolina senators voted to bring back the firing squad as a method of execution, the Columbia State reports.

“A bipartisan group of lawmakers voted in favor of the measure, which was proposed as an amendment to an execution bill that would make the electric chair the default method of execution.”

Wired: “When Twitter banned Donald Trump and a slew of other far-right users in January, many of them became digital refugees, migrating to sites like Parler and Gab to find a home that wouldn’t moderate their hate speech and disinformation. Days later, Parler was hacked, and then it was dropped by Amazon web hosting, knocking the site offline.”

“Now Gab, which inherited some of Parler’s displaced users, has been badly hacked too. An enormous trove of its contents has been stolen—including what appears to be passwords and private communications.”

“The founder of the far-right social media platform Gab said that the private account of former President Donald Trump was among the data stolen and publicly released by hackers who recently breached the site,” Ars Technica  reports.

The fourth said he couldn’t say whether the move was a good idea.

Nearly a dozen current and former staffers of Gov. Andrew Cuomo’s (D) told Gothamist/WNYC that the governor Cuomo “has cultivated an intense work culture that was brutal for some, traumatic for others.”

“We are withholding all of their names… because they fear professional or personal retaliation from the governor and his senior staff. Many still reside in New York where Cuomo’s reach extends far and wide.”

“A number of former Trump political appointees have still not received their lump-sum vacation payouts and required forms that are necessary to file for unemployment benefits as they face a tough job market in a Democratic Washington,” Politico reports. Said one former Commerce appointee: “I’m sitting here going, how do I pay my rent? How do I pay my cellphone bill?”

Cry me a river.

“As Donald Trump plotted his Conservative Political Action Conference appearance last week, and a broader, more-robust plan to return to politics as an omnipresent disruptor, one person was conspicuously absent from the confab,” CNN reports. “Jared Kushner, Trump’s son-in-law, was notably not on the list of advisers assisting the former President.” Said one adviser: “Right now, he’s just checked out of politics.”

Daily Beast: “Pro-Trump attorney Lin Wood has been banished from a private lawyer’s club in Atlanta after calling for former Vice President Mike Pence to face a firing squad. Wood, who was behind several failed courtroom attempts to overturn the presidential election for Trump, lost his membership in the Lawyers Club of Atlanta on Wednesday.”

CNN: “The New York City Bar Association added its name to the list of groups urging the state court committee that recommends whether to disbar attorneys to investigate complaints against Rudy Giuliani.”

“It’s the truth and I’m just going to say it. That I wish I never would have fucking met Trump. I wish it never would have happened. And it’s not the attacks I’ve been through. I’m so sick of fucking Donald Trump, man. God, I’m fucking sick of him. And I’m not doing this because, like, I’m kissing his fucking ass, you know. It’s, like, I’m sick of it.”  — Alex Jones, in a leaked video ranting in 2019 about then President Trump.