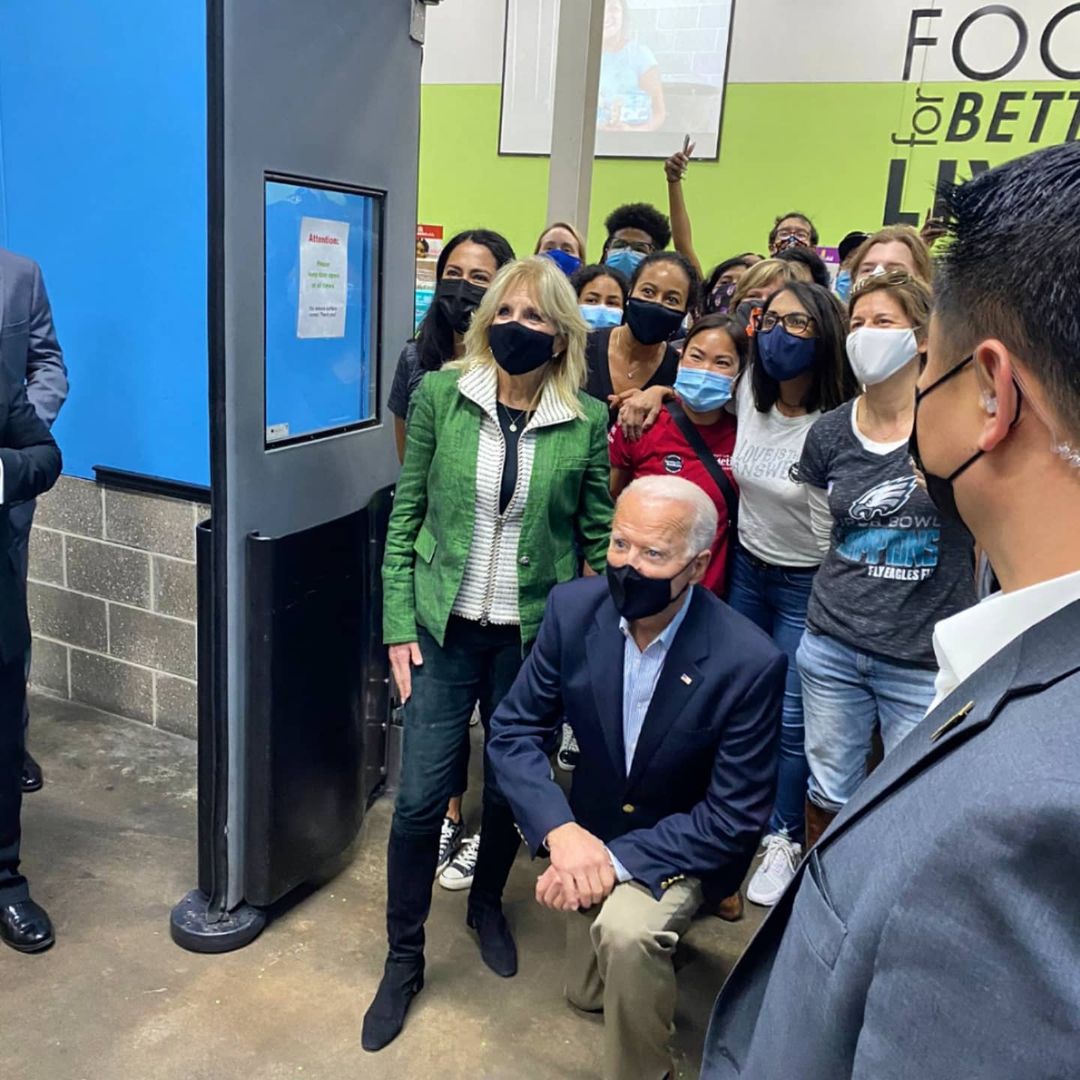 The Senate version of Biden’s COVID Relief plan would now phase out the $1,400 payments faster for higher-income individuals after moderate Senate Democrats pushed for more “targeted” spending, the Washington Post reports. Obviously, Biden and Schumer would only agree to this if certain moderate Democrats like Manchin or Sinema were threatening to vote no.

“Senate Majority Leader Chuck Schumer expressed confidence on Tuesday that President Biden’s $1.9 trillion coronavirus relief bill will pass in the Senate this week, saying the Senate will take up the legislation as early as Wednesday,” CBS News reports. Said Schumer: “We want to get the biggest, strongest, boldest bill that can pass. And that’s what we are working to do. We’ll have the votes we need to pass the bill.”

It’s unclear if he made this statement before or after he made the deal to tighten the benefit cutoff for higher incomes.

Bloomberg: “President Biden’s imperative of swiftly passing his $1.9 trillion pandemic-relief program faces one of its final hurdles: settling disputes among Senate Democrats over how to ensure aid gets to those who truly need it.”

Jonathan Bernstein: “Many pundits (and Republicans, when they’re not distracted by the Muppets and Mr. Potato Head and Dr. Seuss) have put a lot of emphasis on the decision Democrats have made to pass the bill through the reconciliation process, which allows a simple majority to avoid filibusters that can stymie legislation commanding fewer than 60 votes.”

“But there’s no real mystery here. Assuming that (barely) all of Majority Leader Chuck Schumer’s ducks are in a row, all 50 Democratic senators are ready to vote for the bill, and Vice President Kamala Harris has the tie-breaker to get the job done. Parties that have the votes rarely make concessions to get additional, unnecessary votes! Bipartisan compromise happens when it’s needed, not for its own sake.”

Punchbowl News: “Some Senate Republicans are warning that Democrats’ efforts to push the huge Covid package on a party line vote could ‘blow up the budget process’ and prevent a deal on next year’s appropriations bills.”

Sen. Lisa Murkowski (R-AK) said Tuesday evening she never told the White House she would vote against Neera Tanden, President Biden’s former nominee for White House budget director, and appeared surprised by the news that the nomination had been withdrawn, The Hill reports. Said Murkowski: “I never did, they never asked.”

Bullshit, Senator. What you did was declare that you wanted to meet Tanden because you were on the fence, and then you met with her, and then you were silent, and then you said you had more questions. This was obstruction on your part, and it was taken as such by the Biden Administration, who decided to move on. You are just upset that your hostage taking is now being seen as the direct reason the nomination was withdrawn. Tough.

Associated Press: “President Joe Biden’s Cabinet is taking shape at the slowest pace of any in modern history, with fewer than a dozen nominees for top posts confirmed more than a month into his tenure.”

“Among Biden’s 23 nominees with Cabinet rank, just 12 have been confirmed by the Senate, or about half. And among the 15 core nominees to lead federal agencies, 10 have been confirmed, or about two thirds. According to the Center for Presidential Transition, about a month into their first terms, the previous four presidents had 84% of their core Cabinet picks confirmed.”

“Joe Biden is tapping a federal agency to facilitate vaccinations for teachers and child care workers. He is using his bully pulpit to push states to get shots into teachers’ arms by the end of the month. The administration is even considering creating a ‘school reopening’ czar,” Politico reports.

“And newly-minted Education secretary Miguel Cardona will launch his tenure on Wednesday with a visit to elementary schools that have successfully reopened, in a high-profile event with First Lady Jill Biden.”

“House Democrats have reissued their subpoena to former President Donald Trump’s accounting firm for a trove of his financial records,” CBS News reports.

Politico: House fight for Trump’s financial records poised to stretch into the summer.

New York Gov. Andrew Cuomo (D) said that he will not resign despite growing bipartisan criticism over sexual harassment allegations leveled against him by three women. Said Cuomo: “I’m not going to resign.”

William Walker, commanding general of the D.C. National Guard, will testify that it took three hours and 19 minutes for the Pentagon to approve a request for National Guard assistance during the January 6 attack on the U.S. Capitol.

Associated Press: “The U.S. Capitol Police say they have intelligence showing there is a ‘possible plot’ by a militia group to breach the U.S. Capitol on Thursday. The revelation was detailed in a statement from the Capitol Police. It comes at the same time the acting police chief is testifying before a House subcommittee.”

The Trump Hotel in Washington, D.C. has tripled its room rates for tonight — in line with the latest QAnon conspiracy theory that March 4 will mark the second inauguration of Donald Trump, the Washingtonian reports.

Vox: The future of QAnon, explained by 8 experts.

Wall Street Journal: “Steve Bannon has asked a judge to dismiss a fraud indictment in New York because he was pardoned, setting up an unusual legal battle with the Manhattan federal prosecutors who say the clemency doesn’t extend to the grand jury’s determination that the former White House strategist committed a crime.”

New York Times: “For ambitious Republicans like Mr. Cotton who are mulling a presidential bid, a challenging and at times uncomfortable audition is underway this winter: trying to use the Trump political playbook to impress and inherit the former president’s supporters — all while navigating the limitation of not being Mr. Trump.”

“Some Republicans have been using appearances on Fox News and far-right news outlets to test messages and hone their political pitches, as well as firing off social media posts and delivering remarks at the Capitol to try to engage the right. Last weekend’s annual Conservative Political Action Conference in Orlando, Fla., where Mr. Cotton and other Republican leaders-in-waiting spoke, was the most visible stage yet for these politicians — not to mention where they confronted the most scrutiny.”

Politico: “Hugging Trump has become priority number one for most House Republicans, with feting the former president in Mar-a-Lago becoming a rite of passage among their leaders. GOP senators, by contrast, are trying to chart a different path forward — one built on policy rather than Trump’s personality — figuring that will make their party’s brand more effective than attaching itself to one man. Don’t expect Mitch McConnell to show up in Florida any time soon.”

Jonathan Bernstein: “I’ve seen a number of perfectly fine articles about why and how former President Donald Trump still wields influence over the Republican Party, but c’mon! The main reason that Republican politicians feel stuck with Trump is that they know that he’s capable of turning against their party at the drop of a hat.”

“No, what’s different about Trump is that unlike any other former president — really, any former nominee — in living memory, it’s that easy to picture him telling his voters to stay home and handing elections to the other party. And that’s why he’s been an impossible dilemma for Republican politicians ever since he emerged as a major candidate in 2015.”

“The Department of Defense inspector general has issued a scathing review of Rep. Ronny Jackson (R-TX) during his time serving as the top White House physician, concluding that he made ‘sexual and denigrating’ comments about a female subordinate, violated the policy for drinking alcohol while on a presidential trip and took prescription-strength sleeping medication that prompted concerns from his colleagues about his ability to provide proper care,” CNN reports.

“Jackson claimed the report was politically motivated in a statement to CNN on Tuesday, saying the inspector general ‘resurrected’ old allegations against him because he refused to ‘turn my back on President Trump.’”

President Biden on Wednesday criticized the governors of Texas and Mississippi for ending mask mandates and rolling back other coronavirus restrictions, saying “the last thing we need is Neanderthal thinking,” the Washington Post reports.

“New satellite imagery obtained by CNN reveals North Korea has recently taken steps to conceal a facility US intelligence agencies believe is being used to store nuclear weapons, a move that could add to the growing sense of urgency from critics who argue the Biden administration needs to articulate a clear strategy on how it will deal with Kim Jong Un going forward.”

“All four believe a nuclear Iran would be a major threat and have been eyeing the Biden administration’s plan to rejoin the 2015 nuclear deal with concern.”

Janan Ganesh: “The pandemic has crystallized a thought for which there was once only scattered evidence. But at some point in this century, the US became a mildly social democratic country, in its attitudes if not the reality of its welfare state. It is the knottiness of the country’s lawmaking — the counter-majoritarian Senate, above all — that stops the one translating to the other, not some deep folk aversion to ‘socialism’ or the European way.”

“In their preferences, to be clear, Americans are hardly Danes. The reduction of inequality is well down their list of desires. Their tax tolerance is lower. But even as 40 percent reliably vote Republican, they do not inhabit the party’s vision of an eternal frontier of rugged self-reliance. If the US was once ideologically exceptional within the rich world, it is now just different in degrees.”