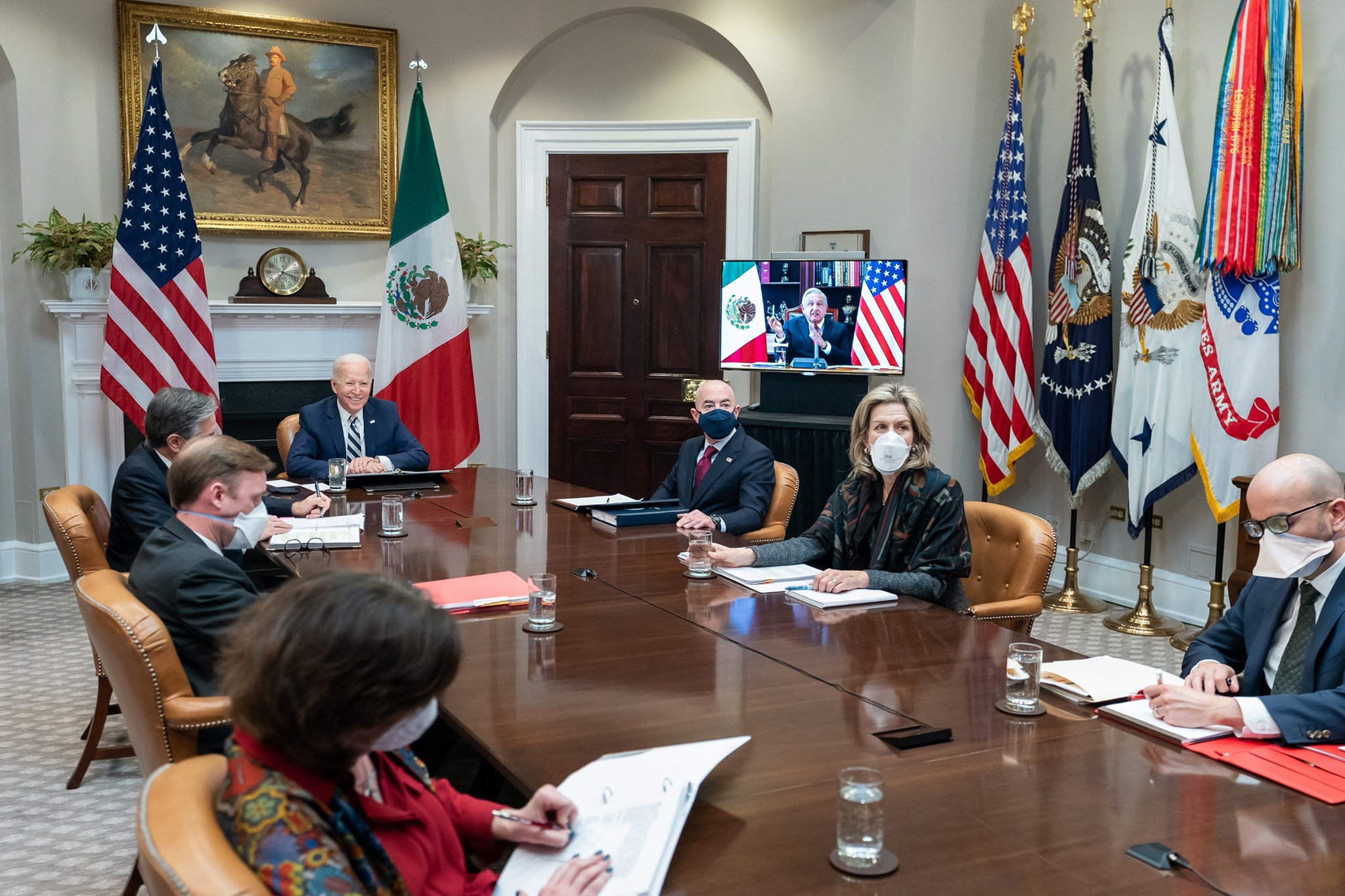 President Joe Biden said he expects the United States will have enough Covid-19 vaccine for every adult Americans by end of May — two months earlier than anticipated, the Washington Post reports.

Biden also wants all states to vaccinate, with at least one shot, all teachers, childcare workers and school staff by the end of this month.

“House Democrats are pursuing an ambitious agenda to approve several progressive bills supported by President Biden in the coming weeks, but these measures face an uncertain future in the evenly divided Senate, where most legislation will require support from Republicans to advance,” CBS News reports.

“Several of these measures have previously passed in the House but stalled in the Senate, as then-Majority Leader Mitch McConnell refused to bring them to the floor for consideration. Speaker Nancy Pelosi had referred to McConnell as the ‘grim reaper,’ overseeing the ‘legislative graveyard’ of the Senate. However, even with Democrats now nominally in control of the Senate, many of these bills still face an uncertain future.”

New York Times: “Unless the parties can agree on how to fund an infrastructure plan, Mr. Biden might have to try to push through another sprawling spending package with only Democratic votes. The task could prove exceptionally difficult given the competing pressures the president will face from centrists and progressives in his party — and the absence of a pandemic emergency to help fuse those factions in support of the bill.”

“Biden administration officials have not decided whether to push infrastructure as a stand-alone bill or as part of a broader package. But any hopes of bringing Democrats and Republicans together on a program are almost sure to be undermined by the same disagreements that have felled previous attempts.”

Texas Gov. Greg Abbott (R) announced  that he will end his state’s coronavirus restrictions next week with an upcoming executive order.

New York Gov. Andrew Cuomo (D) angered Joe Biden’s campaign in 2020 over his speech at the Democratic National Convention, “which aides considered to be self-aggrandizing,” The Hill reports. According to Lucky: How Joe Biden Barely Won the Presidency, Cuomo “did not deliver his recording of his speech until the day he was set to appear and used much of his remarks to tout his response to the coronavirus pandemic rather than praise Biden.”

Said one Biden aide: “They put his speech on our doorstep, lit it on fire, rang the doorbell, and then ran away.”

“When a team of outside investigators begins to examine sexual harassment allegations lodged against Gov. Andrew Cuomo, its scope may be far broader than first anticipated,” the New York Times reports.

“The team, which will be hired by Letitia James, the New York State attorney general, will have far-reaching subpoena powers to request troves of documents and compel witnesses, including the governor, to testify under oath.”

Insider: Impeachment is “almost unprecedented” in New York, but calls for Cuomo to resign are growing among Democrats.

First Read: “For one thing, there hasn’t been a cascade of calls for Cuomo to resign; so far, just one New York congresswoman, Kathleen Rice, has called for Cuomo’s resignation. (Notably, Sen. Kirsten Gillibrand wants the matter investigated first.)”

“In addition, unlike with Franken in 2017, Democrats are under less pressure to claim the political high ground and make an obvious contrast against a current congressional candidate (Roy Moore in Alabama) or a current president (Donald Trump).”

“And Cuomo has never been someone willing to walk away, even when facing a crisis that’s become impossible to control.”

“But Democrats need to be asked this question after the latest allegation against Cuomo: How could you call for — or accept — Al Franken’s resignation, but not do the same for Cuomo?”

Responded Wray: “We have not to date seen any evidence of anarchist violent extremists or people subscribing to antifa in connection with the 6th.”

CNBC: “In the latest stimulus package making its way through Congress, there’s no extension of the national ban on evictions that is set to expire this month, meaning millions of Americans could be at risk of losing their homes as the Covid-19 pandemic still rages.”

“President Joe Biden had called on Congress to keep the eviction moratorium in effect through September. However, because Democrats have decided to pass the legislation through a process called budget reconciliation, they can’t include the eviction ban in the relief bill.”

Associated Press: “With the U.S. vaccination drive picking up speed and a third formula on the way, states eager to reopen for business are easing coronavirus restrictions despite warnings from health experts that the outbreak is far from over and that moving too quickly could prolong the misery.”

Associated Press: “The U.S. vaccine campaign has heightened tensions between rural and urban America, where from Oregon to Tennessee to upstate New York complaints are surfacing of a real — or perceived — inequity in vaccine allocation.”

“In some cases, recriminations over how scarce vaccines are distributed have taken on partisan tones, with rural Republican lawmakers in Democrat-led states complaining of ‘picking winners and losers,’ and urbanites traveling hours to rural GOP-leaning communities to score COVID-19 shots when there are none in their city.”

Wall Street Journal: “The oil industry’s top lobbying group is preparing to endorse setting a price on carbon emissions in what would be the strongest signal yet that oil and gas producers are ready to accept government efforts to confront climate change.”

The White House plans to withdraw the nomination of Neera Tanden as director of the Office of Management and Budget as early as Tuesday evening, the Washington Post reports.

Tanden is still expected to get a White House position that does not require Senate confirmation.

Vox looks at a Supreme Court case which could “end all race-conscious admissions programs altogether.”

“The Harvard case is the first major affirmative action suit to reach the Supreme Court since Republicans gained a 6-3 majority on that Court, and it’s the first such case to reach the justices since Anthony Kennedy’s retirement in 2018. Kennedy had unexpectedly cast the key vote to uphold an affirmative action program in Fisher v. University of Texas at Austin in 2016.”

“The Tennessee Senate voted 27-6 Monday night to approve a bill that would effectively ban transgender student athletes from participating in middle and high school sports under their gender identity,” the Tennessean reports.

“A Republican attorney defending Arizona’s voting restrictions in front of the Supreme Court told justices Tuesday that the GOP was defending the measures because they disadvantage Democrats,” NBC News reports.

“The Supreme Court is hearing arguments over Arizona voting restrictions in a pair of consolidated cases challenging a state law banning ballot collection and a policy that tosses ballots cast in the wrong precinct. Democrats have sued, saying the rules discriminate against minorities and violate Section 2 of the Voting Rights Act.”

The Washington Post and the New York Times report that justices “seemed inclined” to allow the voting restrictions.

Arizona state Sen. Wendy Rogers (R) “is under fire after a damning report confirmed she harassed a former aide by fat-shaming him, making comments about his lesbian sister, and demanding he work while sick with Covid-19,” the Daily Beast reports. The report “included text messages and an eyewitness account” to corroborate the claims that Rogers “cultivated a hostile work environment.”

The Office of Congressional Ethics concluded in a report that there is “substantial” evidence that Rep. Steven Palazzo (R-MS) misused campaign as well as official funds and used his office to help his brother in violation of House rules, The Hill reports.

“Turnover isn’t uncommon on Capitol Hill, especially for a new lawmaker, but this level of churn this early in a congressional career is quite notable, and it’s very strange.”

But this is even stranger: “On Feb. 10, Christian Dillard, the former spokesperson for Van Dyune’s campaign and a longtime acquaintance of the congresswoman, shot and killed himself outside Van Duyne’s home. Van Duyne was home at the time of the incident.”

“Fulton County prosecutors are expected to appear before a grand jury this week seeking subpoenas for documents and witnesses related to their investigation of former President Donald Trump and some of his top associates for possible election fraud,” the Atlanta Journal-Constitution reports.

“Legal experts are split as to whether there’s a strong case to be made, but most agree Trump’s efforts to overturn Georgia’s election results merit greater scrutiny.”

“State prosecutors in Manhattan who are investigating former President Donald Trump and his family business are sharpening their focus on the company’s long-serving chief financial officer, asking witnesses questions about his dealings at the company,” the New York Times reports.

“The increased focus on the executive, Allen Weisselberg, could step up pressure on him to cooperate with the investigation if the prosecutors unearth evidence of wrongdoing on his part. He has served as the Trump Organization’s financial gatekeeper for more than two decades and could be a vital source of information for the government about the inner workings of the company.”

New York Times: “As it turns out, new data shows that a year after the pandemic wrought economic devastation around the country, forcing states to revise their revenue forecasts and prepare for the worst, for many the worst didn’t come. One big reason: $600-a-week federal supplements that allowed people to keep spending — and states to keep collecting sales tax revenue — even when they were jobless, along with the usual state unemployment benefits.”

“By some measures, the states ended up collecting nearly as much revenue in 2020 as they did in 2019.”