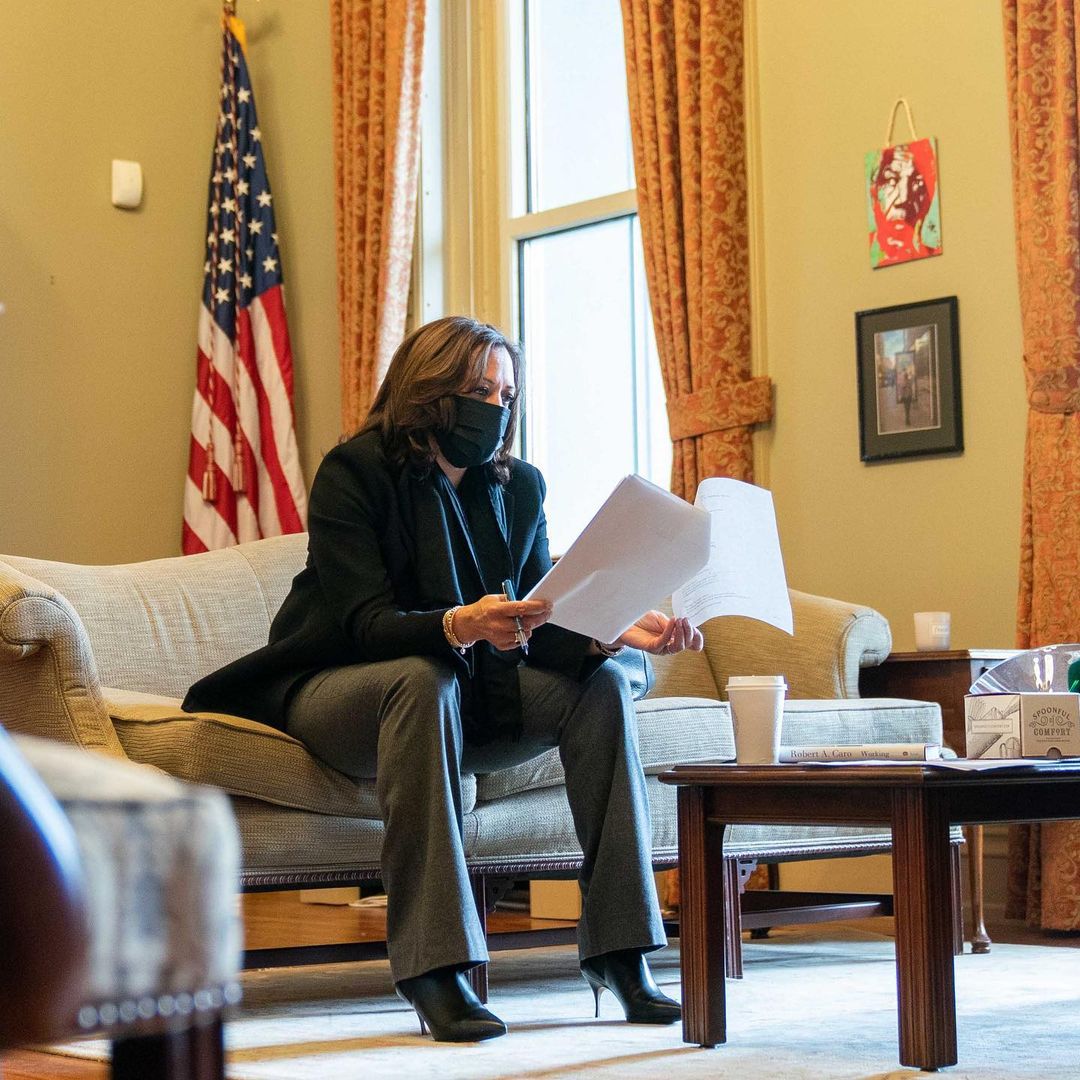 Although Sen. Joe Manchin (D-WV) says he doesn’t support a federal minimum wage hike to $15 an hour, a new poll suggests that 63% of West Virginians support raising the minimum wage to that level by 2025.

TEXAS 6TH CD — The filing deadline is today. Former Trump aide Katrina Pierson announced she will not run for this seat after signaling all last week that she would. Typical. Republican Brian Harrison, who served as chief of staff to former Trump Health and Human Services chief Alex Azar during his disastrous handling of the COVID pandemic, announced Monday that he could compete in the May 1 special election to succeed the late GOP Rep. Ron Wright. Politico wrote last month of the now-candidate, “In the West Wing, a handful of his detractors derisively referred to Harrison as ‘the dog breeder’—a reference to the labradoodle-breeding family business that he helped run prior to joining the Trump administration.” More on that here.

NEW YORK GOVERNOR — Democratic Gov. Andrew Cuomo will face an independent investigation into charges that he sexually harassed female members of his staff after a second aide, former health policy staffer Charlotte Bennett, accused him of repeatedly asking her invasive and unwanted questions about her sex life. Following Bennet’s allegations, a third woman, Anna Ruch, said on Monday that Cuomo made an unsought advance on her at a wedding, grabbing her face and asking if he could kiss her before she was able to pull away.

While a number of prominent Democrats have said Cuomo should resign if James’ investigation inculpates him, a growing chorus has called for him to leave office immediately. A telling example came from Rep. Kathleen Rice, who tweeted, “The Governor must resign” shortly after the Times published Ruch’s story. In 2010, Rice was Cuomo’s preferred candidate to succeed him as attorney general, though she lost the Democratic primary to Eric Schneiderman.

If Cuomo were to leave office early, he would be succeeded by Lt. Gov. Kathy Hochul, a former congresswoman who is serving her second term as Cuomo’s number two.

NORTH CAROLINA 11TH CD — In a new report from BuzzFeed, two more women, Caitlin Coulter and Leah Petree, have publicly accused freshman Republican Rep. Madison Cawthorn of sexually harassing them while they attended Patrick Henry College in 2016 and 2017. Previously, three women (including two by name) came forward in the summer of 2020 to charge Cawthorn with similar acts both before and during his time at Patrick Henry.

Several other students also told BuzzFeed that Cawthorn had developed a reputation for predatory behavior despite his brief enrollment at the school (he was there for just over a semester), and two dorm leaders also confirmed that they’d warned women about him.

NEW JERSEY 2ND CD — Democratic Assemblyman Vince Mazzeo has announced he’ll run for a competitive state Senate seat that’s open this fall due to a Republican retirement, which probably takes him out of the running for a challenge to Republican Rep. Jeff Van Drew. Win or lose in November, it’d be unlikely that Mazzeo would want to immediately turn around and run another tough race.

WYOMING AT LARGE CD — State Rep. Chuck Gray just filed paperwork with the FEC ahead of a possible primary challenge to Republican Rep. Liz Cheney, though he has yet to speak publicly about his interest. Gray’s name surfaced last month when a poll for Donald Trump’s super PAC included him. His Twitter bio only describes him as a member of the legislature, not a congressional candidate, though his feed is mostly filled with attacks on Cheney. Another GOP lawmaker, state Sen. Anthony Bouchard, is already running.

OHIO 16TH CD — With the support of his old boss, former Donald Trump aide Max Miller has entered the GOP primary against Rep. Anthony Gonzalez, who was one of 10 House Republican who voted to impeach Trump in January. Miller, a Marine Corps reservist, hails from a family of prominent Jewish philanthropists in the Cleveland neighborhood of Shaker Heights but only recently moved into Gonzalez’s 16th District, which lies to the west, south, and east of the area where Miller grew up (yes, it’s that hideously gerrymandered).

The announcement makes Miller the first notable Republican to join the race, but former state Rep. Christina Hagan has also hinted at her interest. However, she’s said she might instead choose to seek Democratic Rep. Tim Ryan’s 13th District, depending on how redistricting turns out.

Perry Bacon Jr.:  “Voters may like a president’s policies in the abstract but still think he isn’t doing a good job or that his policies aren’t that effective if those policies aren’t bipartisan. Think of this as the Mitch McConnell theory.”

MASSACHUSETTS GOVERNOR — Democrat Joe Curtatone announced on Monday that he would not seek a sixth term this fall as mayor of Somerville, a city of 81,000 located just north of Boston, and he once again did not rule out a bid for governor in 2022. Curtatone said his decision was not a “political calculus to a calendar or timeline,” adding, “I’m not even thinking about what I may or may want to do.”

Back in December, the conservative Boston Herald reported that Curtatone was mulling over a bid against Republican Gov. Charlie Baker, who has not yet revealed his own plans. While Curtatone still hasn’t publicly expressed interest, though, one of his longtime advisors did say the mayor was thinking about it. Consultant Mark Horan, who acknowledged that it would have been “extremely difficult” for Curtatone to seek a promotion while also running for re-election, said of a potential gubernatorial run, “It certainly makes sense that he is considering it.”

GEORGIA U.S. SENATOR — The Atlanta Journal-Constitution adds a couple more Republican names to the pile of potential Georgia Senate candidates: former Rep. Jack Kingston, who very narrowly lost the 2014 GOP primary to now-former Sen. David Perdue, and state Sen. Burt Jones, an extremist Trump supporter who was booted as chair of a key committee by fellow Republicans for leading an effort to overturn last year’s election results. There’s no word on Kingston’s level of interest, but Bluestein reports that the wealthy Jones is “keeping his options open.”

Atlanta Journal-Constitution: “No longer is the state’s political gravity squarely in sparsely populated South Georgia, as it was throughout decades of Democratic rule in the 20th century, or centered in the conservative bastions of North Georgia that dominated the state GOP through most of the 2010s.”

“Now, Atlanta and its suburbs have increasingly become the center of state politics, home to a burgeoning left-leaning electorate that fueled Democratic wins in November and January and the rise of homegrown politicians such as Stacey Abrams, Keisha Lance Bottoms and Jon Ossoff while also harboring a growing number of influential Republicans.”

ALABAMA U.S. SENATOR / GOVERNOR / LT. GOVERNOR — Current Lt. Governor Will Ainsworth, whose name had come up as a possible candidate for Alabama’s open Senate seat, announced on Friday that he would not join the GOP primary. However, while Ainsworth did not mention next year’s race for governor, he did say in a statement that he believes “that God’s plan currently calls for me to continue leading on the state, not federal, level of government”—a hint that he could instead run for that post. The current incumbent, Republican Kay Ivey, could seek another term but hasn’t yet announced her plans and may, at age 76, opt to retire.

“A six-month delay holding up the data that states use to draw their legislative districts is mangling plans for the 2022 elections, as states discuss postponing primaries and navigating legal deadlines for redistricting that some are now almost certain to miss,” Politico reports.

“At least nine states have constitutional or statutory deadlines to redraw their maps, according to the National Conference of State Legislatures, that won’t mesh with such a profound delay in the data delivery. Election officials in some states, such as North Carolina, have recommended moving back early primary dates to make more time for drawing new districts. And both political parties will have to grapple with how to recruit candidates to run for districts that may not exist until just before election season begins.”

MICHIGAN GOVERNOR — The AP reports that unnamed Republican politicos say that businesswoman Lena Epstein could try to challenge Democratic Gov. Gretchen Whitmer next year. Epstein lost an open race for Michigan’s 11th District in 2018 to Democrat Haley Stevens, who defeated her 52-46 to pick up the seat for Democrats amid that year’s blue wave.

KANSAS U.S. SENATOR — Donald Trump just endorsed—not by tweet, of course, but by press release—Republican Sen. Jerry Moran’s bid for a third term next year, which may foreclose any intra-party challenges. Perhaps the person who will be most disappointed by this turn of events, according to the Kansas City Star, is CPAC organizer and election truther Matt Schlapp, who “was seen as a potential primary challenger.” Schlapp, who considered a Senate bid last cycle but ultimately declined, “did not respond to a text message asking for his reaction.” It’s classic Trump. Schlapp has felated Trump at every opportunity, and Trump shows no loyalty.

Washington Post: “Kinzinger, who has already started a leadership PAC to directly support GOP candidates who have gone up against Trump, is expected to appear at fundraising events for the super PAC Americans Keeping Country First.”

“Founders of the group, which include Kinzinger advisers, are also launching a sister nonprofit to ‘build a grass roots army,’ according to documents reviewed by The Washington Post. Unlike traditional PACs, both organizations can accept unlimited contributions. Nonprofit groups are not required to disclose the identity of their contributors.”

“A new centrist political party is gaining steam, but records show it’s being largely financed by a single man: a former Philip Morris executive who helped steer the company through the tobacco wars of the 1990s,” Axios reports.

“The Serve America Movement is running candidates in a handful of states, banking on the appeal of a non-ideological party. The outsized financial influence of donor Charles W. Wall underscores the challenge of overcoming extreme partisan rancor with a process-focused political movement.”