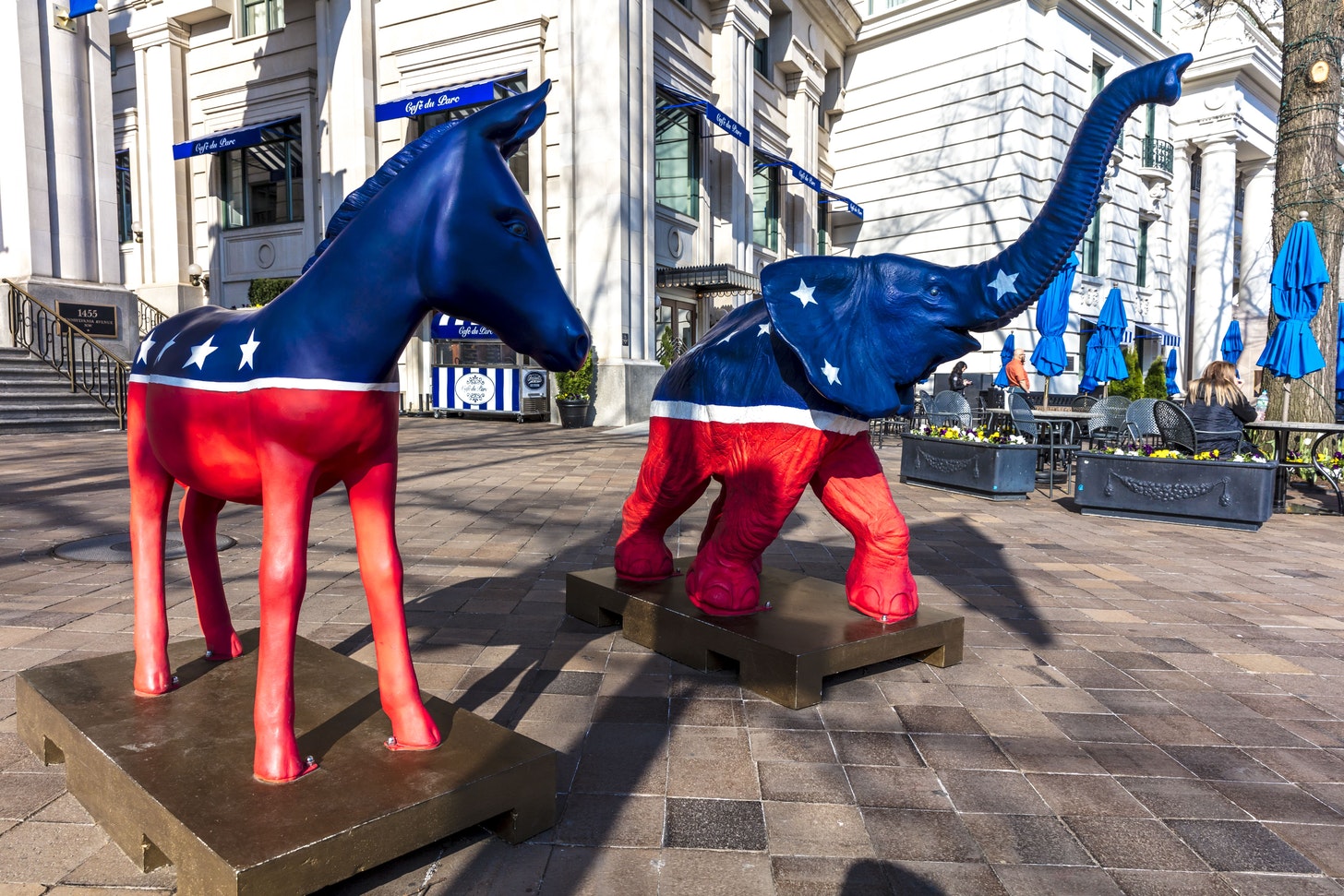 In his first public speech since leaving office, former President Trump told the audience at the Conservative Political Action Conference that he would not start a third party because “we have the Republican Party,” Axios reports.

Trump also predicted President Biden would “lose the White House decisively four years from now,” and suggested he might run against him in 2024.

Trump then repeated the false claim that he won the 2020 election: “Actually, as you know, they just lost the White House. Who knows, I may even decide to beat them for a third time, okay?

Former President Donald Trump won the Conservative Political Action Conference straw poll on Sunday, with 55% of respondents saying they would vote for him in a hypothetical 2024 primary, The Hill reports.

New York Times: “But in a surprise bit of downbeat news for Mr. Trump, only 68% of those at the conference said they wanted the former president to run again in 2024.”

Washington Post: “Over meals and many Diet Cokes, Trump has already started building his post-White House political operation and cementing his role as the party’s de facto leader. He has begun to formalize a structure of political advisers around him and made plans to start a new super PAC — capable of raising donations of any size — to support candidates he favors. His team is looking to formalize a process for vetting endorsement prospects, assessing what candidates have said and done for Trump in the past.”

“He has also discussed drafting a new ‘America First’ agenda — like the 1994 ‘Contract with America,’ but focused on issues such as border security and trade — to steer the party’s direction.”

Sen. Bill Cassidy (R-LA) predicted that former President Donald Trump “would not be the party’s nominee for president in 2024, pointing to the number of seats lost by Republicans in the House and Senate over the four years Trump was in office,” The Hill reports.

Said Cassidy: “That’s a theoretical that I don’t think will come to pass. I don’t mean to duck, but the truth is you could ask me about a lot of people, if they are fit. Point is, I don’t think he’ll be our nominee.”

Politico: “Traditionally, state legislators and political mapmakers rely heavily on recent election results for clues about how communities will vote in the future — baselines they use to gerrymander advantageous districts for their party. But the whiplash in Trump-era elections make drawing conclusions from those results more complicated this year.”

“And both parties’ strategists know that if they make bad bets, drawing districts based on elections that were driven more by Trump’s singular personality than by trends that will persist until 2030, those mistakes could swing control of the House against them over the next decade.”

Scott replied that the GOP is “the voters’ party” and “always has been.”

House Minority Leader Kevin McCarthy (R-CA) on Saturday declared a Republican takeover of the House majority a sure bet in 2022, the Washington Times reports.   Said McCarthy: “I will bet my house … my personal house.”  He said there was “not a chance” they lose in 2022.

Washington Examiner: “Within the sunny confines of the Conservative Political Action Conference, it’s as if former President Donald Trump did not fail to win reelection in November. He is simply not the president right now.”

“It has been nearly four weeks since President Biden evicted Trump from the White House. Prominent Republicans who addressed conservative activists Friday at CPAC acknowledged as much, delivering a series of stirring calls to action to oppose the Democratic agenda in Washington, D.C. But missing from the program was any reassessment of Trump’s defeat and any role he played in the loss the GOP’s majority in the Senate in two subsequent runoff elections in Georgia.”

“Gathering at the first major conference of pro-Trump conservatives since his defeat, the politicians and activists sought to affirm their adherence to a conservatism as defined by Mr. Trump, and the need to break with many of the policies and ideas that had animated the American right for decades.”

“One month after Donald Trump left office, thousands of his conservative allies and other far-right leaders on Friday began trying to center the Republican Party around the grievances of his presidency, pushing false claims about the American voting system, denouncing what they called liberal cancel culture and mocking mask-wearing,” the New York Times reports.

Donald Trump Jr. told Fox News that there are “plenty” of Republican lawmakers who should get primary challengers.

Said Trump: “I don’t think we have to blindly support, you know, establishment candidates that don’t do anything. I think that’s a mistake and I think we’ve seen too much of that from the establishment where they blindly throw cash, time, money and energy to help failing candidates who have no charisma, no personality, no political chops, get over the line simply because they’ve been there a few years.”

He added: “That’s the kind of nonsense that has to go, and I think it will.”

NEW YORK GOVERNOR — “As Gov. Andrew Cuomo confronts one of the most seemingly perilous moments in his decade as governor, private conversations are beginning to unfold about what it would take to mount a viable challenge against him next year, and who might be best positioned to take him on,” the New York Times reports.

“Progressive activists and operatives are trading a flurry of texts, calls and tweets, glued to each fresh controversy unfolding around the governor, and speculating about what the political landscape would look like if he ultimately does not seek a fourth term in 2022. He and his team have said that he intends to run.”

Sen. Rick Scott (R-FL), who heads the Senate Republicans’ campaign committee, told the Wall Street Journal that he did not ask Donald Trump to refrain from endorsing primary challengers to GOP incumbents the former president regards as disloyal.

Said Scott: “Many are saying it is my job to mediate between warring factions on the right and mediate the war of words between party leaders… Well, I have news for them—I’m not going to mediate anything.”