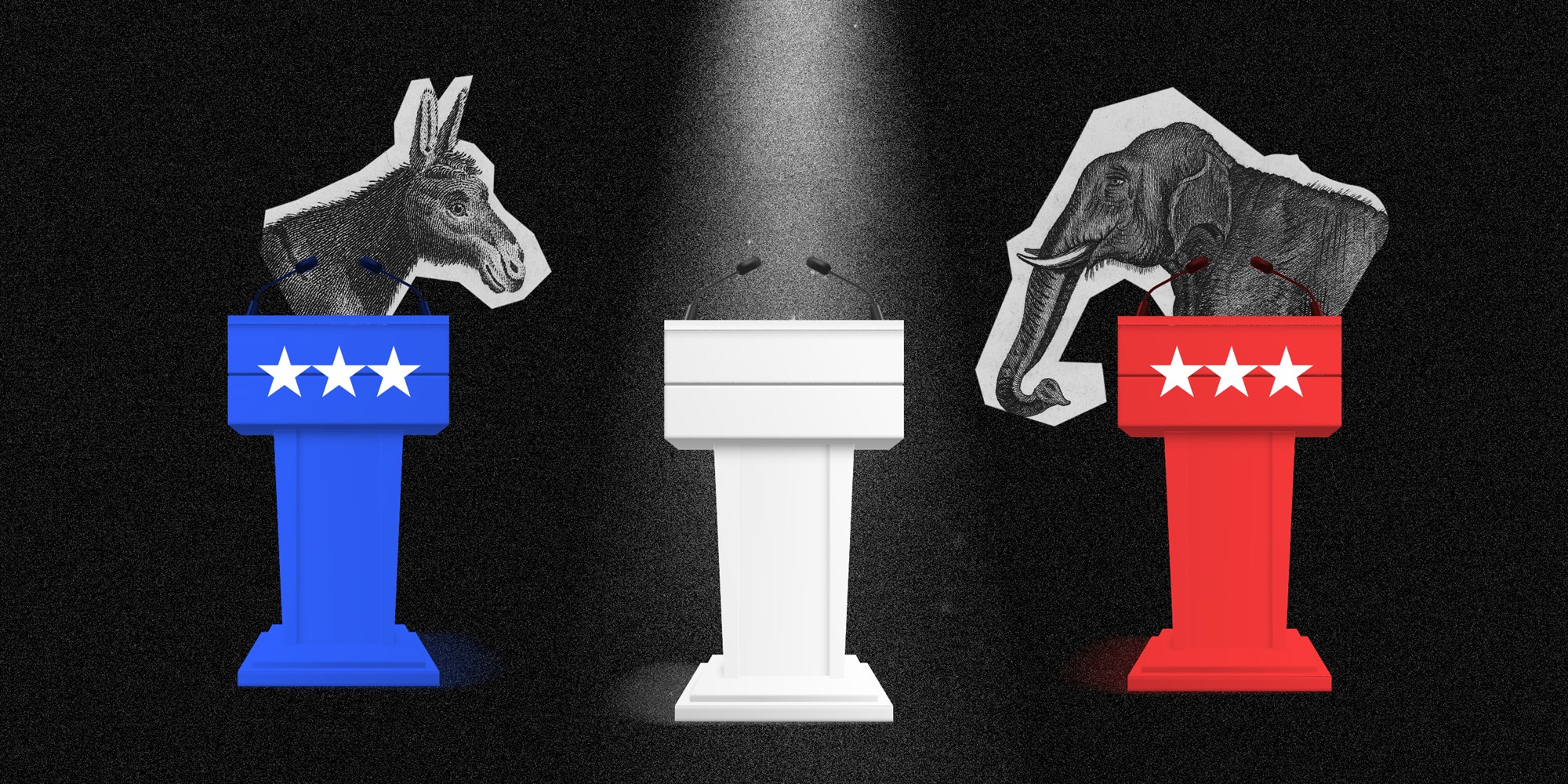 Associated Press: “Angered by a blitz of Republican-backed legislation that would roll back voting access, Georgia Democrats are taking hostages — withholding their support on pieces of legislation that need bipartisan backing to pass.”

“The first potential casualty appears to be a House bill that would legalize online sports betting. The bill was set to receive a vote on the House floor Thursday but was pulled at the last minute.”

“Conversations with House Democrats revealed the reason why the bill didn’t get a vote: They withdrew support because of GOP efforts to enact restrictive voting laws.”

PENNSYLVANIA U.S. SENATOR — Democratic state Sen. Sharif Street said Tuesday that he’d be forming an exploratory committee in April for a possible bid for this open seat, though he added that he wouldn’t be making a decision until later this year. Street, who would be the state’s first Black U.S. senator, is the son of former Philadelphia Mayor John Street, who served from 2000 to 2008.

A spokesperson for former Ambassador to Denmark Carla Sands confirmed to The Hill this week that Sands is indeed considering seeking the Republican nomination for this open Senate seat. Sands, whom Politico described as “a former socialite, B-list movie star and chiropractor,” was a major Trump donor who managed to draw the wrong type of attention both during and after her time as ambassador.

In 2019, Sands banned a NATO expert named Stanley Sloan from an event celebrating the alliance’s 70th anniversary for what Sloan characterized as his “critical evaluation of Trump’s impact on transatlantic relations.” This month, the Office of Special Counsel also concluded that Sands had broken federal law for using her official Twitter account to solicit donations for Trump’s 2020 campaign, spread racist conspiracy theories about Kamala Harris’ eligibility to serve as vice president, and attack Joe Biden.

NEVADA 3RD CD — Attorney April Becker announced this week that she would seek the Republican nomination against Democratic Rep. Susie Lee in this competitive seat in the Las Vegas suburbs.

Becker ran for the state Senate last year and lost a close fight against the Democratic incumbent, Majority Leader Nicole Cannizzaro, by a 50.5-49.5 margin. Becker then tried to challenge her 631-vote loss in court and demanded a “revote,” but she failed to get what she wanted. Only about 4% of the Senate seat she sought in 2020 overlaps with Lee’s district, so there may not be many people who supported her last year who could vote for her in 2022.

Lee’s seat, which includes the southern Las Vegas suburbs, has been very swingy turf for years: According to new data from Daily Kos Elections, the 3rd District went from 48-47 Trump to 49.1-48.9 Biden as Lee was winning her second term 49-46. Unlike their colleagues in many other states, though, Nevada Democrats are considerably better positioned for redistricting than they were 10 years ago, and Team Blue could try to give Lee a more favorable seat.

OHIO U.S. SENATOR — Former Republican state party chair Jane Timken received an endorsement this week from Rep. Bob Gibbs, who is the first member of Congress to take sides in the primary for this open seat.

LOUISIANA 2ND CD — Democratic state Sen. Troy Carter received a cross-party endorsement this week from a prominent Republican in the New Orleans suburbs, Jefferson Parish President Cynthia Lee Sheng, ahead of the March 20 all-party primary. This seat backed Joe Biden by a hefty 75-23, but Sheng’s support could help Carter win over Republican voters who don’t have a strong candidate to choose from; Sheng’s backing could be especially important in the event that Carter advances to an April runoff with another Democrat.

Carter also earned the backing of fellow Democratic state Sen. Cleo Fields, a longtime political force in Baton Rouge at the other side of the district. Fields represented Louisiana’s capital city in Congress from 1993 to 1997 and ran for governor in 1995.

NEW HAMPSHIRE U.S. SENATOR — Retired Army Brig. Gen. Don Bolduc, who came up short in last year’s Republican primary, insists that he won’t abandon his second bid for Senate even if Gov. Chris Sununu, the favorite choice of GOP leaders, enters the race. While Sununu recently said he won’t decide any sooner than this summer, if he did eventually get in, his name recognition, popularity, and fundraising ability would sorely test Bolduc’s pledge.

Meanwhile, a new poll from the University of New Hampshire finds Sununu narrowly edging out Democratic Sen. Maggie Hassan 48-46, while Hassan leads former Sen. Kelly Ayotte (whom she ousted in 2016) 48-43, crushes Bolduc 52-39, and obliterates former Trump advisor Corey Lewandowski 53-34. Of this group, only Bolduc is actually running so far.

A side note: Sununu blamed Donald Trump for the January 6 Capitol riots and could be denied the GOP nomination if Trump forces mobilize to block him.

ILLINOIS 16TH CD — “When Catalina Lauf launched her 2020 GOP campaign for Congress in a district outside of Chicago, it got little notice. Her Wednesday video announcing her 2022 primary challenge to Rep. Adam Kinzinger (R-IL) quickly skyrocketed to more than 523,900 views,” the Chicago Sun Times reports.

“A primary contest between Kinzinger and Lauf, if indeed it pans out, will be part of the GOP civil war being waged across the nation between Trump Republicans and Republicans who do not embrace the ex-president.”

TEXAS 6TH CD — Sery Kim, who served in the Small Business Administration  during the Trump administration, announced Thursday that she would run as a Republican in the May 1 special all-party primary to succeed the late Rep. Ron Wright. Kim, who is the daughter of immigrants from Korea, would be Texas’ first Asian American member of Congress. Another recent arrival to the race is Army veteran Mike Egan, who was twice awarded the Bronze Star.

The Republican who has attracted the most attention so far, though, is longtime party activist Susan Wright, the wife of the late congressman. On Thursday, Wright unveiled endorsements from two congressmen from other Texas seats, Lance Gooden and Jodey Arrington. Wright also has the backing of several other Republicans who had been mentioned as possible candidates: state Reps. David Cook and Tony Tinderholt, Tarrant County Sheriff Bill Waybourn, and Arlington Mayor Jeff Williams.

On the Democratic side, state Rep. Chris Turner said this week that he would stay out of the race. The filing deadline is Wednesday.

“A second former aide to Gov. Andrew Cuomo (D) is accusing him of sexual harassment, saying that he asked her questions about her sex life, whether she was monogamous in her relationships and if she had ever had sex with older men,” the New York Times reports.

“The aide, Charlotte Bennett, who was an executive assistant and health policy adviser in the Cuomo administration until she left in November, told The New York Times that the governor had harassed her late last spring, during the height of the state’s fight against the coronavirus.”

NEW YORK GOVERNOR — For some reason, term-limited New York City Mayor Bill de Blasio isn’t ruling out a bid for governor next year. “I have not made any plans yet for my next steps,” said de Blasio when asked about a possible campaign in a new radio interview, adding that he was focused on battling the coronavirus pandemic.

De Blasio’s feuds with fellow Democrat Andrew Cuomo have been legendary, but the governor has always gotten the better of the mayor, so it’s hard to see why de Blasio would be interested in more punishment. That said, for the first time in his career, Cuomo is facing some united opposition from members of his own party, who are furious over his attempts to conceal the extent of nursing home deaths due to COVID-19. That recently exposed effort has reportedly prompted the FBI to open an investigation into the Cuomo administration, and in addition, Cuomo also faces new sexual harassment allegations (see our separate item just above).

It’s still hard to imagine Cuomo, who handily fended off primary challenges from the left in both 2014 and 2018, losing a bid for renomination, and even though he’s currently at an ebb, no prominent opponents are actually running against him. It would be an even bigger surprise if Cuomo were to abandon his quest for a fourth term, a goal that eluded his father, the late Mario Cuomo, who was a victim of the 1994 Gingrich wave. But if he were nonetheless to retire, there are plenty of Democratic politicians more popular than de Blasio who could jump in, such as state Attorney General Tish James.

WISCONSIN U.S. SENATOR — State Treasurer Sarah Godlewski, one of several Wisconsin Democrats considering a bid for Senate, will decide whether to enter the race in the spring, per an unnamed spokesperson. Already running for the Democratic nod are Milwaukee Bucks executive Alex Lasry and Outagamie County Executive Tom Nelson.

NORTH CAROLINA U.S. SENATOR — For the first time in a while, Lara Trump, the wife of Donald Trump’s son Eric, has spoken up about her possible interest in a Senate bid, telling Fox’s Sean Hannity. “I’ve taken it very seriously and I have no decision to announce. .. But I will tell you, stay tuned, because it is certainly something that I would be honored to do.” That’s the first time Trump has directly confirmed her interest; in the past, she hadn’t gotten any further than declining to rule out a run.

FLORIDA U.S. SENATOR — Democratic Rep. Stephanie Murphy says she’s “seriously considering” a bid for Senate, though she says she’s looking both at a race next year, when Marco Rubio will be up for re-election, and in 2024, when it’ll be Rick Scott’s turn. To that end, she’s kicked off a “statewide listening tour,” though she didn’t offer a timeline as to when she might make a decision.

Politico reports that Senate Majority Leader Chuck Schumer has encouraged her to challenge Rubio and says that Rep. Val Demings “has also been approached” but seems less interested than her fellow Orlando-area congresswoman. In part that may be because Murphy’s swingy suburban district is more likely to be targeted by Republicans in redistricting than Demings’ seat, which is considerably bluer.

“People familiar with the meeting — which touched on a wide array of topics related to Trump’s political activities and the organizations supporting them — noted that the full plans for Trump’s operation are not finalized and they were uncertain about some details.”

“Trump has already established a leadership PAC, Save America, that has raised tens of millions of dollars. But unlike leadership PACs, which are limited in terms of how much money they can raise from individual donors, super PACs are able to raise and spend unlimited amounts.”