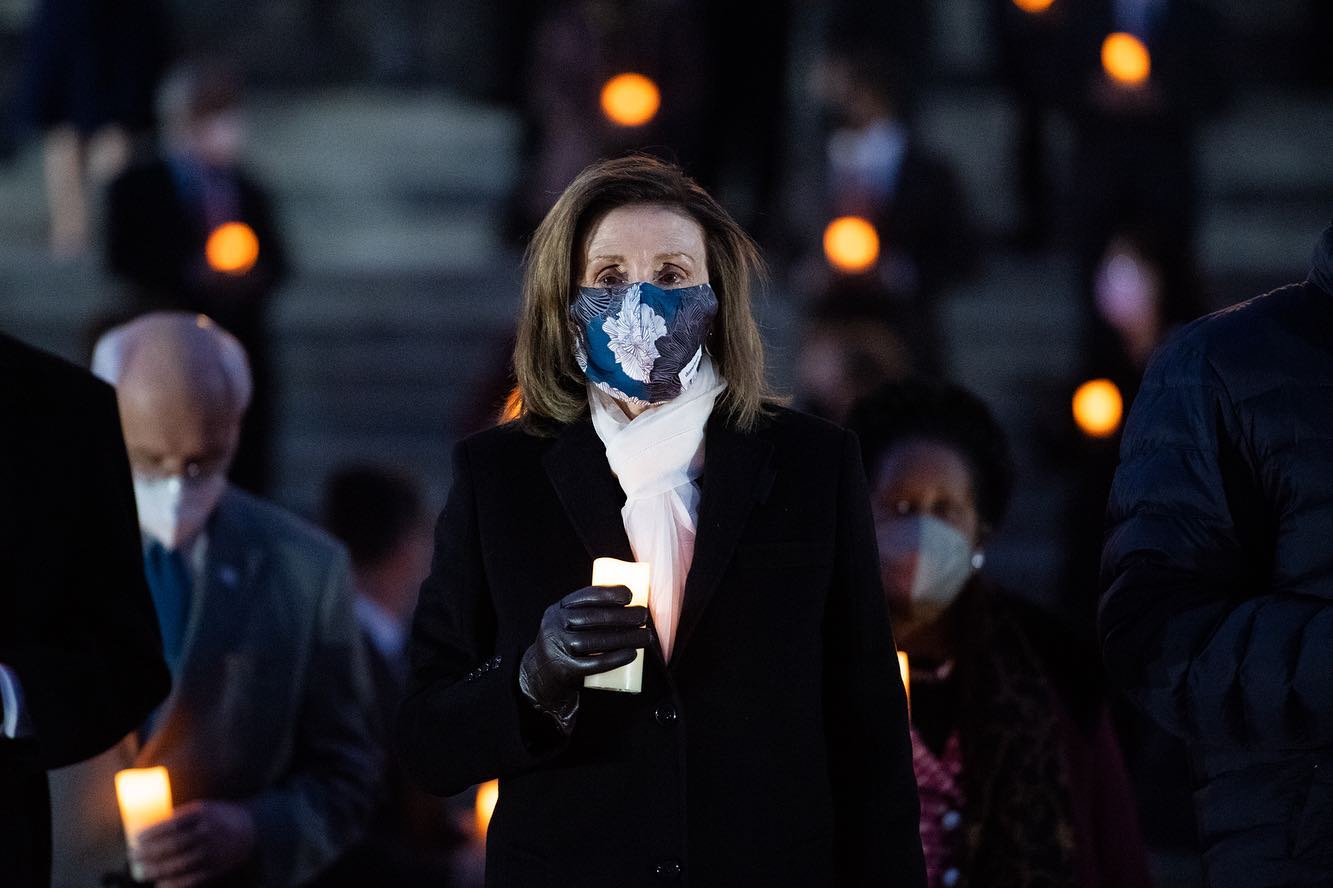 The bill, known as the American Rescue Plan, passed 219-212. No Republicans voted for it, and two Democrats voted against it: Rep. Kurt Schrader, D-Ore., and Jared Golden, D-Maine.

The measure now heads to the Senate where it faces a rocky path in the evenly divided chamber.

No Senate Republicans are expected to support the bill, citing its size and scope, so the president will have to count on every one of the 50 Democratic senators — and a tie-breaking 51st vote from Vice President Kamala Harris — to make sure its key pillars remain in the bill.”

“While the president hoped to enlist Republican support for the measure, Schumer has worked to ensure he has a solid 50 votes to muscle it through if necessary. A parliamentary ruling Thursday improved his chances.”

First Read: “Democrats didn’t have 50 Senate votes to pass a $15 minimum wage increase, and the entire debate was complicating the rest of the Covid-19 relief package.”

“So if the goal was having the least amount of drama before passing the bill, then the Senate parliamentarian did Biden and the Dems a big favor (and it’s maybe the reason why Biden had already been signaling that the minimum wage hike wasn’t going to survive).”

“Now there’s a legitimate debate for Biden and the Dems on what they do next on the minimum wage. Do they try to pass a stand-alone hike to $15? Somewhere lower but tied to inflation? Or do they take tax deductions away from corporations that don’t pay a $15 per-hour minimum wage, as Sen. Bernie Sanders, I-Vt., called for after the parliamentarian ruling?”

“The Democratic Party’s liberal wing is mounting a pressure campaign to overrule a decision from the Senate parliamentarian after their hopes to include a $15-an-hour minimum-wage increase in the coronavirus relief bill were dealt a major blow,” the Washington Post reports.

“Liberals are furious with the late-breaking — but not entirely unexpected — ruling from the nonpartisan Senate umpire last night that the provision cannot remain in President Biden’s $1.9 trillion relief package as written.”

“The White House has publicly ruled out overruling the parliamentarian — and it’s unlikely that all 50 Senate Democrats would stand united on this even if it got on board… But that’s not stopping the members of the Congressional Progressive Caucus from reaching out to White House Chief of Staff Ron Klain seeking support to overturn the decision.”

Senate Democratic leaders are weighing including a tax penalty on large corporations that refuse to pay wage workers at least $15 an hour and passing it through reconciliation, the Washington Post reports.

Punchbowl News: “We already knew that House Democrats were going to bring back earmarks for the 12 annual spending bills. But here’s something new: Democrats are moving toward allowing earmarks on the large-scale infrastructure bill they’re planning for this spring.”

“Allowing earmarks could make it easier to pass this bill. It could give lawmakers a chance to list the projects in their district that need federal cash, and give them more political buy in to the package. It will also push appropriations lobbying into overdrive. If you’re a state, municipality or local government and you need an infrastructure project funded, it’s time to get a lobbyist. Just like the old days in D.C.”

“The US military struck a site in Syria on Thursday used by two Iranian-backed militia groups following rocket attacks on American forces in the region in the past two weeks,” CNN reports.

“The strikes mark the military’s first known action under President Joe Biden. The site was not specifically tied to the rocket attacks, but were believed to be used by Iranian-backed Shia militias operating in the region.”

“Sen. Tim Kaine (D-VA) criticized the Biden administration for Thursday night’s airstrike against facilities in Syria linked to an Iran-backed militia group, demanding that Congress immediately be briefed on the matter,” Axios reports.

Said Kaine: “Offensive military action without congressional approval is not constitutional absent extraordinary circumstances. Congress must be fully briefed on this matter expeditiously.”

Axios: “The White House announced sanctions on entities implicated in the murder, though not on MBS directly. Officials also announced a new ‘Khashoggi ban’ under which individuals accused of harassing journalists or dissidents outside their borders can be barred from entering the U.S.”

“After what one official described as ‘intensive consultation with security officials’ and the Personnel Security Division, the White House will now, on a case-by-case basis, waive a requirement that potential appointees in the Executive Office of the President be eligible for a ‘Top Secret’ clearance. Officials said a waiver would only be granted to those who have used marijuana on a ‘limited basis’ and who are in positions that don’t ultimately require a security clearance.”

Sen. Lisa Murkowski (R-AK) will meet on Monday with Neera Tanden, the Biden administration’s pick to lead the Office of Management and Budget, CNN reports.

“Tanden’s confirmation is on the rocks after at least one Democratic and several moderate Republican senators announced their opposition to her appointment… Murkowski is seen as a potential swing vote who could save Tanden’s nomination, but the senator has not indicated how she would vote.”

“After insisting for the last few months that she didn’t need a clear-cut portfolio in the Biden administration, Vice President Kamala Harris is now trying to carve out a niche in foreign policy, with the president’s encouragement,” Politico reports.

“It’s what the administration would say is proof of the equal partnership between the two, with Biden willing to bring Harris onto turf he is both known for and familiar with.Others say it’s more strategic: developing her own foreign policy credentials and being seen as Biden’s partner on these issues will give her an edge heading into 2024 or 2028.”

Vanity Fair runs an excerpt from Lucky: How Joe Biden Barely Won the Presidency on how Biden’s campaign team tried to tone down Julia Louis-Dreyfus’ act at the Democratic convention.

“John Boehner has been going off script while recording the audio version of his new memoir, using expletives and asides not in the book — such as the former Republican House speaker saying, ‘Oh, and Ted Cruz, go fuck yourself,’” Axios reports.

The audio version — which costs more than the book itself — “will be sprinkled with Boehner’s unfiltered, baritone, inner monologue.”

Elaine Godfrey: “Assessing political liability for a natural disaster is tricky. Texas is still a Republican state. Despite Democrats’ progress in recent elections, the power-grid collapse of 2021 is not likely to be the final push that turns the Lone Star State blue.”

“But the specific circumstances of last week’s catastrophe make predicting voter behavior more difficult than it might normally be. Political experts I spoke with were confident about at least one thing: The disaster will almost certainly inspire more Democrats to challenge the state’s ruling party.”

“Sen. Ted Cruz’s colleagues had a little fun at the Texas Republican’s expense when he returned to Washington this week following his infamous trip to Cancun,” NBC News reports.

“When senators arrived at the Senate gym on Wednesday morning, they found that one of them had taped memes on the lockers welcoming Cruz home and showing him in the short-sleeve polo shirt, jeans and Texas-flag mask that he had at the airport… ‘Bienvenido de Nuevo, Ted!’ was the ‘welcome back’ message typed at the top of the color printouts.”

Slate: “The United States judiciary does not have enough judges. This is not a partisan gripe but an objective problem that has overwhelmed federal courts and imposed unconscionable delays on litigants for decades. On Wednesday, the House of Representatives’ subcommittee on courts held a hearing to confront this quandary; remarkably, Democrats and Republicans agreed that Congress has an obligation to expand the federal judiciary by adding new seats to both district and appeals courts.”

“But several Republicans endorsed a scheme that would prevent President Joe Biden from filling these new seats, at least in his first term. Their political maneuvering may not be fatal to the vital project of lower court expansion, but it could doom Democrats’ effort to swiftly restore a fully functioning judiciary.”

“Biden faces an early choice. He can act on the hopeful bipartisan rhetoric of his inaugural address — and his presidential campaign — or contradict that message by trying to jam a $1.9 trillion bill through reconciliation with no GOP support. Working together has the benefit of crafting more-targeted policies, while showing a divided country that we can unite at a time of crisis.”

However, a new Economist/YouGov poll finds 66% of Americans support the bill, while just 25% oppose it.

Michelle Cottle: “For a host of reasons — including the growing polarization and ideological extremism of members of Congress — the policies that a bipartisan majority of Americans favor often have little overlap with the positions their elected leaders stake out. All too often, even lawmakers who support a bill are bullied into opposing it by their leadership or threatened with retaliation by the more extreme, more intransigent elements of their party. Broadly popular policies fall victim to congressional game playing.”

“Going forward, Mr. Biden should think, and talk, about bipartisanship as it relates to the American public — not whether a few tribal warriors in Congress can be coaxed into crossing party lines.”

E.J. Dionne: “The best kind of partisanship, based on those universal values, promotes fierce but constructive arguments. It acknowledges that in a good society, most political differences involve not a choice between good versus evil, but among competing goods — efficiency, security, entrepreneurship, fairness, individualism and solidarity, to name a few. Compromise (along with, yes, bipartisanship) is easier when we’re honest about the trade-offs we’re making.”

“So our fight should not be against partisanship. It should be in favor of rehabilitating the vibrant and honest partisanship on which democracy depends.”

Tom Nichols: “We are living in a time of bad metaphors. Everything is fascism, or socialism; Hitler’s Germany, or Stalin’s Soviet Union. Republicans, especially, want their followers to believe that America is on the verge of a dramatic time, a moment of great conflict such as 1968—or perhaps, even worse, 1860. (The drama is the point, of course. No one ever says, ‘We’re living through 1955.’)”

“Ironically, the GOP is indeed replicating another political party in another time, but not as the heroes they imagine themselves to be. The Republican Party has become, in form if not in content, the Communist Party of the Soviet Union of the late 1970s.”