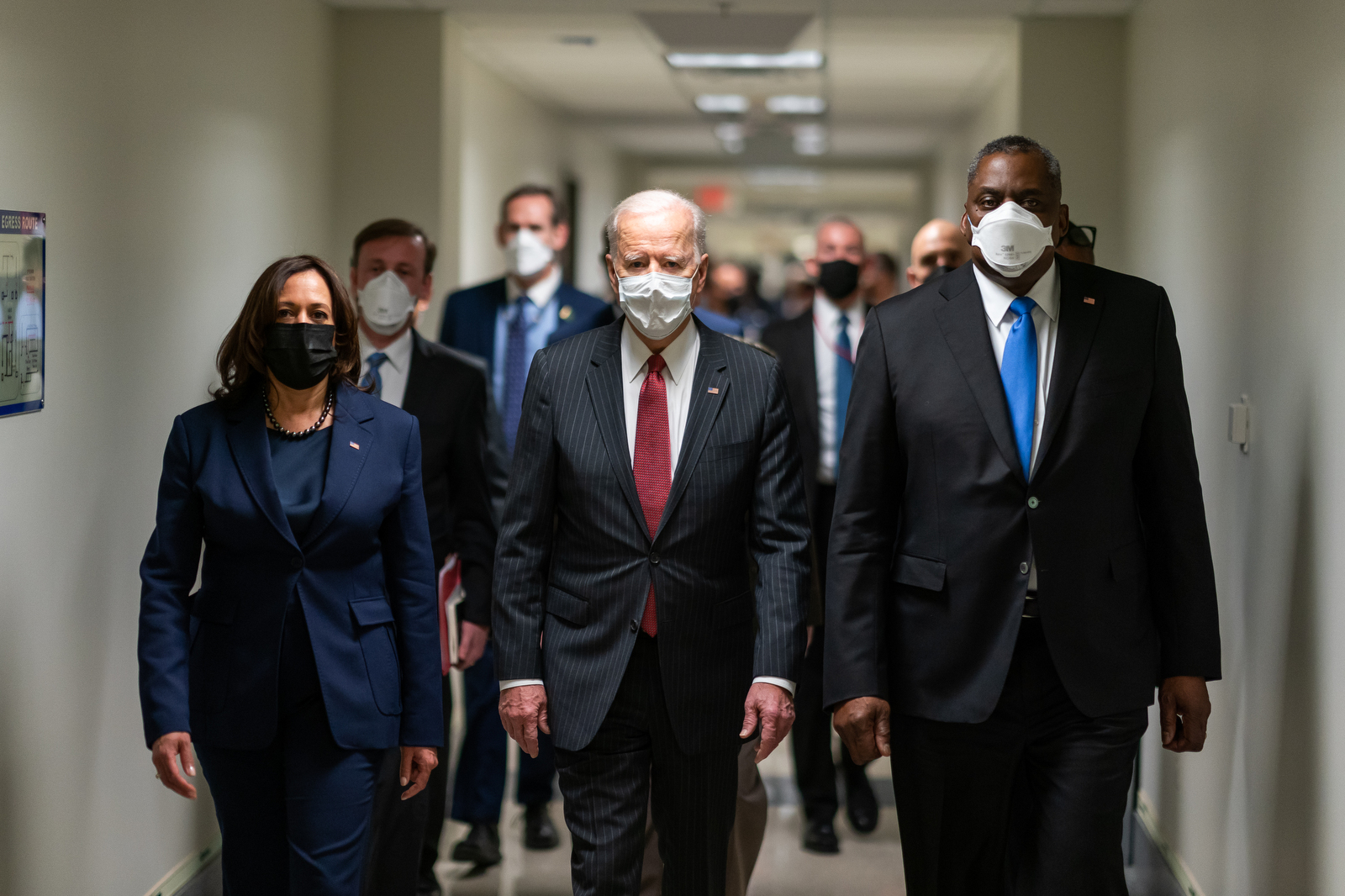 “Donald Trump will begin to reassert control over the Republican Party this weekend at the Conservative Political Action Conference in Orlando, Florida — his first major public address since he left the White House,”NBC News reports.

“Banned from Twitter and golfing in Florida, Trump has kept unusually quiet since President Joe Biden was inaugurated a month ago — but that won’t last.”

“It’s a tradition that former presidents lie low in deference to their successors, but Trump has many bones to pick, some of them with Republicans whom he views as disloyal, and he is eager to make himself the party’s chief kingmaker ahead of a possible comeback presidential run in 2024.”

Karl Rove: “One approach would be to devote the speech to his anger and grievances over losing the election. He could complain it was stolen and brag about winning more than 74 million votes. He could claim credit for every GOP victory, from flipping House seats to adding state legislative chambers, while blaming others—notably Minority Leader Mitch McConnell—for every GOP failure, including losing the Senate…”

“There’s a second approach Mr. Trump could take Sunday. He could emphasize his agenda and contrast it with Mr. Biden’s policies starting with the new administration’s immigration proposal. He could share an expanded vision of where he would be taking America if he were still in the Oval Office, something he failed to do during his re-election campaign. He could remind people of his pre-Covid economic achievements. He could finally express compassion about those who died or suffered from Covid and declare his pride in Operation Warp Speed…”

“Leaders who come out of the wilderness after defeat do so by changing their approach and re-creating themselves. It’s unclear whether Mr. Trump has the ability to change, especially after a defeat that left him embittered and isolated. What are the odds Mr. Trump takes the more constructive second tack?”

Vox: “The Golden Calf is one of the most famous stories in the Old Testament. The Israelites, newly freed from Egyptian slavery, have a crisis of faith while God is speaking with Moses on Mount Sinai. They melt down the golden jewelry to construct a physical god — a statue in the shape of a calf — to worship in place of their abstract, invisible deity. It’s a story about the allure of idolatry, how easy it is to abandon one’s commitments to principle in favor of shiny, easy falsehoods.”

“This biblical tale trended on Twitter in the US Friday morning because of the following video, filmed on the first day of the 2021 Conservative Political Action Conference. Someone involved in the conference constructed a golden statue — not of a calf, but of Trump — and wheeled it out to cheers from conference attendees.”

“We can sit around and have debates about conservative policy… but the question is, when the klieg lights get hot, when the left comes after you, do you stand strong or do you fold?” — Florida Gov. Ron DeSantis (R), at CPAC, warning against a return to the old Republican “establishment.”

His conclusion: “All told, the sharp increase in absentee voting in 2020 wasn’t disproportionately beneficial to either presidential candidate.”

Ed Kilgore: “Republican senators haven’t represented a majority of the U.S. population since 1996 and haven’t together won a majority of Senate votes since 1998. Yet the GOP controlled the Senate from 1995 through 2007 (with a brief interregnum in 2001–02 after a party switch by Jim Jeffords) and again from 2015 until 2021.”

“The moves speak to the powerful role White House Deputy Chief of Staff Jen O’Malley Dillon — who’s become Biden’s point person dealing with the DNC — has at the committee.”

Politico: “Secretaries of state will be on the ballot in five of the 10 closest presidential battlegrounds next year.”

Senate Minority Leader Mitch McConnell (R-KY) told Fox News that if Donald Trump is the Republican presidential nominee in 2024 then he will support him.

Politico: “The early dynamic — driven by the belief that the old D.C. model of who runs for Senate has changed — means Democrats will not be wanting for candidates in next year’s most important states. But it also demonstrates there are not runaway Democratic frontrunners in those 2022 states, the way there were in many recent Senate battlegrounds. And it means there’s a strong likelihood the party will face competitive nomination fights next year.”

Said one campaign operative: “All signs in Pennsylvania, Wisconsin, North Carolina point to very active primaries of the likes the committee has almost completely been able to avoid until now.”

TEXAS 6TH CD — Katrina Pierson, who was a prominent spokesperson for Trump in 2016 and 2020 and has spent the last few months spreading conspiracy theories about Joe Biden’s win, also said over the weekend that she was thinking about running. Before she entered Trump’s orbit, Pierson ran in the 2014 primary against incumbent Pete Sessions in the 32nd District, another seat in the Dallas-Fort Worth area, and lost 64-36. (Sessions now represents a third seat, the 17th District.)

The Dallas Morning News also mentions state Rep. Tony Tinderholt as a possible Republican candidate as well as Dan Rodimer, who was the Republican 2020 nominee for Nevada’s 3rd District. This is the very first we’ve heard of Rodimer, whose active Twitter account continues to list his location as Las Vegas, campaigning in another state.

On the Democratic side, 2020 nominee Stephen Daniel said Tuesday that he would not run. Jeffers, meanwhile, mentions former Homeland Security official Patrick Moses, who works as a minister, as a potential candidate.

Vice News: “For weeks, QAnon followers have been hyping March 4 as the date when Trump would return as the rightful president of the U.S. But in the last couple of days, virtually all the major QAnon figures and influencers have reversed course and dismissed the date, calling it a false flag event created entirely by the mainstream media to ‘make the whole movement look dumb.’”

CONNECTICUT 2ND CD — Republican state Rep. Mike France announced Tuesday that he would take on Democratic Rep. Joe Courtney. France is Courtney’s most prominent opponent since 2006, when the Democrat first won his seat by ousting Republican Rep. Rob Simmons by 83 votes, but he’ll still have a very tough time prevailing in an area that almost always favors Democrats: While this eastern Connecticut seat backed Hillary Clinton only 49-46, it returned to form last year and supported Joe Biden 54-44.

France, whom the CT Post notes was one of only eight lawmakers to vote no on a 2017 law to ban gay conversion “therapy,” also doesn’t seem at all interested in moderating himself. He opposed a 2019 bill that would have removed the state’s religious exemption to mandatory immunizations for public school students―legislation that, unfortunately and ironically, failed to advance after the coronavirus pandemic overshadowed everything else.

WASHINGTON 3RD CD — Three Republicans recently announced campaigns against Rep. Jaime Herrera Beutler, who is one of the 10 House Republicans who voted to impeach Donald Trump in January, though it remains to be seen if any of them are capable of running a serious campaign. The field consists of Navy veteran Wadi Yakhour, who worked on the Trump campaign; evangelical author Heidi St. John; and Army veteran Joe Kent.

MARYLAND GOVERNOR — Nonprofit head Wes Moore, an Army veteran who served in Afghanistan, told Maryland Matters this week that he was considering seeking the Democratic nomination to succeed termed-out Republican Gov. Larry Hogan. Moore, who would be the state’s first Black governor, did not give a timeline for when he’d decide, though Maryland Matters reports it would likely be in “mid-to late spring.”

Moore is also a nonfiction author whose work includes Five Days, a well-received 2020 book about the 2015 “uprising that overtook Baltimore after the police killing of Freddie Gray.” Moore himself has not run for office before, though Kurtz notes that his wife served as a top aide to then-Lt. Gov. Anthony Brown.

A number of other Democrats are considering entering the race including Brown, who lost the 2014 contest to Hogan but was elected to the U.S. House two years later. For now, though, the only two announced candidates are Comptroller Peter Franchot, who recently received an endorsement from the Laborers’ International Union of North America, and former Obama administration official Ashwani Jain.

MASSACHUSETTS GOVERNOR — Democrats have speculated for years that Attorney General Maura Healey could run for governor in 2022 whether or not Republican Gov. Charlie Baker seeks re-election, and the talk only intensified this week after Healey made a pair of high-profile visits to vaccination sites. Healey, unsurprisingly, has denied that these stops were, in the words of the conservative Boston Herald, a “precursor to a potential gubernatorial bid,” but she doesn’t appear to have publicly addressed if she’s thinking about running for the state’s top job.

Healey, like Baker, is eligible to seek a third term next year, and there’s little question she’d win re-election. If she instead ran for governor, though, Healey would almost certainly start the primary as the most-high profile contender in the race: Healey won re-election in 2018 by a 70-30 margin, and she has nearly $3 million on-hand in her state account. Healey would be both the first woman elected to lead Massachusetts (Republican Jane Swift ascended to this office in 2001 but never sought election in her own right), as well as the Bay State’s first LGBTQ governor.

FLORIDA GOVERNOR — The Orlando Sentinel reports that state Sen. Randolph Bracy is considering seeking the Democratic nomination to take on Republican Gov. Ron DeSantis in 2022. Bracy, who would be the Sunshine State’s first Black governor, has used his time in the legislature to champion criminal justice reforms that have mostly failed to advance in the GOP-dominated body. Bracy was also in the news in early 2017 when he expressed interest in a primary challenge against then-Sen. Bill Nelson, though he didn’t end up going for it.

GEORGIA U.S. SENATOR — With David Perdue now safely out of the way, a variety of Republicans are popping their heads up to express interest in challenging Democratic Sen. Raphael Warnock next year. In addition to the two big names already on the list, former Sen. Kelly Loeffler and former Rep. Doug Collins, the Atlanta Journal-Constitution catalogs a whole host of alternatives:

CINCINNATI MAYOR — The crowded May 4 nonpartisan primary for this open seat got a little smaller on Monday when local election officials announced that Democratic City Councilman Wendell Young had failed to turn in enough valid signatures to make the ballot.

NEW YORK CITY MAYOR — Former City Council Speaker Christine Quinn said this week that she would not run to succeed termed-out incumbent Bill de Blasio, who defeated her in the 2013 Democratic primary.

Santiago, who was elected to a legislative seat based in the South End in 2018 by beating a longtime incumbent in the primary, used his kickoff to highlight his career as an emergency room doctor at Boston Medical Center. The Boston Globe also notes that Santiago has been a frequent guest on local TV over the last year to discuss the pandemic.

Santiago, who is originally from Puerto Rico, would be the first person of color to be elected mayor in a city that has up until now only been led by white men. Santiago’s three opponents, City Councilors Michelle Wu, Andrea Campbell, and Annissa Essaibi George, would also be the first women of color elected to this post. First, though, City Council President Kim Janey would become the first woman of color to serve as mayor in the very likely event that incumbent Marty Walsh is confirmed as U.S. secretary of labor; Janey has not yet announced if she would seek a full term this year.