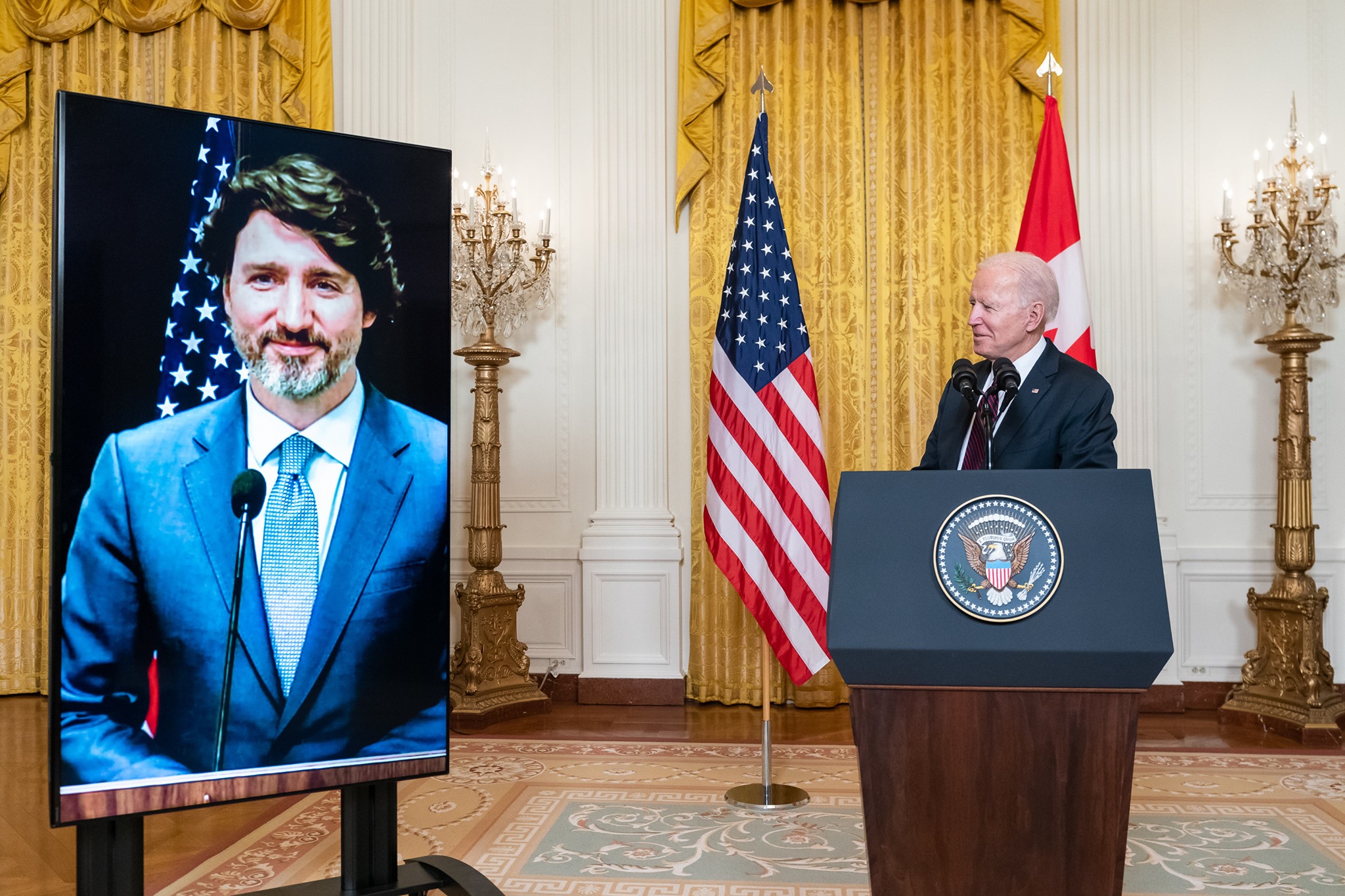 The Senate confirmed Gov. Jennifer Granholm to lead the Energy Department, 64 to 35. Meanwhile, “California Atty. Gen. Xavier Becerra appeared headed toward confirmation as the nation’s first Latino secretary of Health and Human Services after a pivotal hearing passed Wednesday with few fireworks and no serious blows inflicted by Republicans hoping to derail him,” the Los Angeles Times reports.

Jonathan Bernstein: “Senator Ted Cruz (AWOL-Cancun) is on a roll, criticizing Xavier Becerra, President Joe Biden’s nominee to lead the Department of Health and Human Services, for having what he sees as the wrong qualifications for the job: ‘If a Republican tried to nominate a trial lawyer like Xavier Becerra to lead HHS in the midst of a global pandemic, they would be laughed out of the room.’ He’s not alone; Cruz joined 10 other Republican senators in complaining that Becerra is unqualified for the position.”

“They’re wrong. In fact, Becerra, who spent 12 terms in the House before serving as California’s attorney general starting in 2017, couldn’t be a more typical nominee. And there are very good reasons why presidents keep picking nominees with similar backgrounds. The job of a cabinet secretary, whether at HHS or elsewhere, is more than anything a political job, so politicians are the ones with the right training for the position.”

Wall Street Journal: “Sen. Bernie Sanders never got a heads up. There was no campaign to pressure Sen. Joe Manchin to change his mind. And the phones didn’t immediately ring in the offices of key Senate Republicans when it became clear the White House needed them…”

“Over the weekend, once it became obvious that Ms. Tanden’s nomination was in serious trouble, lawmakers and aides say they saw scant evidence of an intensive campaign to salvage the pick from a team that promised to bring Capitol Hill savvy back to the West Wing.”

“The guidance from the parliamentarian, Elizabeth MacDonough, was communicated privately to key Senate offices and confirmed by aides in both parties. It could be a major setback for liberals hoping to use Biden’s $1.9 trillion relief bill as the vehicle for their long-sought goal of raising the federal minimum wage from its current level of $7.25 an hour.”

Politico: “Democrats will need to come up with a back-up plan.”

Punchbowl News: “The buzz around the House chamber late Thursday afternoon was that the vote on the $1.9 trillion Covid relief package — aka the ‘American Rescue Plan’ — could slip to Saturday. It’s currently scheduled for Friday, but there seemed to be a bit of skepticism late this afternoon that the vote would proceed on time.”

“House Democratic leaders are scrambling to tweak any provisions in the legislation that could be “fatal” to the reconciliation bill in the Senate under the Byrd Rule, meaning cause it to lose its privileged status under reconciliation.”

“If you see the House Rules Committee delay its meeting on Friday, which is currently set for 9:30 a.m., then you’ll know there’s a problem.”

Sen. John Thune (R-SD) announced his opposition to raising the federal minimum wage to $15 an hour by tweeting a personal story:  “I started working by busing tables at the Star Family Restaurant for $1 an hour and slowly moved up to cook — the big leagues for a kid like me — to earn $6/hour.  Businesses in small towns survive on narrow margins. Mandating a $15 minimum wage would put many of them out of business.”

Of course, as Newsweek points out, Thune’s $6 an hour wage adjusted for inflation would be $24 an hour today.

Politico: “Some extremists who joined the January 6 insurrection have discussed plans to attack the building during the State of the Union.”

Acting Capitol police chief Yogananda Pittman told a congressional hearing there are 35 officers under investigation for the January 6 insurrection “and we do have six police officers that have been suspended with their police powers being revoked, so those investigations are ongoing at this time.”

President Joe Biden reopened the country on Wednesday to people seeking green cards, ending a ban on legal immigration that President Donald Trump imposed last spring, citing what he said was the need to protect American jobs during the pandemic, the New York Times reports.

Biden said that the ban did “not advance the interests of the United States.”

CNN: Here are the executive actions Biden has signed so far.

“The question I’m asked most often is, ‘When will things get back to normal?’ My answer is always honest and straightforward — I can’t give you a date. I can only promise that we’ll work as hard as we can to make that day come as soon as possible.” — President Biden, quoted by CBS News.

Politico: “The crumbled alliance between Trump and McConnell, who worked hand-in-glove on political and legislative strategy for four years, has finally brought the GOP to the reckoning that never happened after the 2016 election. Trump may take another swipe at McConnell in the coming days at the Conservative Political Action Conference. But McConnell probably won’t hear it: He is not expected to speak at CPAC, according to Republican sources. McConnell still hasn’t spoken to Trump in more than two months.”

“And interviews with nearly a dozen Senate Republicans on Monday night make clear that it will take more than a war of words with Trump to knock McConnell off his perch.”

Former Trump administration officials are testing the waters for political office, underscoring the former president’s lasting influence on the Republican Party as it searches for a post-Trump identity, The Hill reports.

Said McCarthy: “The idea that a Republican would join in with cancel culture is wrong, it’s beyond just having a difference of opinion.”

Playbook: “Such a jab doesn’t bode well for GOP unity in the leadership ranks. Typically, Republicans use this attack of ‘censorship’ on Democrats — not their own. Plus, Cheney has not called for Trump to be silenced, only said that he shouldn’t lead the party.”

“Drug companies planned to tell lawmakers Tuesday that they project a major increase in vaccine deliveries that will result in 140 million more doses over the next five weeks, saying they have solved manufacturing challenges and are in a position to overcome scarcity that has hampered the nation’s fight against the coronavirus,” the Washington Post reports.

The North Dakota House of Representatives passed a bill that would forbid mandatory mask wearing in the state, the Grand Forks Herald reports.

Washington Post: “When social media website Parler’s founding CEO John Matze was pushed out last month, it was at the direction of a quiet but powerful political megadonor backing the right-leaning site. Rebekah Mercer … increasingly pulls the strings at the company.”

“Now Mercer, who is credited with helping get Donald Trump elected president in 2016, is working to revive the site. … It’s the latest in a long line of maneuvers by the Mercer family to create an alternative media industry that pushes a version of the news that fits with their right-wing, populist political agenda — while keeping a low profile themselves.”

Sen. Lisa Murkowski (R-AK) said that she hasn’t made a decision on Neera Tanden’s nomination, leaving President Biden’s pick to lead the Office of Management and Budget stuck in limbo, The Hill reports.

Said Murkowski: “I saw that they pulled her from committee today, so it looks like I’ve got more time to be thinking about things.”

Politico: “One potentially gettable moderate, Sen. Susan Collins (R-Maine), is icy toward Schumer after he tried to oust her in Maine’s 2020 Senate race. But her deference to Biden on some issues doesn’t mean she can be a reliable lifesaver when someone like Manchin or Sinema thrusts a nomination or floor vote into peril.”

“Collins is a no on Tanden and said in an interview she’s undecided on Deb Haaland and Xavier Becerra, who has contacted her for a follow-up call. Asked if she has much of a relationship with Schumer these days, she replied flatly: ‘No.’”

Rep. Marjorie Taylor Greene (R-GA) placed a sign outside her office Wednesday mocking Rep. Marie Newman (D-IL), whose office sits across the hall, after Newman hung a transgender pride flag next to her door in protest over Greene’s opposition to a LGBTQ rights bill, NBC News reports.

The House voted 224 to 206 on Thursday to pass the Equality Act, which would expand federal protections for LGBTQ people by prohibiting discrimination based on gender identity and sexual orientation, Axios reports.  Three Republicans voted with all Democrats.

Dana Millbank: “Can you believe that Neera Tanden called Hillary Clinton the ‘anti-Christ’ and the ‘real enemy’? Oh, wait. It was Ryan Zinke who said those things. Fifty-one Republican senators (and several Democrats, including Joe Manchin) confirmed him as secretary of the interior in 2017.”

“And how about the times Tanden allegedly called the NAACP a ‘pinko organization’ that ‘hates white people’ and used racial epithets? My bad. That was Jeff Sessions. Again, 51 Republican senators (and one Democrat, Manchin) voted to confirm him as attorney general in 2017.”

“Surely Tanden went beyond the pale when she “liked” a tweet calling then-Secretary of State John F. Kerry a ‘traitor’ and ‘Vietnam’s worst export,’ and when she suggested Clinton supporters leave the country. Except Mike Pompeo was the one who did those things. He won confirmation as secretary of state in 2018 with the votes of 50 Republicans and six Democrats, including Manchin.”

President Biden declared during the campaign that he would repeal the Trump tax cuts on “day one,” but after more than a month in office, some key Democratic lawmakers say they are reluctant to raise taxes during an economic slowdown, The Hill reports.

“George Clooney is producing a docuseries about the decades-long sexual abuse scandal in the athletic department at Ohio State University, where Rep. Jim Jordan (R-OH) was once an assistant coach of the wrestling team,” Mediaite reports.