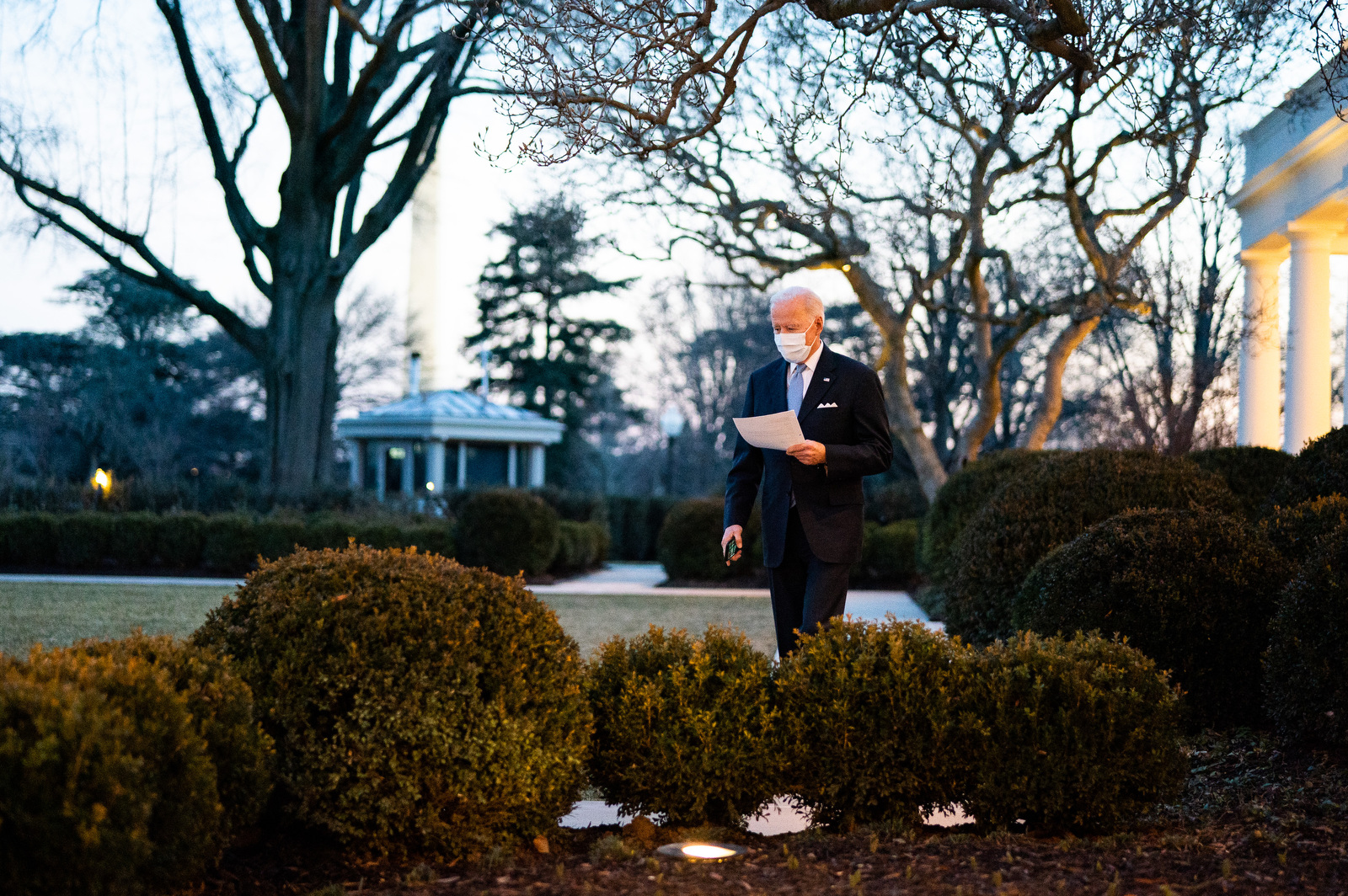 CNN: “[Terrorist leader and Crime Lord Donald Trump] typically spends mornings on his nearby golf course, making and taking calls from a golf cart that doubles as his mobile, and self-driven, office. The multiple trips to the links in the last few weeks have served to accomplish a long-promised goal, says someone who spent time with him recently: Donald Trump claims he has increased his drive by 20 yards, a new favorite brag to golfing partners, or anyone who will listen.”

“Eighteen holes later, he leaves his Trump International Golf Club and returns to Mar-a-Lago, where he retreats within his quarters to his own private living space, separate from that of his wife, and ponders two main questions: Who is with him? And who is against him?”

Daily Beast: “Once he and his remaining advisers start vetting conservative candidates or a possible slate of MAGA primary challengers in earnest, Trump has told several people he prefers to back candidates who haven’t ever conceded he lost the 2020 election.”

“If a potential candidate seeking Trump’s support has a proven record of saying Trump lost and that the months-long push to overturn the 2020 election was a mistake, that could be a nonstarter, the former president has said in recent weeks.”

“That decision came during the throes of the 2016 GOP nominating contest, when fellow Republicans were questioning Trump’s conservative credentials and when there was talk about a possible walk-out to protest Trump’s scheduled speech.”

“Now? Not only is Trump the featured Sunday speaker at this year’s upcoming CPAC conference in Orlando — coming after his defeat, after the GOP lost the Senate and after the Jan. 6 attack on the Capitol — he’s reshaped CPAC and the conservative movement in his image.”

“The former secretary of state is widely considered a potential 2024 presidential contender. His professional moves this week indicate he’s working to keep his name in the headlines and bolster a political brand built largely on foreign policies easily contrasted with the Biden White House.”

Rep. Sean Patrick Maloney (D-NY), the chairman of the House Democratic campaign arm, said he’s doing a deep dive into the party’s election failures in 2020, including a look at “why the polling sucked,” The Hill reports.

“Maloney said the Democratic Congressional Campaign Committee has commissioned a report examining why the party lost more than a dozen House seats over the course of an election in which they won the White House and a majority in the Senate.”

But he says to Politico, “Democrats won the White House, the Senate and the House of Representatives, so if there’s one party that’s doing an autopsy, it should be the Republicans. I’m not working on an autopsy.”

Amy Walter: “Donald Trump has been such a constant in our lives for the last four years that’s it’s hard to imagine our politics without him. Moreover, we’ve never seen a party, its voters and its elected leaders continue to enthusiastically embrace a candidate who lost re-election.”

“But, it’s also true that it is incredibly early to declare that he will continue to cast a defining shadow over the next election. Or even the next year. Democrats are in charge now. And, that means that their success—or failures—will be on the ballot in 2022.”

Bloomberg: “Tens of thousands of Republicans have left the party in the weeks since the Jan. 6 riot at the U.S. Capitol, a move that sidelines members who could have loosened Donald Trump’s ever-tightening grip on the GOP.”

“That’s a sliver of the 74.2 million people who voted for Trump in November… Yet the actual effect on partisan politics might be the opposite of what was intended. The remaining Republicans are likely to be those most loyal to Trump — which could help Trump-backed candidates get elected in primaries that often are decided by just a few votes.”

David Hopkins: “The idea of the self-declared single-term president has had a romantic appeal to editorial-page writers (and few others) since well before Biden became the oldest person in history elected to the job. Like many other ideas with romantic appeal, it is disconnected from political reality.”

“Declaring oneself a lame duck from the early days of an administration is not an effective strategy for a president to build or maintain influence, both inside and outside the party. The perception that you might be there awhile is a much better way to attract talented subordinates, pursue ambitious goals, and pressure members of Congress for support, and the inability to seek re-election is one reason why modern presidents’ second terms tend to be less focused and successful than their first.”

Morning Consult: “While Republicans offered the lowest amount of support, more than half of GOP voters still back the stimulus package at 60 percent. Thirty percent said they somewhat or strongly oppose the package.”

NORTH CAROLINA U.S. SENATOR — The News & Observer recently asked state GOP chair Michael Whatley’s team if he were interested in a bid for this open seat, and his team avoided answering the question. “Michael Whatley is focused on his role as the chairman for the North Carolina Republican Party and building on the party’s wins in the 2020 cycle,” said a spokesperson, which is not a no. The Washington Post reports that state GOP chair Michael Whatley is  considering a run to succeed retiring incumbent Richard Burr, a development that comes about a week after the Whatley-led Republican State Central Committee censured Burr for voting to convict Donald Trump.

On the Democratic side, a strategist for Attorney General Josh Stein said that his boss would be looking at his opportunities for both 2022 and 2024. Stein, who was re-elected to a four-year term back in November, has been mentioned as a possible Senate candidate, though unnamed sources recently told Politico that they expect him to instead run for governor in 2024.

DeBarros, who describes herself as “Afro-Latina,” launched her campaign by positioning herself as a “progressive Democrat” who is challenging “Donald Trump’s favorite New York Republican.” It would be very tough to win as an anti-Trump candidate in a Staten Island-based seat that he took 55-44 last year, but the upcoming round of redistricting could see Democrats dramatically alter the landscape here.

ILLINOIS 1ST CD — Jahmal Cole, who is the founder of a nonprofit focused on aiding local teens from low-income areas, has announced a bid against longtime Rep. Bobby Rush in the Democratic primary for this safely blue seat based in the South Side of Chicago. Politico describes Cole as a “charismatic” activist who has “become a voice for social justice on the city’s South Side.” Politico notes that Cole has spoken at press briefings held by Chicago Mayor Lori Lightfoot and also appeared in a video for Barack Obama’s presidential center.

Defeating Rush will be a massive undertaking, though, as none other than Obama learned the hard way in 2000 during the first, last, and only race the future president would ever lose. In 2016, Rush earned 71% of the vote as he turned back a challenge from Chicago Alderman Howard Brookins, and he won a similar percentage last year against three intra-party foes. Still, Rush, who will turn 76 just after Election Day, did flirt with retirement during the 2018 cycle, and it’s possible he’ll choose to call it a career this time.

ILLINOIS 16TH CD — Former Trump administration official Catalina Lauf announced Tuesday that she would challenge Rep. Adam Kinzinger, who infuriated conservatives nationwide by voting to impeach Donald Trump, for the Republican nomination. This seat, which is based in north-central Illinois, supported Trump 57-41 last year, but no one knows what this turf will look like after redistricting.

Lauf campaigned against Democratic Rep. Lauren Underwood last year in the neighboring 14th District, but Lauf’s bid came to an end after she took a close third place in the crowded primary. The self-proclaimed “anti-AOC” remained popular with national Republicans, though, and Lauf appeared in a convention video months later with her sister and proclaimed, “We come from Spanish descent and we’re millennial women and that’s not what the media wants.”

ILLINOIS GOVERNOR — State Sen. Darren Bailey, a Republican who has loudly opposed Democratic Gov. J.B. Pritzker’s measures to combat the pandemic, announced Monday that he would challenge the incumbent. Bailey, who won a promotion from the state House to the upper chamber last year, previously attracted national headlines in May after he was ejected from a House session for refusing to wear a face mask.

Bailey’s other claim to infamy is pushing for a hopeless bill to kick Chicago out of Illinois. Bailey himself acknowledged last year that his legislation was “not gonna happen,” though he seems to already be pretending that the state he’d like to lead is far more Trump-friendly than it actually is. Bailey’s most prominent supporter so far is freshman Rep. Mary Miller, who attracted the wrong type of attention during her first week in office when she declared, “Hitler was right on one thing. He said, ‘Whoever has the youth has the future.”