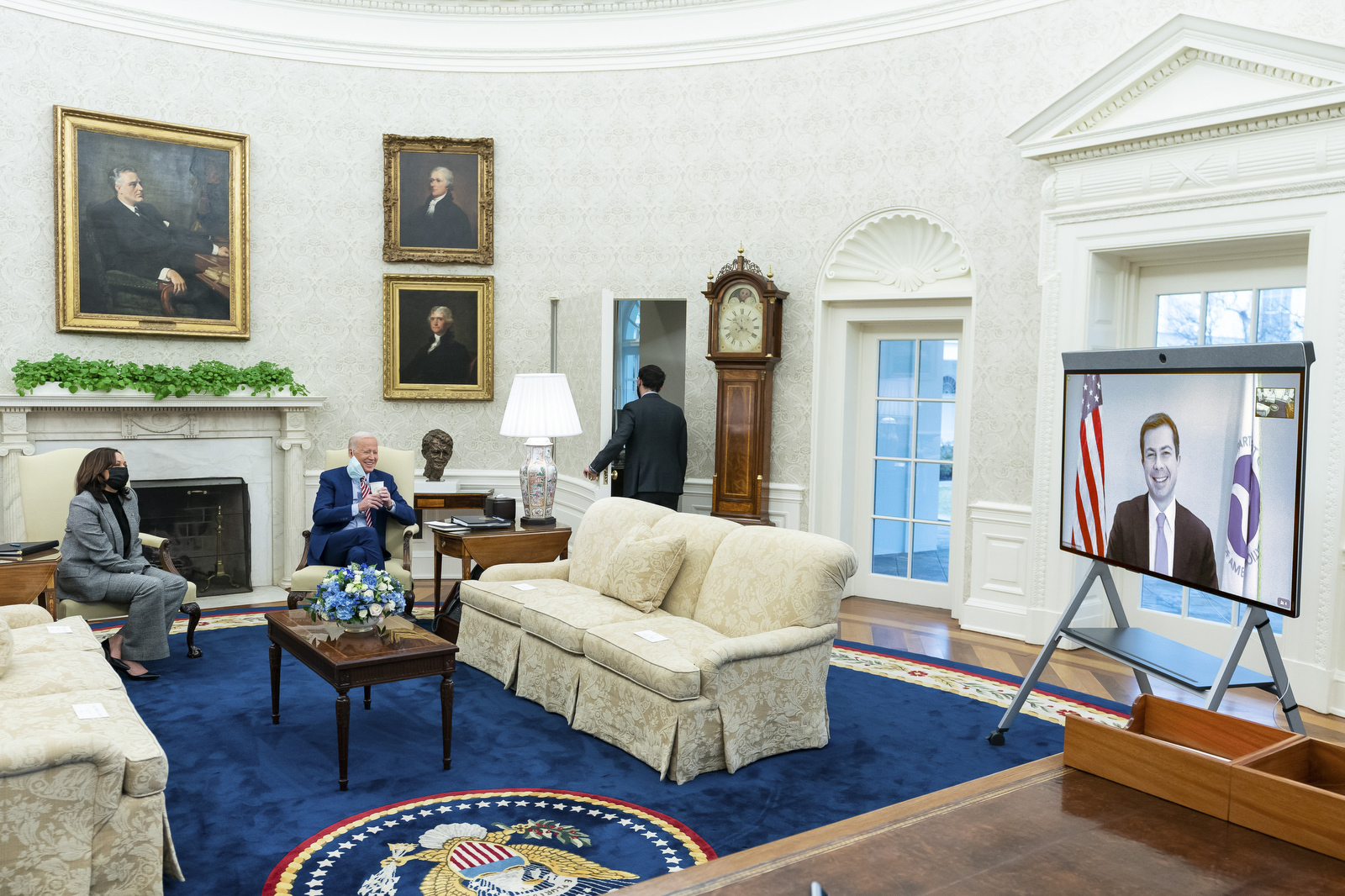 “If confirmed, the nominees would give Democrats a majority on the nine-member board of governors, with potentially enough votes to oust Postmaster General Louis DeJoy.”

Sen. Joe Manchin (D-WV) announced he will support the nomination of Rep. Deb Haaland (D-NM) to lead the Interior department, likely paving the way for her confirmation.

The White House has not yet pulled Neera Tanden’s nomination to be budget director because officials are still not sure whether Sen. Kyrsten Sinema (D-AZ) will support her confirmation, CNN reports.

If Sinema won’t support Tanden, her nomination is dead. But if Sinema does support Tanden, then there’s still a chance Sen. Lisa Murkowski (R-AK) could be persuaded to back her too.

“The Senate Homeland Security Committee is postponing a confirmation hearing scheduled Wednesday for Neera Tanden, a potential death knell for President Biden’s nominee to lead the Office of Management and Budget,” Axios reports.

“Senate Democrats are readying to pass President Biden’s infrastructure package through the budget reconciliation process, a recognition they’re unlikely to get much Republican support for a potential $2 trillion package,” Axios reports.

“Sen. Bernie Sanders told Axios on Tuesday he’s consulted with the White House about how to prepare for the next round of spending, and he’s ready to do it immediately via reconciliation — a process he controls as chair of the Senate Budget Committee.”

Lindsey Boylan accused New York Gov. Andrew Cuomo (D) of sexual harassment and bullying “so pervasive that it is not only condoned but expected.”

“His inappropriate behavior toward women was an affirmation that he liked you, that you must be doing something right. He used intimidation to silence his critics. And if you dared to speak up, you would face consequences.”

Alex Pareene: “The press often describes him berating and threatening his ostensible political allies in the Democratic Party, notes that he seemingly faces no electoral penalty for doing so, and concludes that that kind of behavior is baked into his appeal as a politician. People have been reading stories about it for years, and they keep electing him anyway: Maybe they actually like it.”

“This is, I think, a misreading of Cuomo’s political appeal and strategy, and misses what has made his recent round of terrible press so interesting. What is happening now is that fans of Andrew Cuomo the television character are being introduced to Andrew Cuomo the newspaper character.”

NPR: “The cost of repairing damages from the attack on the U.S. Capitol and related security expenses have already topped $30 million and will keep rising, Architect of the Capitol J. Brett Blanton told lawmakers on Wednesday.”

Politico: “Congress is taking its first steps toward a potentially massive investigation into the failures that contributed to the Capitol insurrection on Jan. 6. But its initial foray only underscored how little lawmakers — and the public — know about what truly transpired that day.”

Washington Post: “Some of Trump’s businesses are now in crisis, facing sharp drops in revenue and an exodus of clients, lenders, lawyers and business partners. Now, sharks are circling.”

“The Washington Post spoke with four investors who said they are exploring efforts to buy Trump’s properties or the loans he has taken out on them. They believe Trump has fatally wounded his brand — a view shared by some independent analysts — and they are hoping he will cut his losses by selling them luxe properties for cheap.”

Said one investor: “The first thing you do is you take the Trump name off them — which, by the way, could be a multiple-week effort, because it’s on everything. Once it’s gone, it’s a competitive asset.”

REPORTER: Do you believe former President Trump should speaking at CPAC?

McCARTHY: Yes he should.

CHENEY: That’s up to CPAC… Following January 6, I don’t believe that he should be playing a role in the future of the party or the country.

McCARTHY: On that high note, thank you very much.

Said Cheney: “You certainly saw anti-Semitism. You saw the symbols of Holocaust denial… you saw a Confederate flag being carried through the rotunda. We, as Republicans in particular, have a duty and an obligation to stand against that, to stand against insurrection.”

Jennifer Rubin: “Moreover, the pining for a sane Republican Party — a ‘center right’ party’ — makes sense only if one thinks such a party has a constituency and sufficient distance from the Democratic Party. Can you find a base for a party that, say, wants to spend a trillion dollars instead of $1.9 trillion on a covid-19 relief bill? Perhaps in a few states, but nationwide, it is unclear that there is a felt need for a Democratic-lite party, beyond rich donors.”

“It is no secret that modern conservatism, in large part a response to the Cold War, is ideologically spent.”

Salon: “One day before the Georgia Senate runoff elections — and two days before the Capitol insurrection — a leadership PAC attached to Sen. Ted Cruz (R-TX) paid hundreds of thousands of dollars to a mystery company that had previously bought copies of Cruz’s book…”

“Over the course of 2020, the Cruz-affiliated Jobs, Freedom, and Security PAC paid $1.2 million — nearly 80% of its operating budget — to a company called Reagan Investments LLC for ‘sponsorship advertising.’ The only other committee to register any disbursements to that company was Trump Make America Great Again, for a fundraising promotion for Cruz’s books in December… However, the Trump group clearly marked the payment for ‘collateral: books.’”

A Dallas party store is now selling Sen. Ted Cruz piñatas, depicting him on his way to Cancun, the Dallas Morning News reports.

“Texas’s deregulated electricity market, which was supposed to provide reliable power at a lower price, left millions in the dark last week. For two decades, its customers have paid more for electricity than state residents who are served by traditional utilities,” the Wall Street Journal reports.

“The president and the prime minister would like everyone to know that Canada and the U.S. are best friends again — though neither mentioned why the relationship had frayed,” Politico reports.

“So after four years of trade wars, name-calling and international gossiping, President Joe Biden and Canadian Prime Minister Justin Trudeau weren’t going to let a global pandemic get in the way of a public display of mutual affection, even if it had to happen over video link.”

Axios: “President Biden plans to call Saudi Arabia’s King Salman on Wednesday, ahead of the public release of a potentially damning intelligence report about the murder of journalist Jamal Khashoggi.”

“The call, if it happens as scheduled, will be Biden’s first conversation as president with the Saudi king. While they are likely to discuss a range of issues, the conversation will be colored by the imminent release of the explosive report expected to involve one of the monarch’s sons.”

“More than 150 senior executives from some of the largest American companies across several major industries have lined up behind President Joe Biden’s $1.9 trillion coronavirus relief package,” CNN reports.

“The group of executives includes the top executives representing some of the powerful business interests in the US, ranging from bank and investment firms like Goldman Sachs and Blackstone, to technology companies like Google, Intel and IBM, to hospitality companies like Loews Hotels & Co. and airlines including American and United Airlines. Top executives from real estate, insurance and utility firms also signed on to the letter.”

“Republicans tasked with winning back the House majority in 2022 see an opportunity in the $1.9 trillion COVID-19 relief package that Democrats plan to push through Congress in the coming weeks, most likely without GOP support,” Roll Call reports.

“In an early indication of the attacks to come, the GOP is road-testing messages in battleground districts. A poll… focused on whether Congress should pass legislation encouraging schools to safely reopen and the possibility that aid payments could go to undocumented immigrants.”

“Republicans are making a risky but calculated bet: that voters won’t punish them for opposing a popular $1.9 trillion coronavirus bill,” Politico reports.

“With President Joe Biden and Democrats barely even seeking their input, Republicans are now gambling that there will be more backlash over schools staying closed, the Covid bill’s massive price tag and a partisan process. And with the GOP closing ranks to oppose the aid package, it could become the first pandemic relief plan that garners zero support from Republicans — following a year with five bipartisan bills and more than $3 trillion spent on fighting the virus.”