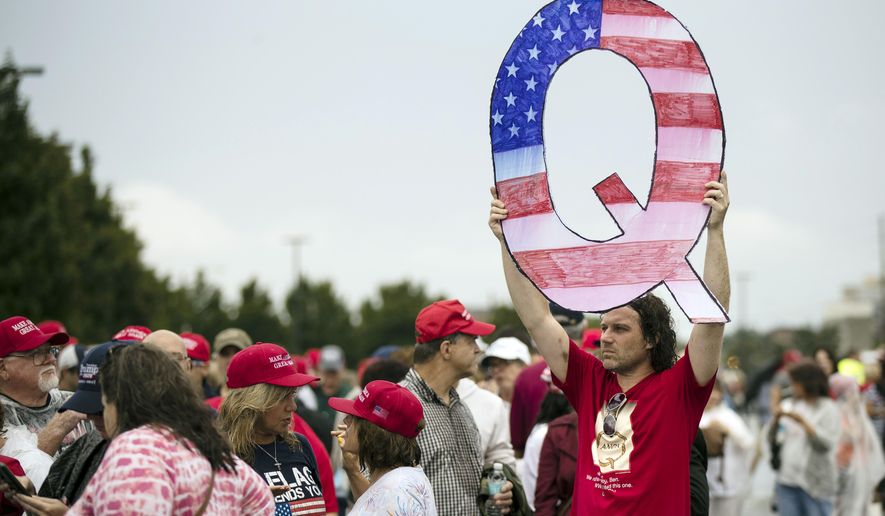 A Suffolk University-USA Today poll found that 46% of Republicans said they would abandon the GOP and join the Trump party if the former president decided to create one. Only 27% said they would stay with the GOP, with the remainder indicating they would be undecided.

When asked by a USA Today/Suffolk poll to describe what happened during the assault on the Capitol on January 6, 58% of Trump voters call it “mostly an antifa-inspired attack that only involved a few Trump supporters.”

That’s more than double the 28% who call it “a rally of Trump supporters, some of whom attacked the Capitol.”

Geoffrey Skelley argues that a major theme for Republicans in 2024 will be asserting that the 2020 election was stolen, due to Republican leaders being “too much invested in the lie now.”

Related from the new USA Today/Suffolk University poll: Only 17% of Trump voters believe that Biden’s election was legitimate.

“The Democratic Party, which continues to move leftward, isn’t a good ideological fit [for Never Trumpers]. Those who want to fight to recapture the GOP from within are vastly outnumbered. Building a third party from scratch requires gigantic sums of money and overcoming a thicket of daunting state laws designed in large part by the two major parties,” Politico reports.

“Even in their diminished state, the Democratic and Republican parties remain the dominant force in politics, with party affiliation tightly tied to voter preferences and legislative voting behavior. And more than 150 years of two-party rule in Washington and the nation’s statehouses have created conditions designed to keep it that way.”

Washington Post: “[South Carolina Senator Lindsay] Graham [visited] the former president’s gilded Mar-a-Lago Club on Sunday to spend two days golfing and dining with Trump. He has spoken to the former president nearly daily since Jan. 6 — more frequently than any of his Republican colleagues in the Senate — and served as an informal adviser to Trump’s defense team during his Senate impeachment trial this month…”

Said Graham: “If he ran, it would be his nomination for the having. I don’t know what he wants to do. Because he was successful for conservatism and people appreciate his fighting spirit, he’s going to dominate the party for years to come. The way I look at it, there is no way we can achieve our goals without Trump.”

Arkansas Gov. Asa Hutchinson (R) told CNN that he would not support former President Trump if he ran for the White House again in 2024, pointing to the deadly riot at the U.S. Capitol on Jan. 6. Said Hutchinson: “I would not support him for reelection in 2024.”

Former President Trump will make his first public speech after leaving office during CPAC next week, CBS News reports. Trump will discuss the future of the Republican Party and conservative movement, and sharply criticize President Biden’s immigration policies. The conference, which is usually held in Maryland, has been moved to Orlando, Florida this year to avoid coronavirus lockdowns.

A new NBC News poll shows that “the composition of the two major political parties is changing, and one massive shift is coming in employment: the kinds of jobs Democrats and Republicans hold.” “There are signs across racial and ethnic demographic groups that Republicans are becoming the party of blue-collar Americans and the change is happening quickly.” “If the movement continues it could have a very large impact on the future of the GOP. Consider the scale of the change overall.”

ALASKA STATE HOUSE — Alaska’s state House finally agreed on how to organize itself with a successful vote on Thursday, but the bipartisan coalition in charge of the chamber still lacks a formal majority and will have to rely on outside support to approve key legislation.

This Democratic-led alliance, known a bit incongruously as the Majority Coalition, now has a membership equal to exactly half the seats in the House: 14 Democrats, four independents, and two Republicans, one of whom, state Rep. Louise Stutes, was elected as speaker just over a week ago. The other, state Rep. Kelly Merrick, provided the decisive vote for Stutes but had initially said she wasn’t joining the coalition, though she’s since come into the fold.

Following the speakership vote, one member of the hardline GOP caucus, state Rep. Sara Rasmussen, announced she would no longer affiliate with her fellow Republicans but would instead serve independently, albeit while retaining her party label. In turn, Democratic state Rep. Geran Tarr left the coalition to also operate on her own after getting bumped out as co-chair of the House Resources Committee.

However, both Tarr and Rasmussen nonetheless voted in favor of the coalition’s preferred committee assignments, allowing them to take effect on a 22-17 vote (one Republican was absent). That step will at last allow lawmakers to begin conducting business, a month after the legislature’s session began. But to pass any future bills—including the all-important state budget—the Majority Coalition will need continued backing from at least one of these two unaffiliated members, or from the Republican caucus.

WISCONSIN GOVERNOR / U.S. SENATOR — Politico reported Friday that Reince Priebus, who served as the first of Donald Trump’s four White House chiefs of staff, is considering a bid against Democratic Gov. Tony Evers. Priebus has not yet said anything publicly, but both the Associated Press  and  WisPolitics.com  soon added that Priebus was also mulling a run for Senate in the event that his fellow Republican, incumbent Ron Johnson, decides to retire.

Johnson seems to be in no hurry to make his plans known, however, and an unnamed source informed the AP that Priebus was “far away from making a decision” about whether to take on Evers. Bauer also notes that Priebus, who has resided in D.C. for a long time, is no longer a registered voter in the state he’d like to lead, which could be a liability at the ballot box.

And if Priebus does run for governor, he’ll almost certainly need to go through a competitive primary before he can take on Evers in this swing state. Badger State politicos view Rebecca Kleefisch, who served as Scott Walker’s lieutenant governor, as all but certain to run. Bauer also reports that Rep. Mike Gallagher, former Rep. Sean Duffy, and lobbyist Bill McCoshen are also thinking about getting in, though there’s no other information about any of their deliberations.

Priebus himself has only been on the ballot once, when he lost a close 2004 race for a state Senate seat around Kenosha. Priebus went on to chair the state party before he waged a successful 2011 bid to unseat his one-time ally Michael Steele as head of the Republican National Committee.

Priebus remained at that post for six years until Donald Trump selected him to become his first chief of staff. Priebus lasted just a little over six months in the White House before being unceremoniously dumped, though he later went on to stump for Trump’s failed re-election campaign.

CINCINNATI MAYOR — Candidate filing closed Thursday for the May 4 nonpartisan primary to succeed termed-out Mayor John Cranley, and Democrats look well positioned to retain control of this office. City Councilman Christopher Smitherman, an independent who has often won with Republican support, had kept observers guessing about his plans until the final day of qualifying, but he ultimately announced that he wouldn’t run.

Two of Smitherman’s Democratic colleagues also bowed out of the race shortly before filing closed. P.G. Sittenfeld had looked like the dominant frontrunner until December, when he was arrested by FBI agents on bribery charges. Sittenfeld maintained his innocence and continued to campaign until Thursday, when he finally dropped out. City Councilman Chris Seelbach, who would have been the city’s first LGBTQ mayor, also left the race on Wednesday.

Nine people ultimately ended up filing, and the Cincinnati Enquirer writes that this is still the largest field since voters began electing mayors in 2001. The top-two vote-getters will advance to the Nov. 2 general election.

The field includes four current elected officials, all of whom are Democrats. The best-known contender to Digest readers is probably Hamilton County Clerk of Courts Aftab Pureval, who lost a high-profile 2018 race against Republican Rep. Steve Chabot in Ohio’s 1st District. Another former Chabot opponent is City Councilman David Mann, who served as mayor twice under the old system where the Mayoral position would be assigned to City Council members on a rotating basis, and was elected to Congress in 1992 before being ousted by the Republican two years later. (Cranley also lost to Chabot in 2006.)

Other Democratic candidates include City Councilman Wendell Young and state Sen. Cecil Thomas, who would each be the second African American elected to this job. The other three Democratic contenders are physicist and businessman Gavi Begtrup, retired firefighter Raffel Prophett, and perennial candidate Kelli Prather. There are also two independents in the race: tech businessman Adam Koehler and Herman Najoli, who took less than 5% of the vote in a November race for Hamilton County commission.

PENNSYLVANIA U.S. SENATOR — State Rep. Malcolm Kenyatta announced Thursday that he would join the Democratic primary for this open Senate seat, and he immediately picked up an endorsement from the American Federation of Teachers. Kenyatta would be the first LGBTQ person of color to serve in the upper chamber, as well as Pennsylvania’s first Black senator. Kenyatta joins Lt. Gov. John Fetterman in the primary, while a number of other prominent Democrats are also considering running to succeed retiring GOP incumbent Pat Toomey.

Kenyatta was elected to a safely blue seat in North Philadelphia at the age of 28, an accomplishment that made him the legislature’s first LGBTQ member of color. He also stood out as a prominent surrogate for Joe Biden during the presidential primary and general election.

On the Republican side, businessman Everett Stern recently entered the contest with considerably less press coverage. Stern is the founder of Tactical Rabbit, which calls itself “a private intelligence agency that provides clients with legal, business, and national security intelligence.” PennLive also writes that Stern, who considered a 2016 primary bid against Toomey, is “little-known to some in top state Republican Party circles.”

However, Stern also was in the news back in 2012 after he served as a whistleblower against his employer, the banking giant HSBC. The Department of Justice went on to level a $1.9 billion fine against HSBC for what PennLive describes as “violating U.S. sanctions for doing business with countries like Iran and North Korea, and breaking terms of the Trading With the Enemy Act and other money-laundering laws.”

Philadelphia Inquirer: “About 19,000 Pennsylvanians have left the Republican Party since Jan 6. That’s a drop in the bucket for a state with more than 8.8 million registered voters, and almost 3.5 million Republicans. But it’s also an unusually high rate of defections: Almost two-thirds of the voters who have switched parties this year left the GOP, compared with a third or less typically.”

“And there are signs of a broader political shift underway. These are often longtime party loyalists, highly engaged voters who cast Republican primary ballots in low-profile, off-year elections… They haven’t changed their political ideologies, they said in interviews. But they’re registering as third-party or independent voters because they believe that their political home, now led by Trump, has changed around them.”

“That raises the prospect of a Republican primary electorate even friendlier to Trump and Trump-allied candidates — something that could have big implications for the party in competitive races for governor and U.S. Senate next year.”

“According to a post-election report provided in advance to NBC News, the party lost its ‘most powerful and competitive advantage’ when it didn’t dispatch volunteers to canvass in person, following the directive of Joe Biden’s campaign after the pandemic hit.”

Said Texas Democratic Party Chair Gilberto Hinojosa: “Our inability to campaign was really devastating for us, especially with our main base. Our main base is Latino voters, and they do not take well to mail and texting contact.”