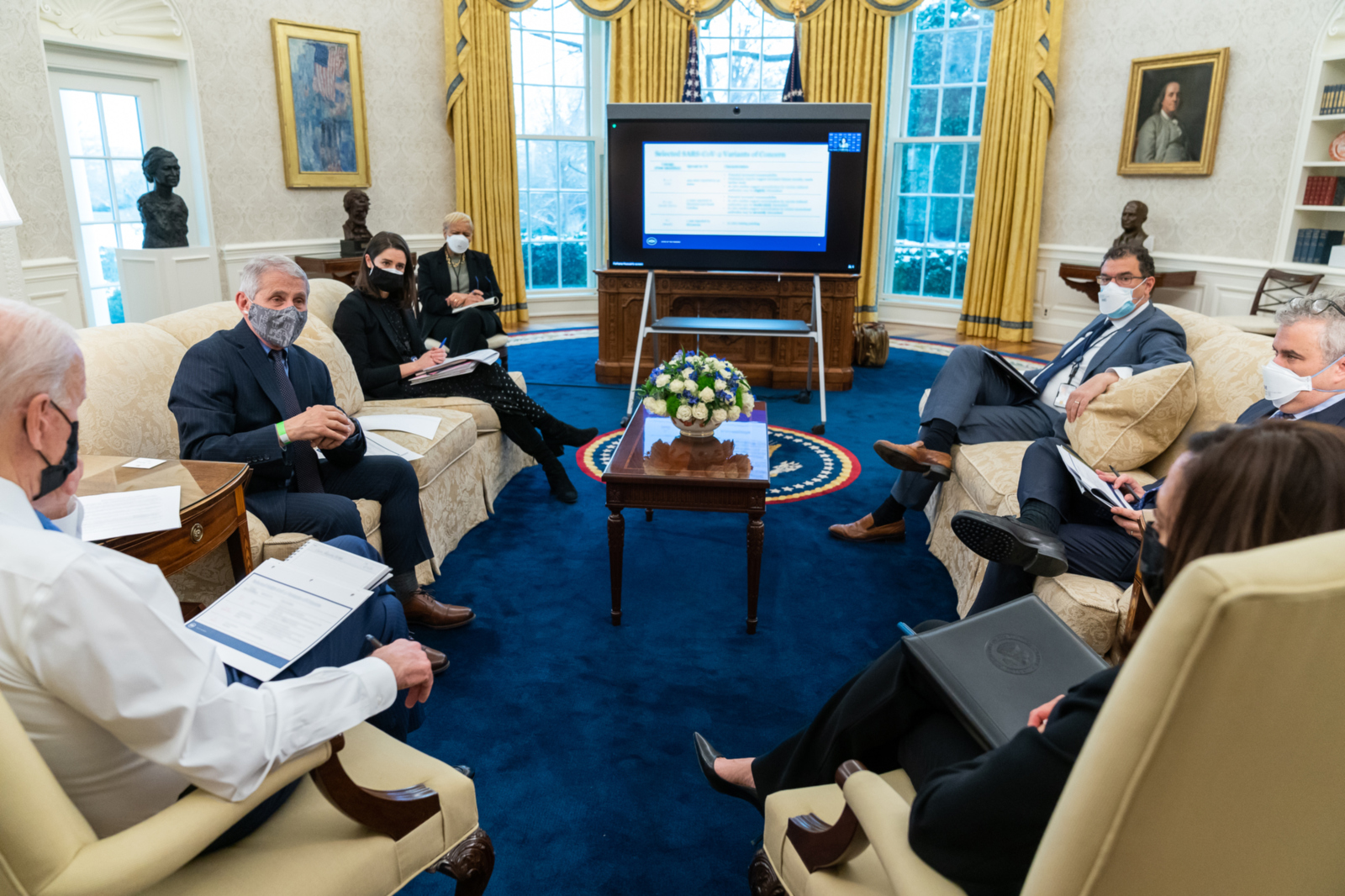 “Republicans are struggling to persuade voters to oppose President Biden’s $1.9 trillion economic rescue plan, which enjoys strong, bipartisan support nationwide even as it is moving through Congress with just Democratic backing,” the New York Times reports.

“Democrats who control the House are preparing to approve the package by the end of next week, with the Senate aiming to soon follow with its own party-line vote before unemployment benefits are set to lapse in mid-March…”

“Republican leaders, searching for a way to derail the proposal, on Friday led a final attempt to tarnish the package, labeling it a ‘payoff to progressives.’”

Financial Times: “If Biden’s coronavirus recovery plans are vindicated, they will demonstrate it is possible to ‘build back better’ from the pandemic and that advanced economies have been overly obsessed with inflation for the past 30 years. It will put government back at the heart of day-to-day economic management.”

“If the plan comes off, it will show that unnecessary timidity in recent decades has let millions suffer unnecessary unemployment, starved many areas of opportunities for improved living standards and widened inequalities.”

“But if the strategy fails, ending in overheating, high inflation, financial instability and the economics of the 1970s, the US experiment of 2021 will go down as one of the biggest own goals of economic policymaking since François Mitterrand’s failed reflation in France in 1981.”

“The Manhattan District Attorney’s Office has subpoenaed a New York City property tax agency as part of a criminal investigation into Donald Trump’s company, the agency confirmed on Friday, suggesting prosecutors are examining the former president’s efforts to reduce his commercial real-estate taxes for possible evidence of fraud,” Reuters reports.

“Along with information already subpoenaed from creditors, the tax agency documents would help investigators determine whether Trump’s business inflated the value of his properties to secure favorable terms on loans while deflating those values to lower tax bills for those same properties.”

“Erik Prince, the former head of the security contractor Blackwater and a prominent supporter of former President Donald Trump, violated a United Nations arms embargo on Libya by sending weapons to a militia commander who was attempting to overthrow the internationally backed government,” the New York Times reports.

“A confidential U.N. report obtained by The New York Times and delivered by investigators to the Security Council on Thursday reveals how Mr. Prince deployed a force of foreign mercenaries, armed with attack aircraft, gunboats and cyberwarfare capabilities, to eastern Libya at the height of a major battle in 2019.”

“South Carolina’s new law — passed by Republican majorities in the S.C. House and Senate — bans most abortions after six weeks, when the law’s supporters say a heartbeat can be detected in the developing fetus.”

Politico: “Even if the California attorney general job doesn’t pan out, several options remain for [Congressman Adam] Schiff, including securing a spot in House leadership when Pelosi and her top deputies finally leave in the coming years. He is frequently mentioned as a possible candidate for speaker, but it could be a messy battle against Rep. Hakeem Jeffries (D-NY) who is considered the frontrunner for the job.”

“There’s also his massive war chest — Schiff raised a staggering $41 million last election cycle, with a significant chunk still remaining… Those reserves could easily be deployed for Schiff to campaign for senator or governor … Allies of the 60-year-old, who’s served in the House for two decades, insist he’s committed to his job leading the Intelligence panel.”

“When the Pennsylvania Supreme Court unanimously rejected a Republican attempt to overturn the state’s election results in November, Justice David N. Wecht issued his own pointed rebuke, condemning the G.O.P. effort as “futile” and ‘a dangerous game,’” the New York Times reports.

“Now Pennsylvania Republicans have a plan to make it less likely that judges like Justice Wecht get in their way.”

“GOP legislators, dozens of whom supported overturning the state’s election results to aid former President Donald J. Trump, are moving to change the entire way that judges are selected in Pennsylvania, in a gambit that could tip the scales of the judiciary to favor their party, or at least elect judges more inclined to embrace Republican election challenges.”

New research in the Journal of Communication: “Using a common ideological measure called DW-NOMINATE, we compared the ideologies of all House members with those featured on cable networks Fox News, CNN and MSNBC, and broadcast networks ABC, CBS and NBC. We studied 46,218 transcripts from 2005 to 2013 to find when representatives spoke on air.”

“We found that the House that’s shown on the news is much more ideologically extreme than the actual House. When we divided representatives into five equal groups by ideology, we found that the most extreme groups on each end of the political spectrum were most often given airtime.”

“This effect is strongest for conservatives on the far right end of the spectrum, though both ideological poles are heard from more often on national cable and broadcast television than moderates.”

Washington Post: “Some churches and Christian ministries with large online followings — as well as Christian influencers on Facebook, Instagram, TikTok, Twitter and YouTube — are making false claims that vaccines contain fetal tissue or microchips, or are construing associations between vaccine ingredients and the devil. Others talk about how coronavirus vaccines and masks contain or herald the ‘mark of the beast.’”

“The rapid spread of this material has triggered debate and concern among U.S. Christian leaders and experts who believe the religious movement against vaccines is growing.”

Los Angeles Times: “Deep into her ninth decade, Feinstein is no longer the politically revered figure she once was. There is talk of mental decline, of selfishly overstaying her time in office and calls for the Democrat to resign … The slow, sad fade is not simply a function of Feinstein’s age — she is 87 — but also the fact that times and the political world have changed and Feinstein, whether unwilling or unable, has failed to change along with them.”

“Bipartisanship, which is to say working with people with whom you may have deep and stark disagreements, is widely disdained these days as a form of retreat and surrender. It is, however, at the core of what Feinstein has always been: a believer in deliberation and political decorum, in practicality and legislative pragmatism… Today, Feinstein is a subject of scorn, considered by many a relic who is well past her prime, who refuses to yield to someone younger, more vibrant, more politically pugnacious and more reflective of California’s kaleidoscopic racial and ethnic diversity. History, with its long view, is likely to be much kinder.”

“DeSantis is facing questions over his decision to provide seniors living in two of Manatee County’s wealthiest ZIP codes with special access to the vaccine.”

“Opposition from Sen. Joe Manchin (D-WV) imperils the nomination of Neera Tanden as President Biden’s budget director but could help two other nominees,” Axios reports.  “Xavier Becerra for HHS and Deb Haaland for Interior have better chances if the confirmation gods get their sacrifice elsewhere.”

“The HHS and Interior hearings, scheduled for next week, will be proxy battles for two of the biggest ideological fights of the Biden presidency — adding a public option to Obamacare, and curtailing oil and gas extraction on federal lands.”