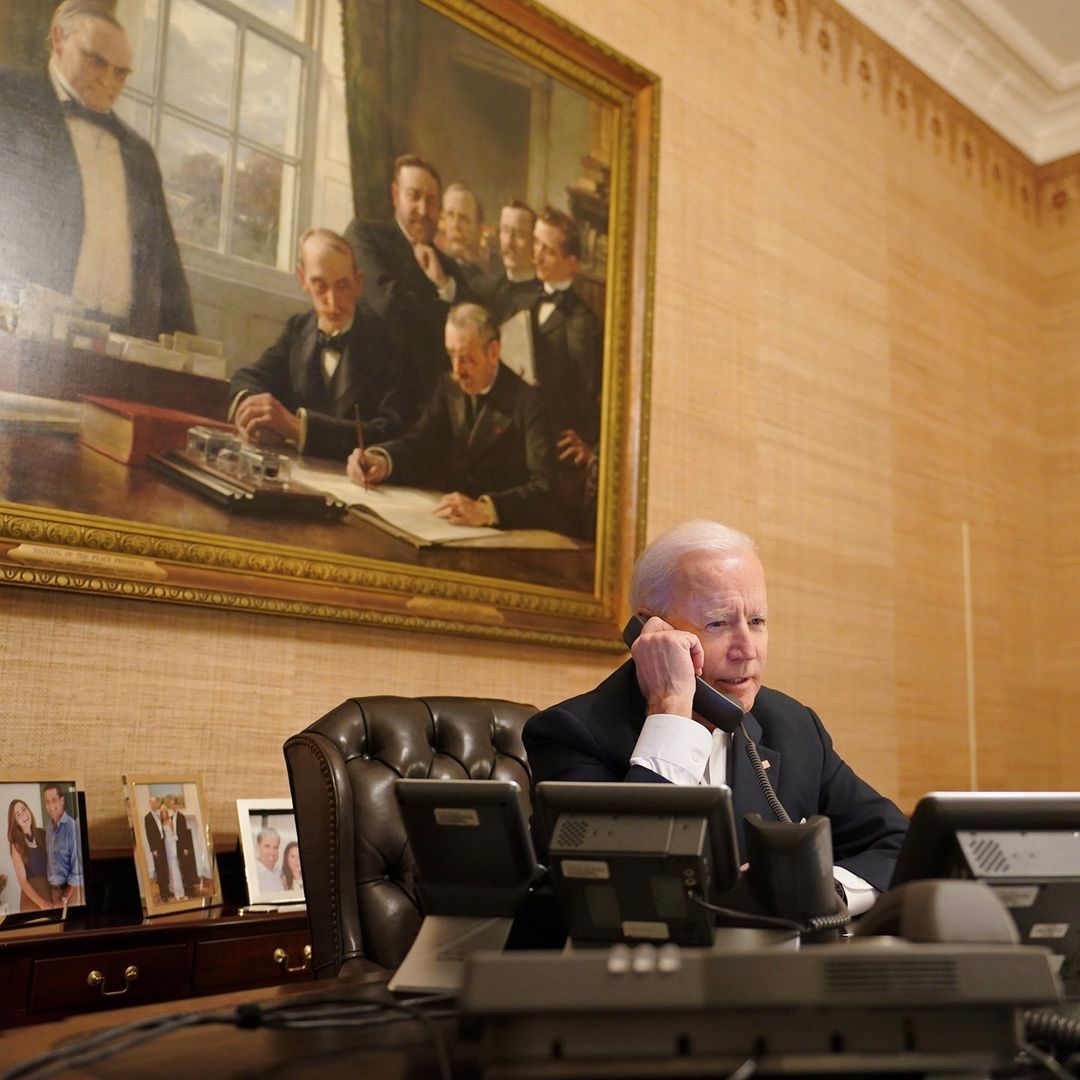 President Biden pledged that the United States is “fully committed” to NATO after four years of President Donald Trump railing against the alliance, the  Washington Post reports.  Biden also warned that “democratic progress is under assault” in many parts of the world, including the United States and Europe.

“America is unreservedly back as the leader of the free world and that is a fantastic thing.”  — U.K. Prime Minister Boris Johnson, quoted by Reuters, refering to an earlier speech by President Joe Biden at the Munich Security Conference.

The Guardian on the official return of the US to the Paris Climate Accord: “While Friday’s return is heavily symbolic, world leaders say they expect the US to prove its seriousness after four years of being mostly absent. They are especially keen to hear an announcement from Washington in the coming months on the US’s goal for cutting emissions of heat-trapping gases by 2030.”

“The wild winter weather this week has been called historic and unprecedented, and John Kerry, U.S. special presidential envoy for climate, wants to stop it from becoming typical,” CBS News reports. Said Kerry: “Well, the scientists told us three years ago we had 12 years to avert the worst consequences of climate crisis. We are now three years gone, so we have nine years left.”

Politico: “European leaders in particular worry that Trumpism remains alive, are skeptical about the results the White House can squeeze from a deeply divided U.S. Congress and aren’t yet sold on meeting the Biden administration’s expectations on China, Russia and trade.”

“There is something refreshingly normal about the Ted Cruz scandal,” Playbook  observes. “The drama of Cruz returning from sunny Mexico — chastened and apologetic for fleeing Texas while 3 million of his constituents remained without power — was a kind of throwback to an era when politicians could be embarrassed.”

“The Trump years were dominated by one figure defined by his inability to be shamed and supporters defined by their unwillingness to be outraged by his behavior.”

“A lot of observers wondered if the age of political scandal was dead — if partisans on both sides were so defined by hatred of their rival political tribe that they would let their own leaders get away with just about anything.”

The Washington Post says the scandal “prompted a Twitter-fueled news cycle that seemed to unite a broken nation.”

The Daily Mail has extensive coverage of the scandal, including 59 photos.

New York Times: “Text messages sent from Ms. Cruz to friends and Houston neighbors on Wednesday revealed a hastily planned trip. Their house was ‘FREEZING,’ as Ms. Cruz put it — and she proposed a getaway until Sunday. Ms. Cruz invited others to join them at the Ritz-Carlton in Cancún, where they had stayed ‘many times,’ noting the room price this week ($309 per night) and its good security. The text messages were provided to The New York Times and confirmed by a second person on the thread, who declined to be identified because of the private nature of the texts.”

Sen. Joe Manchin (D-WV) said he opposes Neera Tanden’s nomination to lead the Office of Management and Budget, saying her past comments are too toxic, CNN reports.

Said Manchin: “I believe her overtly partisan statements will have a toxic and detrimental impact on the important working relationship between members of Congress and the next director of the Office of Management and Budget.”

This could imperil her nomination unless a Republican steps forward to save her in the 50-50 Senate.

If Neera Tanden withdraws from consideration to be President Joe Biden’s budget director, the American Prospect reports that Gene Sperling — who served as head of the National Economic Council for both Bill Clinton and Barack Obama — could take her place.

CNN: “Six US Capitol Police officers have been suspended with pay, and 29 others have been placed under investigation, for their actions in the January 6 riot, a department spokesman said Thursday.”

“One of the suspended officers took a selfie with someone who was part of the mob that overtook the Capitol, according to Rep. Tim Ryan, a Democrat from Ohio. Another wore a ‘Make America Great Again’ hat and started directing people around the building, Ryan said.”

“The Capitol Police said they are investigating the actions of dozens of officers in the Jan. 6 riot by supporters of then-President Donald Trump, ahead of a planned Senate hearing next week featuring testimony from police and security officials,” the Wall Street Journal reports.

“Six more people allegedly affiliated with the right-wing militia Oath Keepers were indicted on charges of planning the Jan. 6 attack on the Capitol, as prosecutors sketch out a portrait of a group preparing to disrupt the certification of President Biden’s election and developing a military-style plan to do so,” the Wall Street Journal reports.

Nine people, including three previously charged, “were accused of attending or scheduling paramilitary trainings in advance of Jan. 6, coordinating their travel to Washington, preparing for the operation with military gear, and moving through the Capitol in military formation.”

“U.S. Capitol Police have told lawmakers that the razor wire fencing around the Capitol should remain in place until at least September due to lingering security concerns related to threats against members of Congress,” CNN reports.

Trump Hotel employees opened up to the Washingtonian “what it was really like behind the curtains of ‘America’s Living Room,’ where right-wing operatives were treated like celebrities and political power determined the seating chart.”

“If you weren’t in the business of Making America Great Again, well, sweetheart, you quickly learned to fake it. Working for the Trump hotel meant putting on a performance every night—right down to the gummy bears and popcorn.”

“The United States took a major step on Thursday toward restoring the Iran nuclear deal that the Trump administration abandoned, offering to join European nations in what would be the first substantial diplomacy with Tehran in more than four years,” the New York Times reports.

“In a series of moves intended to make good on one of President Biden’s most significant campaign promises, the administration backed away from a Trump administration effort to restore United Nations sanctions on Iran. That effort had divided Washington from its European allies.”

Bloomberg: “Iran said the U.S. must first return to the 2015 nuclear deal and lift sanctions if it wants talks with the Islamic Republic, appearing to snub an effort by the Biden administration to begin direct discussions before officially rejoining the accord. Supreme Leader Ayatollah Ali Khamenei called it Iran’s ‘final policy’ on the matter in an Instagram post.”

“The White House is throwing its support behind a global push to distribute coronavirus vaccines equitably, pledging $4 billion dollars to a multilateral effort the Trump administration spurned,” the Washington Post reports.

Politico: “Similar experiences for other New York political figures, only a fraction of which are public knowledge, have become commonplace in recent years and transcend political affiliation and other dividing lines. Many describe receiving angry calls late in the evening, or at other inopportune times, and being unable to get off the phone with New York’s most powerful official. Warnings and browbeating aren’t unusual, say those familiar with the governor’s approach.”

Said one former Democratic official: “Anybody who knows the Cuomo administration knows that threats are what they consider their charm.”

“Now, Cuomo’s cutthroat tactics — already the stuff of legend in Albany’s halls of power — have been on full display as the Democratic governor faces his biggest firestorm in years over his administration’s handling of nursing home fatalities during Covid-19 and his unsparing treatment of lawmakers who have dared to step out against him.”

Dr. Anthony Fauci told The Telegraph that he was relentlessly attacked by Donald Trump and his allies.

Said Fauci: “When it became clear that in order to maintain my integrity and to get the right message I had to publicly disagree with Trump, he did things—or allowed things to happen—that were terrible. Like he allowed Peter Navarro to write an editorial in USA Today saying that almost everything I’ve ever said was wrong. He allowed the communications department of the White House to send out a list to all of the media… about all of the mistakes I’ve made, which was absolute nonsense because there were no mistakes.”

Asked if Trump ever thanked him for his efforts before he left the White House last month, Fauci laughed: “No!”

Jonathan Chait: “Democrats have spent the past 11 years beating back Republican efforts to dismantle, repeal, or sabotage the Affordable Care Act. Over time, the issue has transformed from a Democratic political liability to an advantage. And now that the Democrats control the federal government again, they are moving into a new stage of expanding the law.”

“Obamacare has two major flaws that have hampered its ability to cover the uninsured. One was created by Senate Democrats, and the other was created by Chief Justice John Roberts. The coronavirus-relief legislation begins to fix both these flaws. If it is signed into law, millions of Americans will gain access to health insurance and millions more who have insurance will pay less.”

“Life expectancy in the United States dropped a staggering one year during the first half of 2020 as the coronavirus pandemic caused its first wave of deaths,” the AP reports. “Minorities suffered the biggest impact, with Black Americans losing nearly three years and Hispanics, nearly two years.”

New York Times: “The life expectancy gap between Black and white Americans, which had been narrowing, is now at six years, the widest it has been since 1998.”

The Atlantic: “Even academics who have spent the pandemic delivering ominous warnings have shifted their tone to cautiously optimistic now that vaccination rates are exploding.”

“She said that even with the support already approved, the country still has 9 million people out of work and another 4 million who have dropped out of the labor force. She noted that the Congressional Budget Office has projected that without the Biden plan, it could take the economy until 2024 to get back to full employment. With the extra support, that goal could be achieved by next year, she said.”

“Every elected Democratic state treasurer is calling on Congress to approve the American Rescue Plan, including the provision with $350 billion in state and local aid,” Insider reports.

“Of course, this theory, which has no basis in fact, fails to mention that Texas’ power grid is operated and maintained by Texas, and not part of the two major federally-controlled power grids that service every other state in the country.”

“The multiple crises gripping the US — from a once-in-a-lifetime pandemic to a deadly winter storm that left millions of Texans without heat and potable water — have jeopardized the once-bright futures of three of the nation’s most prominent governors who are trying to defend their judgment, preparedness and oversight to furious residents in three of the biggest states in the country,” CNN reports.

“Republican Greg Abbott and Democrats Andrew Cuomo and Gavin Newsom, who are all up for reelection in 2022, are facing very different problems — and different degrees of blame in what their critics view as lapses in judgment. But the white-hot scrutiny on all three of them underscores the increasing accountability for high-profile, big state governors after four years in which former President Donald Trump espoused a decentralized approach to the nation’s most pressing problems and elevated the responsibility of governors to provide for their people by essentially telling them they were on their own.”

“Former President Donald Trump’s effort to loosen regulations dictating the water-flow levels of many household appliances and fixtures is under threat with the Biden administration announcing it will launch a federal review of several Trump-era rules and regulations governing the topic, in addition to other energy and efficiency-related edicts,” NBC News reports.