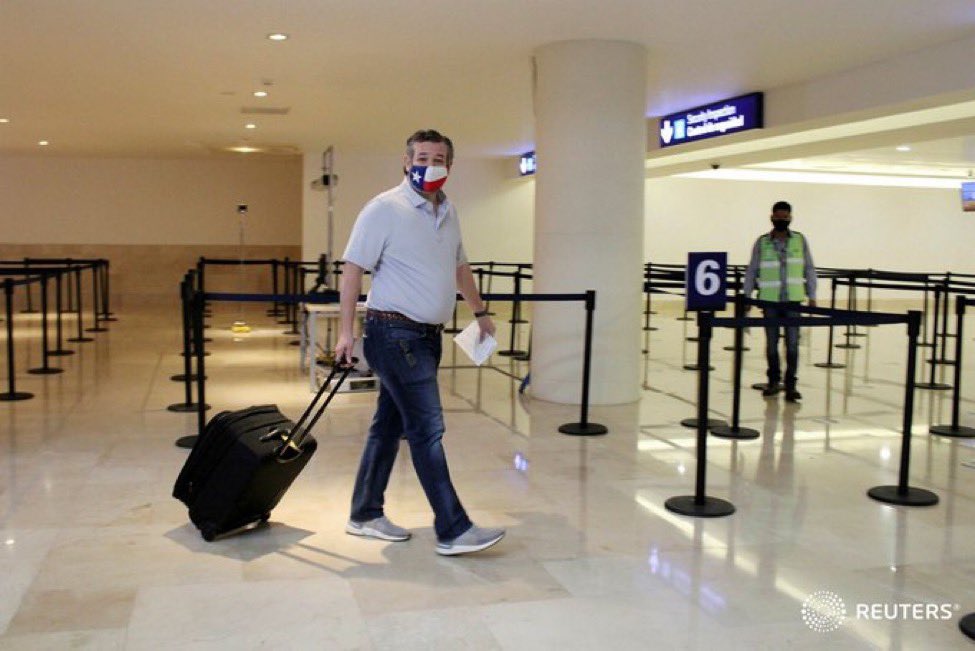 “Photos circulating on Twitter late Wednesday purport to show Texas Senator Ted Cruz on a flight to Cancun, Mexico, during the state‘s historic disaster,”  KSAT reports. “The images show a man with a striking similarity to Cruz in an airport and on a plane. Cruz’s office didn‘t respond to a request for comment but this story will be updated if they do. Other reporters said they had reached out as well but not heard back.”

Fox News confirms what many saw on social media late last night: Sen. Ted Cruz (R-TX) flew to Cancun, Mexico, with his family as Texas dealt with a winter storm that left millions without power.

Although Sen. Ted Cruz (R-TX) suggested in a statement that he was only accompanying his daughters to Cancun “to be a good dad” before he returned, NBC News reports he booked his return ticket from to Texas at 6 a.m. today. Cruz was initially booked to return on Saturday.

You know what makes everyone hate Ted Cruz? It’s not the punchable face he possesses, it’s not the odious lying, it’s not the going on vacation while his constituents literally freeze to death as his wealthy donors profit…. no, it’s the blaming this whole thing on his daughters. If he were any kind of man, he just takes the hit. He would release a statement saying he is sorry and that he used poor judgment, but he is returning now to help out. But instead he blames his daughters. He is a piece of shit. There is nothing redeemable about Ted Cruz.

Texas’ power grid was “seconds and minutes” away from a catastrophic failure that could have left Texans in the dark for months, the Texas Tribune reports.

The FBI and the U.S. attorney’s office in Brooklyn have launched an investigation that is examining, at least in part, the actions of Gov. Andrew Cuomo’s coronavirus task force in its handling of nursing homes and other long-term care facilities during the pandemic, the Albany Times Union reports.

Said De Blasio: “That’s classic Andrew Cuomo. A lot of people in New York state have received those phone calls. The bullying is nothing new. It’s very, very sad. No public servant, no person who’s telling the truth should be treated that way.”

“The Democratic leaders of the New York State Senate are moving to strip Gov. Andrew Cuomo of unilateral emergency powers granted during the pandemic, setting up a remarkable rebuke for the governor from members of his own party,” the New York Times reports.

“The Senate’s measures, which could be voted on as soon as next week, underscore the deepening division between Mr. Cuomo and state lawmakers since the governor admitted to intentionally withholding critical data on virus-related deaths from the Legislature.”

“The moves came even as it emerged that the F.B.I. and the U.S. attorney for the Eastern District of New York had opened an inquiry into the Cuomo administration’s handling of nursing homes during the pandemic.”

“As the Manhattan district attorney’s office steps up the criminal investigation of Donald Trump, it has reached outside its ranks to enlist a prominent former federal prosecutor to help scrutinize financial dealings at the former president’s company,” the New York Times reports.

CNN: “For nearly four months, the [Supreme Court] has refused to act on emergency filings related to a Manhattan grand jury’s subpoena of Trump tax returns, effectively thwarting part of the investigation.”

“The Supreme Court’s inaction marks an extraordinary departure from its usual practice of timely responses when the justices are asked to block a lower court decision on an emergency basis and has spurred questions about what is happening behind the scenes.”

“In an effort to further restrict abortion in Tennessee, two Tennessee lawmakers have introduced legislation that would allow a father to deny an abortion without the pregnant woman’s consent,” the Tennessean reports.

“The controversial law, which critics say doesn’t give women enough time to get an abortion after learning they’re pregnant, was facing a court challenge before the governor had a chance to sign it.”

With the Senate trial in the rearview, former President Donald Trump is now confronting a whole range of other legal dramas during his immediate post-presidency, the Daily Beast reports.

No longer shielded by the considerable legal protection of the Oval Office, Trump has privately bemoaned that his foes are going to be investigating or “suing me for the rest of my life.”

The 14th Amendment bars any public official who swore an oath to protect the Constitution from holding office if they “engaged in insurrection or rebellion” against it or gave “aid or comfort to the enemies thereof.”

Axios: “The bill is unlikely to win needed Republican support, but represents the aggressive immigration priorities of President Biden. It will also kick off the immigration debate on Capitol Hill, which could lead to less sweeping immigration reforms.”

“The bill introduction is likely to spark debate over other immigration bills that touch on parts of Biden’s plan, but are more palatable with a 50-50 split Senate.”

Vox has a fantastic summary of the major aspects of the Covid relief bill that Congressional Democrats are hoping to pass through budget reconciliation in March.

Washington Post: “Biden’s next package could be far pricier than the coronavirus bill. Although plans remain fluid, it’s expected to center on a major infrastructure investment, while also tackling other priorities such as clean energy, domestic manufacturing, and child and elder care. However, as the next must-pass bill in a divided Congress, where legislative opportunities will be scarce, it has unleashed a torrent of other demands, as advocates for issues from climate change to immigration push to get included.”

“The cacophony of competing demands is already threatening to divide Democrats who have largely united behind the coronavirus relief bill.”

“Senior Democratic officials have discussed proposing as much as $3 trillion in new spending as part of what they envision as a wide-ranging jobs and infrastructure package.”

E.J. Dionne: “Here’s the thing about President Biden and his party in 2021: They’re no longer scared.”

“They’re not defensive, or constantly looking over their shoulders, or making preemptive concessions to Republicans.”

“They have learned an essential lesson. Voters always say they like bipartisanship, because most Americans prefer people to be nice to each other and work together. But what they care more about is solving problems and getting things done. If the party in charge fails in that essential duty, endless bend-over-backwards negotiations and a big, inclusive ‘process’ won’t save them.”

“The number of Americans applying for unemployment aid rose last week to 861,000, evidence that layoffs remain painfully high despite a steady drop in the number of confirmed viral infections,” the AP reports.

“The job market has stalled, with employers having added a mere 49,000 jobs in January after cutting workers in December. Nearly 10 million jobs remain lost to the pandemic.”

Washington Post: “Businesses are planning for a future where more people are working from home, traveling less for business, or replacing workers with robots. All of these modifications mean many workers will not be able to do the same job they did before the pandemic.”

“Corporate leaders are more upbeat about the U.S. economy than at any time in the past 17 years,” Bloomberg reports.

“The Conference Board measure of CEO confidence, in collaboration with the Business Council, jumped to 73 in the first quarter. That’s up from 34 a year ago during the height of the pandemic and business closures. A reading above 50 reflects more positive than negative responses.”

“Democrats are bracing for an internal battle over raising the minimum wage to $15 an hour, as they grappled with the political and procedural constraints on reaching a long-held goal of the party’s progressive wing,” the Wall Street Journal reports.

“Raising the minimum wage to $15 an hour, which President Biden’s $1.9 trillion coronavirus relief plan proposes to do by 2025, faces opposition from some Democratic lawmakers and parliamentary hurdles. Democrats cannot afford to lose a single vote in the 50-50 Senate on the relief package, which also calls for sending many Americans a $1,400 direct check, bolstering federal unemployment aid, and offering funds for vaccine distribution and testing.”

GOP lawmakers are criticizing the selection of a retired Lt. General Russel Honoré to lead the U.S. House investigation into the January 6 Capitol attack because of a profane social media post about Missouri Republican Sen. Josh Hawley (R-MO), the Kansas City Star reports.

Wrote Honoré on January 11: “That little peace (sic) of shit with his Yale law degree should be run out of DC and disbarred ASAP.”

Honoré is best known for leading the military’s response to Hurricane Katrina in 2005.

“Given all that is going on in the world, I don’t think putting me on a pedestal is appropriate at this time. I hope, though, that somewhere down the road several years from now or perhaps after I’m gone if you still feel I deserve it, then I’m certain I will stand proud in our great State Capitol as a grateful Tennessean.”  — Dolly Parton, declining the offer of a statue of her in the Tennessee capitol building.