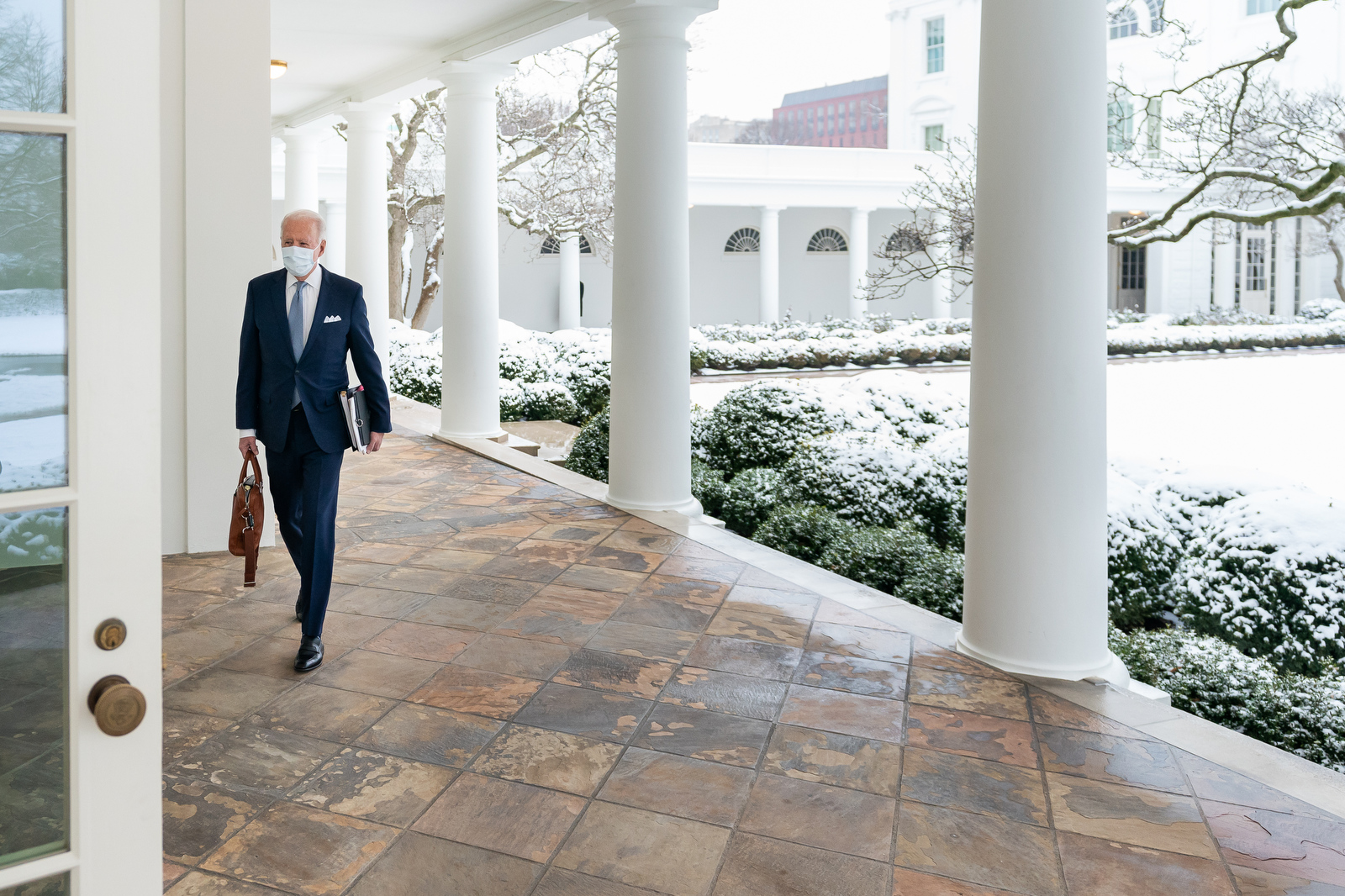 “The end of the Senate impeachment trial of former President Donald Trump sets the stage for his successor to pursue his agenda with a Congress no longer encumbered by the wrenching task of accounting for the storming of the Capitol on Jan. 6,” the Wall Street Journal reports.

“The reality for President Biden, however, is that in pursuing priorities from pandemic relief to measures to address climate change and infrastructure renewal, he will have a difficult time achieving the bipartisanship the Senate showed in the trial that failed to convict Mr. Trump.”

Washington Post: “Republicans in Congress overwhelmingly oppose the relief bill, casting it as bloated and budget-busting, with some heaping particular scorn on a measure to send $350 billion in assistance to states and cities. Should Biden go ahead without their approval, GOP leaders say, it will prove that his mantra of bipartisanship rings hollow.”

“But to many Republicans at city halls and statehouses across the country, the relief package looks very different. Instead of the ‘blue-state bailout’ derided by GOP lawmakers, Republican mayors and governors say they see badly needed federal aid to keep police on the beat, to prevent battered Main Street businesses from going under and to help care for the growing ranks of the homeless and the hungry.”

Washington Post: “Now that Biden has undone the most easily reversible Trump policies, the hard part begins — especially after the impeachment trial hampered early Senate action. While liberals are pushing Biden to do more, goals such as expanding health care and strengthening gun control would probably require new laws, which are much harder to enact.”

“The coming months will tell how much of his predecessor’s legacy Biden can erase and how much of Trump’s imprint, despite his chaotic style, will endure.”

House Speaker Nancy Pelosi said that the Congress “will establish an outside, independent commission to review the ‘facts and causes’ related to the deadly January 6 insurrection at the U.S. Capitol by supporters of Donald Trump in the waning days of his presidency,” The Guardian reports.

Pelosi said the commission would be modeled on a similar one convened after the September 11, 2001, terrorist attack on Washington and New York.

48 Democrats, 2 Independents and 7 Republicans voted to convict Trump as guilty. 43 Republicans voted to acquit, but a reading of their statements post-vote, most notably from Senate Minority Leader Mitch McConnell, finds that many of that 43 did not vote to acquit because they believed Trump was innocent.

Of the 43 senators who voted to acquit, Just Security finds that 13 of them were very critical of Trump on the charges against him.

8 of those 13 senators voted to acquit entirely on the rationale that the Senate does not have the constitutional jurisdiction to try a former president.

5 of those 13 senators voted to acquit, relying on several objections including constitutional jurisdiction, but also did criticize Trump’s actions leading up to the insurrection.

The remaining 30 senators who voted to acquit were either neutral towards Trump or fully supported him.

Overall, there were 70 senators critical of Trump on the merits of the charges against him. While it’s impossible to know if the 13 senators who voted to acquit could ever have been convinced to find him guilty, it’s nonetheless a devastating verdict in the eyes of history.

David Frum: “The 57–43 margin wasn’t enough to convict under the Constitution. It wasn’t enough to formally disqualify Trump from ever again seeking office in the United States. But practically? It will do as a solemn and eternal public repudiation of Trump’s betrayal of his oath of office.”

“Parler, the social network that drew millions of Trump supporters before disappearing from the internet, is back online a month after Amazon and other tech giants cut off the company for hosting calls for violence around the time of the Capitol riot,” the New York Times reports.

“Getting iced out by the tech giants turned Parler into a cause celebre for conservatives who complained they were being censored, as well as a test case for the openness of the internet. It was unclear if the social network, which had positioned itself as a free speech and lightly moderated site, could survive after it had been blacklisted by the biggest tech companies.”

Good. It will be easier to track and arrest all the Trump Terrorists if there are all in one place.

“Some Utah Republicans are hoping to censure Sen. Mitt Romney (R-UT) for voting to convict former President Donald Trump in his second impeachment trial,” the Salt Lake Tribune reports. The censure motion concludes Romney used his “senatorial power and influence to undermine” Trump and claims “Romney appears to be an agent for the Establishment Deep State.”

“The Maine Republican Party could vote by month’s end to censure Sen. Susan Collins over her Saturday vote to convict former President Donald Trump of a Democratic impeachment charge, a move that infuriated many in the conservative grassroots,” the Bangor Daily News reports.

“I voted to convict former President Trump because he is guilty. That’s what the facts demand.”

“I have no illusions that this is a popular decision. I made this decision because Americans should not be fed lies about ‘massive election fraud.’ Police should not be left to the mercy of a mob. Mobs should not be inflamed to disrupt the peaceful transfer of power.”

Politico: “Biden and his aides will continue to use Trump as a foil for the ‘foreseeable future’ as they seek to contrast the two presidents’ policies to build support for the White House’s agenda.”

“Biden’s team learned a lesson from 2009, when President Barack Obama and Biden, then vice president, came to believe that they’d failed to defend their policies forcefully enough against criticisms from Republicans, including former Vice President Dick Cheney. Those criticisms, they believe, contributed to Democrats’ enormous losses in the 2010 midterm elections.”

“Uninsured Americans who want to buy Affordable Care Act coverage have another three months to do so, thanks to an executive order President Joe Biden signed last month,” CNN reports.

A Wall Street Journal editorial urges Republicans to move on from Donald Trump:

“Mr. Trump may run again, but he won’t win another national election. He lost re-election before the events of Jan. 6, and as President his job approval never rose above 50%. He may go on a revenge campaign tour, or run as a third-party candidate, but all he will accomplish is to divide the center-right and elect Democrats. The GOP’s defeats in the two Jan. 5 Georgia Senate races proved that. The country is moving past the Trump Presidency, and the GOP will remain in the wilderness until it does too.”

“Donald Trump’s acquittal at his second impeachment trial may not be the final word on whether he’s to blame for the deadly Capitol riot. The next step for the former president could be the courts,” the AP reports.

“Now a private citizen, Trump is stripped of his protection from legal liability that the presidency gave him. That change in status is something that even Republicans who voted on Saturday to acquit of inciting the Jan. 6 attack are stressing as they urge Americans to move on from impeachment.”

Tim Miller: “So the only way to view McConnell’s deliberations is that he recognizes clearly the fundamental nature of the threat, he saw stopping the insurrection as part of his legacy, he knows that it is Donald Trump who was solely responsible for it, and yet he still cannot bring himself to vote to convict… unless the vote is in private.”

Said Graham: “He is the first president to ever be impeached without a lawyer, without a witness, without an ability to confront those against him and the trial record was a complete joke, hearsay upon hearsay and we’ve opened Pandora’s box to future presidents and if you use this model, I don’t know how Kamala Harris doesn’t get impeached if the Republicans take over the House, because she actually bailed out rioters and one of the rioters went back to the streets and broke somebody’s head open.

He added: “So we’ve opened Pandora’s box here and I’m sad for the country.”

Bring it Lady G. First off, you will embarrass yourself since the story about Harris is not true at all. Second, you will be too busy being indicted in Georgia for election fraud.

Raw Story: “Newly unearthed flight logs show South Dakota Gov. Kristi Noem (R) used a state airplane to travel to right wing political events around the country, a revelation that has state lawmakers questioning whether she violated a state law forbidding political and personal use of the aircraft.”