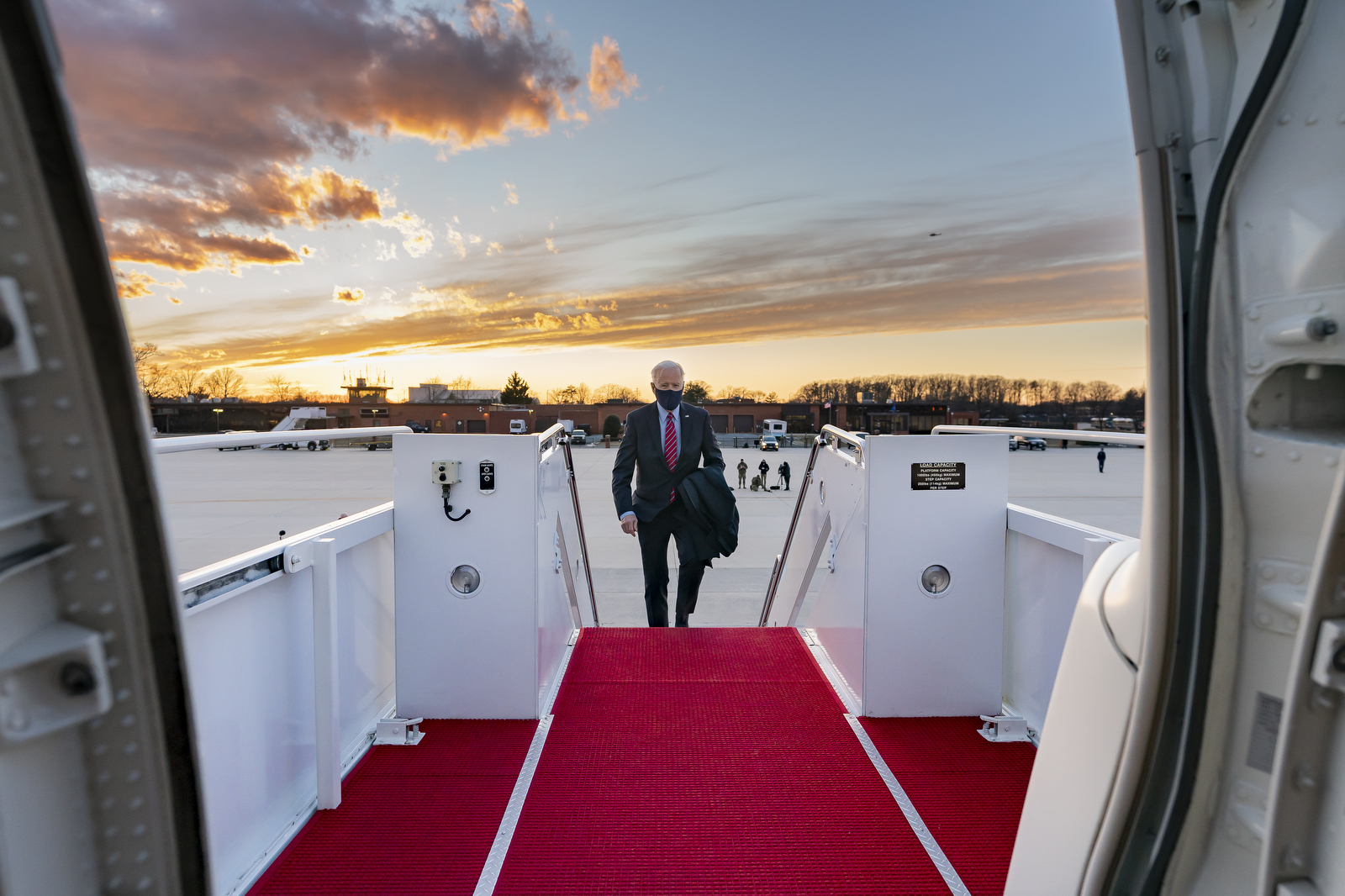 Rep. Jamie Raskin (D-MD) criticized Republicans like Senate Minority Leader Mitch McConnell for “trying to have it both ways” by voting to acquit former President Donald Trump on charges he incited last month’s attack on the Capitol, arguing that history will deem the president responsible nonetheless, NBC News reports.

Said Raskin: “We successfully prosecuted him and convicted him in the court of public opinion and the court of history.”

He added: “He’s obviously a major political problem for the Republican Party, and as long as he’s out there attempting to wage war on American constitutional democracy, he’s a problem for all of us.”

Sen. Chris Coons (D-DE) blamed Senate Minority Leader Mitch McConnell (R-KY) on ABC News for former President Trump’s acquittal in his second Senate impeachment trial. Said Coons: “Once Mitch McConnell made it clear he intended to acquit, even despite the compelling evidence, what the House managers needed wasn’t more witnesses or more evidence, what we all needed was more Republican courage.” He added: “I’m fairly certain there would have been a vote to convict with a secret ballot.”

Raskin said he alone made the decision not to press for new witness testimony, even after the impeachment managers had forced the Senate to vote to allow that very thing, The Hill reports.

Raskin added that he had no contact with President Biden, Vice President Harris or anyone else in the White House before the impeachment managers agreed to a deal with Trump’s defense allowing a new statement to be entered into the record, but no new witness depositions. Said Raskin: “I made the call. So you want to blame somebody it’s me.”

“It could be First Amendment, it could be bill of attainder, it could be due process. I mean all of them are nonsense. I thought that I successfully demolished them at the trial but, you know, there’s no reasoning with people who basically are, you know, acting like members of a religious cult and when they leave office should be selling flowers at Dulles Airport.” — Rep. Jamie Raskin (D-MD), lead impeachment manager, in an interview on Meet the Press.

“What we needed was not more witnesses, but more Senators with spines.” — Rep. Stacey Plaskett, on MSNBC.

Walter Shapiro: “The most intriguing—if typically cynical—performance was Senate GOP leader Mitch McConnell’s. After voting to acquit Trump on dubious constitutional grounds, McConnell then delivered a searing Senate speech. Referring to January 6, McConnell said, ‘There is no question—none—that President Trump is practically and morally responsible for provoking the events of the day.’”

“Of course, McConnell is partly responsible for aiding and abetting Trump for four years. But it is telling that at a moment of Trumpian triumph, he chose to speak in a way designed to defuse the skyrockets at Mar-a-Lago. McConnell’s calculus—and never doubt his abilities at political math—is that the benefits of breaking with Trump far outweigh the price of continued fealty. That and the 7 Republican votes for conviction are the sole bright spots on a dispiriting Saturday.”

Said Graham: “He got a load off his chest, obviously, but unfortunately he put a load on the back of Republicans. That speech you will see in 2022 campaigns.”

For once, Lady G, you are right.

Our Senator Chris Coons did not distinguish himself on Saturday. “The jury is ready to vote. People want to get home for Valentine‘s Day.”— Sen. Chris Coons (D-DE), quoted by Politico, urging the House managers to accept a deal for no witnesses at Donald Trump’s impeachment trial.

Wall Street Journal: “The dramatic conclusion of former President Donald Trump’s second impeachment trial laid bare deep philosophical rifts between Republicans, as GOP senators splintered not only over the question of Mr. Trump’s guilt, but also the future of their party and Mr. Trump’s role in it.”

New York Times: “The vote stands as a pivotal moment for the party Mr. Trump molded into a cult of personality, one likely to leave a deep blemish in the historical record. Now that Republicans have passed up an opportunity to banish him through impeachment, it is not clear when — or how — they might go about transforming their party into something other than a vessel for a semiretired demagogue who was repudiated by a majority of voters.”

“Defeated by President Biden, stripped of his social-media megaphone, impeached again by the House of Representatives and accused of betraying his oath by a handful of Republican dissenters, Mr. Trump nonetheless remains the dominant force in right-wing politics. Even offline and off camera at his Palm Beach estate, and offering only a feeble impeachment defense through his legal team in Washington, the former president continues to command unmatched admiration from conservative voters.”

Jonathan Chait: “Donald Trump limped his way to acquittal in his second impeachment trial, with 57 senators voting to convict him of inciting insurrection. But it is an ominous sign that not only did many of the senators who did vote to acquit base their position on a technicality — Trump was supposedly ineligible for impeachment as an ex-officeholder, as opposed to not guilty of the crime — they conspicuously pointed toward the court system as a venue for further prosecution.”

“This might seem fanciful, or a convenient way for Republicans to evade responsibility. But Trump is facing serious legal exposure.”

David Frum: “If you looked to the U.S. Senate for a full measure of accountability, you did not receive it, of course. Donald Trump, the twice-impeached president, is also a twice-acquitted president. He lives in a palace on the sea, supported by unconstitutional emoluments from foreign governments, unethical payments from the U.S. Treasury to his businesses, and gullible donations from the suckers he duped. Almost half a million are dead from the plague he promised would go away by itself, even as he received the benefit of miracle treatments available only to the most favored few.”

“But if justice failed, democratic self-preservation is working. Trump lost the presidency, and that loss held despite all his attacks on the vote and the counting of the vote. His party split against him on this second round of impeachable offenses. He has lost his immunity to civil suit and his impunity against federal indictment. The world is crashing down upon his head.”

“The impeachment did not prevail. But Trump still lost.”

After the Senate voted to acquit former President Trump, Speaker Nancy Pelosi (D-Calif.) on Saturday ruled out censuring the former president — an idea that several Republicans had floated in recent days,” The Hill reports.

She added: “Oh, these cowardly senators who couldn’t face up to what the president did and what was at stake for our country are now going to have a chance to give a little slap on the wrist?”

“Former President Donald Trump has privately voiced concern in the last two weeks about whether he could face charges as a result of the January 6 riot he’s accused of inciting,” CNN reports.

“New York prosecutors are investigating financial dealings around some of Donald Trump’s signature Manhattan properties, extending the known range of the criminal probe of the former president and his company,” the Wall Street Journal reports.

CNN: This is Trump’s heaping list of legal problems post-impeachment.

Aaron Blake: “The overriding reason for Trump’s acquittal was the alleged unconstitutionality of the proceedings. Republicans who have raised concerns about Trump’s actions or have declined to vouch for him have repeatedly signaled this would be why they vote against conviction. McConnell after the vote issued a damning indictment of Trump, suggesting he had indeed incited the attack, which others including Sen. Shelley Moore Capito (R-WV) echoed even while voting against conviction ‘solely’ on constitutional grounds.”

“Those statements reinforce just how bad even Trump’s allies decided his conduct was, and they shouldn’t be glossed over.”

“But it’s also the definition of a technicality — and it arguably doesn’t hold up.”

NBC News: After acquitting Trump, McConnell slams him for a “disgraceful dereliction of duty.”

Playbook: “Forty-three Senate Republicans voted to acquit Trump, but few defended him when they announced their votes. Instead, they cited process arguments and said impeaching an ex-president is unconstitutional, which even many conservative attorneys dispute. In short, GOP senators passed up an opportunity to put Trump away for good because their base still loves him — and they fear the base. Will they regret this in a few months or years?”

“The British medical journal the Lancet published a damning assessment of Donald Trump’s presidency and its impact on Americans’ health, concluding that 40% of the nearly 500,000 Covid-19 deaths in the U.S. over the past year were avoidable,” Slate reports.

“The journal came to the conclusion by comparing the U.S. health outcomes on the coronavirus — the country leads the world in Covid deaths and confirmed cases with more than 27 million — with the weighted average of other G-7 nations. So it’s not a wildly abstract conclusion to draw: the U.S. could have saved hundreds of thousands of lives if it had just performed similarly to its economic peers.”

Former President Trump thanked his defense team and supporters in the Senate who voted to acquit him on Saturday, and promised that his “movement to Make America Great Again has only just begun,” Axios reports.

“Trump’s comments came in a statement issued moments after his second acquittal. He had closely watched the trial from Mar-a-Lago with his former social media director, Dan Scavino, and other advisers, and even directed his legal team ahead of their closing arguments on Friday.”

Associated Press: “Now acquitted in his second Senate impeachment trial, Trump is preparing for the next phase of his post-presidency life. Feeling emboldened by the trial’s outcome, he is expected to reemerge from a self-imposed hibernation at his club in Palm Beach, Florida, and is eyeing ways to reassert his power.”

“But after being barred from Twitter, the former president lacks the social media bullhorn that fueled his political rise. And he’s confronting a Republican Party deeply divided over the legacy of his jarring final days in office, culminating in the Jan. 6 storming of the Capitol. Searing video images of the day played on loop during his impeachment trial, which ended Saturday.”

George Will: “The first of this century’s national traumas is denoted by two numbers: 9/11. One purpose of, and a sufficient justification for, the second impeachment of the 45th president was to inscribe this century’s second trauma in the nation’s memory as: 1/6.”

“Although not nearly as tragic as 9/11 in lives lost and radiating policy consequences, 1/6 should become, as its implications percolate into the national consciousness, even more unsettling. Long before 9/11, Americans knew that foreign fanaticisms were perennial dangers. After 1/6, Americans know what their Constitution’s Framers knew: In any democracy, domestic fanaticisms always are, potentially, rank weeds that flourish when fertilized by persons who are as unscrupulous as they are prominent.”