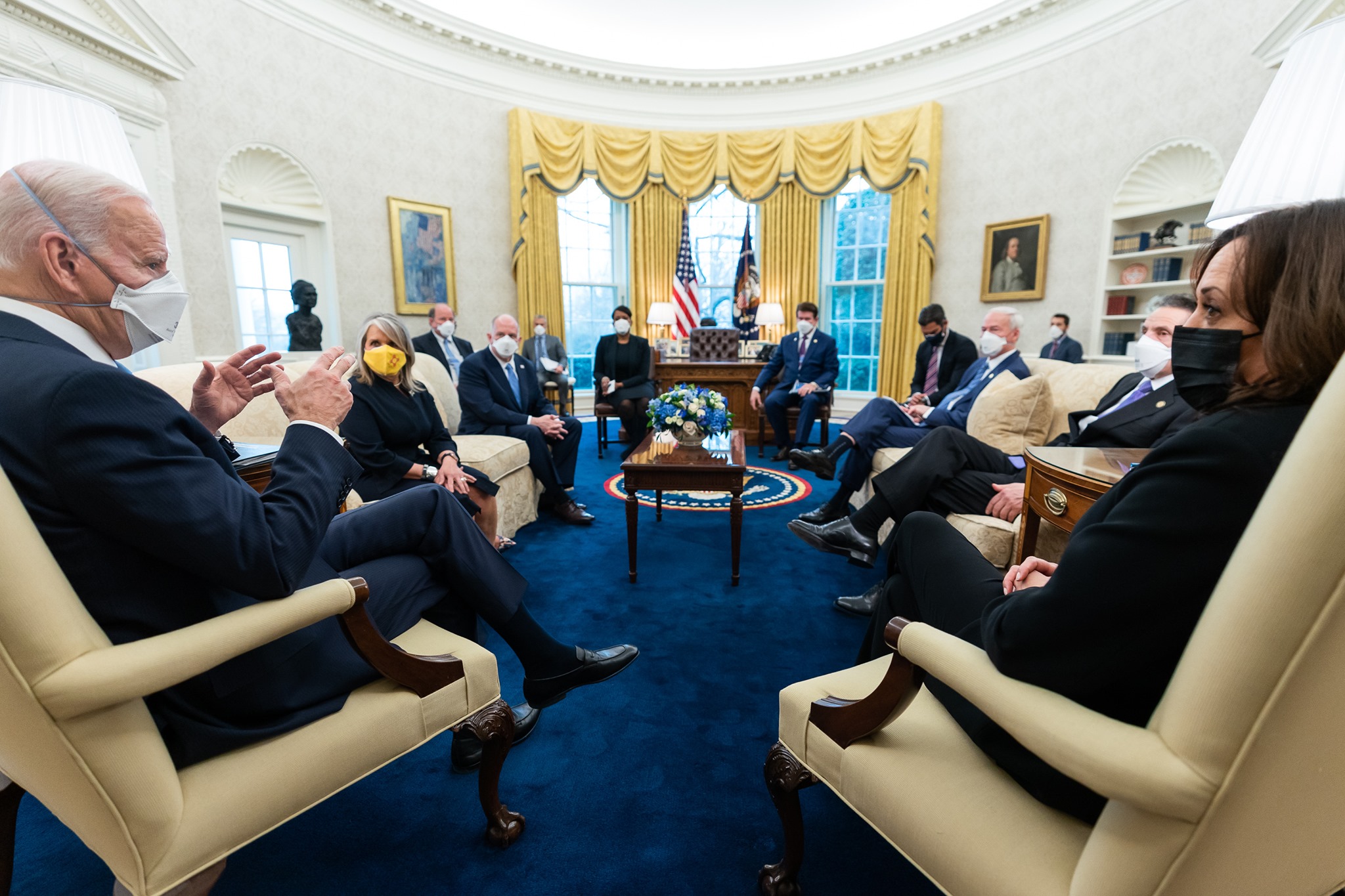 So yesterday was a day. A roller coaster of emotions, excitement and then disappointment and anger and then resignation and resolve.

First, the big headline. The U.S. Senate voted with a large bipartisan majority of 57-43 to convict Donald Trump of inciting the insurrection at the U.S. Capitol on January 6, 2021. However, that falls 10 votes short of the 67 votes required to formally convict under the Constitution. The Republicans voting with Democrats to say Trump was guilty of the charges: Richard Burr, Bill Cassidy, Susan Collins, Lisa Murkowski, Mitt Romney, Ben Sasse and Pat Toomey.

The day started off with a surprise: The House managers asked the Senate to subpoena and depose Rep. Jaime Herrera Beutler (R-WA), who confirmed on Friday night that House Minority Leader Kevin McCarthy (R-CA) told her that Trump had sided with the mob during the riot.

“In an expletive-laced phone call with House Republican leader Kevin McCarthy while the Capitol was under attack, then-President Donald Trump said the rioters cared more about the election results than McCarthy did,” CNN reports. Said Trump: “Well, Kevin, I guess these people are more upset about the election than you are.”

“McCarthy insisted that the rioters were Trump’s supporters and begged Trump to call them off.”

“A furious McCarthy told the President the rioters were breaking into his office through the windows, and asked Trump: ‘Who the fuck do you think you are talking to?’”

The Senate voted 55 to 45 to allow the House impeachment managers to subpoena witnesses. The Republican senators who joined Democrats in approving witnesses: Susan Collins, Lindsey Graham, Lisa Murkowski, Ben Sasse and Mitt Romney. Graham originally voted “no” but changed his vote to “yes” after the roll call.

What happened next is unclear now but will become clearer in the next few days as we hear from the Senators and Managers. My guess is McConnell and other Trump fire breathers threatened to withdraw unanimous consent for the Senate to handle other business for as long as the Impeachment Trial continued. Faced with a choice to call Beutler and possibly other witnesses in person and then have the Biden Agenda, Cabinet and Judicial nominations and COVID relief grind to a halt versus entering Beutlers’ statement into the evidentiary record as a verified stipulation of facts and then moving on to Closing Arguments, the House Managers and Senate Dems chose the latter.

I know many on Twitter were upset, but I think it was the correct political call. People want COVID relief and vaccines as soon as possible. Democrats have to deliver that.

Sources close to former President Donald Trump are “floored” by what just happened in the impeachment trial, ABC News reports. The words being used: “Stunned,” “Stupefied” and “Digesting this.” Another report says there is “complete panic” on the Trump team.

Johnson turned to Romney and was visibly upset with him, even pointing at him once and saying, “I blame you.”

Donald Trump had to call Schoen to get him to rejoin the team.

“Senate Minority Leader Mitch McConnell has told GOP colleagues in a letter that he will vote to acquit Donald Trump in the former president’s impeachment trial,” Politico reports.

“McConnell’s announcement ends a long period of silence over whether he would consider convicting Trump for incitement of insurrection and could pave the way for many other Republicans to follow in acquittal.”

“It’s not lost on historians that Donald Trump’s impeachment trial acquittal will fall on Presidents’ Day weekend, a holiday celebrating the examples set by America’s first president, George Washington, and Abraham Lincoln, who held the republic together through civil war and ended slavery,” Axios reports.

“Through his repeated efforts to overturn the election, Trump put the country through one of the toughest tests of democracy it has ever faced. Historians say his expected acquittal on a charge of inciting the Jan. 6 insurrection will have consequences we are only beginning to understand — and they’ll be felt for years.”

“The Biden administration is planning Friday to wipe out one of the core health policies of the Trump era, taking actions that will immediately rescind permission for states to compel poor residents to work in exchange for receiving Medicaid benefits,” the Washington Post reports.

“Federal health officials will withdraw their predecessors’ invitation to states to apply for approval to impose such work requirements and will notify 10 states granted permission that it is about to be retracted.”

“An Israeli healthcare provider that has vaccinated half a million people with both doses of the Pfizer vaccine says that only 544 people — or 0.1% — have been subsequently diagnosed with the coronavirus, there have been four severe cases, and no people have died,” the Times of Israel reports.

Axios: Why vaccine production is taking so long.

Facebook has been “helping” law enforcement identify people who posted photos of themselves at the Jan. 6 riots at the U.S. Capitol, “even after the attack was over,” Yahoo News reports.

Former Vice President Mike Pence has “no plans to condemn Trump or to speak out during the Senate impeachment trial”, despite the near miss with rioters Pence experienced on January 6, the Washington Post reports.

“He is still operating from a playbook of obsequiousness that has become second nature — never airing grievances publicly, and delivering his often rose-colored counsel to Trump only in private, one-on-one settings.”

CNN: “Military officials overseeing the authorization process to launch nuclear weapons were unaware on January 6 that then-Vice President Mike Pence’s military aide carrying the ‘nuclear football’ was potentially in danger as rioters got close during the violent Capitol insurrection, according to a defense official.”

“US Strategic Command became aware of the gravity of the incident after seeing a video played at the Senate impeachment trial Wednesday showing Pence, his Secret Service agents and a military officer carrying the briefcase with classified nuclear launch information running down a flight of stairs inside the Capitol to get to safety.”

The United Kingdom’s economy shrank by 9.9% last year amid the pandemic lockdowns, the worst since modern records began, and only beaten by the Great Frost of 1709, the Guardian reports.

A St. Louis Post-Dispatch editorial blasted Sens. Roy Blunt (R-MO) and Josh Hawley (R-MO) over their handling of former President Trump’s impeachment trial, calling it an “embarrassment to the state.”

Trump-allied lawyer and conspiracy theorist Lin Wood says he’s representing Sidney Powell in a $1.7 billion defamation lawsuit filed against her by Dominion Voting Systems, ABC News reports.  Said Wood: “Get ready to rumble, Dominion. You made a mistake suing Sidney. You are going to pay a heavy price.”

House Minority Leader Kevin McCarthy (R-CA) admitted to the Los Angeles Times that he attended his son’s largely maskless wedding during a coronavirus surge in California on December 5 — the same day he attacked Gov. Gavin Newsom (D) for attending his own maskless party at the exclusive French Laundry restaurant.

McClatchy: “Discussions in the administration over potential travel restrictions do not target a specific state but focus on how to prevent the spread of variants that appear to be surging in a number of states, including Florida and California.”

“Two federal government officials underscored that no policy announcements are imminent, and that any move to restrict travel or impose new health measures would be taken in partnership with state and local governments.”

Secretary of State Antony Blinken’s first international trips will be in mid-to-late March, CNN reports.  “State Department officials are eyeing meetings with Blinken’s NATO counterparts in Brussels and a visit to the Asia Pacific as the secretary’s first stops.”

The State Department spent more than $10,000 in taxpayer funds over two years for engraved pens handed out to guests at former Secretary of State Mike Pompeo’s “Madison Dinners,” during which the secretary and his wife routinely hosted GOP donors and conservative media figures, The Hill reports.

CNBC reports the dinners had raised concerns among some State Department officials, who worried that the “events were essentially using federal resources to cultivate a donor and supporter base for Pompeo’s political ambitions.”

“Late last year, Texas Attorney General Ken Paxton (R) fired multiple senior aides who accused him of accepting a bribe. A court filing reveals for the first time what four of those aides believe Paxton received in exchange for helping a donor with his business affairs,” the Texas Tribune reports.

“An updated version of a lawsuit filed by the four whistleblowers claims that Austin real estate developer Nate Paul helped Paxton remodel his house and gave a job to a woman with whom Paxton allegedly had an affair.”

“President Biden hasn’t put any Republicans in his Cabinet, but a move like this would symbolize a return to the Truman-era adage that partisan politics stops ‘at the water’s edge.’”