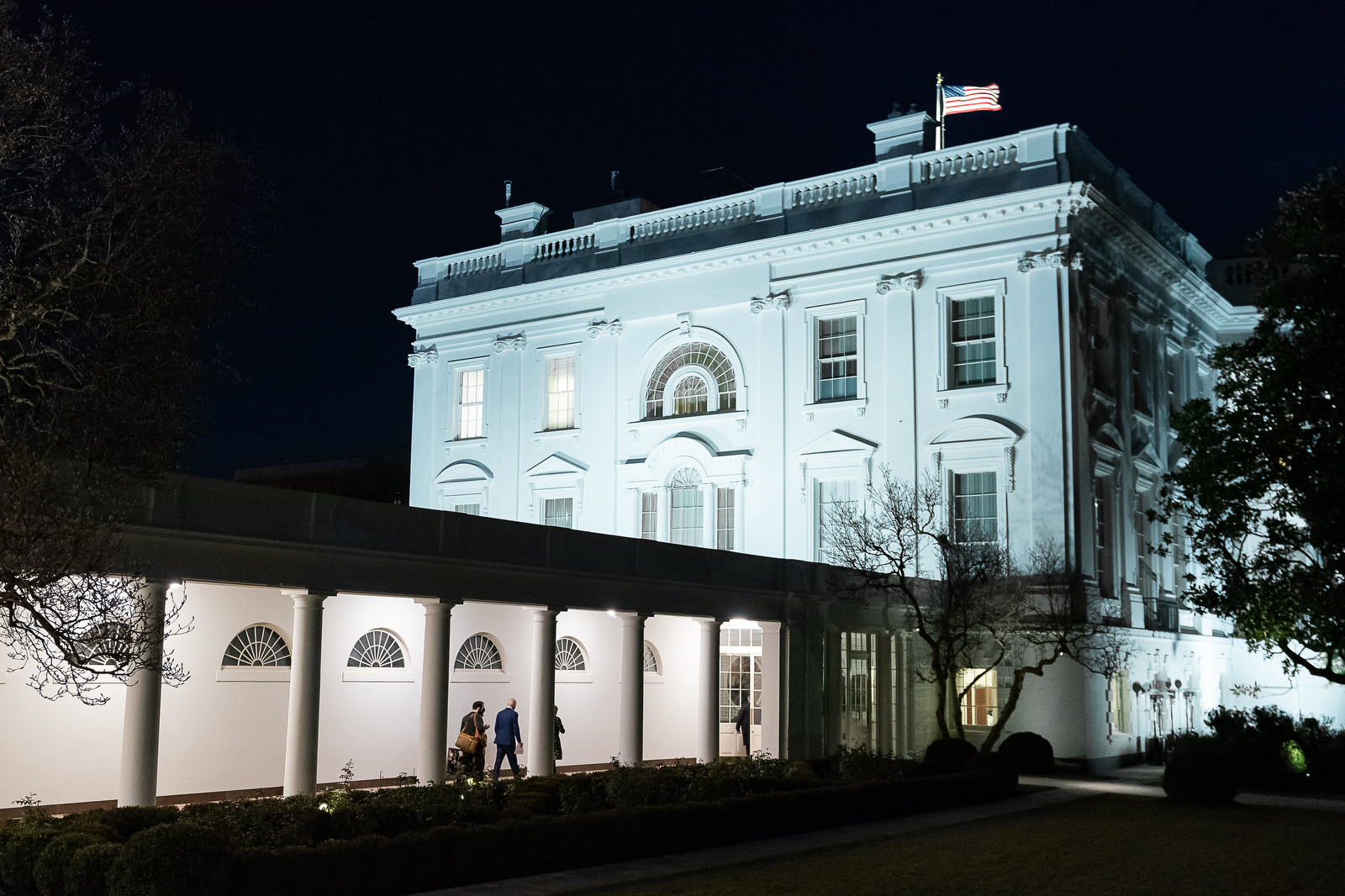 Trump’s legal team, which is neither legal nor a team, concluded its defense, accusing House impeachment managers of “political vengeance” and calling Trump’s second impeachment trial “a politically motivated witch hunt.” Trump’s team spent two hours and 32 minutes of the 16 hours allotted to present a defense, calling Democrats’ allegations that Trump incited the Capitol riot “patently absurd” and that his calls for supporters to “fight” on his behalf “ordinary political rhetoric” that fell short of the legal standard for incitement.

“No thinking person could seriously believe that the president’s January 6 speech on the Ellipse was in any way an incitement to violence or insurrection,” Michael van der Veen, one of Trump’s attorneys, said. Trump’s defense then showed a selectively edited video of Democrats using the words “fight” or “fighting” in political speeches. Trump’s other lawyer, Bruce Castor, echoed complaints of “cancel culture,” saying “Let us be clear: This trial is about far more than President Trump. It is about silence and banning the speech the majority does not agree with. It is about canceling 75 million Trump voters and criminalizing political viewpoints.” And, finally, Trump lawyer David Schoen complained about “the hatred, the vitriol, the political opportunism that has brought us here today.” He blamed Trump’s impeachment on “hatred, animosity, division, political gain – and let’s face it, for House Democrats, President Trump is the best enemy to attack.”

“As the Trump defense made its argument on Friday, Republicans privately estimated between 5 and 10 of their senators are seriously weighing conviction. There’s no official whip count, and the matter is not being discussed at party meetings, leaving many in the 50-member conference to only guess at their colleague’s inclinations.”

Sen. Bill Cassidy (R-LA), who expressed doubts about former president Donald Trump’s impeachment defense team and suggested he might ultimately vote to convict him, was seen in the Capitol on Friday holding the draft of a statement indicating he planned to acquit Trump, the Washington Post reports.

“Senate Republicans, including those who do not plan to vote to convict former President Trump, say this week’s impeachment trial has effectively ended any chance of him becoming the GOP presidential nominee in 2024,” The Hill reports.

“From the viewpoint of some Republican senators, the compelling case presented by House prosecutors carries a silver lining: It means they likely won’t have to worry about Trump running for president again in three years, while at the same time eroding his influence in party politics more generally.”

Playbook: “McConnell regards himself as a proud institutionalist. It’s hard to tell what that means for McConnell in this moment. Does he see conviction as a worthy punishment for a president who inspired an attack on a co-equal branch of government? If so, maybe it’s not such a long shot. Or does ‘protecting the institution’ mean acquitting Trump, because a post-presidential impeachment is unconstitutional in McConnell’s view?”

“There are complicating factors McConnell is surely taking into account as he makes his decision: A vote to convict could make winning back the Senate in 2022 more difficult. It might also trigger calls from the GOP base for McConnell to step aside as leader, forcing his own members to choose between him and their voters.”

“Still, even McConnell’s closest advisers admit they have no idea what he’ll do. Senate Republicans close with him say they’re genuinely in the dark — though they predict he will acquit. McConnell has said little, maintaining his poker face throughout the impeachment managers’ presentations, just as he did during the last impeachment. One reporter said he’s looked like a statue throughout the trial, hands folded in his lap and listening intently.”

Ted Olson, who served as assistant attorney general for Ronald Reagan and solicitor general for George W. Bush — told the National Law Journal that he is now backing impeachment of President Trump.

Said Olson: “This is not just Jan 6. Trump has been attempting for weeks to convince the American public—and duly elected and appointed election officials—that the election was a fraud and was stolen from him, in the face of irrefutable evidence and numerous judicial opinions to the contrary. This was a constant and fraudulent effort to undermine the integrity of American institutions and processes. It culminated, of course, in the violence and lawlessness on Jan. 6.”

He added: “I haven’t resolved yet what I plan to do, but certainly do not plan to contribute financially to or support candidates or committees who do not pass the test of character presented by the Senate’s vote on the impeachment trial.”

“Federal health and education officials urged the nation’s elementary and secondary schools on Friday to reopen safely as soon as possible, saying they can operate by strictly adhering to safety precautions to reduce the risk of Covid-19 transmission in classrooms and in their communities,” the Wall Street Journal reports.

“Members of Congress have been falling over themselves to praise the bravery of the Capitol Police since the attack on Jan. 6,” BuzzFeed News reports. “But behind the scenes, Capitol Police have been casting ballots in a vote of no confidence in their management.”

New York Times: “The Capitol assault resulted in one of the worst days of injuries for law enforcement in the United States since the Sept. 11, 2001, terrorist attacks. At least 138 officers — 73 from the Capitol Police and 65 from the Metropolitan Police Department in Washington — were injured, the departments have said. They ranged from bruises and lacerations to more serious damage such as concussions, rib fractures, burns and even a mild heart attack.”

Jonathan Bernstein: “I thought the House managers and the Senate Democratic majority were making a big mistake by failing to take the time to gather testimony from witnesses before the trial — either in a special committee, or just by taking videotaped depositions as was done during Bill Clinton’s impeachment trial.”

“As it turned out, for the most part the evidence the managers presented was vivid and persuasive in most places. But there was one big exception: Trump’s actions during the insurrection. For that, the managers had to rely on news sources that were neither convincing nor comprehensive. Did Trump really revel in the riot? To what extent was he involved in efforts to secure the Capitol? Did people have to work around him? I don’t know if definitive answers to those questions would change anything, but in my view we don’t have full answers to any of them. It’s a real failure of what was otherwise a very good job by the House managers.”

“That said: No senator has voted yet. Witnesses could still come forward on their own and provide news interviews, or even just on-the-record statements, of what they know. It sure seems to me that anyone with direct evidence, whether it helps or harms Trump, should spill the beans now.”

Wall Street Journal: “Economists on average expected gross domestic product to expand nearly 4.9% this year, measured from the fourth quarter of the prior year, an improvement from their 4.3% forecast in January. They cited the distribution of Covid-19 vaccinations and the prospect of additional fiscal relief from Washington for the brightening outlook.”

“The Biden administration on Friday announced plans for tens of thousands of asylum-seekers waiting in Mexico for their next immigration court hearings to be allowed into the United States while their cases proceed,” the AP reports.

Peggy Noonan: “The second impeachment trial of Donald Trump has been a rout for the pro-impeachment side. They made the case through time-stamped videos and close argumentation, and their timeline linked in an undeniable way the statements of the president on 1/6 and the actions of the rioters who stormed the Capitol. Democratic floor managers were at their best when they were direct, unadorned, and dealt crisply with information and data, as they did most of the time. They were less effective when they employed emotional tones to move the audience. Here is a truth: Facts make people feel. People are so unused to being given them. They’re grateful for the respect shown in an invitation to think.”

“Congress was riveted; journalists were riveted. Was America? Did it watch? We’ll find out the ratings and in time get a sense of what people felt was worth absorbing. Did the proceedings have the power to break through as anything other than a partisan effort? I don’t know, but I suspect so. In the pandemic people are glued to their screens. Nothing they saw—nothing—would make them admire Mr. Trump more.”

New York Times: “As top Democrats continued to push a $1.9 trillion economic aid package through the House, some lawmakers and aides to President Biden raised the prospect of borrowing even more money to finance the president’s next set of spending plans, on infrastructure, buoyed by new projections that showed the nation’s fiscal picture was not as dire as officials feared in the fall.”

A key line on the administration’s thinking on infrastructure: “Mr. Biden proposed tax increases to pay for those plans during the campaign, but in recent days, some of his economic aides have hinted privately that some or all of the infrastructure package could be deficit financed.”

Politico: “Over the past month, the U.S. Chamber of Commerce has taken a series of steps that have enraged its traditional Republican allies. It applauded much of President Joe Biden’s $1.9 trillion plan to Covid relief bill; cheered Biden’s decision to rejoin the Paris climate agreement; backed the former leader of the liberal Center of American Progress, Neera Tanden, for Office of Management and Budget director; and expressed openness to raising the minimum wage, though not to $15 an hour.”

“That’s left the Chamber, a K Street institution known for its bruising battles with past Democratic administrations, occupying an increasingly lonely political center, caught between angry Republicans who feel the trade group has abandoned them and Democrats who are pursuing policies anathema to many of their members.

Sen. Kyrsten Sinema (D-AZ) told Politico that she does not support using the Covid-19 relief bill to increase the federal minimum wage.

Said Sinema: “What’s important is whether or not it’s directly related to short-term Covid relief. And if it’s not, then I am not going to support it in this legislation. The minimum wage provision is not appropriate for the reconciliation process. It is not a budget item. And it shouldn’t be in there.”

The Atlantic: “Soon after the November election, a business colleague of Donald Trump’s close ally Corey Lewandowski offered a whistleblower and convicted ex-banker an expensive deal: In exchange for a $300,000 fee up front—plus another $1 million if successful—the two men would push the then-president for a pardon.”