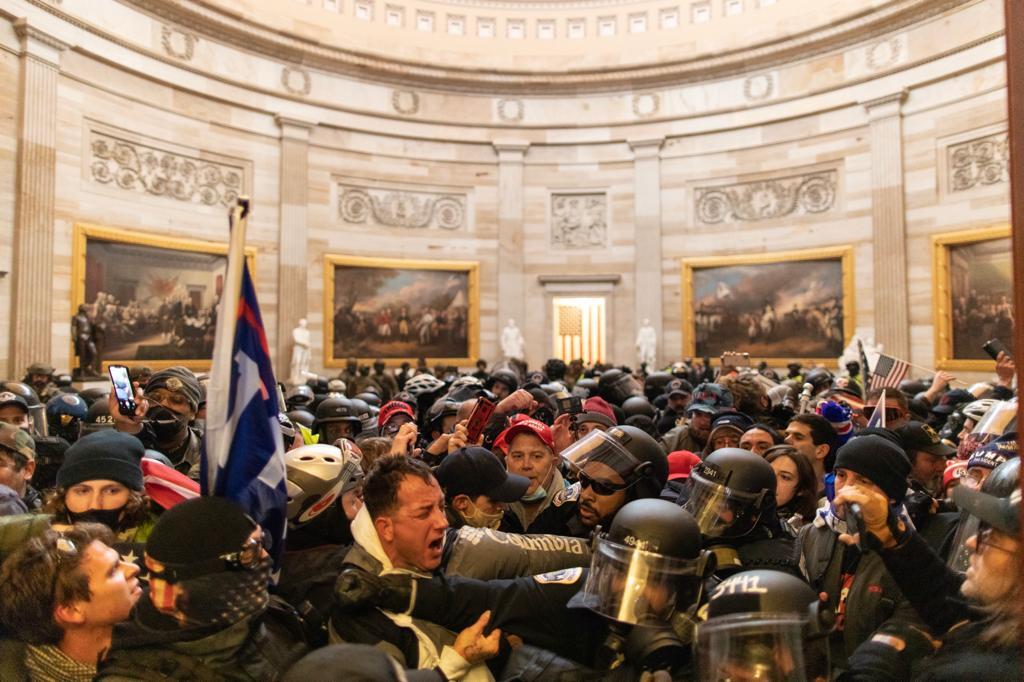 The U.S. Senate has convened to hear the impeachment case presented by House Democrats that former President Donald Trump incited an insurrection at the U.S. Capitol on January 6 in an attempt to overturn the results of the 2020 presidential election, otherwise known as a violent coup d’état.

A divided Senate voted 56 to 44 to proceed with the impeachment trial of former president Donald Trump, rejecting his lawyers’ argument that it is unconstitutional, the Washington Post reports.

Cassidy had previously voted “no” when this question was put to the Senate two weeks ago.

In case you missed it, the video timeline of the January 6 insurrection as presented by the House impeachment managers at former President Donald Trump’s impeachment trial is devastating.

“For former President Donald Trump, the opening day of his second impeachment trial did not go as planned or to his liking,” Politico reports.

“Cocooned at his Mar-a-Lago estate, Trump watched as his defense attorneys responded to an emotional presentation by House impeachment managers with a series of dry, technical and at times meandering arguments about due process and the constitutionality of the proceedings. As they droned on, he grew increasingly frustrated with the sharp contrast between their muted response and the prosecution’s opening salvo.”

New York Times: “Mr. Castor, the first to speak, delivered a rambling, almost somnambulant defense of the former president for nearly an hour. Mr. Trump, who often leaves the television on in the background even when he is holding meetings, was furious.”

“On a scale of one to 10, with 10 being the angriest, Mr. Trump ‘was an eight,’ one person familiar with his reaction said.”

“And while he was heartened that his other lawyer, Mr. Schoen, gave a more spirited performance, Mr. Trump ended the day frustrated and irate.”

Trump lawyer Bruce Castor bizarrely seemed to suggest Donald Trump should be arrested if the allegations at the heart of the impeachment trial are true.

Said Castor: “A high crime is a felony, and a misdemeanor is a misdemeanor. After he’s out of office, you go and arrest him… The department of justice does know what to do with such people. And so far, I haven’t seen any activity in that direction.”

“A constitutional law professor whose work is cited extensively by former President Donald Trump’s lawyers in their impeachment defense brief says his work has been seriously misrepresented,” NPR reports.

Said Michigan State University professor Brian Kalt: “The worst part is the three places where they said I said something when, in fact, I said the opposite.”

Politico: “House Democrats aren’t expecting the sharply divided Senate to convict former President Donald Trump for inciting an insurrection at the Capitol on Jan. 6. They need 17 of the 50 GOP senators to break with the former president — which they know is unlikely. So instead, they’re going to exact as much pain as possible on Republicans, most of whom say the trial shouldn’t even be allowed to happen.”

“House and Senate Democrats may push ahead this week with a censure resolution to bar former President Donald Trump from holding future office over his role in the U.S. Capitol riot, anticipating acquittal in the Senate impeachment trial,” McClatchy reports.

“The reception has been lukewarm so far from Democrats, who would prefer to see the former president convicted in the impeachment trial, and from Republicans, who fear political consequences in barring Trump from office.”

“But a group of Democratic lawmakers may still proceed with the censure resolution this week, hoping to build public support and political momentum for the alternative as the trial proceeds.”

“Washington may be consumed by Donald Trump’s impeachment trial this week, but the White House has a decidedly different view of it: Impeachment? What impeachment?,” Politico reports.

“The Biden team has shut down question after question about where Biden stands on this week’s trial, even with its massive historical, constitutional and political ramifications. On Monday, press secretary Jen Psaki wouldn’t even say whether the president would receive daily updates on the trial’s progress.”

“It’s a remarkable bit of messaging discipline driven by a simple political calculation. Biden’s presidency rests on whether he can drive down Covid numbers, reopen the economy and get kids back in schools. He needs his Covid relief package to do that, not the banishment of his predecessor from future public office.”

“House Democrats will move ahead with a coronavirus stimulus package that would keep the existing income limits for Americans who receive stimulus checks, while tightening eligibility for higher-earning Americans — a major win for progressives,” Politico reports.

“The plan, which was unveiled Monday night, would keep $1,400 stimulus checks flowing to Americans making up to $75,000 a year — rather than the $50,000 threshold that some moderate Democrats had proposed. It would, however, tighten eligibility for those making over $75,000 as an individual — a higher-earning group that previously qualified for smaller checks.”

New York Times: “In just a few weeks, lawsuits and legal threats from a pair of obscure election technology companies have achieved what years of advertising boycotts, public pressure campaigns and liberal outrage could not: curbing the flow of misinformation in right-wing media.”

“Litigation represents a new front in the war against misinformation, a scourge that has reshaped American politics, deprived citizens of common facts and paved the way for the deadly Jan. 6 attack on the Capitol. … But the use of defamation suits has also raised uneasy questions about how to police a news media that counts on First Amendment protections — even as some conservative outlets advanced Mr. Trump’s lies and eroded public faith in the democratic process.”

“The Senate on Monday confirmed Denis McDonough as President Biden’s Veterans Affairs secretary, choosing a non-veteran but a manager with years of government service to lead the sprawling health and benefits agency,” the Washington Post reports.

“Neera Tanden, President Joe Biden’s pick to lead the Office of Management and Budget, apologized Tuesday for her Twitter feuds with Republicans and pledged her role as an ‘impassioned advocate’ would change if confirmed as White House budget chief,” USA Today reports.

“The White House confirmed Tuesday that President Joe Biden intends to keep the U.S. embassy to Israel in Jerusalem, where it was relocated during the Trump administration,” Roll Call reports.

President Joe Biden will eventually invite Donald Trump to the White House for a presidential portrait unveiling, Politico reports.  Trump refused to extend this traditional courtesy to Barack Obama, but Biden will restart it. Said press secretary Jen Psaki: “I have not been given any indication that we would break with tradition in that regard.”

“Embattled Postmaster General Louis DeJoy has told those close to him he wants to stay in his role under the new president, two sources tell CNN, despite his troubled tenure at the helm of the US Postal Service and his background as a supporter and donor to former President Donald Trump.”

An ABC News investigation “into the nearly 200 accused rioters facing federal charges for their alleged involvement at the Capitol — based on court filings, military records, interviews, and available news reports — found that at least fifteen individuals who stormed the building have since said that they acted based on Trump’s encouragement, including some of those accused of the most violent and serious crimes.”

Ron Brownstein: “The quick turn by Biden and congressional Democrats toward reliance on the special ‘reconciliation’ procedure for passing their Covid-19 ‘rescue’ package with only 51 Senate votes underscores their conviction that in today’s highly polarized environment, they are unlikely to secure support for anything close to their plan from 10 Senate Republicans, the number they would need to break a GOP filibuster.”

“Yet by relying on the reconciliation process to pass that priority, Democrats may only raise more questions about whether they should sustain other venerable Senate procedures — including the filibuster and deference to home state senators on judicial nominations — that impede majority rule and provide the minority a virtual veto on many fronts.”

“Though the Senate has trimmed back rules that empower the minority party to block the majority, it has not completely eliminated procedures such as the filibuster, which requires 60 votes to pass most legislation, or the ‘blue slip’ system that has allowed senators from the opposite party to veto judicial nominations in their home states.”

“Three out of every 10 small businesses in the U.S. say they likely won’t survive 2021 without additional government assistance during the coronavirus pandemic, a survey from the Federal Reserve Bank shows,” CBS News reports.

“Considering there are roughly 30 million small businesses in the U.S., that means 9 million small firms are at risk of closing for good this year.”

New York Times: “As the pandemic enters its second year, millions of renters are struggling with a loss of income and with the insecurity of not knowing how long they will have a home. Their savings depleted, they are running up credit card debt to make the rent, or accruing months of overdue payments. Families are moving in together, offsetting the cost of housing by finding others to share it.”

“The Justice Department, as soon as Tuesday, is expected to ask US attorneys appointed by former President Donald Trump to submit their resignations, a turnover expected to spare two top prosecutors in Delaware and Connecticut overseeing two sensitive Trump-era investigations,” CNN reports.

The resignation request is expected to apply to 56 Senate-confirmed US attorneys appointed by Trump.