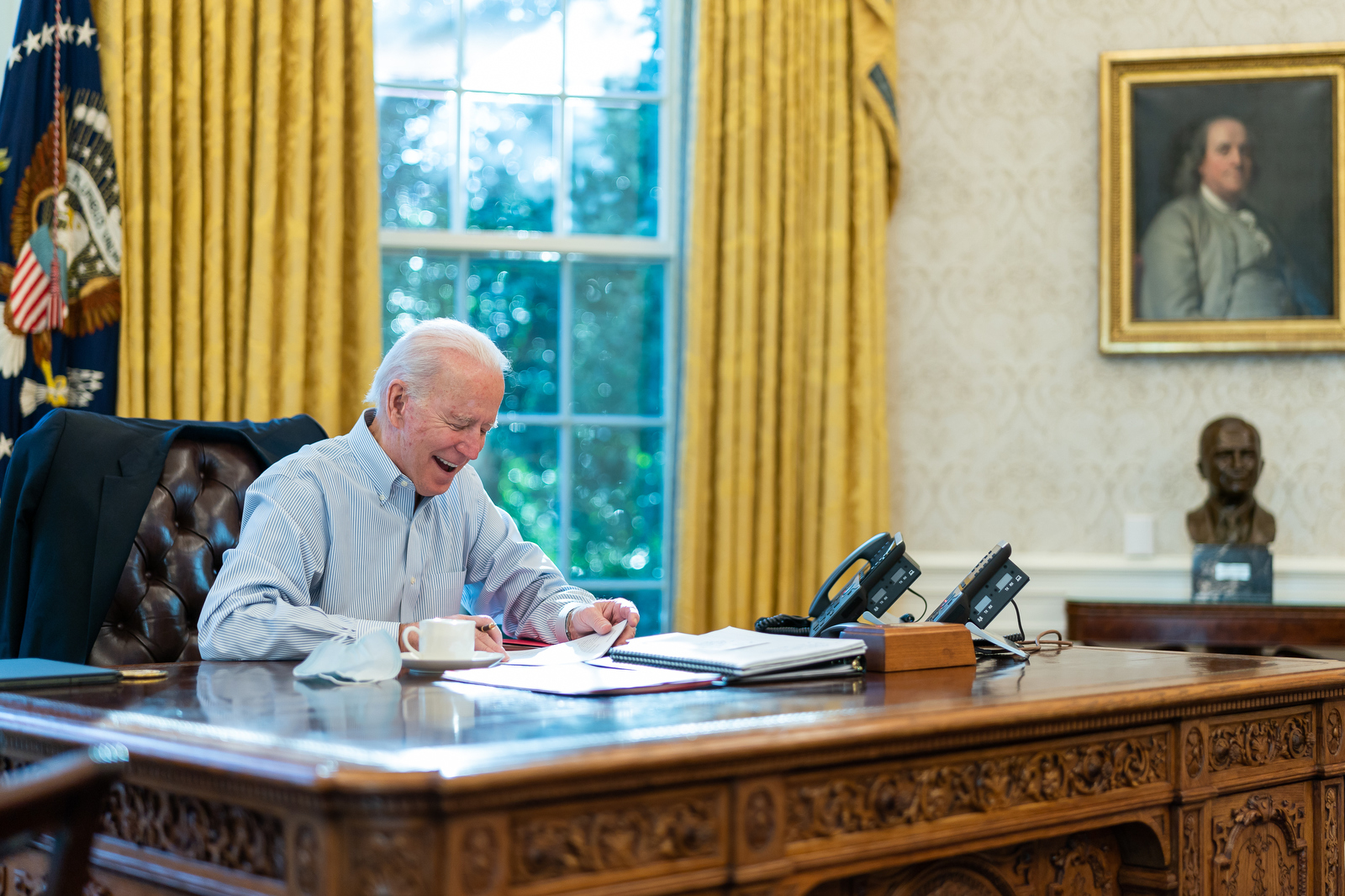 A new CBS News/YouGov poll finds that 83% of Americans favor passing the economic relief package that Congress is considering. Large majorities of Democrats, Republicans, and independents, as well as Americans of all income levels would approve of the stimulus bill.

Gallup: “Americans’ opinions of the Republican Party have worsened in recent months, with 37% now saying they have a favorable view of the party, down from 43% in November. This decline, along with a slight increase in the Democratic Party’s positive ratings, to 48%, gives the Democrats a rare double-digit advantage in favorability.”

“Republicans, long reliant on big business and the rich, see a post-Trump future centered on working class white, Hispanic and Black voters,” Axios reports. “This is a substantial shift, born of necessity and the post-Trump reality. It would push Republicans further away from the interests of corporate America and traditional conservative ideas like entitlement reform.”

CALIFORNIA GOVERNOR — 2018 Republican nominee John Cox launched a $1 million statewide TV ad on Monday to announce that he’d be seeking this office again. The AP reports that Cox will run either if there’s a recall election this year against Democratic Gov. Gavin Newsom or in 2022, when the incumbent would next be on the ballot.

Cox had a long history of electoral defeats even before his 62-38 loss against Newsom last time, including several failed runs for office in Illinois in the early 2000s and an ignored 2008 presidential run, and Republican leaders are unlikely to welcome his return. They probably will be especially unhappy that the wealthy Cox is starting out with a TV spot that also attacks former San Diego Mayor Kevin Faulconer, a Republican who, unlike Cox, has experience winning in competitive areas.

Cox’s spot declares that Faulconer “got the city to overpay for a highrise riddled with asbestos. The deal enriched a campaign donor.” The commercial then takes its shot at Newsom before Cox appears and pitches himself as an alternative to both his rivals.

GEORGIA U.S. SENATOR / GOVERNOR — The Atlanta Journal-Constitution reports former U.S. Senator David Perdue has “essentially frozen” the GOP nomination contest as he deliberates whether to launch a comeback bid to challenge Senator Raphael Warnock.  Perdue is “viewed as unlikely to run,” but that his advisers haven’t dismissed the idea. Indeed, just after the story went live, one of those Perdue advisers confidently tweeted, “He’d clear the field or crush anyone who was dumb enough to run against him in a primary.”

The AJC adds that Kelly Loeffler, who lost to Warnock 51-49, is also considering another try. That doesn’t sit right with former Rep. Doug Collins, who lost the 2020 all-party primary to Loeffler and is considering another Senate bid, too. “Kelly can either be the person whose boredom costs Republicans the Senate twice or become a ‘Jeopardy’ answer that no one will remember the question to,” said Collins’ former spokesperson. Collins has also expressed interest in challenging Gov. Brian Kemp for renomination, but unnamed sources recently said he was leaning towards the Senate race.

MASSACHUSETTS GOVERNOR — On Monday, former state Sen. Ben Downing became the first Democrat to announce a run for governor. Incumbent Charlie Baker has not yet said if he’ll seek a third term next year, but Downing declared that he was in “[r]egardless of what the field is in the Democratic primaries, regardless of if Gov. Baker runs for re-election.” The only other Democrat who has begun fundraising so far is political scientist Danielle Allen, who opened an exploratory committee in December.

Downing was elected to a state Senate seat in the westernmost part of the state at the age of 25 in 2006, and GBH’s Mike Deehan writes that he became “well-regarded by progressives, the Democratic establishment and the energy and environmental advocates he worked with as Senate chair of the utilities and energy committee.” Downing did not seek re-election in 2016, and he soon moved to Boston on the other side of the state and took a job at a renewable energy company.

If Downing won the governorship, he’d be the first Berkshire County native to hold this post since Republican Jane Swift served as acting governor from 2001 to 2003, and the first to be elected since 1901.

ILLINOIS GOVERNOR — Wealthy businessman and Trump megadonor Gary Rabine said over the weekend that he planned to seek the GOP nomination to take on Democratic Gov. J.B. Pritzker, though he stopped just short of declaring his candidacy. Instead, Rabine said he intended to make his announcement in the middle of February.

MINNESOTA GOVERNOR — Senate Majority Leader Paul Gazelka has finally confirmed that he is indeed considering a bid for the GOP nomination to face Democratic incumbent Tim Walz. Gazelka added that he’d be making “some sort of decision this summer.”

“The House Republicans’ campaign arm on Wednesday revealed the list of 47 House Democrats it will target in the 2022 midterm elections, whose results are likely to be determined largely by the popularity of President Biden,” the New York Times reports.

“The National Republican Congressional Committee’s list includes 25 Democrats who were first elected in the Democrats’ 2018 wave election and six incumbents who represent districts that voted for former President Donald Trump in November.”

“House Republicans surprised nearly everyone last November when they almost captured the majority,” Politico reports. “Then they spent January roiled by the deadly attack on the Capitol, confronting a second impeachment of then-President Donald Trump and answering for a whirlwind of offensive conspiracy theories from a firebrand freshman GOP congresswoman.”

“But the National Republican Congressional Committee has landed on a plan to regain the momentum with which it ended 2020: Ignore all that.”

NORTH CAROLINA U.S. SENATOR — Freshman Rep. Madison Cawthorn (R-NC), who has served just over a month in Congress, is already jumping into the N.C. Senate primary race to endorse Mark Walker (R), Politico reports. “The endorsement announcement comes as former North Carolina Gov. Pat McCrory is strongly weighing his own Senate bid, which would make him a strong competitor for a seat that is a must-win for the GOP.”

ARIZONA — A new OH Predictive Insights poll finds that 60% of all Arizona voters are confident Joe Biden won the presidential election, but 20% of independents and 54% of registered Republicans believe Donald Trump is “the rightful winner” of the election.

Said pollster Mike Noble: “Honestly, I was quite surprised, like eyes-fell-out-of-my-head, to see it in Arizona, where I think we have a pretty advanced election system compared to most other states.”

“In the days after the Jan. 6 attack on the Capitol, the phone lines and websites of local election officials across the country were jumping: Tens of thousands of Republicans were calling or logging on to switch their party affiliations,” the New York Times reports.

“An analysis of January voting records by The New York Times found that nearly 140,000 Republicans had quit the party in 25 states that had readily available data (19 states do not have registration by party). Voting experts said the data indicated a stronger-than-usual flight from a political party after a presidential election, as well as the potential start of a damaging period for G.O.P. registrations as voters recoil from the Capitol violence and its fallout.”